Commercial mining of aluminum began in Jamaica in the latter portion of the 19th century. Local use of aluminum products predates mining efforts by nearly a century. It wouldn’t until the 1940s, after the completion of World War II, that the mining industry in Jamaica would begin to fully develop.

Jamaica held the status as the world’s leading bauxite producer until 1971, when Australia took the mantle away. Higher-grade bauxite was found in other deposits around the world as well, which reduced the demand for Jamaican bauxite.

As of today, Jamaica is currently the sixth-largest producer of bauxite through the efforts of the local mining industry.

#2. Since the island nation gained independence, the economic influence of mining has gradually reduced. In 1962, the GDP contribution of the mining industry was 10.3%. In 1982, it had fallen to 5.9%. (Jamaica Trade and Invest) 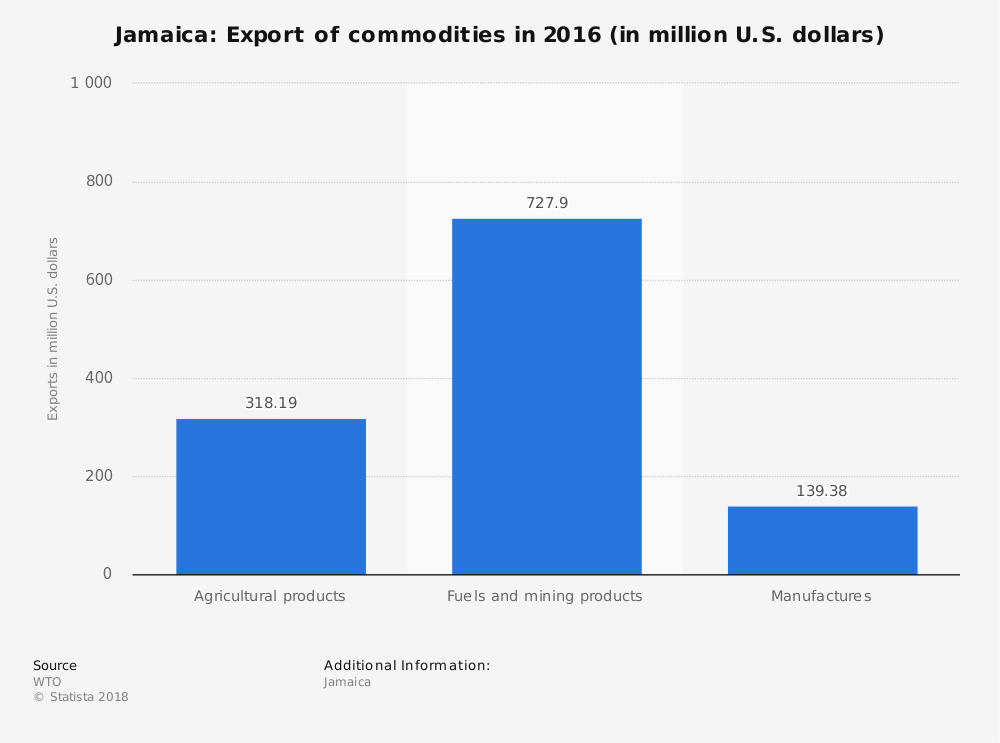 #3. Total bauxite production levels by the Jamaica mining industry reached 14.9 million tons in 2006, which was the highest levels produced since 1974. (Jamaica Trade and Invest)

#5. Exports from the Jamaica mining industry total about $1.2 billion per year. Mining exports account for almost 60% of the total export value achieved by the country each year. (Jamaica Trade and Invest)

#6. Bauxite plants in Jamaica are currently operating at 91% capacity. The lowest capacity utilization experienced by the industry in the past 20 years occurred in 2004, after Hurricane Ivan struck the island. Even then, 74% of the total capacity was used. (Jamaica Trade and Invest)

#7. Over 90% of the firms involved with the mining industry in Jamaica are locally and independently owned. Just 15% of the firms are classified as being either medium or large businesses, producing a minimum of 500,000 tons each year. (Jamaica Trade and Invest)

#8. The Jamaica mining industry has 0 firms operating under world-class definitions, which would require the production of 4 million tons annually. (Jamaica Trade and Invest)

#9. The share of global bauxite output for the Jamaica mining industry has fallen from 18.1% in the 1970s to 7.1% in 2008. More than 200 million tons of bauxite are now produced globally. (Jamaica Bauxite Institute)

#10. As of 2012, about half of the mining capacity available to the industry is still closed to production. Total output for the industry continues to hover around the 10 million ton mark each year. (Jamaica Bauxite Institute)

#11. In 2017, the mining sector in Jamaica experienced 15% growth over the year before for the first time in more than three decades. Refinery capacity increased in the country as well, rising from 1.65 million tons to 2 million tons. (Jamaica Information Service)

#12. Jamaica is currently ranked #67 out of 190 countries that were rated for ease of investment and available opportunities. In the Latin America and Caribbean region, however, Jamaica is ranked third. (World Bank)

#13. 60% of the costs associated with bauxite mining and refinement in Jamaica are associated with the smelting stage. Because it requires high levels of electricity availability, the industry is generally unable to provide this step, which limits the availability of desired exports from other nations. (Bank of Jamaica)

#14. 22% of the world’s bauxite reserves are believed to be located in the Caribbean, with more than 2 billion tons believed to be available to the Jamaica mining industry. With current production levels, those reserves are enough to provide over 100 years of mining development and employment. (Bank of Jamaica)

#17. Jamaica’s exports to the United states were valued at $421 million in 2013. In 2012, the value of exports was estimated at $507 million. About 30% of the exports to the U.S. from Jamaica come from bauxite and alumina. Another 17% comes through coal and similar fuels. (U.S. Geological Survey)

With a national minerals policy instituted in 2014, plans are in place through the year 2030 to improve the impact the Jamaica mining industry provides. Even after 5 decades of extensive mining efforts, there are still large quantities of bauxite available for use and export.

Much of the new bauxite reserves found by the mining industry in Jamaica coincides with heavy volumes of limestone, which creates new export opportunities to North America as well.

In 2013, the Parliament passed 11 legislative items that were designed to support economic growth within the industry as well. This included a simplification of the tax system, as well as a broadening of the local tax base. These changes are just beginning to have an effect on the economics of mining on the island.

For the industry to be competitive on a global scale, there must be investments made into the sector. Foreign direct investment could play a positive role here, helping the industry to modernize more rapidly than expected. Even without FDI, however, sustainable development practices are in place to eventually return Jamaica to the top when it comes to bauxite production.