Sharing borders with several countries in Southeast Asia, Thailand is one of the world’s leading producers of rice. More than 51 million hectares of land are found within the country, with more than 30% of that space cultivated with annual crops. About 7% of the land is cultivated with permanent crops.

Because of this structure, much of the economy activity experienced in the country is still based in rural areas. Two out of three people in Thailand live in a rural area where agricultural work is the primary source of employment.

#1. Revenues for the Thailand rice industry are expected to reach $7.75 billion in 2018, with the industry growing at a rate of 2% each year. (Statista)

#2. The per-person revenues generated by the rice industry in Thailand are $111.54, according to figures released in 2018. (Statista) 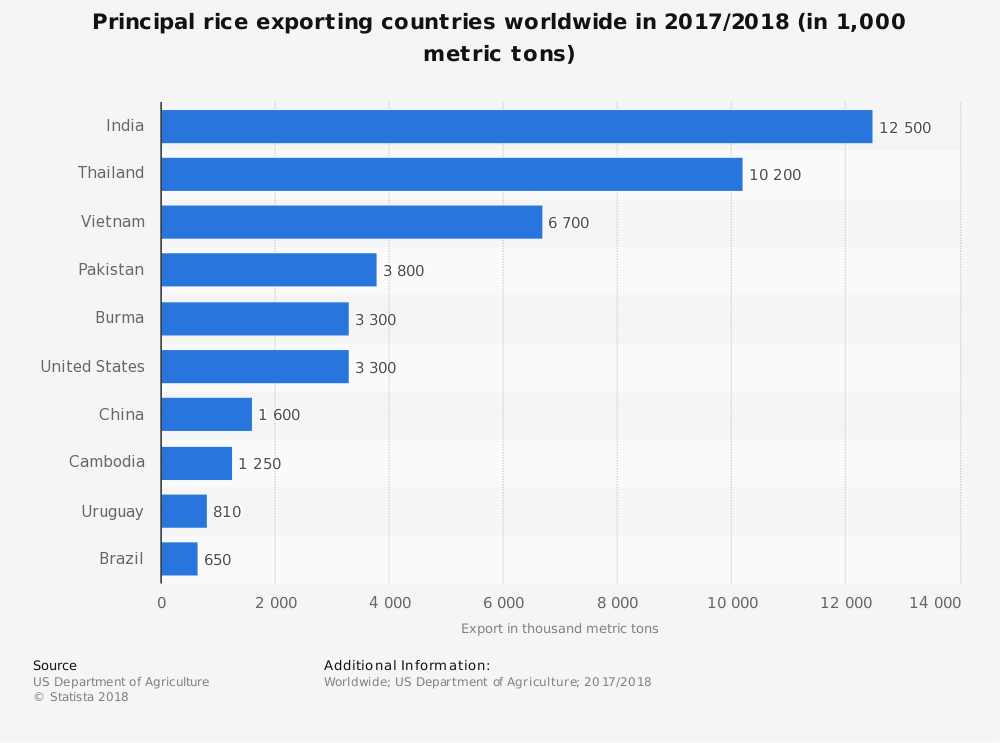 #3. The average person in Thailand will consume over 102kg of rice over the course of a year. (Statista)

#4. The per capita caloric intake in Thailand that comes from rice consumption stands at 46%, or 1,300 kcal per day. In comparison, wheat consumption with the average diet makes up just 4.1% of the total caloric intake. (Ricepedia)

#6. Rice yields have remained constant for nearly a decade in Thailand, with the average farm able to produce about 2.9 tons per hectare. (Ricepedia)

#7. Most of the rice that is produced in Thailand comes during the wet season, but there is a dry season harvest for the industry as well. About 500,000 hectares are planted for dry season harvests each year. (U.S. Department of Agriculture.

#8. The total monthly value of exports in 2018 for the Thailand rice industry has been about 14 billion Baht. That is on an average export quantity of 900,000 metric tons. (Thai Rice Exporters Association)

#12. Jasmine rice accounts for about 40% of its total annual exports in milled base, reaching 8 million to 10 million tons each year. (Nikkei Asian Review)

#13. A stronger currency in Thailand has also affected the rice industry. In 2017, it rose over 9% in value against the U.S. dollar, which is a trend that continued into 2018. (Nikkei Asian Review)

#14. The overall rice paddy acreage found in Thailand has dropped by more than 10% since 2013. In 2018, around 58 million rai (1,600 square meters are equal to a rai) were planted. In the previous period, over 65 million rai were planted. (Nikkei Asian Review)

#15. In 2017, Thailand was the second-largest exporter of rice, with India outpacing the industry by more than 2.5 million tons. Vietnam comes in third, with 6.3 million tons of rice exported for the year. (Nikkei Asian Review)

The rice industry in Thailand has struggled to see growth in recent years, but an improved global economy is changing that trend. Export levels are rising for the Thai rice industry, which will filter down to more local economic activity in the plentiful rural areas of the country over time.

This has caused the amount of acreage that is planted and harvested by the industry to slowly increase, though it is still far below its peak in the 1990s. The global trend has been slightly downward for farms as more people have moved into urban areas. Thailand is one of the few nations that is bucking this trend.

Assuming that economic conditions remain relatively constant, expect the industry to have a 3% pattern of annual growth through the next decade. If the economies of Southeast Asia continue to improve, this annualized growth could reach 5%.

There is always a threat that weather conditions may become unfavorable, spoiling a season or two. The production of premium rice in 2018 is evidence of this. The good news is that with a recovery in the next season, the industry should be able to continue righting itself.