The Singapore petroleum industry is continuing to grow its influence on the global stage in terms of energy production and exports. It is home to one of the world’s largest energy trading hubs and the world’s third-largest oil refining center. Combined with the financial services sector in the country, Singapore gained enough influence to become a 2016 member of the International Energy Agency.

Oil exploration and production is an industry in Singapore that outdates the current government. The first facilities in the region were constructed in 1891. Now Singapore sits as a Top 100 producer of oil in the world today.

#1. In 2017, the value of the Singapore oil and gas industry was $77.1 billion. In just two years, the industry has seen more than $10 billion in total value added to it. (U.S. Department of Commerce)

#2. From 2015 to 2016, local production levels decreased from $50 billion to $43 billion. Total exports were about $8 billion less for the industry than total imports received. (U.S. Department of Commerce) 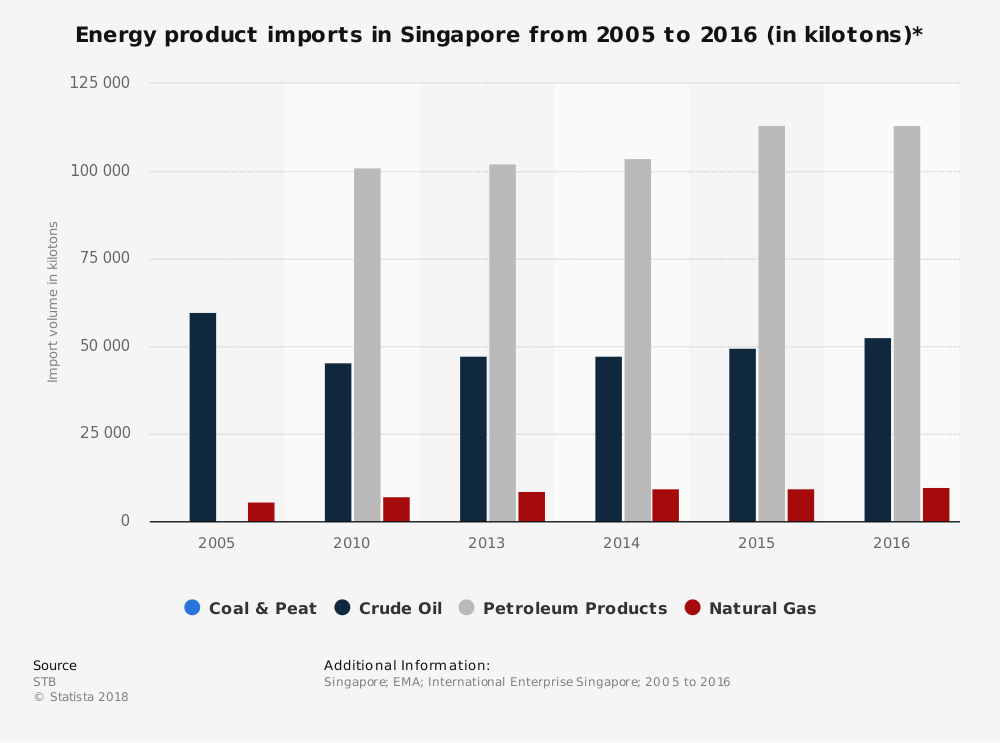 #4. Petroleum products account for 65% of the imports that occur within the Singapore petroleum industry and 98.8% of the energy exports. Crude oil accounts for the other 1.2% of industry exports. (Energy Market Authority)

#5. More than 47,000 GWh of electricity are consumed in Singapore each year. Over 87% of the consumption comes from industrial-related causes. (Energy Market Authority)

#6. In 2014, there were about 5,100 workers that were associated with the power sector in Singapore. 95% of the employees within the industry were residents of the country. (Energy Market Authority)

#7. In 2010, more than 20% of the fuel products that were used for electricity generation in Singapore came from petroleum products. In comparison, over 77% of the fuel came from natural gas. (Energy Market Authority)

#10. 70% of the companies involved in the Singapore petroleum industry say that they will either maintain or increase their capital spending throughout 2018. When the same question was answered in 2017, only 26% of companies made the same claim. (DNV GL)

#11. Despite the confidence, only 52% of companies within the industry say that they plan to maintain or increase job opportunities within the sector. Globally, the standard for petroleum companies and increasing employment is 62%. (DNV GL)

#13. The Singapore petroleum industry is a global engineering hub for rig building. About 70% of the global market for oil rigs is based in the country. (Swedish Trade and Invest Council)

#14. Singapore offers a crude oil refining capacity of 1.5 million barrels per day, with a majority of this capacity coming from just 3 refineries. The utilization level of this capacity is currented rated at 86%. (Swedish Trade and Invest Council)

#15. Most of the oil and gas activities which occur in Singapore are located on Jurong Island. Nearly all of the almost 100 leading oil, gas, and petrochemical companies located in Singapore have a location on the island. (Swedish Trade and Invest Council)

Singapore’s limited space creates a unique challenge for the local petroleum industry. When combined with a push to eliminate petroleum products as part of the fuel mix for electricity generation, small adjustments create large changes in the outcomes that are possible for the industry.

The industry itself is a best-prospect industry for the nation, with its strategic location and financial sector encouraging trade. Several opportunities for new investment, including sinking and boring equipment, drilling information systems, and mud logging units, offer new avenues for growth to consider in the coming years.

With new projects on the horizon, even with the recent industry downturn, the Singapore petroleum industry is expected to grow at a rate of 2% per year over the next decade. The discovery of new reserves could push this figure even higher.