Augmented reality, or AR for short, is an interactive experience which combines real-world experiences with a computer-generated augmented display. This creates a combined sensory modality for the consumer, where technological impulses combine with real-world senses to create a combined, constructive experience.The first augmented reality system was designed for the U.S. Air Force in 1992. Since then, it has developed in several different directions, creating gaming experiences, meeting organization assistance, and training protocols.

To create an augmented reality experience, numerous products must be used simultaneously by a user. Hardware components include an input device, sensors, a display, and a processor. When using a smartphone to play an AR game, like Pokémon Go, these elements include a MEMS sensor and the device’s camera.

Future applications for the augmented reality industry may include literature, architecture, visual art, and emergency management.

#1. The value of the augmented reality gaming is expected to reach almost $285 billion by 2023. If achieved, that would represent a CAGR of 152%. (Infoholic Research)

#2. Pokémon Go is a leading consumer product for the augmented reality industry. It has been downloaded more than 750 million times globally, bringing in a total annual revenue of more than $1.2 billion. (Infoholic Research) 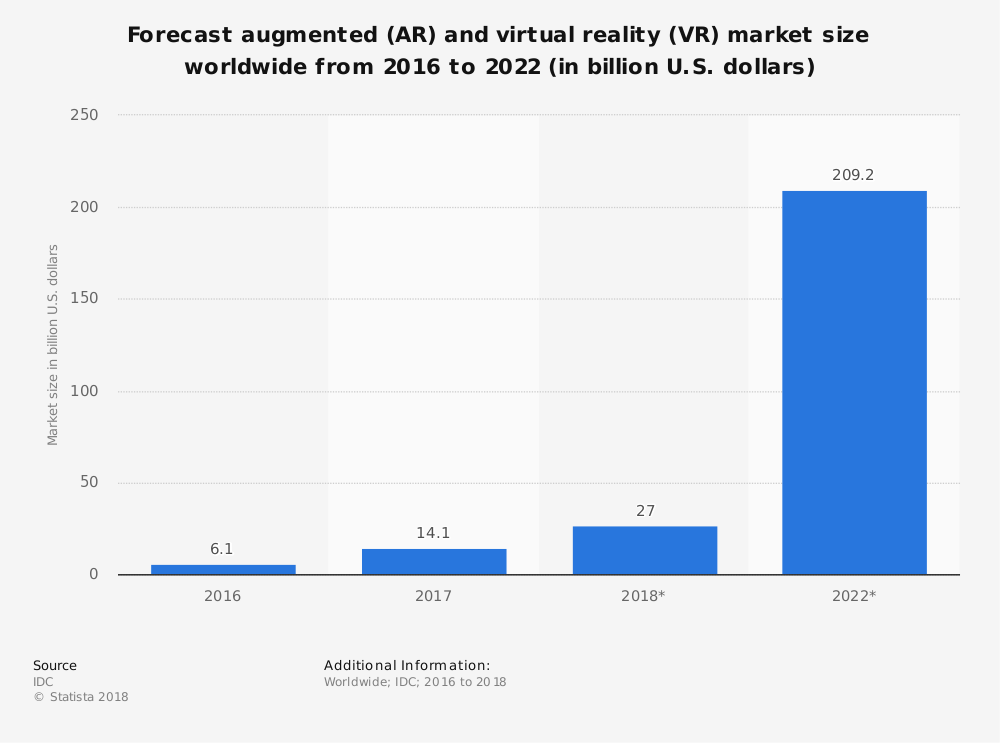 #3. More than 40 million Americans are expected to use an augmented reality product at least once per month over the next year, which reflects an increase of 30% from the year before. (Information Systems Audit and Control Association)

#4. In 2016, 73% of Americans said that they knew of augmented reality products and the Internet of Things. That is decline of 10% from the number of people who said they were familiar with the industry from the year before. (Information Systems Audit and Control Association)

#5. Up to 70% of consumers say that they can see the benefits of using augmented reality products every day. 69% of consumers believe that AR products will help them learn a new skill. 62% say that AR can help them with their shopping errands or healthcare needs. (Information Systems Audit and Control Association)

#7. More than 1 billion people are expected to use augmented reality products globally in 2020. More than 1,300 start-ups are currently operating within this global industry right now, with an average valuation of more than $5 million. (Angel List)

#8. In 2016, the total value of the augmented reality industry was $2.39 billion. Worldwide shipments of augmented reality products reached 64.8 million units, with 5.4 million AR glasses being shipped. (Markets and Markets)

#9. The device market for the augmented reality industry is expected to have a value of $1.8 billion, when combined with figures from virtual reality devices. (CCS Insight)

#10. The largest single segment of the AR industry for consumer spending is in hardware, accounting for 15% of total costs. Games account for 11.7% of industry revenues, when AR and VR are combined. Another 3% comes through onside assembly tasks and general safety instruction. (IDC) 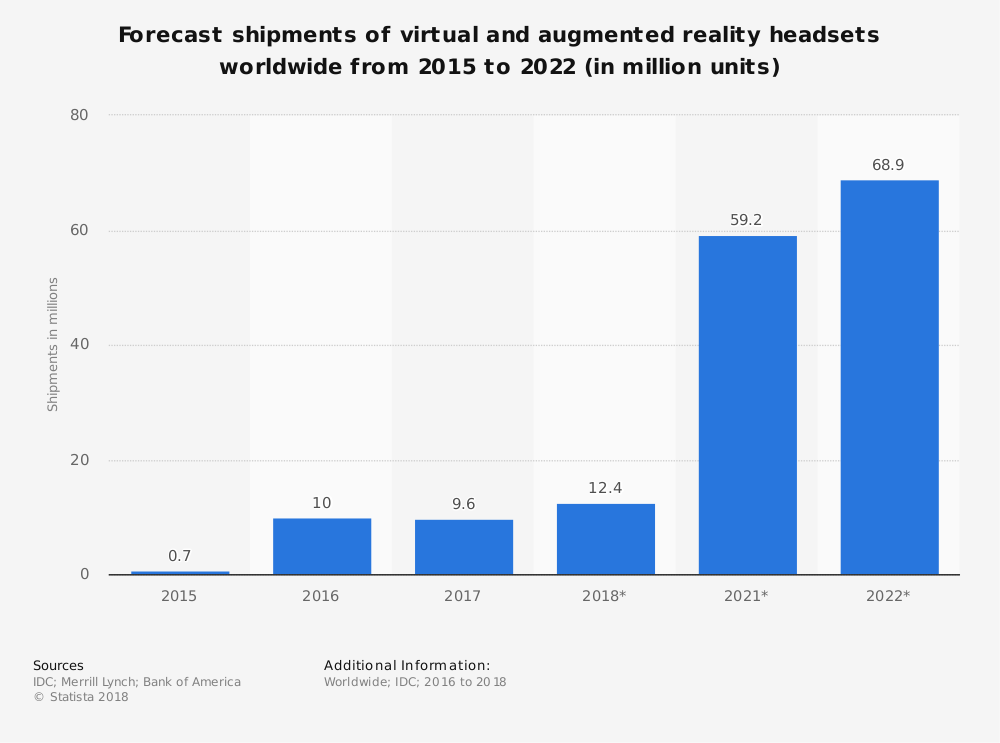 #11. 59% of consumers expect the gaming sector to benefit the most from augment reality technologies in the next year. Education came in second (26%), followed by medical devices (26%), real estate (21%), and marketing (20%). (Perkins Coie)

#12. About 70% of media planners and buyers are wanting more AR and VR advertising products incorporated into their next digital marketing campaigns. (Vibrant Media)

#13. 88% of firms with annual revenues of at least $100 million are using elements from the augmented reality industry in some part of their business right now. (Deloitte) 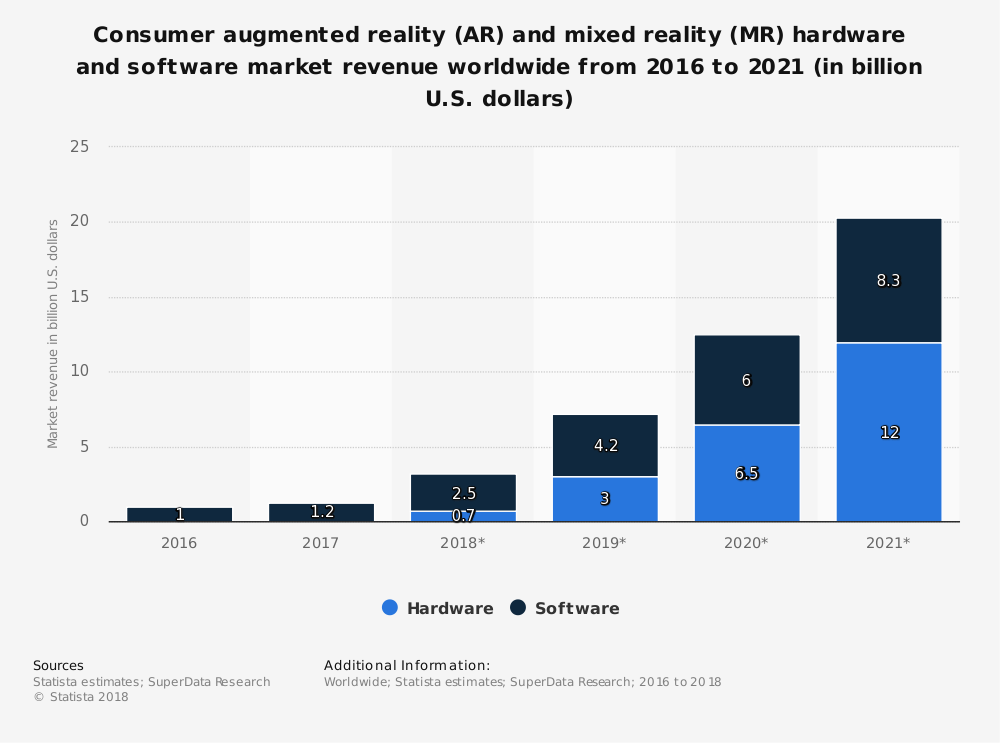 In 1968, the first headset to display wireframe drawings was introduced by Ivan Sutherland. The industry would receive its name in 1990 thanks to a researcher at Boeing named Tom Caudell. Despite this history, the AR industry is still in its infancy. Many of the applications are still game-based in the consumer market. There is a lot of potential here for growth.

There is also a lot of potential for failure. Emerging technologies may offer a better solution than what is currently on the market. It is not a guarantee that consumers will actually embrace the industry or its products. One only needs to look at the failure of the HD DVD from Toshiba to see that a similar event could happen here.

We are at a stage where AR and VR could come together. They might also go in separate directions. When developers are able to begin fully maximizing the potential of this technology, then develop products which consumers wish to have, the full potential of augmented reality will be realized.

Until then, keep looking for small success stories, like Pokémon Go, and the various clones that are available for download to keep boosting industry revenues.