The Tipping Point is a 2000 book by Malcolm Gladwell, based on research he did as a journalist. In the book, he describes his theories about how ideas, like biological epidemics, spread through societies and why they behave the way they do.

#1 The Three Rules of Epidemics
The main thrust of this book explores how ideas – whether they are trends, laws, or social thoughts – spread throughout society. Gladwell discovers that ideas can spread just like real-world biological epidemics, and so goes over the three rules of epidemics to see if they match up with how ideas morph and spread throughout the world.

#2 The Law of the Few
The first rule of epidemics broadly states that they are started by only a few people rather than many. It only takes a few individuals in the areas or demographics to give a virus or idea the reach it needs to spread quickly throughout a population. If an idea or disease doesn’t infect the right people, it won’t spread it no matter how virulent its other attributes are.

#3 The Stickiness Factor
The second rule of epidemics describes how successful viruses and ideas must both be “sticky” – that is, they have to be attractive or virulent enough to attach themselves to lots of people in rapid succession. An idea does not have to be traditionally attractive to the appropriately sticky. It just needs to be memorable enough that it remains in the minds of the public or key individuals long enough to spread to others.

#4 The Power of Context
The third rule of epidemics is that the context of an environment is what truly allows an epidemic, either biological or abstract, to spread. His famous example follows the reduction in crime in New York City. As police agencies made decisions to tackle smaller crimes with much greater vigor than before, the criminal “context” of the city decreased, and it became safer over time.

#5 Connectors, Mavens, and Salesmen
Gladwell identifies these as the primary category of people responsible for spreading ideas. They are the “few” described in the first rule of epidemics. Such people have an inordinate amount of social weight when developing new trends or spreading ideas. Modern examples include influencers and celebrities, especially with the advent of the Internet.

#6 Small Things Are Important
This is perhaps the single greatest take away from this book. Whether it’s about the individuals responsible for spreading ideas and epidemics, the power that small contextual changes in an environment can have, or how minor alterations to a tv show can cause it to become inordinately sticky, Gladwell makes a convincing case that minor things can have huge ramifications if they reach the tipping point.

#7 Tipping Points Don’t Arise in a Vacuum
Although Gladwell makes it seem as though brought shifts in human behavior and social organization can change in an instant, he also makes it clear that tipping points are only reached after there are enough factors in place to allow for the spreading of an epidemic. In other words, tipping points are only reachable when enough pressure beneath the surface has built up to allow for an explosion.

#8 A Small Number of People Do Most Work
This is very similar to the 80/20 rule in some cases. Gladwell proposes that, for epidemics, a small number of people do the vast majority of the work when it comes to spreading the idea of disease around a population. Most of the people in a society or culture are just carriers, who passively spread the epidemic around without much effort.

#9 Small Pieces Can Grow
The book discusses the tendency for products or ideas to gain traction over time, especially when they pile upon one another. An easy example given is internet blog posts. When a blogger starts, they may not have a very big audience. But as they post more and more, they gain an audience and their previous articles become more and more important. An audience is built over time.

#10 Once Tipped, an Idea Spreads Like Fire
In a way, Gladwell explains, reaching the tipping point is the hardest part of any epidemic’s life cycle. Once the theoretical tipping point has been reached, the idea or epidemic will spread like wildfire without much further work. This means that, if you intend to create a tipping point for a product or social media push, you should focus most of your effort on reaching that tipping point.

#11 The Things Needed for a Tipping Point May Be Obscure
Finding the right combination of factors to make an idea or product properly sticky for the target demographic is not easy. You’ll need to look at things creatively and think outside the box in order to determine the right context and stickiness factors to purposefully reach a tipping point.

#12 People Are Not Controllable
The Law of the Few is the one factor of the tipping point epidemic that is not truly in your control. You can do all you can to spread your idea to the right connectors, mavens, or salesmen, but you’ll eventually have to wait for these people to handle your idea or product themselves.

#13 Epidemics Burn Out
Another conclusion that Gladwell draws from his myriad examples is that all epidemics eventually burn out. No matter how sticky the idea or how great the context is for an epidemic, it’ll eventually become stale and leave the minds of most of the population. This is natural, so fighting it is unnecessary.

#14 The Length of Epidemics Varies
However, each epidemic is unique and may last longer or shorter than you might think. You can extend the length of epidemics by making them even stickier or by changing the context around their introduction.

#15 Epidemics Can Come Back
Gladwell also states that epidemics can return given the right conditions and enough space in between “outbreaks”. This somewhat describes how reboots of popular movie franchises return again and again with some years between each series or installment.

Top 10 Quotes from The Tipping Point 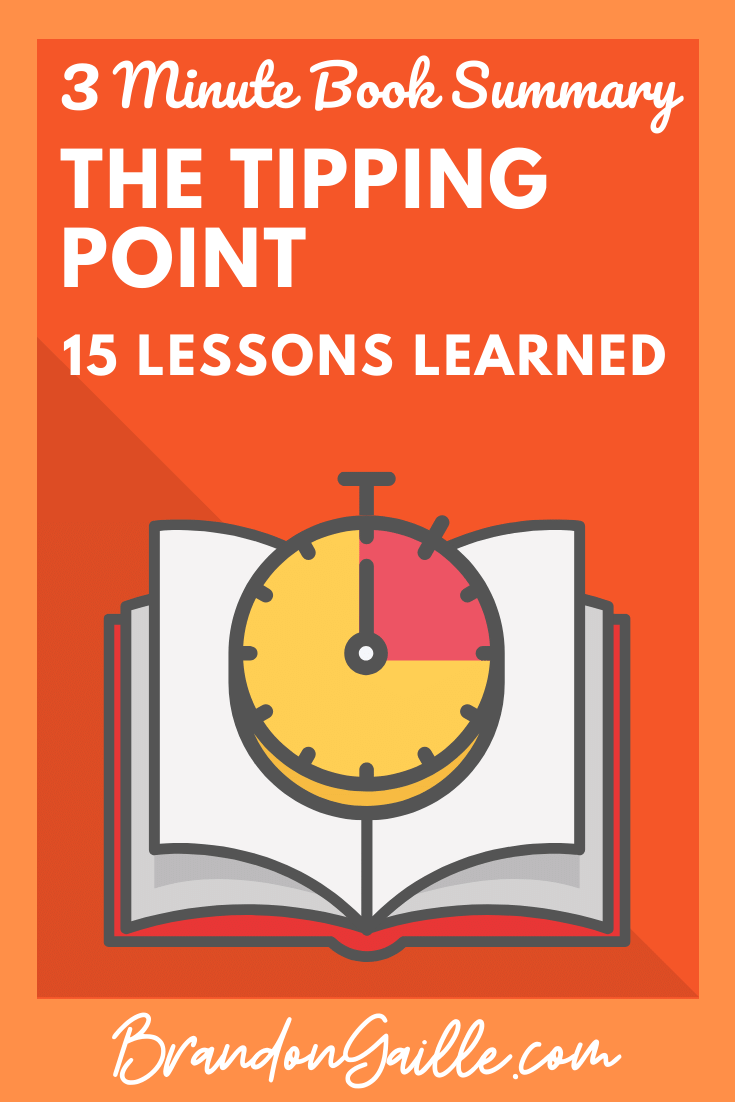