The Power of Habit: Why We Do What We Do in Life and Business was first published in 2012 and was written by Charles Duhigg, a New York Times reporter. In its pages, you’ll explore how habits are formed and how they can be broken, granting you greater control over the automatic processes that dictate much of our daily lives.

#1 The Habit Loop
By far, the biggest take away from this helpful book is the concept of the “habit loop”. Put simply, the habit loop is composed of cues, routines, and rewards. By creating a habit loop using these three elements, you’ll be able to automatically form and adhere to habits without thinking of them or opening yourself up to avoid them. Train yourself to notice particular cues, which then trigger routines and bring you rewards.

#2 Cue Categories
Naturally, the categories of cues are another big take away. There are five main categories of cues: location, time, emotional state, other people, and the action immediately preceding the cue. Recognizing what cues you currently have in your life and how to seek out or avoid them is critical.

#3 Keystone or Foundational Habits
Some habits can help you build new ones by providing a foundation of victory and success that you can draw motivation from. Keystone habits are usually small and result in a “win” for you, which snowballs into greater habit formation and control. As an example, dieters who keep a food journal are more successful at losing weight.

#4 Plan for Pain
The Power of Habit also talks about the importance of planning for pain. Thinking about the difficulty and struggle you’ll face when forming a habit or quitting a bad habit can help you be prepared when the pain inevitably rolls around. If you write out a plan about what you’ll do when pain comes knocking on your door, you’ll be more successful at withstanding that pain.

#5 Craving
This is the secret fourth component of the habit loop. A craving, defined by this book, is the anticipation of reward. It’s important to be aware of any cravings you have in your life as they can hijack or start a habit loop early, making it more difficult to quit bad habits. The book talks a lot about dopamine rewards and how your brain is wired for craving.

#6 Repetition and Automation
The book talks a lot about repetition and automation and how it affects more of your day-to-day life then you might be aware of. The truth is that most of what we do is at least partially automated. Hijacking this tendency of our brain to set certain activities on the back burner can help us form healthy habits that we don’t even need to think about.

#7 Freedom is Important
The book makes it clear that there’s no single way to achieve good habits and quit bad habits. The book focuses on providing you with a framework necessary to recognize the habits you have and learn how to create helpful habits. In fact, it also states that it’s important that everyone uses the freedom they have inherently to devise a plan for habit building and breaking that works perfectly for their situation.

#8 Manipulate the Craving
One trick that might work for you when it comes to breaking bad habits is to not ignore or resist a craving a bad habit cue, but to instead change it. As an example, if you have a bad habit of eating sugary food, you can recognize the cue or craving that leads to eating doughnuts and instead teach yourself to immediately exercise after experiencing that craving. Your brain will eventually get used to the positive endorphin spike you get from exercise and you’ll never have to flat out ignore a craving.

#9 The Crowd is Important
The Power of Habit also makes note of the fact that the people you surround yourself with can affect your success in forming or breaking habits. You must surround yourself with those who are also trying to form the same habit or trying to break a bad habit. People who aren’t on the same track can tempt you the other way or make you reluctant to follow through.

#10 Personal Responsibility
In league with the above take away, the book also notes that personal responsibility is critical for changing any habit and improving your life. You must get into the habit (pun intended) of taking responsibility for your bad actions. Don’t say it isn’t your fault; lean into the difficulty and face the challenge head-on.

#11 Changing Routine is First
Whenever you’re trying to break a bad habit, it’s most important that you change your routine before you attempt anything else. A routine is filled with all sorts of psychological cues that you may not even be aware of which can trigger a craving or bad habit. Changing your routine is the best way to alter your environmental stimuli.

#12 Willpower is Just Like Any Muscle
The book makes a point that your willpower is just like any other muscle you might train. Though it might start off like an unused bicep, it will eventually grow stronger and formidable the more you exercise it. Put in other words, forming and breaking habits will become easier the more you consciously do it.

#13 Practice Makes Perfect
This seems obvious, but it’s important to cogitate that habit breaking and forming does not happen overnight. Instead, it occurs incrementally with many smaller actions piling up on one another over and over.

#14 Habits Are Never Erased
This is both good and bad news. On the plus side, good habits never truly disappear and are easy to maintain. Bad habits, of course, are infamously difficult to get rid of. But just being aware of this truth can help you control which habits exert influence over your life.

#15 Trust in Your Good Habits
Believing in yourself is crucial for any self-improvement process, and habit-forming and breaking is no different. If you don’t yet believe in your own willpower, believe in your good habits. After all, your brain will automatically follow them if you let it!

Top 10 Quotes from The Power of Habit

Go here to download The Power of Habit PDF Summary.

Charles Duhigg Discusses How to Create a Habit 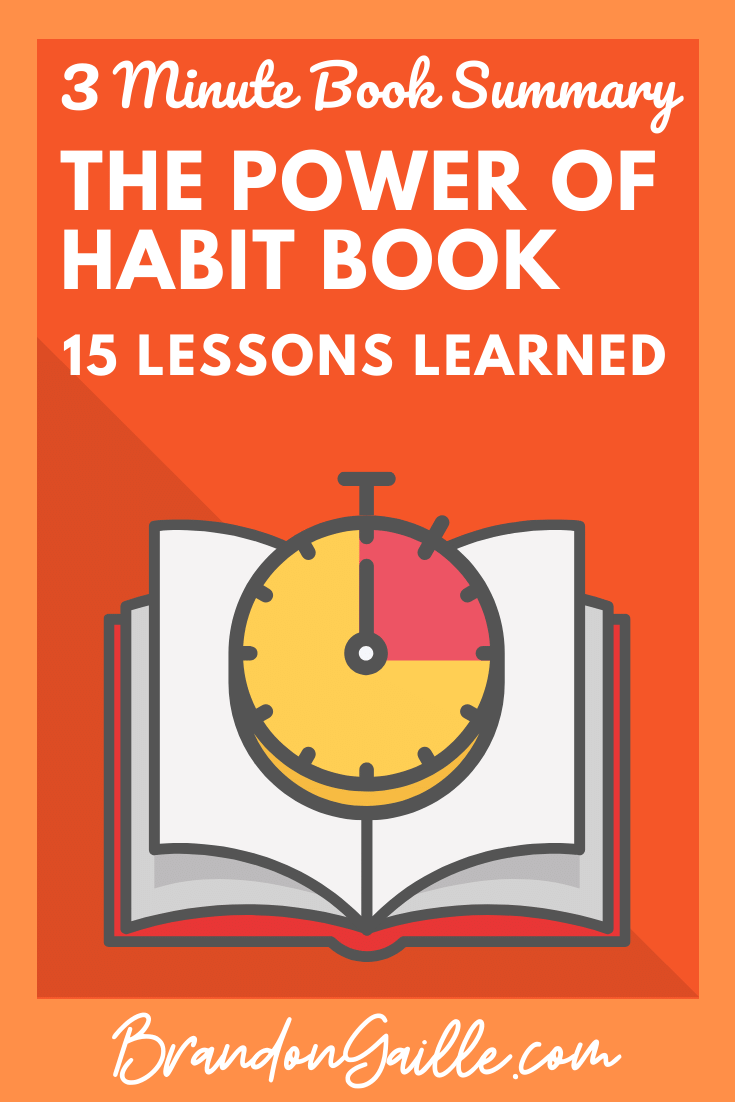