Outliers: The Story of Success is a 2008 book by journalist and author Malcolm Gladwell. In this book, Gladwell dives into what makes the most successful people so good at what they do and discovers the commonalities they have which provided them with opportunities to succeed.

#1 Success Comes From Lots of Factors
More than any single idea, Gladwell presents the concept that individual success is the result of multiple factors mingling and mixing together to form a perfect storm of circumstance and talent. One individual cannot be overly successful just because of their grit and determination. Nor can they be fantastically successful just because of their environment or upbringing. You need lots of things going right to produce a person of phenomenal success.

#2 10,000 Hours
This isn’t to say that personal preparation and practice are not important. Gladwell reiterates the common idea that you need 10,000 hours of experience with something before you can become an expert in that field. This is not only an anecdote passed down between cultures but also scientifically valid.

#3 Love What You Do
Naturally, most of us will be more willing to put 10,000 hours into a single subject or skill if we love that thing. Thus, you must discover what you love to do and focus as much of your time as you can into that subject or skill if you want to become an outstanding success in the field of your choosing.

#4 Know Your Own Culture
Gladwell presents a startling example of airline pilots, accidents, and the cultures that different ethnicities of pilots came from and how all of those factors can affect airline safety. Knowing your culture, in terms of its limitations and its advantages, can help you become more successful. In addition, some cultures are more predisposed to produce successes in certain fields or subjects than others.

#5 Embrace Your Culture
Because we’re all embroiled within our culture from the moment we are born, it might be a good idea to follow your heart so long as your own culture fosters skill development within that interest. Gladwell uses the development of the clothing business in New York City, developed by East European immigrants, as an example of how culture played a role in their success.

#6 Success is Partially Based on Luck
In order to obtain the number of hours necessary to become an expert and in order to have a culture that nurtures your interests, you must be incredibly lucky compared to everyone. These are the titular “outliers”: those who were born at the right place and the right time to have an interest that led them to riches and greatness and the culture and aptitude to pursue their expertise to its conclusion.

#7 Early Success Leads to Later Success
Gladwell also notes that those who start early in their passion or expertise tended to become more successful than those who begin late in life. The effects of success and of practice are cumulative. It’s important to develop your skills early on and, if you have kids, facilitate their interest as much as possible to give them the best shot at their maximum potential.

#8 Small Things Lead to Big Repercussions
Gladwell uses the example of Chinese numbers being comparatively brief compared to English numbers. Because of this minor difference, Chinese people can recite seven digits more easily than English speakers and can theoretically perform arithmetic and excel at math more consistently. This small difference between languages may explain the huge cumulative advantage that many Chinese students have over many Western schoolchildren.

#9 Practical Intelligence
The book makes a distinction between two types of intelligence: practical and analytical. The latter is what is tested by IQ exams and is what normally is prized by society. But practical intelligence, otherwise known as street smarts, is also important for those who want to become successful. Having a lot of practical intelligence will help you avoid social blunders and help you maximize social opportunities.

#10 Cultural Legacy Persists
Whether you want to admit it or not, the legacy of your culture plays a huge role in who you are and your levels of success. Thus, cultural legacy and what we leave behind is even more important as it persists through many generations.

#11 Talent Matters
Although the 10,000 hours mentioned earlier are the key to becoming an expert in any field, everyone must also understand that you have to have some natural aptitude to become a success in any field or ability. If you are terrible at playing the violin, 10,000 hours of practice won’t make you good enough to play in the best orchestras or best concerts.

#12 Opportunity is Exponential
The good news for those who have the talent and time to make the most of their skills is that opportunity is exponential. Earning your initial successes and opportunities is much more difficult compared to once you have some achievements under your belt. This same concept is reflected with wealth; those who become rich find it easier to make money than those who are not already wealthy.

#13 Fulfillment
There are three main factors that your work or vocation must give you in order to feel fulfilled in your life. The first is autonomy, or personal freedom to at least a certain extent. It must also be complex enough to provide you with an adequate physical or mental challenge. Lastly, your vocation or work must incorporate a clear connection between your efforts and any possible rewards.

#14 IQ Doesn’t Guarantee Success
Having a high analytical intelligence does not necessarily mean you’ll be successful in your life. Instead, those who want to become astronomical successes must also cultivate social smarts and talent; raw intelligence is not enough of a crutch for most.

#15 Outliers are Rare
Finally, many of us may wish to be outliers in order to obtain the rewards we associate with them. But outliers are by definition rare. So Gladwell advises those who would be disappointed to count their blessings, particularly as many outlier successes have difficult childhoods. 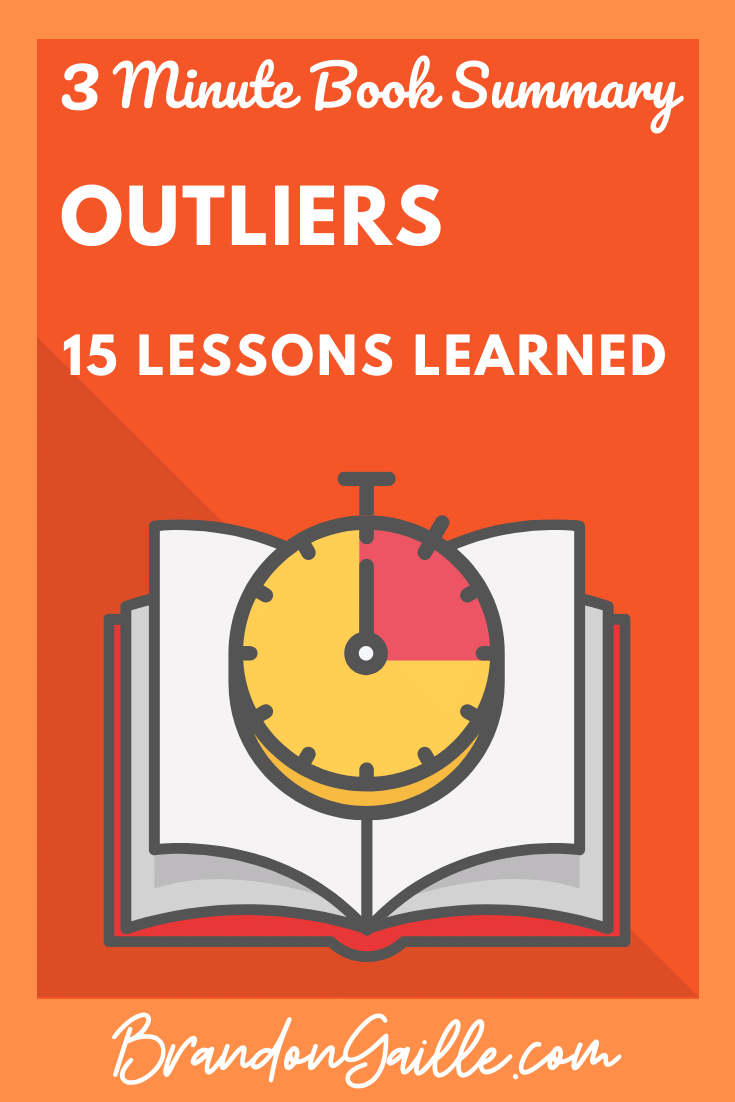