Home » Featured » 8 Core Habits of the Rich and Wealthy

From 2004 to 2007, Thomas Corley did an exhaustive study to find out the underlying differences between the wealthy and the poor. He spent another 16 months analyzing and summarizing all the data he acquired from his extensive interviews.

The results from the study revealed eight core habits of the rich and wealthy. These habits are a blueprint for accumulating wealth and success.

So, let’s get right into the first habit.

#1 Listen to Audiobooks or Podcasts During Your Commute

Thomas Corley’s study found that 63% of the wealthy did this and only 5% of the poor did this.

85% of wealthy people read two self improvement books per month, as compared to only 11% of the poor doing the same. pic.twitter.com/5q1rix90TB

When I was 24, I made a commitment to turning my car into a rolling library. I looked forward to getting stuck in traffic and taking long road trips. These were the times that I would learn the most and come up with my best business ideas.

More recently, I have phased out my audiobooks and replaced them with podcast episodes. From NPR’s How I Built This to The Art of Charm, there is an endless supply of free knowledge to supercharge your personal development.

I still have a personal CD library of over 200 personal development books. When friends and family ask me for advice, I always pull out one of my audiobooks to give them. I think of myself as a personal development doctor giving out audiobook prescriptions for different problems. At the end of the day, people rarely take advice from other people. If they listen to an audiobook from the expert in that area, then it makes a deep impact everytime.

#2 You Need to Live Within Your Means

If you want to become wealthy, the you will need to practice good spending habits.

Right after my 26th birthday, my first company broke seven figures in yearly revenue. It was generating plenty of cash, and I was spending it as fast as I made it. The more money I made, the more money I would spend.

Today, I am much wiser and manage every dollar that my family makes. Here are four spending habits of the wealthy to model your spending around.

I also like Dave Ramsey’s recommended budget percentages. This will give you a full picture of the spending pie.

If you want to become wealthy, then you need to practice the @DaveRamsey recommended spending habits. pic.twitter.com/P2wYvPkAV8

81% of rich maintain a to-do list compared to 9% of poor doing the same.

When it comes to writing your to-do lists, you want to choose a medium that works for you. There are planners, apps, and many other mediums to use for maintaining your list. For me, I try to keep it simple. I use a small three-by-five yellow sticky note for my daily to-do list. I have tried the planners and the apps, but this old school approach is what works for me.

Every night before I go to bed, I create my list for the next day. I start by looking at my yearly goals and my calendar. Then I begin writing down my action items for the next day. The three-by-five space keeps me from going overboard. It allows me to focus on the most important items that need to get done. Once I have completed the list, I post it on top of my keyboard. This insures that I read my list as soon as I set down at my desk.

#4 Take Care of Your Body

76% of the wealthy exercise aerobically 4 days a week, compared with 23% of poor doing the same.

If you want to be wealthy, then you need to take care of your body. pic.twitter.com/GOB01eYanD

Let’s take a moment to think about a statement made by one of the wealthy participants of Corley’s study. He is 68 and worth nearly $80 million.

“I’ve spent the last 45 years exercising every single day and watching what I eat because I knew the end of my career would be my biggest earning years.”

The longer you live a healthy life, the more money you can make.

65% of the wealthy watch less than an hour of television each day. pic.twitter.com/kch9EasrQ7

On average, I watch 40 minutes of television a day. I do this as part of a wind down routine after my two boys go to sleep. My guilty pleasure is watching laid back sitcoms from the past. Right now, I am rewatching all six seasons of The Wonder Years. I am 51 episodes into the saga of Winnie Cooper and Kevin Arnold.

The only time I go beyond an hour a day is during the NBA playoffs, and I am not ashamed to admit it. Last year’s epic seven game series between the Warriors and the Cavs was one of the best sporting events that I have ever watched. It was more than just a series. It was an epic story filled with shifting moments and great characters. The hero, who was once seen as a villain, willed his team to the greatest NBA Finals comeback of all-time.

The three things wealthy families instill in their children. pic.twitter.com/vSkaYbik7n

Raising children the right way takes time and discipline. If you do not invest time in your children, then you will pay for it five fold down the road.

Another thing that you want to remember is that your children are always watching you, and your habits will eventually become theirs. My two boys are constantly watching what I do and modeling my behavior. I am a man of faith, and this year I am reading the bible word for word and studying what I read every evening. My seven year old son, Grayson, asked me what I was doing one night. Instead of just telling him I was studying The Bible, I told him the entire story of Esau and Jacob over a period of about 25 minutes.

The next night as I was saying goodnight to my boys, Grayson asked me to tell him another story from The Bible. He continued to ask me to tell him a story from The Bible every night for three straight weeks. I ended up buying him a children’s Bible as a gift, and he began to ask me to read with him during his evening bath. From then on, he would not take his bath unless someone read with him from his Bible.

After a week of this, his five year old brother started asking me to read The Bible to him during his bath. I found it amazing that all of these happened over a period of a month. To this day, my boys will not take a bath without someone reading The Bible to them.

The takeaway I got from this experience is two fold. First, my children are always watching me, and I need to be a model of good behavior. Second, I should always take time to play the role of a teacher when my children inquire about something that I am doing. The best teachers tell stories because nothing gets remembered more than a good story.

At the end of the day, you reap what you sow.

67% of wealthy people write down their goals. Only 17% of the poor do the same.

67% of wealthy people write down their goals, as opposed to 17% of the poor. pic.twitter.com/0ruM8rmTHf

Always remember the acronym S.M.A.R.T. goals, to make sure you stay true to the five traits that make a goal S.M.A.R.T.

Let me share with you a well defined goal that I helped one of my student’s craft.

Goal:
She decided that her wild and important goal would be to build her monthly blogging income to $10,000 a month within 365 days.

Action Items:
We identified four action items that what have the biggest impact on achieving her goal.

Tracking:
She created a scoreboard to track her progress with a Google spreadsheet titled “$10,000 Monthly Blogging Income.” It kept track of…

At the end of the day, a goal without action items and a tracking system has little chance of being achieved. So, be sure to go the extra mile will setting your next big goal.

In Corley’s study, it was apparent that all of the people that were classified as wealthy never stopped pursuing their goals. The poor had the bad habit of always stopping short before they made it.

In my 20s, I was blessed with tremendous business success. Unfortunately, my health began to deteriorate rapidly after my 29th birthday. In a matter of a three years, I had lost everything I made. My lowest point was when I was hospitalized for over a week. The doctors ran over 100 different tests in an effort to find out what was making my entire body and mind fall apart. On the second day of being in the hospital, my femoral artery came undone. If my future wife, Natalie, had not been in the room with me, then I would have surely died. She shouted out for help and the nurse yelled out “code blue.”

Over the next 10 minutes, nine doctors and nurses took turns applying pressure to my upper leg. One doctor stood over me and looked me in my eyes, and he continued to tell me to “stay with us.” I remember seeing Natalie leaning up against the wall, looking helpless, as she watched everyone trying to save me. Although I pulled through, I was still slowing dying and no one knew why.

All of the friends and business connections, that I had made the prior decade, were no where to be seen nor heard from. My personal debt was approaching $500,000, and even my family thought I would never have my own business again. I knew in my heart that I would eventually turn it all around, and I never stopped believing.

It took another four years before I was healthy enough to start a business again, but I did it against all the odds. During that four year period of struggling to regain my health, I ended up accomplishing my number one life long goal. I became a father. 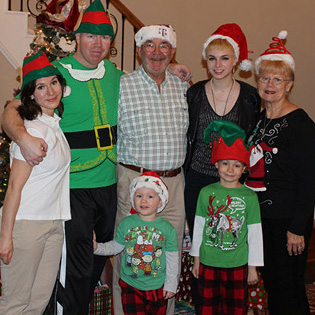