Emotional Intelligence: Why it Can Matter More than IQ is a 2005 book by Daniel Goleman. Within its pages, Goleman discusses how rational and emotional thinking affects our destinies and how emotional intelligence is more crucial than many might think.

#1 There are Two Separate Minds
Goleman’s primary idea is that there are two separate minds living within our brains; one of them is rational and one of them is emotional. Both of these minds combined are what cause us to make decisions in our everyday lives and are often why some of our life trajectories can appear relatively unplanned or illogical.

#2 IQ is only Somewhat Valuable
Goleman makes the bold claim that your IQ score only contributes about 20% of your life’s overall success. This is in stark contrast to what most people think, as they tend to rely on IQ as a catchall term for general intelligence. However, Goleman suggests that your IQ only measures your rational intelligence and your ability to complete raw problems that don’t deal with emotions.

#5 Empathy
Goleman explains what each aspect of emotional intelligence covers. Empathy is the awareness of others’ emotions and it requires us to be calm and somewhat rational rather than in a heightened emotional state ourselves. We must be able to somewhat mirror the physiological state of our conversational partner. If done properly, you’ll be able to actually feel what other people feel.

#6 Self-Motivation
This aspect of emotional intelligence is quite hard to train if you aren’t already practiced in it. It’s the state of being optimistic or hopeful even if you face difficulties in your life. It also affects ideas about delayed gratification, which can stop us from making short-term but bad choices. Instead, you may make more difficult but good choices for long-term benefits.

#7 Self-Awareness
This aspect of EQ is also difficult for many. It requires lots of practice just sitting and listening to how you feel and experience your emotions without judgment. You need to learn to become aware of your emotions as you experience them, particularly negative feelings such as anger, depression, and anxiety.

#8 Handling Relationships
Goleman states that a key component of an emotionally mature person is that they know how to resolve conflicts and properly argue without causing too many negative emotions to flow and avoid “emotional flooding”. Adequate handling of your relationships will lead to greater life satisfaction and a better feeling overall as you interact with those close to you.

#9 Managing Emotions
This doesn’t refer to handling the emotions of others but instead handling your own. You need to learn techniques to manage your negative feelings, so they don’t last as long and they aren’t as potent. Some of these techniques include increasing your physical arousal or experiences if you’re depressed or reframing a situation that caused you emotional trauma in the past.

#10 Flow State
One of the key benefits of high emotional intelligence is that you’ll be able to enjoy the “flow state” much more often. A flow state is what happens when your emotions and focus are both aligned and channeled toward a single task. You lose track of time and do excellent work in whatever hobby or skill you already have experience with. This is not only extremely productive but also emotionally satisfying.

#11 Those With High EQ Are Likely to be Successful
Goleman noted that those with higher levels of emotional intelligence are likely to have healthier and more successful lives, using research to distinguish those folks from those without much emotional intelligence. This makes sense when you consider that emotions are something you have to live with all day every day, so having more positive experiences will necessarily lead to a better life experience as a whole.

#12 EQ is Needed for Business
If you ever plan to manage your own business or rise to any supervisory position within your profession, you’ll need high emotional intelligence to manage your underlings. Bosses or superiors that don’t have high EQ will end up fostering an environment of negative emotions, which will lower their productivity and make the life experiences of all their workers much worse.

#13 Teams Work Because of EQ
The most successful and productive teams are often not those with the highest IQ members on their rosters. Instead, successful teams more often have many members with high EQ ratings, which indicates that the team members can all get along with one another and emotions don’t interfere with goal-seeking or task completion.

#14 Low EQ Leads to Health Problems
Goleman makes sure to note that many people have low emotional literacy, which makes them unable to distinguish between negative emotions. They react poorly to many stressful situations and make poor life choices that lower their overall health and life expectancy. If you want to live a long and full life, EQ is a necessity.

#15 EQ is Important for Marriage
One of the most important ways in which EQ can benefit your life is with your marriage. As divorce is on the rise, healthy couples will need to double down on their emotional intelligence now more than ever. Both members must be able to recognize and control their own feelings while successfully understanding and managing the emotions of their significant other. 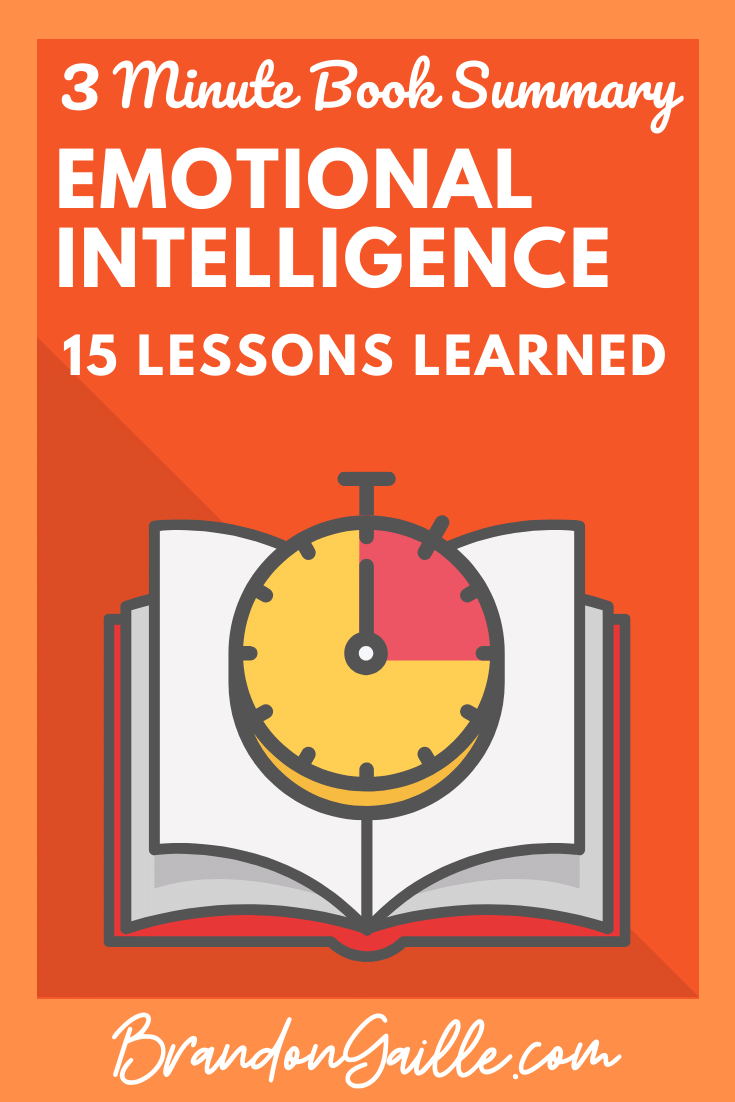