Cocoa has been cultivated for at least 3,000 years from the seed of the Theobroma cacao tree. It is a food resource that came out of Central America, Mexico, and the northern regions of South America. The Aztecs were known to make a bitter beverage from it that was called Nahuati. It wouldn’t be until the industrial revolution when the chocolate-making processed would help to squeeze out the butter that could create a durable product.

Although cocoa beans were first discovered in the Americas, about 75% of the world’s chocolate is produced in Africa today. The Ivory Coast is the primary producer of products for the industry today, followed by Ghana and Indonesia. Over $98.2 billion in chocolate sales occur worldwide each year, with roughly one-third of them originating in Europe.

During the chocolate production process, the cocoa butter transforms into a usable product that becomes a confection. The Hershey Company does a significant majority of this work in the United States, responsible for a 45% share of the overall industry. M&Ms are the most popular brand of candy that involves chocolate in the world today.

#1. The United States is responsible for an 18% share of the consumption of chocolate in the world today. (Statista)

#2. The citizens of Switzerland are the largest consumers of chocolate in the world, with each person eating about 8.8 kg of it per year. That is double the rate of consumption that Americans have for the sweet treat. (Statista) 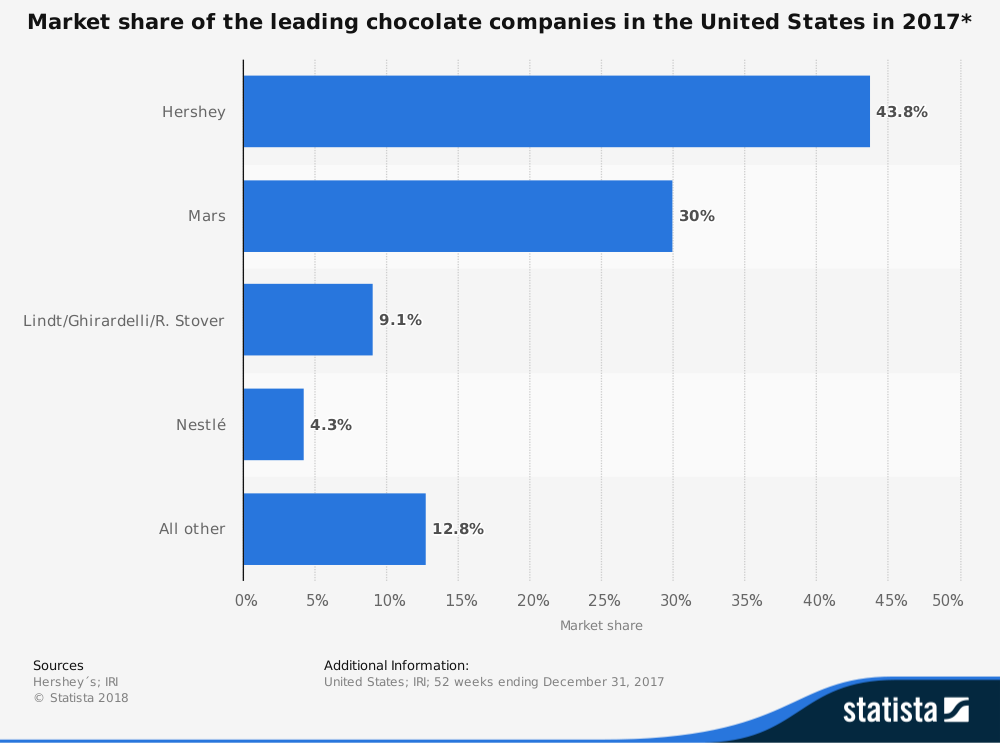 #3. Over 7.3 million metric tons of confectionery chocolate are consumed at the retail level each year around the world. (Statista)

#4. The retail sales of chocolate products in Brazil total $5.5 billion each year. (Statista)

#7. The organic cocoa market represents an exceptionally small share of the overall chocolate industry. About 0.5% of the chocolate products sold each year are certified as being organic, representing about 15,500 tons. (Franchise Help)

#8. Seasonal candy is a significant driver of the chocolate industry each year. Over 21% of the sales that occur annually involve holiday packaging in specific colors, shapes, and flavors that represent the season in question. (Franchise Help)

#9. 22% of the chocolate that Americans purchase each year comes from grocery stores. That is followed by mass merchandise outlets, which are responsible for 21% of the market. Convenience stores provide 16% of the sales, followed by drugstores that provide 13%. (Franchise Help)

#10. About 17% of the global production of chocolate occurs in the Americas each year. Another 9% occurs in the Asia-Pacific region. (Franchise Help) 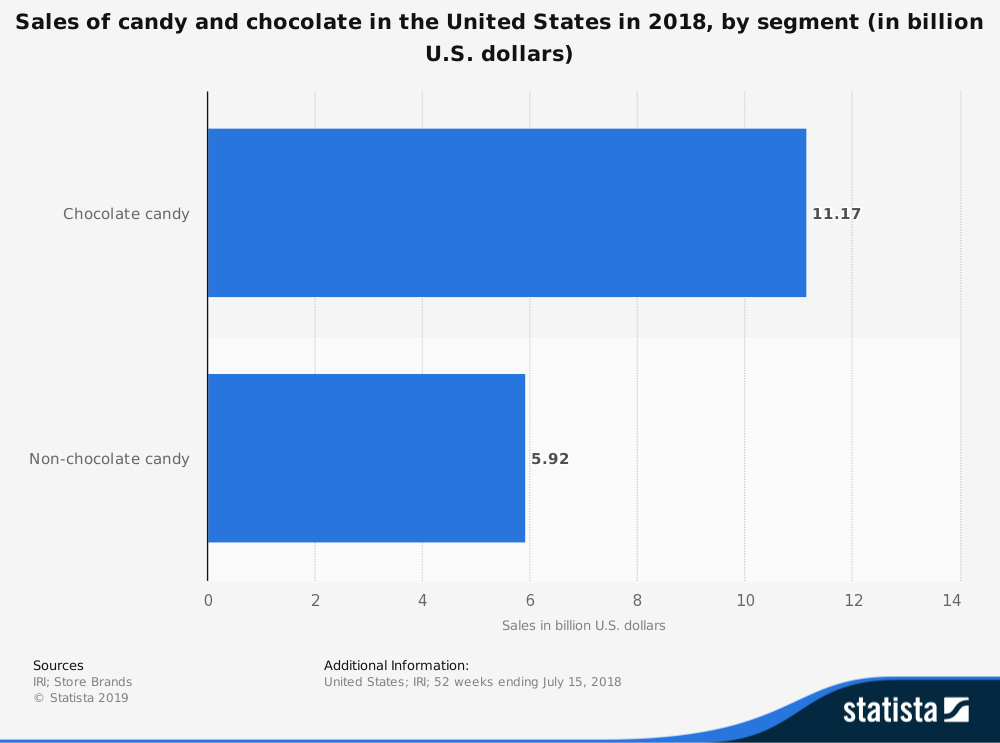 #11. Premium chocolate represents an 18% market share in dollar sales from consumer purchases in the United States each year. (Market Research)

#12. The top 4 marketers of seasonal Halloween chocolates represent approximately 98% of the sales which occur for this segment. (Market Research)

#13. 48% of consumers in the United States have purchased at least one dark chocolate product in the past 12 months. 30% of them made a purchase of candy online during that time. (Packaged Facts)

#14. Chocolate production is an industry in the United States which is worth $17 billion in revenues each year. The industry has grown at an average annual rate of 0.7% since 2013. (IBIS World)

#15. There are approximately 3,400 businesses operating in the chocolate production segment in the United States today. They are responsible for 41,000 direct employment opportunities. (IBIS World)

#16. Cocoa is the primary source of income for over 5.5 million small scale farmers around the world. Many of these chocolate producers live on less than $1.25 per day. (CNBC)

#17. About 2 million children are believed to work on the cocoa farms that produce items for the chocolate industry in the Ivory Coast each year. Roughly 25% of them are believed to be employed in conditions that the European Campaign for Fair Chocolate describes as being exploitative. (CNBC)

#18. About 8,000,000 pounds of sugar is used every day by chocolate manufacturers in the United States to create confectionery products. The value of this commodity is an estimated $800 million annually. (World Cocoa Foundation)

#19. The chocolate industry in the United States consumes about 360 million pounds of shell domestic peanuts every year. (World Cocoa Foundation)

#20. Around 43 million pounds of almonds grown in California are used by chocolatiers in the United States at a value of $67 million. (World Cocoa Foundation)

#21. Approximately 1.4 billion pounds of cocoa and related products are consumed by the chocolate industry in the United States each year. Over $435 million worth of cocoa beans are imported every year for processing because Americans do not have access to domestically-grown cocoa. (World Cocoa Foundation)

#22. 47% of America’s imports of cocoa beans originate from the Ivory Coast, despite the concerns that international governing bodies have with child labor exploitation on local plantations. (World Cocoa Foundation)

#23. Typical recipes for a milk chocolate product use 35% cocoa materials to create the final product. If you were to purchase a dark chocolate confectionery item, then it must contain about 70% cocoa. (World Cocoa Foundation)

#24. The average American spends about $64 every year to satisfy their cravings for chocolate products. (World Cocoa Foundation)

#25. Most of the children who are laboring on cocoa farms in Africa are between the ages of 12 to 16. Reporters have found children as young as 5 being exploited for their labor. 40% of the workers are girls. (Food Empowerment Project)

#26. Indonesia is the third-largest producer of cocoa in the world, holding 16.5% of the global production in 2017. (Euromonitor)

#27. Between 2012-2017, the most significant growth in the development of cocoa beans for the chocolate industry was in Latin America, were a 59% increase in production levels occurred. The Asia-Pacific region saw an increase of almost 49% with the successes experienced by small-holder farmers in Indonesia. (Euromonitor)

#28. Farmers in Latin America experienced a 45% increase in their yields when growing cocoa between 2012-2017 despite the volatility experienced by the commodity. (Euromonitor)

#29. 43% of the global cocoa consumption in 2017 came from chocolate confectionery items, which is more than any other category. (Euromonitor)

#30. With a value of over $100 million in 2017, chocolate confectionery is the most significant snack category in the world today. It counts for 20% of all snack sales. (Euromonitor)

#31. There has been a surge in e-commerce interest for chocolate sales in recent years, with Internet retailers experiencing a 30% growth in revenues since 2012 thanks the dynamic nature of this product. (Euromonitor)

#32. Denmark spends the most per person on confectionery and sugar items when compared to every other country in the world today. They spent $422 per person in 2017. Only the Japanese came close to this level, and even today only spent $370 per person. (Euromonitor)

#34. There are approximately 40 cocoa beans contained inside each pod that growers harvest on their plantations. (Divine Chocolate)

#35. About 90% of the world’s cocoa production which eventually gets turned into chocolate products comes from smallholding farms that are under 5 hectares in size. (ICCO)

#36. Six multinational companies are responsible for 80% of the global chocolate industry today. These firms include Mars, Nestlé, Hershey, and Cadbury. (World Atlas of Chocolate)

#37. 16 of the 20 countries which consume the most chocolate in the world today are found in Europe. 85% of these products are imported from Africa. (World Atlas of Chocolate)

#38. 66% of the chocolate products that people eat every day are consumed between meals. It is also the most favorite flavor in North America, with 52% of people saying that they like it the best when compared to fruit flavors or vanilla. (World Atlas of Chocolate)

#39. 22% of all chocolate consumption in the world today takes place between the hours of 8 PM and midnight. More chocolate is also consumed during the winter months than any other time in the year. (World Atlas of Chocolate)

#41. The two countries which produce the most cocoa products in the world today have a combined GDP of $73 billion. In 2017, Nestlé had over $100 billion in sales. (Fortune)

#42. 96% of the children who are working on chocolate plantations in Africa are involved in hazardous activities on a regular basis. Although the number of children performing these chores fell by 6% in Ghana, they rose by 46% in the Ivory Coast. (Fortune)

#43. It takes about 400 cocoa beans to produce 1 pound of chocolate in the industry today. Each cacao tree produces about 2,500 beans once it is fully mature. (National Confectioners Association)

#44. Plantation owners lose approximately 30% of their trees in any given season because the cacao is such a delicate species. (National Confectioners Association)

#45. There are an estimated 1.5 million cocoa farms operating in western Africa right now. Because the leaves of the cacao tree can move up to 90 degrees from horizontal to vertical, the sunlight that is available on the African continent makes it an ideal place to produce the beans. (National Confectioners Association)

#46. Up to 50 million people around the world today are relying on the chocolate industry for their livelihood. (National Confectioners Association)

#47. The chocolate industry has seen cocoa production almost quadruple from the production levels that were available in 1961. (FAO)

#48. Although Germany does not produce any cocoa beans, they export roughly $4 billion worth of chocolate products each year. Belgium exports an average of $2.5 billion annually. France, the Netherlands, and Italy export about $1.5 billion in chocolate products as well. (FAO)

#49. France receives $544 million worth of German chocolate exports each year. The UK receives $418 million, while Austria purchases another $306 million. (FAO)

#50. The United States is the top importer of chocolate products in the world today, totaling $2 billion worth of items German imports roughly the same amount, as does France. The 10 top importers for the industry represent 53% of the total market. (FAO)

#51. Switzerland experienced a decline of 1.2% in domestic sales for chocolate products in 2016, with turnover rates decreasing by 1.5%. (ChocoSuisse)

Dark chocolate products and premium items are one of the most robust segments of the chocolate industry in the United States in terms of growth. Even though they do not have a significant market share at this moment, consumers are looking for unique products which offer consumption experiences that go beyond basic retail.

From a global perspective, the Asia-Pacific region continues to drive the chocolate industry’s higher revenues each year. As consumers grow more accustomed to the flavors and profiles of products usually only available in the West, the demand for new products continues to increase. Some regions in India and China are experiencing 30% growth in cocoa demand each year.

That means there is an abundance of opportunity right now to get involved in the chocolate industry. Whether you want to on an independent company or start a franchise, the combination of a strong mature market segment in the U.S. and Western Europe with growing areas in Southeast Asia creates a fantastic opportunity to explore what the world of cocoa can do for you.

Expect the industry to continue growing at a roughly 4% pace through 2024, with the most significant gains occurring in China and India during this time.