The craft beer industry offers a value of $26 billion in the United States, yet it is still an area of the economy which offers untapped potential. It is one of the fastest-growing segments of the beverage manufacturing industry today. The amount of consumer interest has been nothing short of incredible. Growth rates in sales, employment opportunities, and the total volume of beer produced have all been in double-digit percentages since 2010.

At a time when the overall beer industry saw a decrease in sales of 1% in 2017, the craft beer industry saw 5% growth. 70% of the volume that is produced by active breweries for the industry provide regional sales in the United States. 22% of the organizations are classified as microbreweries. Approximately 6% are brewpubs, while 1% list themselves as a contract brewing organization.

There are four distinct craft beer industry market segments: microbreweries, brewpubs, contactor brewers, and regional crafters. Homebrewers are sometimes grouped in with this data as well.

#1. California had the largest output for the craft beer industry and 2016, offering $7.3 billion in total impact. Pennsylvania finished in second during the year, with a $5.8 billion impact. They were followed by Texas ($4.5 billion), New York ($3.4 billion), and Florida ($3.1 billion). (The Brass Tap)

#2. The overall beer market in the United States has a value of $111.4 billion. Although the craft beer segment has a 12.7% share of the total volume in the country, it represents over 20% of the total dollar sales that were achieved in 2017. (Brewers Association) 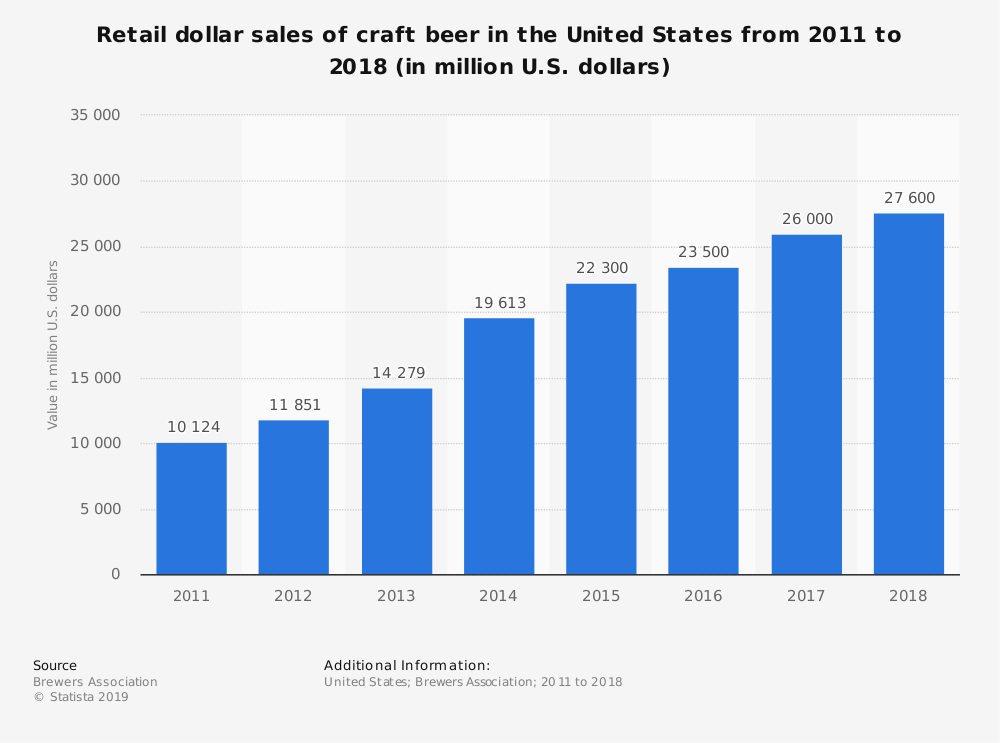 #3. The dollar sales growth of craft beer products in the United States was 8% in 2017. (Brewers Association)

#4. In 2017, even though there were almost 1,000 new brewery openings which occurred in the United States, there were also 165 closures that happened. This figure represents a closing rate of 2.6%, which is a 42% increase over 2016 figures one 116 craft breweries shut their doors. (Chicago Tribune)

#5. Adults in the United States consume an average of 26.9 gallons of beer each year. (National Beer Wholesalers Association)

#6. About one out of every four registered breweries in the United States are listed as a brewpub. That means the products they create for consumers are meant for direct sales that occur on their premises. The average brewery with this classification will produce about 1,000 barrels of beer each year. (Alcohol and Tobacco Tax and Trade Bureau)

#7. 95% of the breweries which are operating in the United States today produced less than 15,000 barrels of beer each year. That classifies the operation as a microbrewery if 75% or more of the beer the company produces is sold off-site. (Alcohol and Tobacco Tax and Trade Bureau)

#8. About 40% of the sales that occur each year for the craft beer industry happen during the months of June, July, or August. (Nielsen)

#9. Almost 90% of adults over the age of 21 in the United States live within 10 miles of at least one brewery. Most of these operations qualify as a craft beer producer. (Brewers Association)

#10. There are more than 700 different craft breweries operating in California right now, making it the largest source of products for the industry today. (Statista) 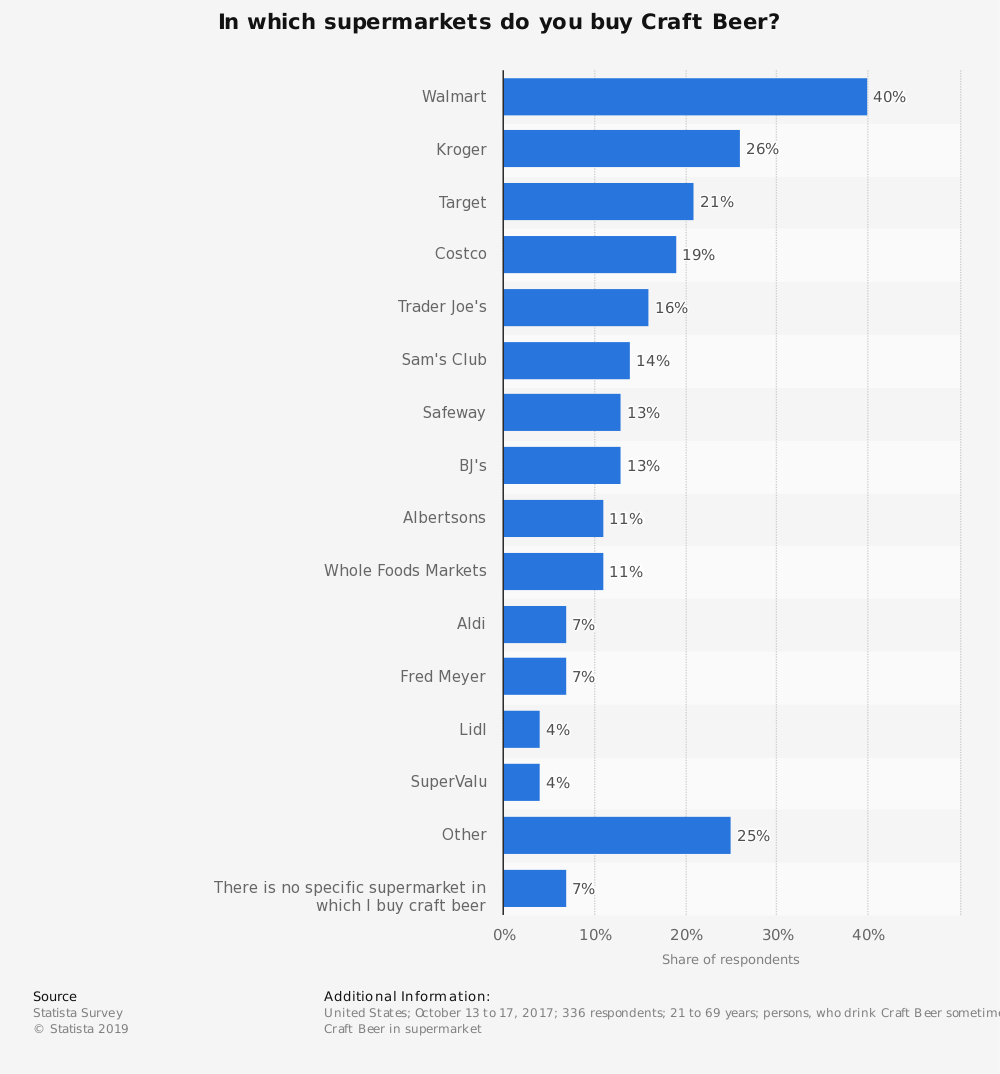 #11. The most popular variety of craft beer that is currently produced by the industry is India Pale Ale, or IPA, which contributes over $1 billion in sales each year. (Statista)

#12. The top three craft beer brands in the United States in 2017 were Sierra Nevada, Samuel Adams, and Blue Moon. The brands with the highest levels of sales growth were Deschutes, Lagunitas, and Goose Island. (Statista)

#13. There are over 135,000 employees working right now in small brewing businesses which support the craft beer industry in the United States. That was an increase of 6,000 positions from the year before. (Statista)

#14. Vermont is the U.S. state with the highest number of craft beer breweries per capita, with 11.5 currently listed as operational. (Statista)

#15. 14% of Americans say that they drink at least one beer every week. 57% of Millennials who count themselves as beer drinkers say that they consume a craft beer weekly. (Statista)

#16. Colorado is the third-largest provider of craft beer products in the United States. There are currently 348 craft breweries operational, creating an economic impact of $3.03 billion each year. Over 1.5 million barrels of craft beer are produced there each year. (Brewers Association)

#18. 1 in 4 households which drink beer will include their favorite beverage with their holiday meal plans, especially during Thanksgiving and Christmas. (Statista)

#19. 1 in 5 households say that they like to include a beer as their beverage when making a homecooked meal to consume. (Statista)

#20. There are more than 4,000 different brewers in the United States which have made the decision to adopt the independent craft brewer seal. This figure represents about 85% of the volume that the craft beer industry produces each year at every level of sales, from local to national. (Brewers Association) 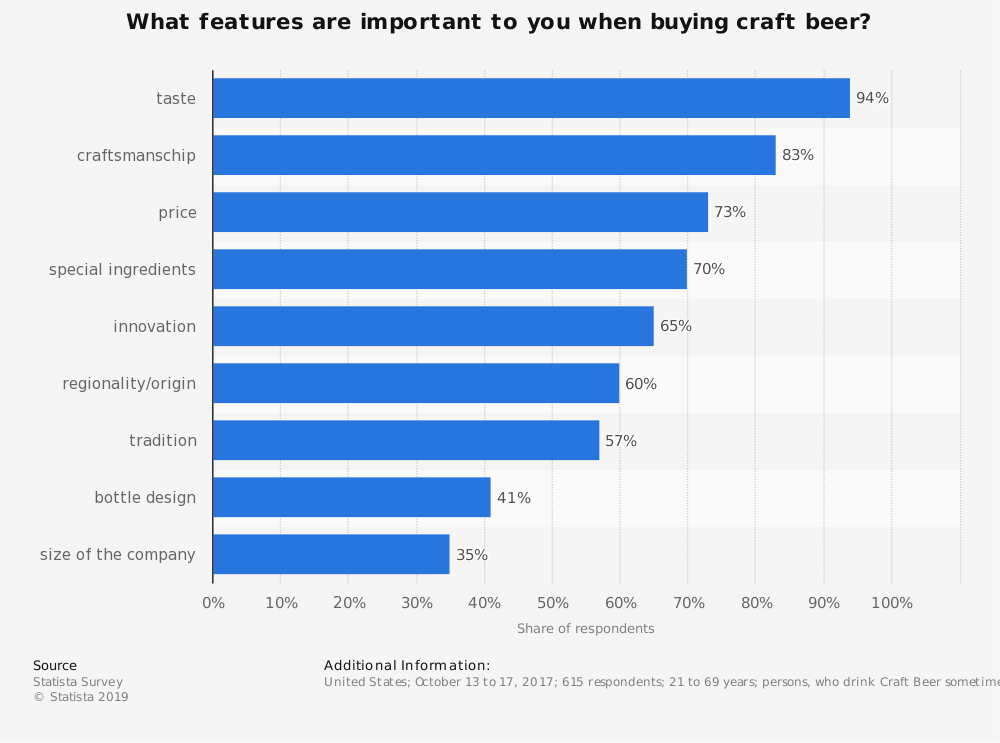 #21. Only 5% of the active breweries which fit the definition of a craft beer producer are not reinvesting their tax savings from recent legislative changes into their business. Most are trying to hire new employees, purchase equipment to expand their product line, or improve the benefits they have available to their workers. Some are even increasing the amount of money they give to charity. (Brewers Association)

#22. There were almost 400 IPA entries in 2018 during the Great American Beer Festival®, making it one of the competition’s most popular categories. (Brewers Association)

#23. 80% of the breweries that made the list of Top 50 beer producers in the United States qualify as being part of the craft beer industry. (Brewers Association)

#24. The three best new craft breweries in terms of total dollar sales in 2016 all came from Texas. Austin Beer Works, Live Oak Brewing Company, and Eighth Wonder Brewery combined to earn over $1.2 million in sales from their products. (Draft Magazine)

#25. Half of adult beer drinkers in the United States say that they make their purchasing decisions based on the quality of the products that are available to them instead of shopping by price alone. (Draft Magazine)

#26. Since 2014, craft beer production in the United States has risen in total sales by 5.7%. Through 2018, the number of active businesses in the industry has grown by 14.1%, while the number of employment opportunities has increased by 9.2%. (IBIS World)

#27. Every one of the 50 states in the U.S., and just over 25% of the 3,143 counties that are in the country have at least one operational brewery which supports the craft industry. (U.S. Census Bureau)

#31. Since 2016, the total number of breweries that are currently operational in California have doubled. (U.S. Census Bureau)

#33. Although the number of breweries and employment opportunities continue to rise in the United States, the average wages for workers in this industry are declining. The average employee earned $969 per week in 2016 compared to $1,293 per week in 2006. (Bureau of Labor Statistics)

#34. The craft beer industry, in combination with macrobreweries, were responsible for over 50% of the employment opportunities gained in the area of beverage manufacturing in the United States between 2010-2016. (Bureau of Labor Statistics)

#35. 25% of the jobs which are available in the beverage manufacturing sector involve craft beer or macrobrewery employment. (Bureau of Labor Statistics)

#36. Approximately 240 million Americans are of legal drinking age today, which represents a potential market of 73% of all individuals. About 36% of these adults say that they never consume alcohol. (National Beer Wholesalers Association)

#37. 83% of the beer that Americans drink each year comes from a domestic brewery. (U.S. Department of Commerce)

#38. In 2014, the craft beer industry was able to have its first year where it made an economic impact of over $1 billion. (Small Business Development Center)

#39. The average craft brewery in the United States employs about 2 workers, earning revenues of approximately $1.4 million per year. (IBIS World)

#40. Although the states in the southeast represent 25% of the population base in the U.S., only 15% of craft breweries decide to open their doors in this region. (Small Business Development Center)

#41. In 2018, about 40% of consumers said that they drink craft beer each year, with 68% of the customers being men. Only 14% of the industry customers identify with a racial or ethnic minority, which means there are numerous opportunities to expand into different demographics. (Brewers Association)

#42. 65% of households in the United States say that they support the idea of having a craft brewery in their neighborhood. (Morning Consult)

#43. Only 46% of people say that they support extending the tax breaks for the craft brewing industry beyond 2019 when they are scheduled to sunset. (Beer Institute)

#44. 38% of people who are active in the craft beer industry said that the aluminum tariffs implemented by the Trump administration will have a negative impact on their business. 13% of industry professionals thought that tariffs placed on China and Canada could actually benefit their business. (Beer Institute)

#45. 74% of craft beer industry professionals say that they are in favor of posting nutritional and calorie information for their products. (Beer Institute)

#46. 47% of consumers who identify themselves as craft beer drinkers say that they prefer a crisp beer which is balanced and clean between malt and hop flavors. (Nielsen)

#48. When asked what type of alcohol-based beverage that they preferred, 40% of consumers in 2017 said that beer was their first choice. Wine has consistently placed second since 2002. (Nielsen)

#49. The craft a brewing industry in the United States contributed over $76 billion of economic impact to the American economy in 2017. This figure represents direct and indirect employment opportunities for more than 500,000 people. Wholesalers, retailers, and breweries are all included in this data. (Brewers Association)

#50. The top 5 states for output in the craft beer industry totaled more than $27 billion in 2017. (Brewers Association)

Although the interest in the craft beer industry is far from gone, the opportunities for growth for new businesses may have already peaked. With thousands of new breweries operating across the United States and around the world, the market is becoming increasingly crowded with multiple products in all economies. Although saturation may still be sometime away, it is inevitable that there will be an increasing level of pullback that occurs as the industry matures.

The amount of deceleration that the craft beer industry experiences will likely be dependent upon how many consumers decide to shift from a macro-brewery to products to items produced by the firms which are able to survive. There is already a steep drop occurring for the largest beverage manufacturers in the sector, which means the most established names and highest quality products have an opportunity to continue growing at an impressive rate.

Industrial brewers have already taken notice of this trend. Anheuser-Busch InBev purchased Goose Island in 2011 for about $39 million, which was their first of numerous acquisitions that are similar. Large companies have numerous ways to push into the market instead of only relying on the pull of consumers.

Even then, we still anticipate a 5-year growth pattern averaging 4% annually through 2024, with the potential to extend that influence through to a 10-year forecast as well. Consumers are asking for better products with more flavor choices today, which means the craft beer industry is in the perfect position to cash in on this trend.