The first historical documentation of egg consumption comes from Egypt and China. As early as the 32nd century BC, wild fowl were being domesticated to produce eggs that could be used as food. Societies in Europe have been domesticating fowl since the 14th century BC for the same purpose. Fully domesticated hens have been part of human societies for almost 3,000 years.

The first chickens to reach North America, however, are believed to have arrived in the 15th century with Christopher Columbus. Although there are more than 200 different breeds and varieties of chickens that are domesticated today for egg-laying purposes, most people eat the eggs of just one breed: Gallus domesticas.

Until the 1930s, egg farms were usually backyard affairs. Farmers would keep chickens to supply eggs to their families. When selling eggs became a profitable venture, some local farms would raise 400 chickens or more at a time.

Now it is not unusual to see commercial laying flocks of 100,000 birds or more.

#1. There are currently about 375 million hens laying eggs in the United States. They produce about 105 billion eggs for consumption each year. (Statista)

#2. The total value of the U.S. segment of the egg industry is about $6.5 billion. Iowa is the leading state for egg production, based on the number of laying hens that are present. (Statista) 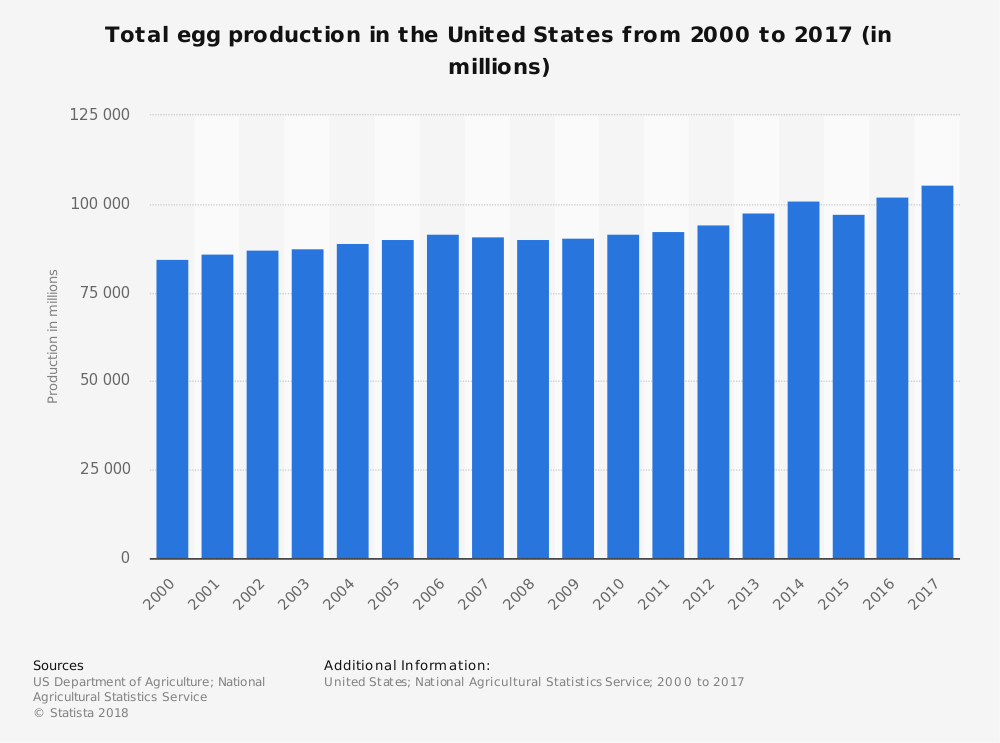 #3. Retail sales of eggs in the United States totaled $5.79 billion in 2017. Most shelled eggs make their way to the retail market, while dried and powdered eggs provide important sales segments to the industry as well. (Statista)

#4. The average person in the United States will consume the equivalent in shell eggs, egg whites, dried eggs, and powdered eggs of 279 eggs this year. (Statista)

#6. The average retail price for a dozen eggs in the United States was $1.82 in 2017. Households will spend about $70 per person on egg purchases over the course of a year. (Statista)

#7. 70% of American consumers say that they eat egg products when consuming protein shakes as part of their nutritional plan. (Statista)

#8. 63% of consumers say that the most important information about their egg purchase is the printed “use by” date on the carton. (Statista)

#9. As of April 2018, the average flock production in the United States was 75.9 eggs per 100 available layers. That figure is down about 2% from the year before. (American Egg Board)

#10. The 5 largest egg-producing states in the U.S. represent more than 74% of the available eggs that reach the retail market each year. (American Egg Board)

#12. Despite warnings of high cholesterol and other potential health issues, Americans have been consuming more eggs now than ever before. In 1998, the average person consumed 239.7 eggs. In 2017, per capita consumption topped 275 eggs for the first time. (American Egg Board)

#14. About 7.5 million 30-dozen cases of eggs were made available for export from the U.S. market, representing about 2.9% of the total egg industry availability. (American Egg Board)

#15. Each laying hen in the United States, of which there are roughly 280 million, produces up to 300 eggs per year. (American Egg Board)

#16. In total, the United States is able to produce about 75 billion eggs each year. That represents about 10% of the total global supply. (American Egg Board)

#17. The number of heavy egg purchasers, defined as a consumer who purchases 3 dozen eggs or more per month, has increased from 38% to 45% since 2013. (American Egg Board)

#18. Medium users, defined as purchasing 2 dozen eggs per month, has increased by 10% in the United States since 2009. (American Egg Board)

#19. Light users, or consumers who purchase 1 dozen eggs or fewer each month, has declined by 28% since 2013. (American Egg Board)

#20. The average egg contains 70 calories, is naturally gluten-free, and is a good source of protein and Vitamin D. (American Egg Board) 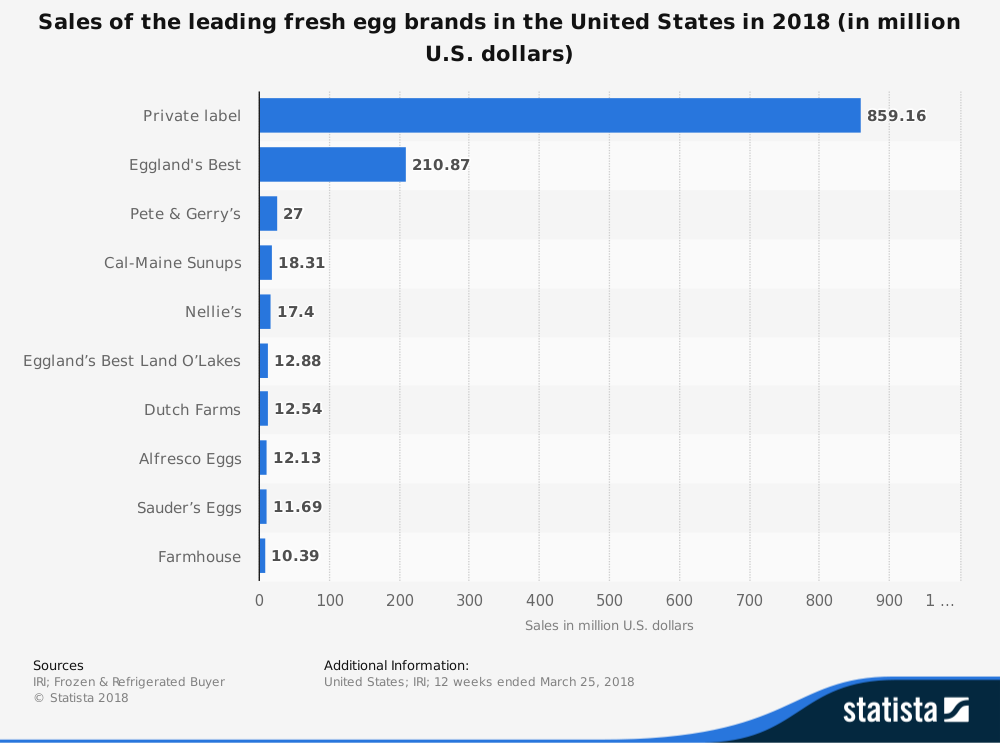 #21. China is currently responsible for 27.9 million metric tons of eggs each year. That represents 45% of the global total for egg production. (U.N. Food and Agriculture Organization)

#22. Behind China and the United States, India is the third-largest producer of eggs for the global industry. About 2.86 million metric tons of eggs are produced there each year. (U.N. Food and Agriculture Organization)

#23. Although egg production is consistent in China and the U.S., it has been declining in other markets due to changes in how fowl can be treated and stored (without cages). Brazil is one exception to this rule, seeing consecutive quarterly increases of 1% or greater. (U.N. Food and Agriculture Organization)

#24. Duck eggs are an important segment of the overall egg industry as well. The Philippines is a top producer of duck eggs, with the Bicol region producing 1,361 metric tons in 2016. (Philippine Statistics Authority)

#25. 61% of the duck production occurs in Camarines Sure, followed by 20% coming from Sorsogon. (Philippine Statistics Authority)

#26. The average farmgate price for a duck egg coming out of Camarines Sur in 2016 was around 6 pesos per unit. (Philippine Statistics Authority)

#28. The average laying hen in Canada produces more eggs than the global average, creating about 340 eggs per year. White Leghorns are the most popular chicken breed in Canada. (Statistics Canada)

#29. In 2017, there were 195 federally-registered egg grading stations located in Canada. There are also 13 registered processing establishments. (Statistics Canada)

#30. There are over 1,000 registered egg farms operating in Canada, which generate about $108 million in total farm cash receipts each year. (Statistics Canada)

#31. Egg farming represents about 2% of the total cash receipts from farming operations in Canada each year. Ontario represents the largest quotient of the egg industry, with 36% of the market. (Statistics Canada)

#33. Table eggs represent about 73% of the total Canadian market for the egg industry. (Statistics Canada)

#34. In total, poultry and egg products together are worth C$4.4 billion in Canada, representing 7.1% of total farming operation cash receipts. (Statistics Canada)

#37. Domestic placements of egg-type pullet chicks in June 2018 was down 54% from the year before, with just 155,000 placed by leading breeders. (U.S. Department of Agriculture)

#38. Broiler-type chicks hatched in June 2018 totaled 821 million in the United States, up 2% from the year before. (U.S. Department of Agriculture)

#39. In 2017, the peak number of available layers reached 380 million in the U.S. in December, an increase of more than 2.7 million layers from the beginning of the year. (U.S. Department of Agriculture)

Consumers are eating more eggs today than ever before. That bodes well for an industry that is always looking for ways to reach new consumers. By 2023, forecasts suggest that the average consumer in the United States may consume 300 eggs or more each year.

At the same time, growing flocks in China pose pricing risks for the global egg market. China has already become the global leader in egg production. With cheaper eggs from China hitting the export market, farmers are struggling to see prices rise at the retail level, even though their own expenses continue to rise.

Potential tariffs create unique challenges for the egg industry as well. Because eggs are such a dietary staple, restrictions on exports could create price increases for consumers at the domestic level, especially in the United States. That could purchase the price of a dozen at retail from under $2 to over $4 in the next 5 years.

The industry continues to grow, both domestically and internationally, because of the overall affordability of eggs. If that trend continues, the strength of this market will only continue to grow in the coming years.