The E&P industry is a segment of the oil and gas industry. It stands for “exploration and production.” It complements the midstream and downstream sectors of the industry.

What is unique about the E&P industry is that it is responsible for finding, producing, and merchandising the various types of oil and gas which are available within specific regions. Once located, this segment is also responsible for augmenting the exploration and production processes.

#1. Global oil and gas exploration has seen a downward trend in the past 5 years because of lower-than-average crude oil prices. Since 2013, the E&P industry has experienced an annualized contraction of 12.9%. (IBIS World)

#2. For the global exploration industry, about 346,000 firms are currently engaged in the E&P processes. These firms are responsible for the direct employment of 4.2 million people around the world each year. (IBIS World) 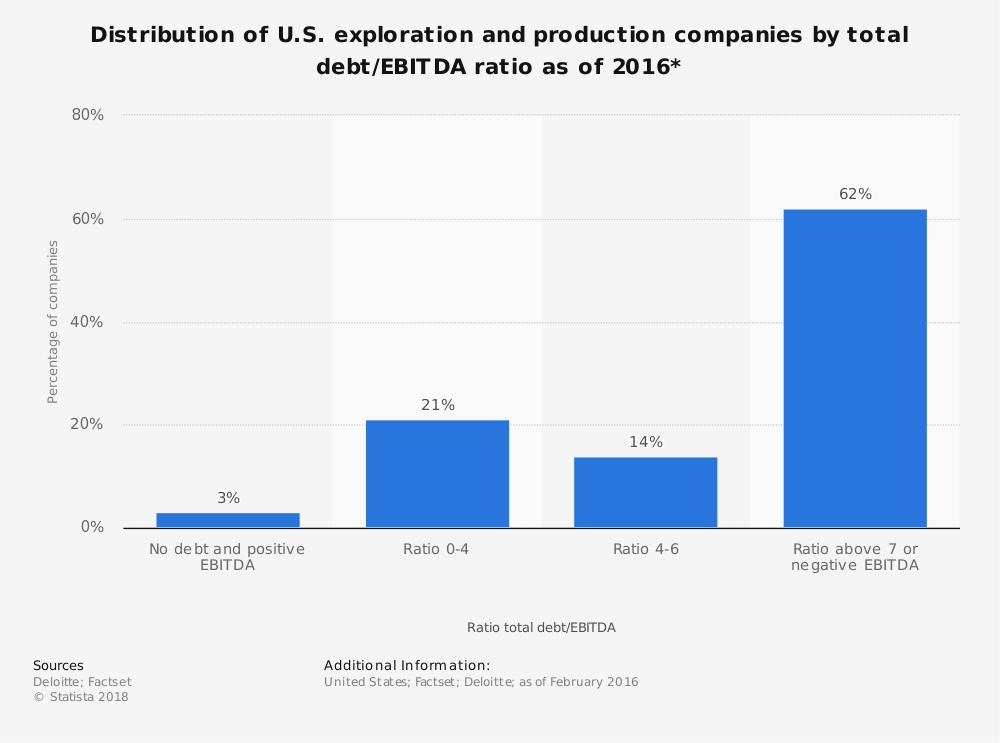 #3. The total revenues generated by the E&P segment of the oil and gas industry average about $2 trillion annually. (IBIS World)

#4. In the United States, the contraction of the E&P industry has been less severe. Since 2012, the industry has experienced an annualized contract of 5.6%. (IBIS World)

#5. About 81,000 firms are currently active within the E&P industry right now in the U.S., providing direct employment opportunities for about 193,000 people. (IBIS World)

#6. Total revenues generated by the U.S.-based E&P industry are about $256 billion each year. (IBIS World)

#7. In the United States, BP, Chevron, ConocoPhilips, and Exxon Mobil are responsible for about 22% of the total revenues generated by the exploration and production segment of the oil and gas industry. (IBIS World)

#8. Since 2015, unconventional producers in the E&P industry have been able to reduce their break-even costs by up to 50%. Some of the biggest cost-savings measures have been implemented by shale producers. (Deloitte)

#9. More than $162 billion in value is added by the oil and gas industry to the U.S. economy each year. (Statista)

#10. At this time, Venezuela is known to have the highest share of current oil reserves. Over 17% of the known oil reserves are found in this South American nation. (Statista)

#11. Iran is believed to have the largest reserves in natural gas, with over 33.5 trillion cubic meters to potentially access. (Statista)

#13. The gross output of the oil and gas production that is based in the United States is over $212 billion. (Statista)

#14. In the last year, ExxonMobil and Chevron combined to produce over $400 billion in total revenues. (Statista)

#18. The forecast global demand for oil is 99.1 million barrels per day, which exceeds the current installed capacity offered by the E&P industry. (Statista)

#19. Global demands for energy are expected to rise by 35% by 2035, thanks to emerging and developing countries continuing to grow around the world. (Castagra Products)

#20. Crude oil accounts for 30% of Canada’s energy demands and provides 15% of its merchandise exports. Natural gas accounts for another 30% of the energy demands found in Canada. There are an estimated 1.3 trillion cubic feet of natural gas in reserves that are waiting to be found there. (Castagra Products)

#22. Oil taxation varies by as much as 45% for every liter produced by the E&P industry. When values from different countries are shifted into U.S. dollars, the United Kingdom has the highest tax rate, at $1.30 per liter. Germany, Italy, and France all have tax rates above $1. In the United States, however, the tax rate for a liter of oil is just $0.13. (Castagra Products)

#24. There are currently 38 active leases for the E&P industry in the Pacific region. The total acreage of all active leases is more than 188,000 acres. (Bureau of Ocean Energy Management)

#25. There are currently 0 non-producing leases that are listed as active within the Pacific region of production. 23 platforms, working with 213 miles of pipeline, maintain production levels off the Pacific coast of the United States. (Bureau of Ocean Energy Management)

#26. In 2013, more than $411 billion was spent in capital expenditures on the exploration and development of oil and gas resources. The United States spent the most as a nation, spending over $130 billion within the E&P industry. (Statista)

#27. Oil is directly responsible for about 2.5% of the global GDP each year. It is also responsible for 33% of the primary energy supply we consume. If natural gas is added to these figures, it becomes over half of the energy we consume annually. (Forbes)

#29. The natural gas pipelines installed in the United States could stretch from the Moon and back about 4 times. In total, there are several million miles of pipeline installed to support the global E&P industry. (Forbes)

#30. The E&P industry is one of the safest operating in the United States private sector right now. Measured as an incident rate per 100 full-time workers, the industry sees a 2.2 incidence rate. In comparison, real estate professionals see a 2.9 incidence rate. U.S.-based manufacturing has a 3.9 incidence rate. (Bureau of Labor Statistics)

#31. Since Norway began offshore production in 1971, there have been a total of 107 productive fields in operation. As of December 2017, 85 of those fields are still in production, with 66 of them being located in the North Sea. (Norsk Petroleum)

#32. Norway current has 75 discoveries made by their local E&P industry that could be, or are being, considered for future development. (Norsk Petroleum)

#33. In 2018, the global investment into exploration, is expected to reach $37 billion. That figure would be 60% lower than the exploration investments made in 2014. (CNBC)

#34. The major oil companies in the E&P industry are expected to decrease exploration investments by an average of 4%. (CNBC)

#35. Exploration success rates have dropped 5 percentage points over the past decade, bottoming out at 35%. (CNBC)

Since 2012, the oil and gas industry has experienced some difficulties on a global scale. Demand levels for oil products have been comparatively weak. Pricing for oil has been relatively low, especially when compared to the record pricing experienced about a decade ago. For some in the industry, it has been difficult to plan for the future because it was unknown if some firms would still exist in the future.

In 2014, when oil prices collapsed, cost-reduction efforts occurred in every segment of the oil and gas industry. Expenditures were cut by upwards of 40% by some firms. In total, more than 400,000 workers lost their jobs. For some E&P companies, oil must be at $25 per barrel just for them to break even.

As oil prices rebound, better financial health will bring the E&P industry back from the brink. Consumers will be paying more for their products, especially if price concessions are taken back. Some products could see an increase of 15-30% on their price tag. Those increased prices, however, will encourage further exploration and production, which will eventually balance out the market once again.

Over the next 5 years, expect the industry to grow at an annualized rate of 3%, assuming all current factors for the industry remain relatively stead during that time period.