Although the global shipbuilding is working to recover from the lows experienced in 2016, some of the fallout is continuing. To book work, some builders are under-pricing their services to gain leverage in the market. Others have focused on providing one specific type of ship through their order book instead of a variety of vessels.

#2. The current global orderbook for shipbuilders stands at over 89 million CGT, with over 5,000 different vessels on order. (Shipyards and Maritime Equipment Association [SMEA]) 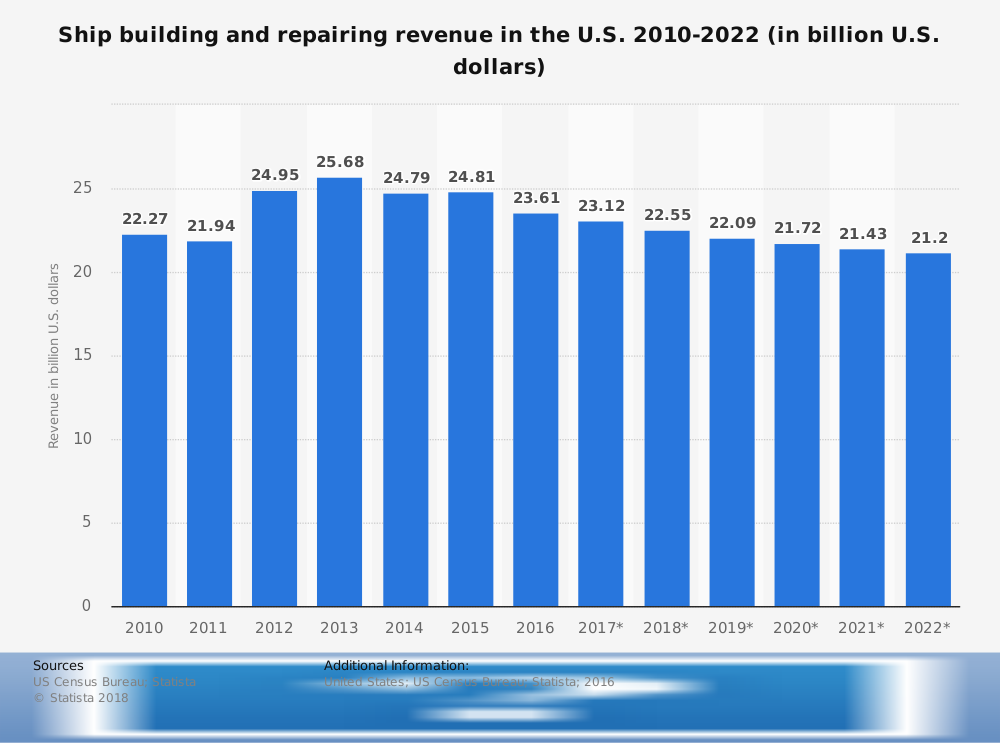 #3. In 2016, the number of new orders for cargo carriers dropped dramatically and was responsible for 80% of the overall decline of the shipbuilding industry to a 20-year low. (SMEA)

#4. 2.7 million CGT of shipbuilding orders are current placed at European facilities, which makes the region fourth in the total tonnage completed and second in the world for overall size. Europe was the only geographic segment of the industry which saw growth in 2016. (SMEA)

#5. Over 50% of the value in new shipbuilding orders since 2016 have been sent to Europe. Japan has received about 20% of the new orders which have come through. (SMEA)

#6. Although Europe is classified as its own region, Greece is responsible for about 10% of the world’s shipbuilding order book. About 500 new orders were added to the industry in 2014, with almost half of the new orders being for bulkers. (Eurobank)

#8. In 2018, only 7 significant vessels were delivered from Canadian shipyards, with the largest vessel being a 284-foot ferry. The industry delivered 4 fishing vessels, an 80-foot ATB tug, and a 77-foot ferry as well. (Transport Canada)

#9. The U.S. shipbuilding industry delivered 41 tugs and towboats in 2018, with the largest vessel being 1,437 gross tons. Another 26 passenger vessels were delivered, along with 5 large ocean-going barges and 9 deep-draft vessels or structures. (U.S. Coast Guard) 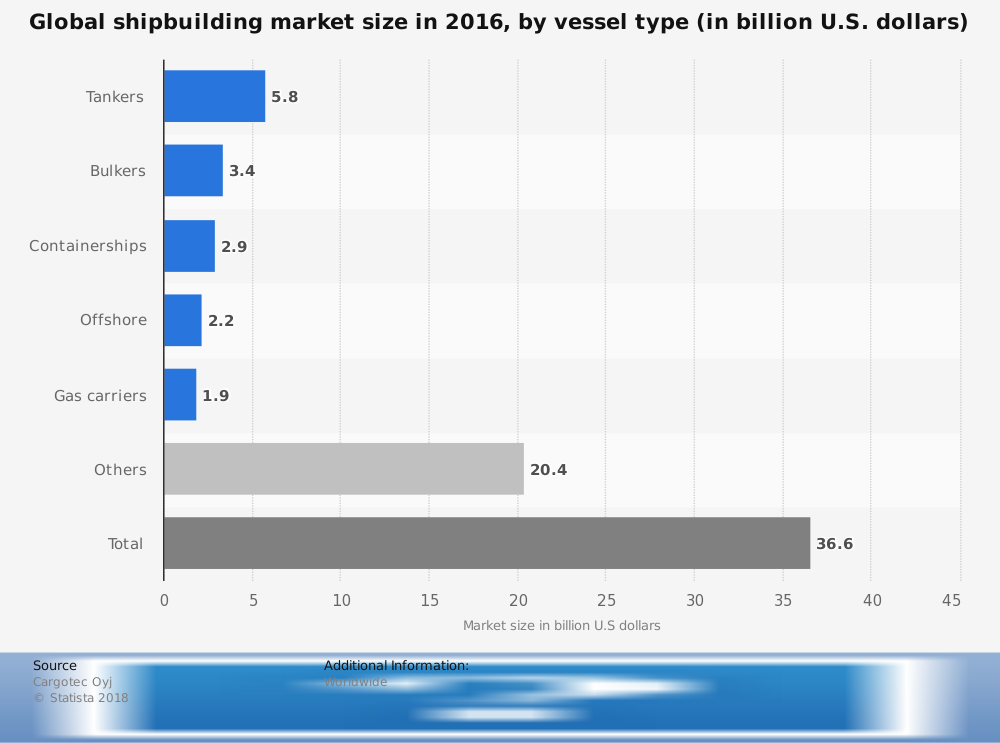 #12. Order volumes for mainstay merchant vessels in the Japanese shipbuilding industry rose by 150% in 2017, with bulk freighters and environmentally-friendly ships seeing recovery trends for the industry as well. (Nikkei Asian Review)

#14. A record-breaking order for a container vessels was sent to the Chinese orderbook in 2018, which would hold 22,000 twenty-foot equivalent containers. The current record is 21,000 containers, which is held by the OOCL Hong Kong. (Hellenic Shipping News)

#15. China successfully delivered the first 33,000-ton smart ship that was approved by Lloyd’s Register of Shipping, along with a 38,000 cubic meter ethylene tanker. (Hellenic Shipping News) 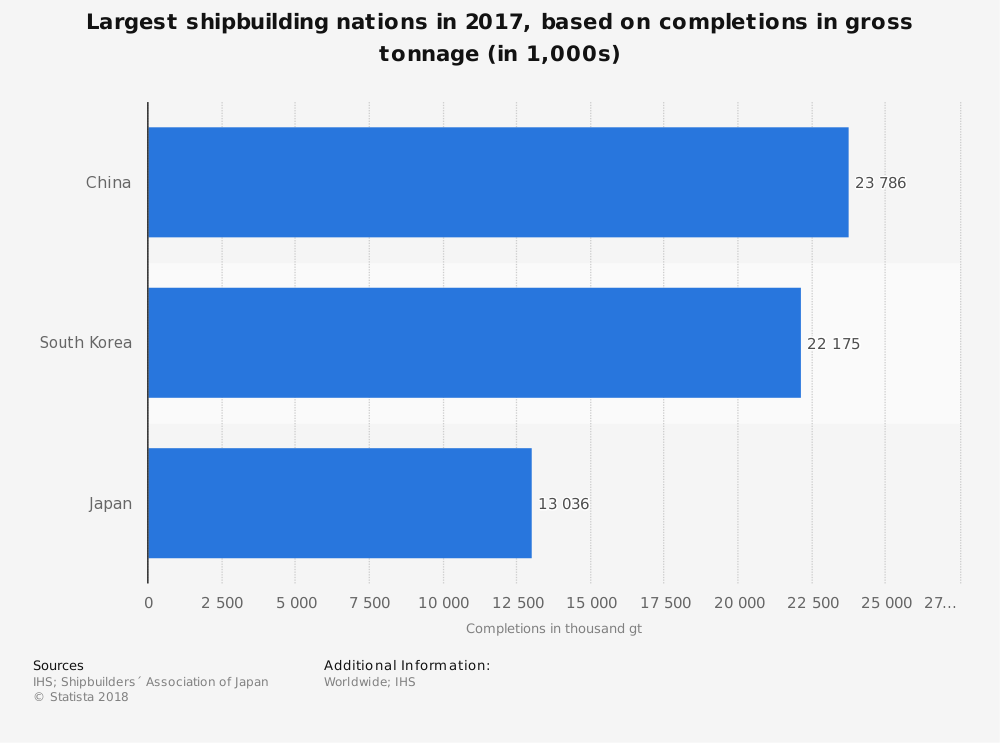 #24. Shipbuilding in the United Kingdom is an industry which is valued at GBP 5 billion. Since 2014, the industry has experienced an average annualized growth rate of 5.1%. (IBIS World)

#25. Over 400 firms are part of the UK shipbuilding industry, providing direct employment opportunities for more than 24,000 employees. (IBIS World)

#26. The Clarksea Index is still hovering around $10,000 per day, which is well below the trend for the decade. This is despite the world industry cycle upturn that has produced 3.8% growth. (Clarkson Research)

#29. Orderbooks for container ships, bulk carriers, and tankers is now 9.6% of the total fleet size. For bulkers as their own category, the orderbook is 7.5% of the fleet, which is their lowest rate since 2002. (Clarkson Research)

#30. There are currently 26 states in the U.S. which have active shipyards. Although many are coastal states or in the Great Lakes region, states such as Missouri, Tennessee, and Kentucky have at least one active shipyard. (Shipbuilding History)

The shipbuilding industry is a cyclical, mature industry that has been around for over 2,000 years. Although technologies have changed with each generation, the need to travel the world’s oceans has never disappeared. That means the market for building ships will continue to exist.

As aircraft shipping methods have increased, the shipping industry has focused on bulk shipping methods. This has led to an increase in container ship orders and bulk carriers. It has also led to a decrease in other vessel types.

That segmentation has led to a shift in where orders are placed. Instead of each producer providing a one-size-fits-all solution, orders are now based on these geographic specialties.

Over time, this will lead to even more cycles in the shipbuilding industry. It will also lead to more stability in geographic revenues, which should help the industry as a whole.