Nutraceuticals are defined as a food product that contains a health-giving additive. By consuming the food product, an individual would therefore receive some sort of medical benefit.

The term “nutraceutical” comes from a combination of the words “nutrient” and “pharmaceutical.” It was first used in 1989 and has now developed into a thriving industry. The segments within this industry include medicinal foods, functional foods, functional beverages, and dietary supplements.

#1. The global nutraceutical market is forecast to reach a total value of $285 billion by the year 2021. In 2016, the total value of the market was $198.7 million. If this can be achieved, then the industry would experience an average CAGR of 7.5%. (Research and Markets)

#2. Functional beverages are expected to continue to lead the industry. In 2016, this segment of the nutraceutical industry was valued at $71.5 billion. In 2021, the segment is expected to achieve a value of $105.5 billion, which would be a CAGR of 8.1%. (Research and Markets) 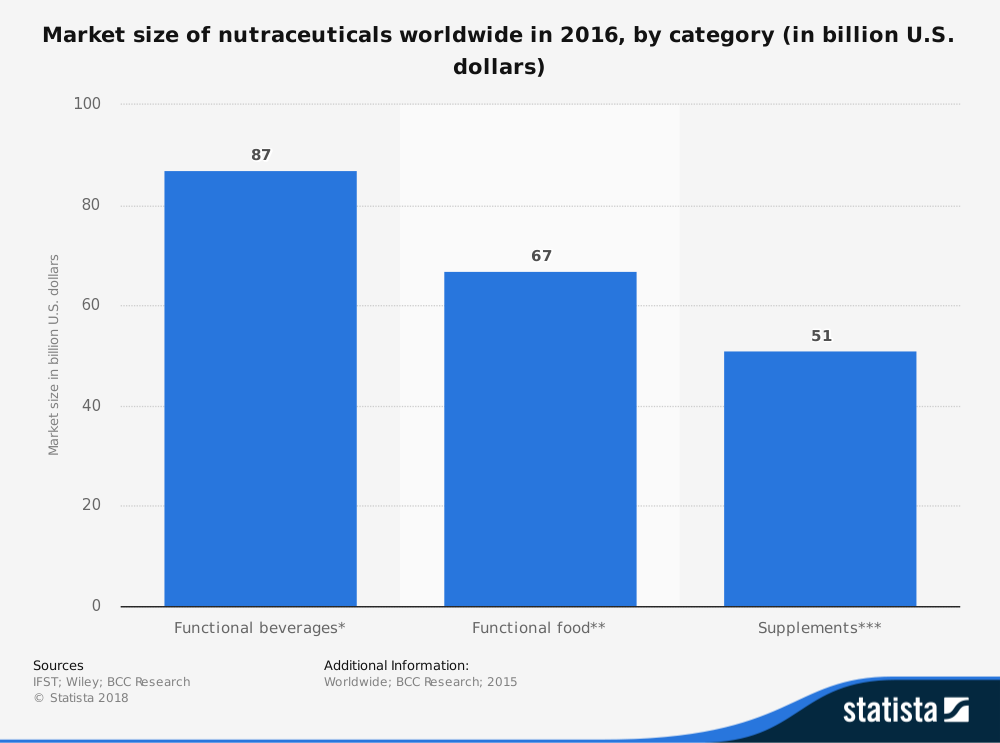 #4. Private label vitamins account for more than $310 million in sales within the U.S. market each year. For a branded multivitamin, Centrum Silver is the most popular product sold in the U.S., accounting for $181.3 million in 2016. Bausch and Lomb Preservision and Airborne are the only two other multivitamin brands to achieve 9 figures in sales in 2016. (Statista)

#5. Centrum is the leading multivitamin vendor in the United States. Produced by Pfizer, when all the Centrum brands are combined, they generated over $275 million in sales annually. (Statista)

#6. 47% of the population in Japan is believed to participate in the nutraceutical industry on a regular basis. (Mordor Intelligence)

#7. 60% of people under the age of 40 are interested in the nutraceutical industry’s products as a way to increase their protein intake levels. (Mordor Intelligence)

#8. The average consumer above the age of 60 is unware of the health benefits that can be provided through functional foods and functional beverages. (Mordor Intelligence)

#9. 75% of the geographic distribution for mergers and acquisitions within the nutraceuticals industry occurs in North America. Another 16% occur in Europe. (Bourne Partners)

#10. 70% of the global population of 1 billion people over the age of 60 in 2020 will live in regions where brands have pushed age-defying and anti-aging products for higher industry visibility. (Bourne Partners) 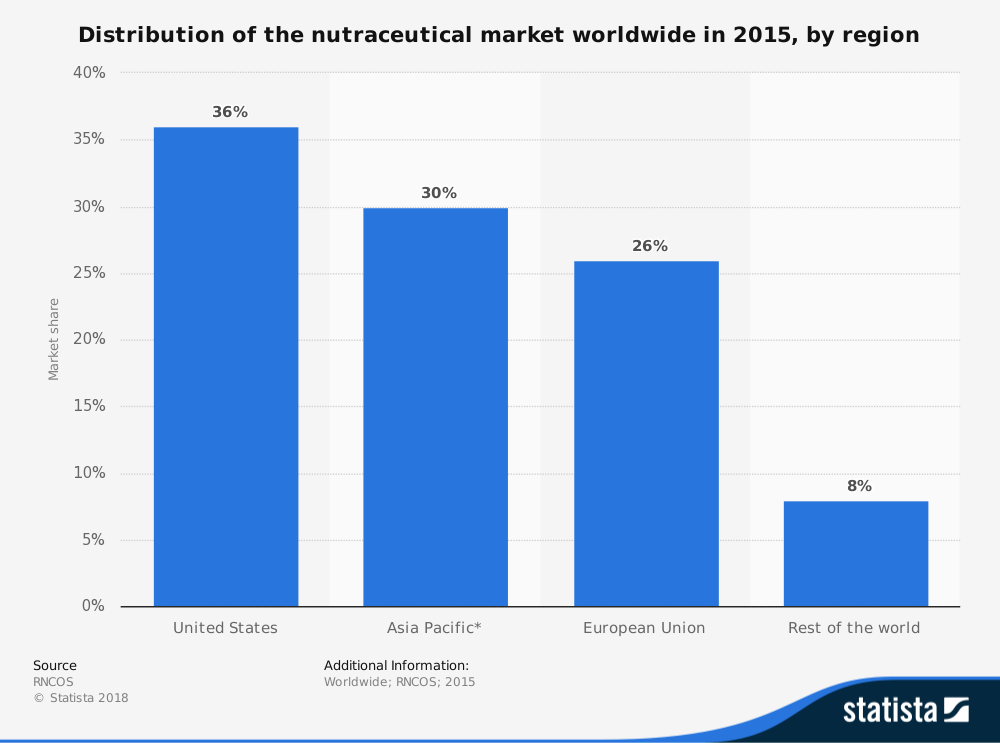 #11. The global market for nutraceuticals may reach more than $310 billion by 2021 because of increases in healthcare costs. Higher medical costs often translate to higher rates of self-diagnosis, more preventative care, and self-medicating. (Bourne Partners)

#12. The heart health sector of the nutraceuticals industry is projected to achieve $15.2 billion in revenues by the end of 2018. This was driven by a CAGR of 15% in the Asia-Pacific region. (Bourne Partners)

#13. The global market for probiotics is expected to reach more than $39 billion by the end of 2018, with increased availability in yogurt, dietary supplements, and other functional foods. (Bourne Partners)

#14. By 2030, 13% of the global population is expected to be above the age of 65. As disposable income rates continue to rise, especially in the Asia-Pacific region, the nutraceutical industry will take advantage of the opportunity to expand their market share in key markets. (Bourne Partners)

#15. In the United States, 74% of Americans stated that the term “natural” to them equates to a healthier food choice. That means the ingredients within the nutraceutical industry are expected to reach more than $30 billion in sales by 2021. (Bourne Partners)

#17. In 2017, the U.S. market held a 39% share of revenues generated by the nutraceutical industry, making it the clear leader globally in overall sales. (EU-Japan Center)

#18. In 2000, the European investment into new nutraceutical products was 0.8%. In 2014, investment rates reached 1% of total revenues for the first time. (EU-Japan Center)

#20. Although India represents just 2% of the 24% of the market share the nutraceutical industry enjoys in the Asia-Pacific region, it has one of the fastest growth rates in the world. Between 2006-2012, the average annualized growth rate in India was 19.1%. (EU-Japan Center) 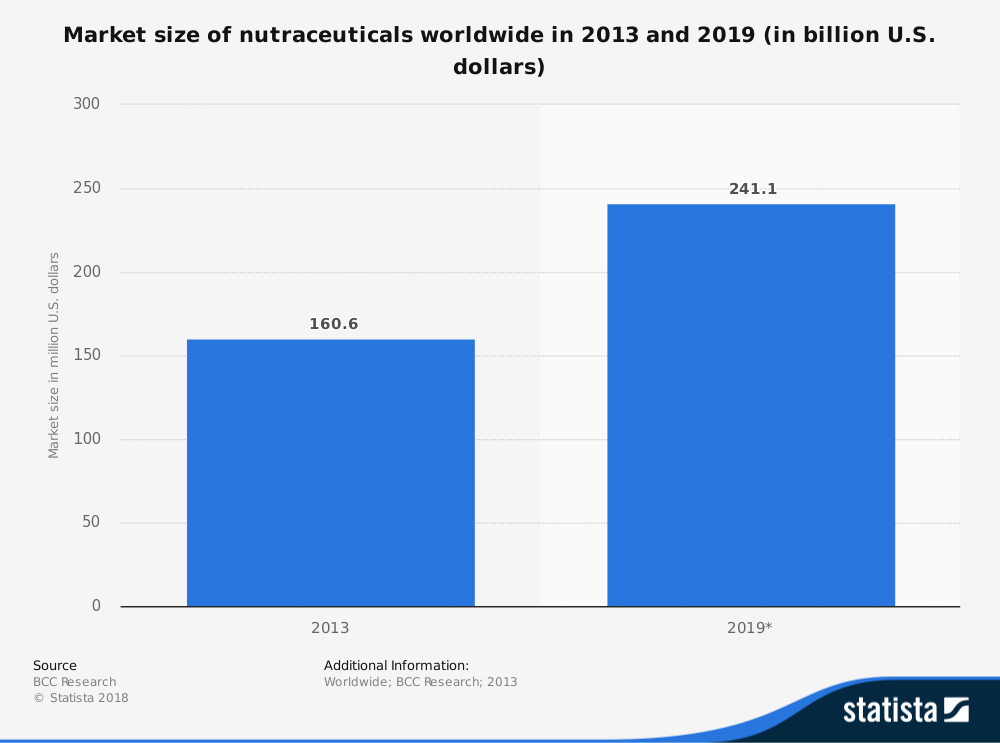 #21. Functional food ingredients are expected to reach a total value of $2.5 billion by 2020. North America is expected to have the largest share of this segment, though rising opportunities in this segment for China, Brazil, and Italy could shift the revenue demographics somewhat. (EU-Japan Center)

#22. The phytonutrients market for the nutraceutical industry is expected to grow at an annualized rate of 7.2% for its next 5-year forecast period. This would have it reach a total value of $4.6 billion. (EU-Japan Center)

#23. Prebiotic ingredients are expected to have a total market value of $5.5 billion globally, with an expanding market found in animal feed for the industry. (EU-Japan Center)

#25. The most popular functional foods that are sold by the nutraceutical industry are yogurts. Over 76% of consumers purchase yogurt products. Breakfast cereals come in second, at 75.9%, while butters and spreads account for 74% of consumer habits. (EU-Japan Center)

#27. 4 out 5 consumers in the developed world believe that they receive all their daily nutritional requirements from their regular eating habits, even though 43% of consumers are interested in the potential health benefits of functional foods. (EU-Japan Center)

#28. 45% of consumers in the developed world say that they “never” or “rarely” consume functional foods or beverages because they feel that their normal diet will sufficiently meet their dietary needs. (EU-Japan Center)

#29. Pharmacies have the largest retail share of nutraceutical sales globally, accounting for 39% of all revenues. They are followed by grocery stores, which have a 31% market share. Online sales or mail order sales make up just 6% of total industry revenues. (EU-Japan Center)

#30. In the United States, nutraceuticals for pets is expected to contribute another $1.6 billion in revenues annually. About half of those revenues would come from horse owners. (Packaged Facts)

#31. Joint-health support is the largest segment of the pet nutraceutical market, accounting for 39% of the products that are sold by the industry annually. (TechNavio)

#32. With the introduction of nutraceuticals to the general population in India, undernourishment rates in the nation have reduced from 17% in 2008 to 15% in 2016. (World Food India)

In the developing world, the mortality rate reaches nearly 40% in some nations because of nutrition-related issues. This shows that the nutraceutical industry is not only important, with an enormous level of potential growth awaiting it. Certain nations, such as India, may see growth levels within this industry reach 16% annually over the next 5-year period.

The European market is mature for the nutraceutical industry, while the U.S. market has reach an advanced level in terms of market variety, branding, and product penetration.

Since 2010, this industry has experienced strong levels of global growth. Part of this was fueled by consumers returning to the industry after cutting ties to it in 2007-2009 as a personal cost-savings effort. Assuming products remain affordable for the industries mature markets and access improves in the developing world, each segment should experience continued strong growth through its next 5-year and 10-year forecast periods.

In 2014, US healthcare spending reached $3 trillion. That impacts household budgets negatively. These families will search for affordable alternatives that keep them out of the doctor’s office. One of the best answers they will find are the functional products offered by the nutraceutical industry.