Gottlieb Daimler and Wilhelm Maybach became the first to build a motorcycle in 1885. They called it a riding car, a “reitwagen,” and this first motorcycle could reach a top speed of 11 kph on its 0.5 horsepower engine. By the turn of the century, production bikes with two-cylinder engines could reach top speeds of 45 kilometers per hour.

Compare that to a modern Harley Davidson, which offers a four-valve engine and 100 horsepower, and you can see how far the motorcycle industry has come in such a short time.

Harley Davidson is the primary brand you’ll find in the motorcycle industry, especially in the United States. In 2015, the company achieved a 29% market share on all new motorcycle sales. Honda came in second with a 14% share, followed by Yamaha at 13%. One of the few companies see an increase in sales, Polaris, experienced 20+% growth for its Indian brand of motorcycle, though the company holds a 4.4% market share.

#1. In 2014, total motorcycle registrations in the United States reached 8.4 million, which was nearly double the number that was registered in 2000. (USA Today) 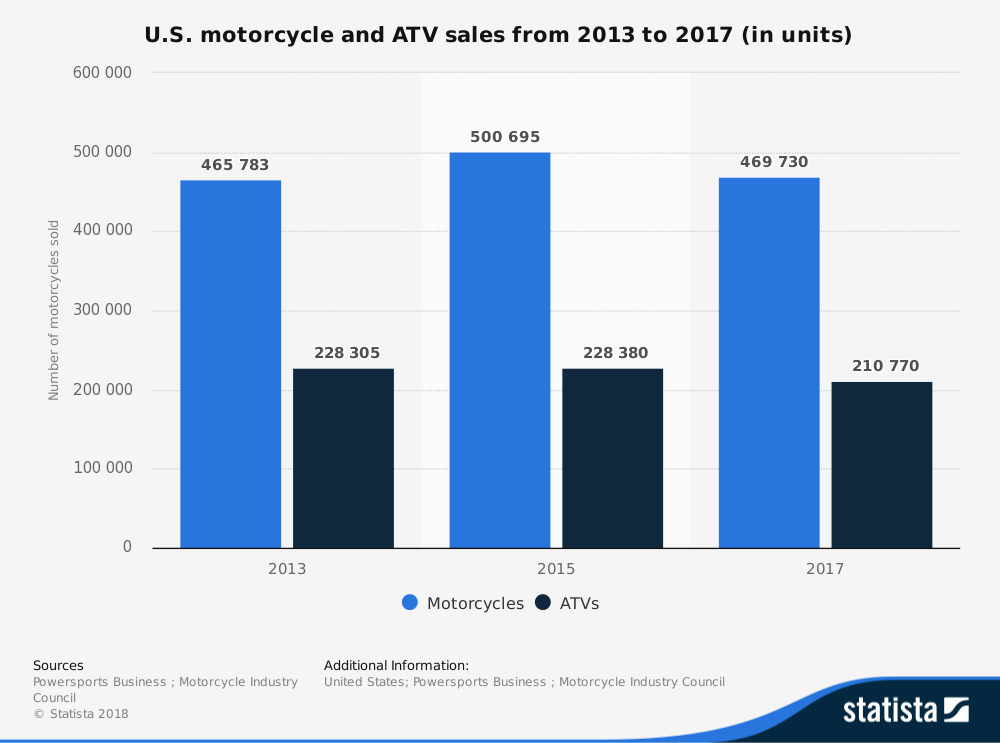 #3. 1.9 million motorcycles are expected to be sold across North America in 2018. Harley Davidson is the global leader in the industry, with $5.6 billion in total revenues earned each year. (Statista)

#5. The motorcycle manufacturing industry in the United States generates $4.4 billion in revenues each year. (Statista)

#6. There are 351,000 on-highway motorcycle sales which occur in the United States each year. (Statista)

#7. Over $1.8 billion in U.S. motorcycle exports are sent to the rest of the world annually. More than 1 million registrations for motorcycles occurs in Europe each year. (Statista)

#10. Harley Davidson has a 60% share of the female market within the motorcycle industry thanks to the introduction of its Street 500 and Street 750 models. (The Motley Fool) 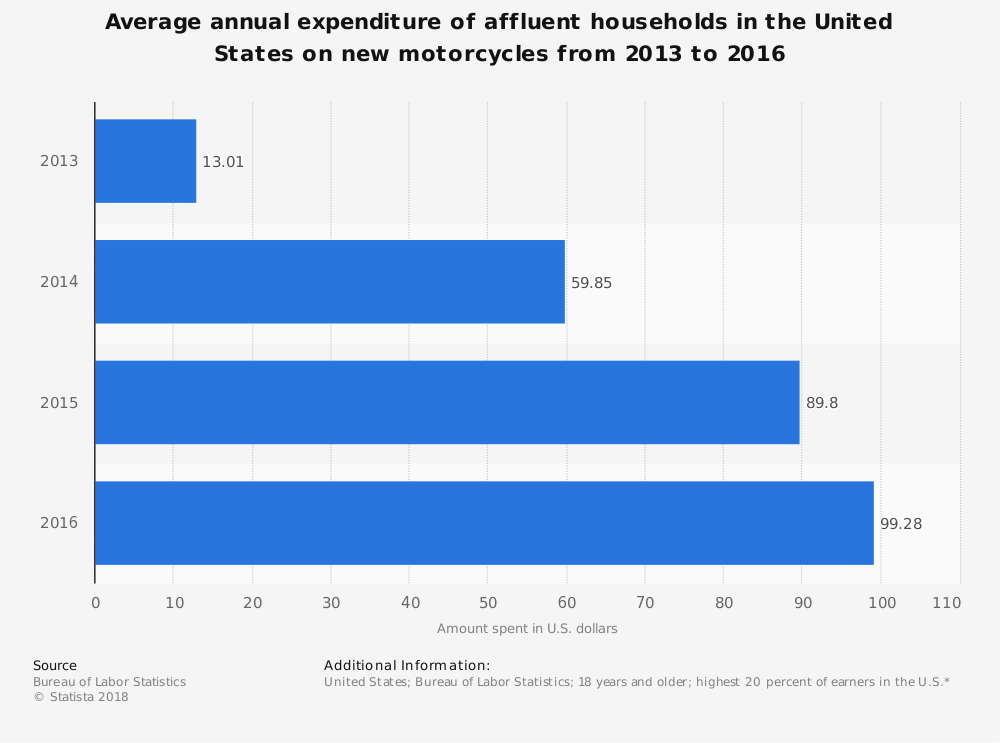 #14. 72% of people who decide to purchase a motorcycle have either gone to college or graduated. That’s about the same percentage (71%) of owners who are employed, while 15% of the U.S. market describes themselves as being “retired.” (The Motley Fool)

#15. 74% of the motorcycles that were sold in the U.S. were on-highway bikes, with all motorcycles in the country representing 3% of total vehicle registrations. (The Motley Fool)

#18. During the first year it was on the market, Ducati sold 15,000 Scrambler motorcycles, which turned out to be 28% of its total business for the year. (Bloomberg)

#19. Harley Davidson is trying a different tactic. They’re promoting the fact that they have 9 bikes currently priced for less than $12,000. Their marketing chief notes that the cost of their motorcycles is about the same price as a coffee. (Bloomberg) 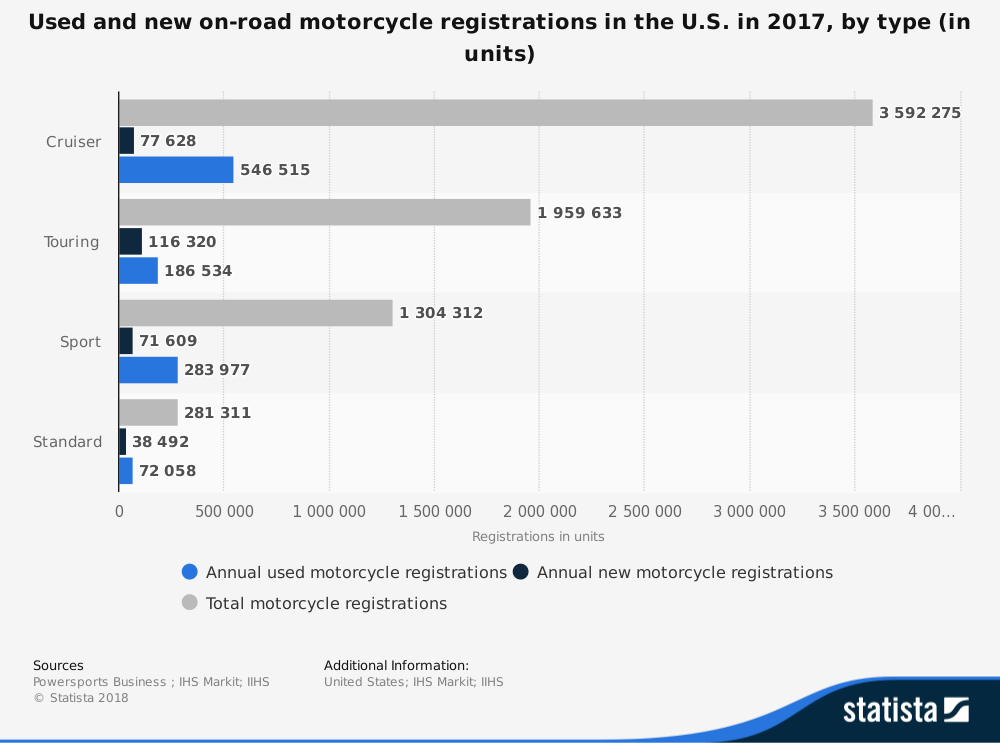 #23. In 2013, the 7 top motorcycle manufacturers sold more than 33 million bikes around the world, with the U.S. market contributing less than 2% of the total sales volume. (The Motley Fool)

#24. Honda sold 15.4 million motorcycles in 2013 when scooters and mopeds are included with the figures. Over 13 million of those bike sales, however, were in Asia. Europe, North America, and Japan combined for just 646,000 units. (The Motley Fool)

#25. Even though Honda was the best-selling brand in 2013, motorcycle operations for the company were just 13% of its total sales. (The Motley Fool)

#26. 78% of motorcyclists said that they were fully insured, while more than half said that they don’t ride their bike for at least a portion of the year. 42% of owners say that they either drop or alter their coverage during the off-season. (Foremost Marketing Research)

#27. 72% of motorcycle owners in the United States say that they only own one bike. 46% of current owners say that they plan to purchase a new motorcycle within the next 24 months. (Foremost Marketing Research)

#28. 92% of motorcycle owners use at least one form of social media. 81% of owners would be classified as a heavy social media user in terms of information consumption. (Foremost Marketing Research)

#29. 63% of motorcycle owners say that they own at least one other recreational product in addition to their bike. (Foremost Marketing Research)

#30. 1 in 3 motorcycle owners have added at least $100 in customization to their primary bike. Sport bikes (35%) and Cruisers (29%) make up the majority of bike ownership in the U.S. right now. (Foremost Marketing Research)

#32. For those who own a scooter in the United States, 40% of owners say that they own a Honda. Yamaha was the second-most popular brand (17%), followed by Suzuki (12%). (Foremost Marketing Research)

#34. 46% of current motorcycle owners said that they purchased their bike used, with 35% working with a private party instead of going to a dealership. (Foremost Marketing Research)

One way the industry could begin to bring customers back into the fold is to offer more entry-level motorcycles which are affordable to the average customer. BMW is attempting this option with a 313cc street bike that retails for less than $5,000. Suzuki has offered scooters in a similar price range, while Royal Enfield is introducing 500cc single cylinder bikes for less than $7,000.

You might hear that Millennials aren’t into bikes and that is why the core demographics for the motorcycle industry is aging out. That statement is inaccurate. Most Millennials grew up on dirt bikes. Purchasing a heavy bike for the highway doesn’t interest them. They want something light, fast, and works with their student loan payments.

Although the industry is still trying to recover from the economic downturn before 2010, with sales at half the rate they were in 2007, there is still hope on the horizon. Smaller, affordable bikes are coming for the next generation. The real question is this: with everyone recognizing that they need more people at an entry-level stage, which brand will come out on top?