The global oilfield services market is expected to be worth more than USD $139.1 billion by 2025. Since 2012, the volatility within the oilfield services industry has led to extreme changes in the industry’s year-on-year revenue growth. With the prices of crude oil and natural gas plummeting between 2014-2016, the need for industry services was greatly reduced.

#1. The oilfield services industry, which includes oil and gas field services in the United States, was worth an estimated $63 billion in 2017. From 2012-2017, the industry experienced steep declines, losing an average of 13.6% each year. (IBIS World)

#2. More than 21,000 firms are currently active in the U.S. oilfield services industry today, responsible for the direct employment of more than 315,000 people. (IBIS World) 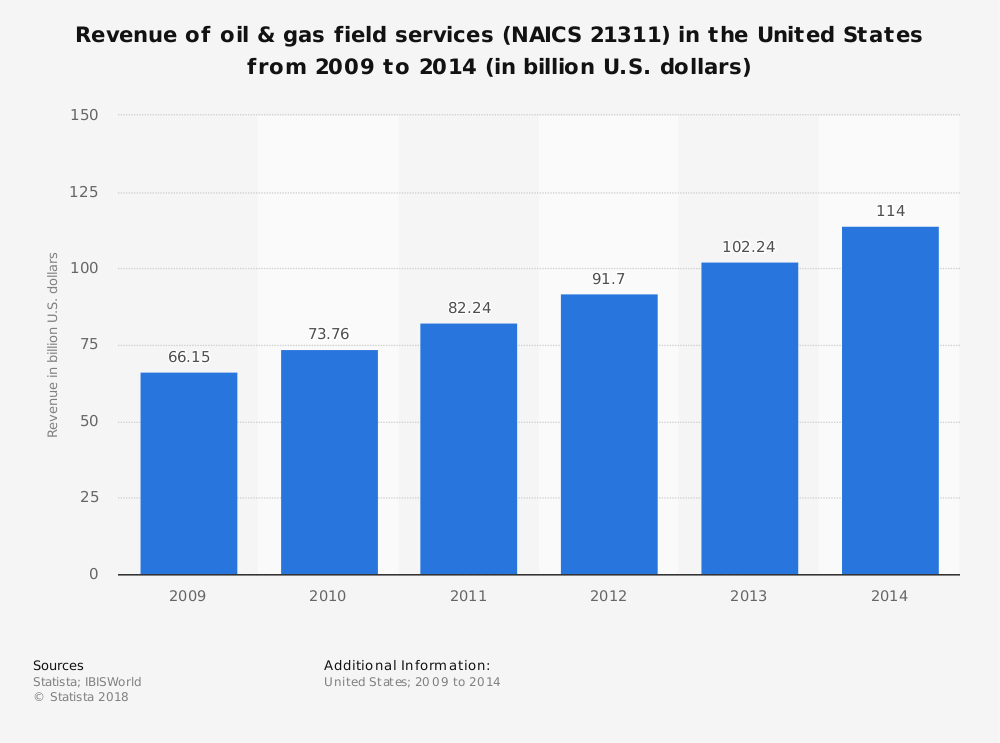 #4. In Canada, 80% of the oilfield services industry is centered in the province of Alberta. (PSAC)

#7. Oil and gas companies have a combined $2.4 trillion in annual operating costs each year. (Deloitte)

#8. There are an estimated 1.7 trillion barrels of crude oil in global reserves that are available to be accessed by the oilfield services industry as of today. (Statista)

#9. The #1 region for the oilfield services industry is still Saudi Arabia, as almost 50% of all known global oil reserves are located within the country’s borders. (Statista)

#10. More than 300 billion barrels of oil are available for drilling in Venezuela, which is home to about 17% of the total proven oil reserves as of today. (Statista)

#11. The total demand for crude oil products in the world today stands at more than 99 million barrels each day. That is about 2.5 million barrels of oil above what the current refinery capacity happens to be globally. (Statista)

#12. In 2017, the United States reached a crude oil demand level of 19.9 million barrels of oil per day. That makes the U.S. responsible for about 20% of the world’s total oil consumption annually. (U.S. Energy Information Administration [EIA])

#13. Despite its rapid economic growth, China is still almost 7 million barrels behind the levels of consumption required to meet U.S. demands. In 2017, China was consuming about 13 million barrels of oil per day. (EIA)

#14. 70% of the oil consumption that occurs in the United States is directed toward transportation needs. (EIA)

#16. 4 out of 5 Americans say that they spend 1 hour or less in their vehicles every day. About 10% of drivers, however, say that they spend more than 90 minutes driving each day, often for commuting to work. (National Association of Convenience Stores)

#17. The average household in the United States spends about $2,450 of fuel purchases each year, which equates to about 4% of their income. (U.S. Census Bureau)

#19. Canada is responsible for about 40% of the crude oil imports that are provided to the U.S. market each year, with Saudi Arabia providing 9%, Mexico providing 7%, and Venezuela providing another 7% each year. (EIA)

#20. Mexico imports the most crude oil from the United States, responsible for 17% of the total exports by volume for the oilfield services industry. Canada is responsible for 13% of the U.S. crude market, while Brazil and Japan are 6% each respectively. (EIA)

#21. More than 553 million tons of crude oil are imported by Europe each year, though Russia is the primary destination. More than 30% of the oil products that go to Europe are purchased by Russia. (Eurostat)

#22. In the United States, there are quarterly oil and gas lease sales offered if the Department of the Interior has parcels available. First year rent for a new lease is $1.50 to $2.00 per acre. (Bureau of Land Management)

#23. There are currently about 4,000 active oil and gas platforms located in the northern Gulf of Mexico that are supported by the oilfield services industry. (Live Science)

#24. By 2035, it is forecast that about 46% of the natural gas that we consume each year will come from fracking services that are provided by the oilfield services industry. The average fracking well requires about 5 million gallons of water over its lifetime for proper operation. (U.S. Environmental Protection Agency [EPA])

#25. Natural gas accounts for 25% of all the energy which is currently used in the United States each year. (EPA)

#26. About 90% of the fluids used for fracking are water, with 9.5% of the fluid consisting of sand. The remaining 0.5% is a series of 750 compounds that are chemical additives to the solution, which range from common household cleaning products to known carciongens. (EPA)

#27. Up to 40% of the fracking fluid that is used for drilling will flow back to the surface eventually. (EPA)

#30. Although it is not generally recognized as the leading state in oilfield services, Kansas has over 1,300 active wells. Colorado comes in second, with over 1,000 active wells, while North Dakota has 925 active wells. (Worldoil.com)

#31. Despite being in third place for active wells, North Dakota has the most total footage in production, at more than 18.7 million feet. Colorado comes in second, with more than 11 million feet. Kansas actually comes in sixth, despite leading in total wells drilled. (Worldoil.com)

#32. In total gains, Wyoming has been one of the biggest boosts for the U.S. oilfield services industry. Their oil and gas drilling counts improved by 27.7% in 2017, with up to 466 wells forecast for production. (Worldoil.com)

Even with expected pricing gains in the crude oil and natural gas sectors, ongoing volatility is forecast to continue through at least 2023, if not until 2028. Because of this trend, the overall oilfield services industry is expected to average losses of 4.2% per year over this period. Some years may see revenue gains, especially if there are unexpected rises in pricing structures, but the overall forecast still looks rather bleak.

Over the same time period, GDP in the United States is expected to rise by 2.2%.

Although there is a strong push in many markets to have renewable sources for energy, these services still require crude oil and natural gas products to be manufactured. That means the production needs, well maintenance, and drilling supports will continue.

In 2019 and beyond, per-barrel pricing for oil is forecast to be around $52. At that rate, the oilfield services industry should see stable revenues, though changes by OPEC or another war in the Middle East could create unpredictable pricing within the sector. Although more than 200 companies have gone out of business between 2016-2018 in this industry in the U.S. market, cost reductions within the service sector will help to contribute to a better upstream experience for the industry long-term.