Pigs have long been part of humanity’s culinary history. The first evidence of domesticated pigs can be found in China during the 49th century BC. By the 15th century BC, pigs were being raised in Europe. In 1493, pigs made their way to the Americas because Queen Isabella insisted that Christopher Columbus take 8 animals with him.

At the center of the pork industry is the pig farm. These farms are often run by families, though commercialized farming is also increasing. Most pigs are farmed because they will be eaten one day. Pork products including gammon, bacon, chops, and skin.

#1. There are more than 769 million pigs worldwide right now. About 10% of the pig population is currently living in the United States. (Statista)

#2. About 118 million hogs are slaughtered in U.S. facilities each year. About 6 million hogs and pigs are kept for breeding on U.S. farms. (Statista) 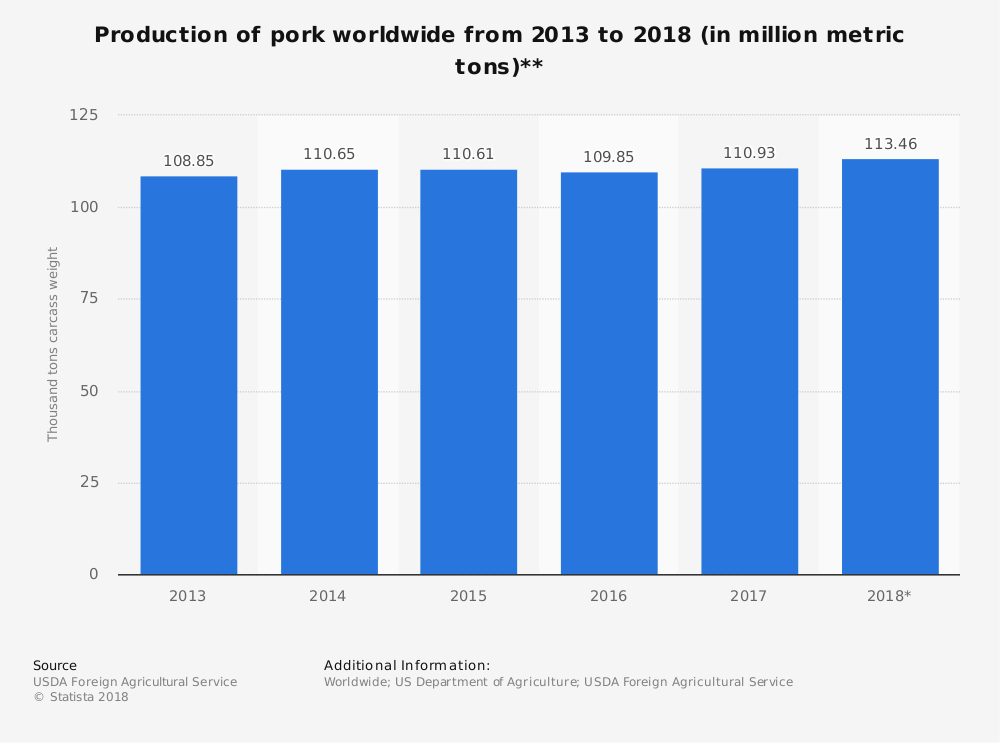 #4. About 24 million tons of pork products are produced in the European Union each year. (Statista)

#5. The total production volume of pork in the United States is much less, at 24.9 million pounds. (Statista)

#6. China is the largest producer of pork products in the world today. Farmers there are able to produce about 50 million tons of pork annually. Over half of the worlds pigs and hogs are now living in China. (Modern Farmer)

#8. There are more than 60,000 pork producers operational in the United States right now. The 118 million hogs marketed represent a total gross value of more than $20 billion in economic impacts. (National Pork Producers Council)

#9. The U.S. pork industry currently supports more than 550,000 direct employment opportunities. When pork exports are included in these figures, another 110,000 jobs are added to the figure. (National Pork Producers Council)

#10. About $22.3 billion of personal income is also supported by the U.S. pork industry. These creates an impact of more than $39 billion to the GDP. (National Pork Producers Council) 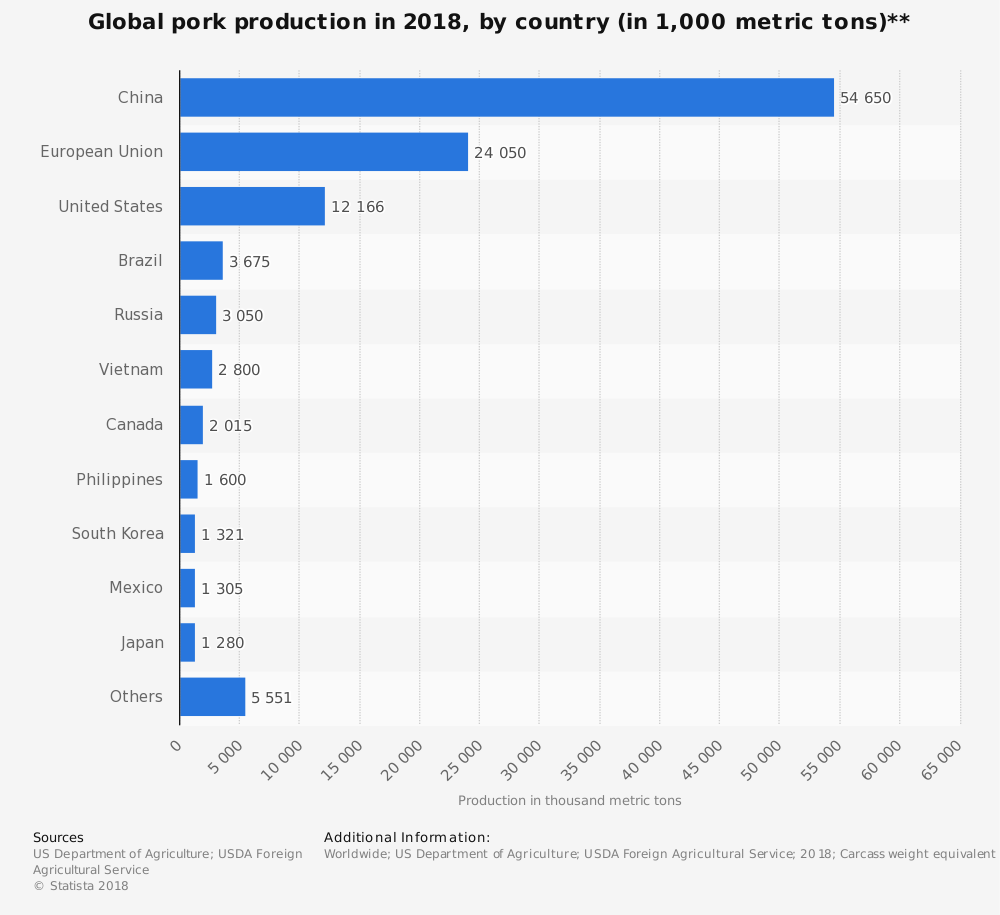 #12. Hog and pig farming accounts for about 6% of the total sales of agricultural products sold in the United States. The top three producing states are Iowa, North Carolina, and Minnesota, who together account for 55% of the value and 56% of the population found in the industry. (U.S. Department of Agriculture)

#13. 90% of the top performing pig and hog counties in the United States are located in Iowa, North Carolina, or Minnesota. (U.S. Department of Agriculture)

#14. Although the value of pork sales has increased since 2012, the number of farms reporting sales of pig and hog products is down by more than 25%. Farms which specialize in hog production have seen even steeper declines, at 29%. (U.S. Department of Agriculture)

#15. Farms which specialize in pork are responsible for 89% of the pig and hog sales which occur in the United States. The total average cost of running a pork farm in the U.S. is more than $850,000, which is 5 times higher than the average for all farms. (U.S. Department of Agriculture)

#16. Even though family farms make up a bulk of the industry, they account for just 41% of the sales generated for the industry. (U.S. Department of Agriculture)

#19. Over 50% of the Canadian production of pork products is exported each year. More than 140 countries receive pork products from Canada. (Canada Pork International)

#20. Older pigs are rarely kept on farms because of their extensive care needs. Older pigs can consume more than 5 gallons of water per day. (Canada Pork International)

#21. 30% of farmers involved with pigs and hogs are under the age of 45, which is about twice the rate of young farmers when all types of farms are considered. (U.S. Department of Agriculture)

#23. Every market hog that is brought to the market represents 371 servings of pork, assuming a 70% yield and 8-ounce services with a 265-pound market weight. (University of Minnesota)

#25. 78% of the pork that is consumed every day has been processed in some way. Processed pork products include sausage, ham, and bacon. (University of Minnesota)

#26. 81% of Americans eat pork on a regular basis, which is defined as having at least one serving within a 14-day period. (University of Minnesota)

#27. Bacon is the most popular pork product included on menus today, with over 2,500 menued items documented. Ham has more than 1,000 menued pork items, while breakfast sausage has more than 500. (University of Minnesota)

#28. Breakfast sandwiches make up 32% of the pork items found on restaurant menus in the United States. Bacon cheeseburgers are the second-most popular at 13%, while cold-cut combos come in third at 10% of all menus. (University of Minnesota)

#30. 37% of homes consume at least one pork sausage product in a two-week period. 35% of homes will eat hot dogs within this same time period, 34% will eat bacon, and 33% will eat lunchmeat ham. (University of Minnesota)

#31. The 7 most common cuts of pork that are consumed in the United States are 16% leaner than they were in 1998. They also contain 27% less saturated fat over this time period. A pork tenderloin is actually lower in total fat than a skinless chicken breast (2.98g vs 3.03g). (University of Minnesota)

#32. 78% of consumers who make their meals at home decide what they’ll have for dinner the day of their preparation. 38% of consumers decide on a meal plan just before they begin to prepare it. (University of Minnesota)

Although the pork industry, from a global perspective, is quite successful, the industry is also centralizing its production areas. China has twice the number of hogs and pigs being farmed than any other market in the world today. For U.S. producers, that creates a challenge which must be addressed in the near future.

Economies of scale are what drive this industry forward. To adapt to this change, pork producers are focusing on breeding outputs, improved farm efficiencies, and targeted consumer products. Through these efforts, the reproduction rates of animals have doubled in the U.S. over the past three decades, even though the overall breeding herd has been reduced by 50%.

Pork prices tend to be cyclical. Demand can ebb and flow. By reducing the supply, pork producers can stabilize market prices to a certain degree. With China being a major producer that is unchecked, however, the traditional methods of farming pigs and hogs may not be profitable any more.