If you’ve worked with a hedge fund in the past, then you may be familiar with the concept of a 2 and 20 fee. That fee represents a 2% management fee and a 20% incentive fee. In reality, the various fees offered by the hedge fund industry are quite variable. One large public pension announced recently that it was moving to a 1 and 30 fee.

The hedge fund is a unique type of investment instrument, with the goal of achieving an absolute return. They use unconventional methods to gain these returns, including short equity, long equity, and relative-value arbitrage.

Hedge fund investors are usually wealthier than the average investor. Some might say they are institutional investors, while others might praise the “sophistication” of this type of investment decision. An investor is required to have a net worth of at least $1 million. Pension funds, sovereign wealth funds, and insurance companies might allocate 10% or fewer of their total investments into this opportunity.

Even the biggest investors often put less than 20% of their total assets into a hedge fund.

#1. Depending on how one defines what a hedge fund happens to be, the industry could be managing anywhere between $800 billion to $3.6 trillion in assets. (Winton)

#2. The hedge fund industry experienced growth of 11.1% since 2013, reaching total revenues in the United States of $85 billion. Those revenues earned are not a reflection of the assets which are under control. (IBIS World) 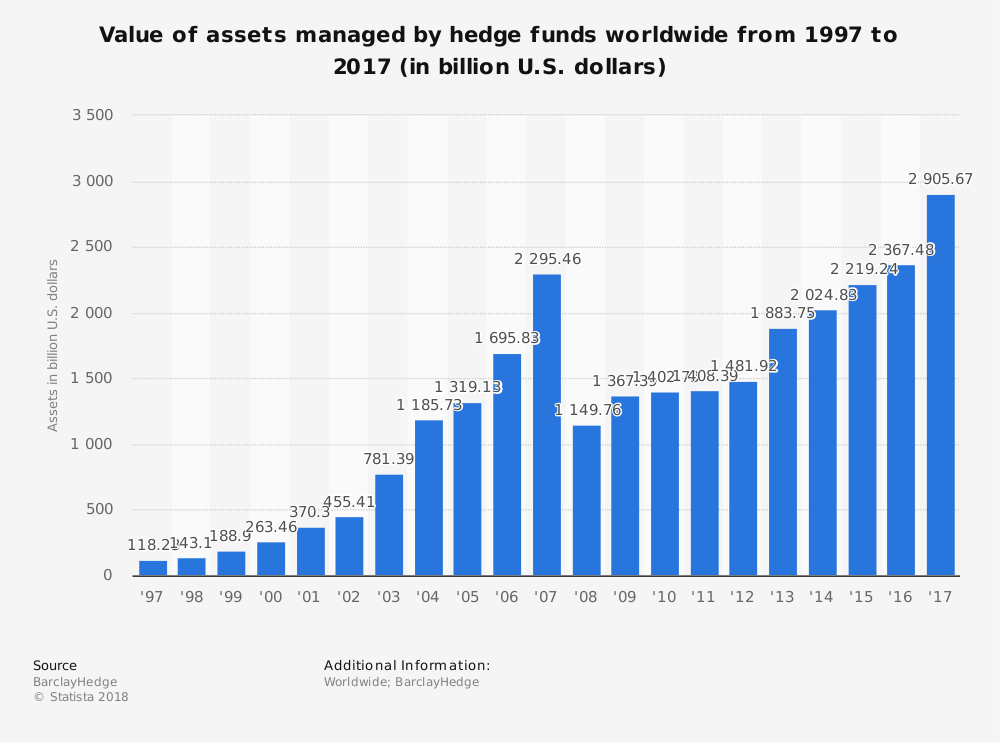 #3. The number of firms managing hedge funds in the United States has grown by 4.6% in the past 5 years, providing over 12% more employment opportunities within the industry. (IBIS World)

#6. 67% of hedge fund investors say that they’re looking to achieve annual returns that are between 4% to 6%. (The Balance)

#7. 22% of investors say that the reason why they avoid using hedge funds as part of their investment portfolio is because of the high fees which are charged. (The Balance)

#8. There are more hedge fund managers located in the United Kingdom than anywhere else in the world. In an employment data survey of over 5,500 managers and 700+ firms, head counts in the U.K. (29) are the highest in the world. U.S. firms have an average head count of 20. For Canada, France, Brazil, and Australia, the average head count in 15. Singapore and Hong Kong have the lowest, averaging just 7 workers per office. (Preqin)

#9. Employees of firms that are managing hedge funds globally fill about 115,000 direct employment spots, making it one of the smallest industries on the global stage. (Preqin)

#10. Total employment for the hedge fund industry reaches 275,000 when companies which service hedge fund firms, such as administrators, auditors, prime brokers, and law firms are included in the total. (Preqin) 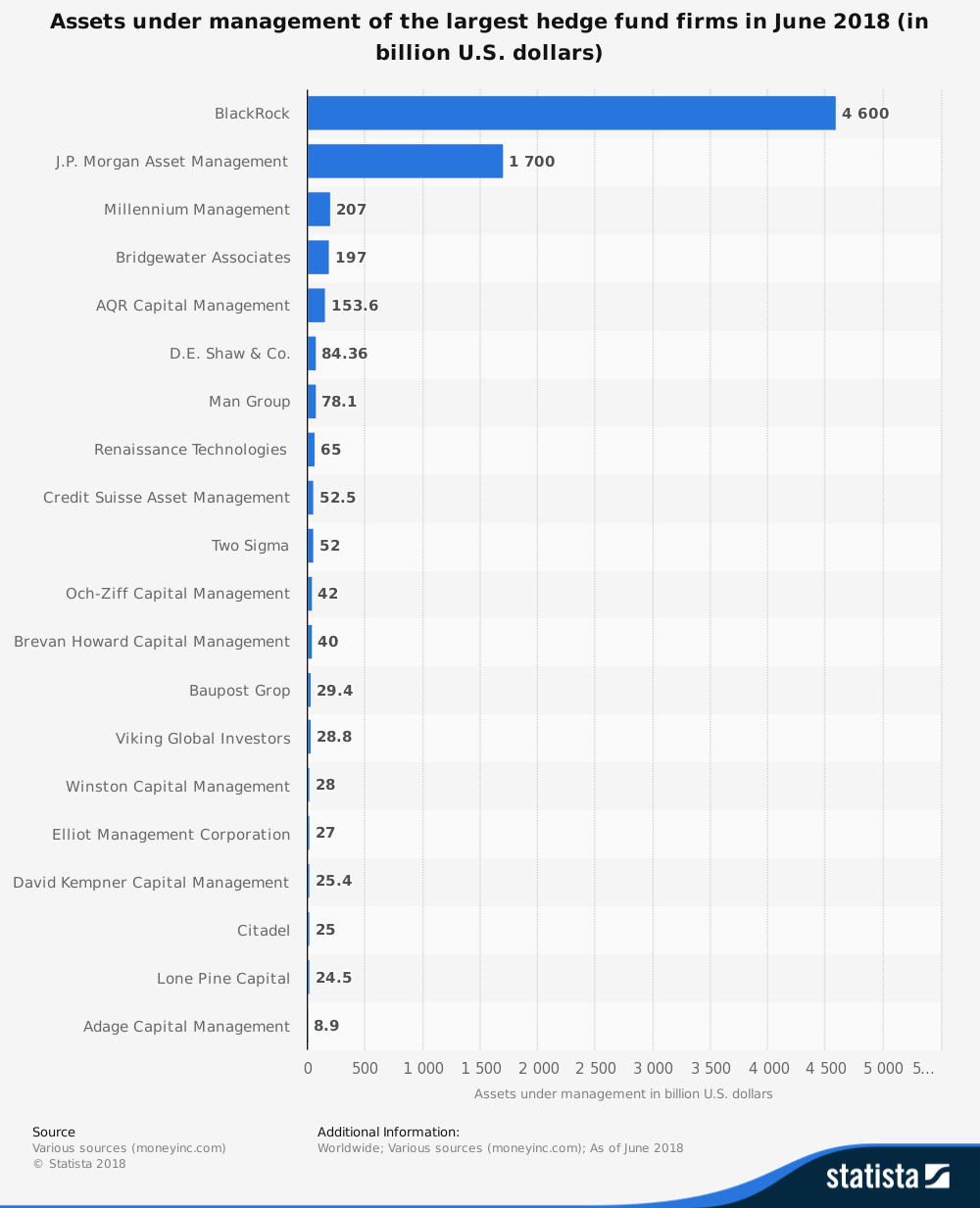 #11. The United States employs five times more people in the hedge fund industry than any other country in the world. (Pensions and Investments)

#12. In 2016, 56% of hedge funds reported positive returns. A total of 1,006 hedge funds launched during the year, but there were also 981 hedge funds which closed. (Visual Capitalist)

#13. Over 5,100 institutional investors are currently allocated to hedge funds. To qualify, investors must have an annual income which exceeds $200,000 for the past two years or their $1 million net worth must exclude their primary residence. (Visual Capitalist)

#14. In 2016, there were 14,500 funds in total that were open to investment. James Simons was the highest-earning hedge fund manager for the year, with an income of $1.5 billion. (Visual Capitalist)

#15. Despite the large market, mutual funds and ETF assets hold a much bigger chunk of the global asset pie. About 95 million individuals invest in mutual funds, which represents 44% of U.S. households. About $19 trillion in assets is held in these investments. (Deloitte)

#17. About 80% of hedge fund assets are provided by endowments, foundations, pension funds, and other qualified institutional investors. (Cerulli Associates)

#18. In total, hedge funds manage about 1.1% of the $90 trillion in global financial assets which are currently under management at any given time. (Retuers)

#19. The Renaissance Nova fund has sometimes accounted for up to 14% of the trading volume which occurs on NASDAQ. This quantitative fund is staffed by only two traders. (Renaissance Technologies)

#21. High-frequency trading firms in the hedge fund industry use microwaves to transmit data about trades because it travels 30% faster than data traveling on fiberoptic cables. (Financial Times)

#23. 70% of the funds managing between $2 billion to $10 billion in assets said that asset growth was their top priority. (EY)

#24. For funds over $10 billion, the top approach to growth was to add new hedge fund strategies (35%). For the $2 billion to $10 billion category, it was to increase penetration in existing client types (28%). Small hedge funds listed accessing new investor bases (43%) as their top priority. (EY)

#25. 54% of investors who qualify for hedge funds say that they’ve considered investing in an emerging hedge fund manager. (EY)

#27. For hedge funds that launched in the past two years 85% say growth in AUM was a positive result, whereas 41% said that the impact made on operations and personnel was a negative result. (EY)

#30. 59% of firms in the hedge fund industry pass regulatory registration and compliance for the fund through their flagship product. 41% say they pass on research costs. 28% pass on research-related travel, while 27% pass on the outsourcing of back office shadowing. (EY)

#31. 55% of firms say that they have not negotiated and are unwilling to negotiate a cap on expense ratios with their investors. (EY)

Alfred Winslow Jones started the idea of the hedge fund. He was a sociologist and journalist who decided to purchase stocks with borrowed money. He believed this would magnify his profits. He also bet against stocks, gaining profits if they lost value over time. In 1949, Jones turned this idea into an investment firm.

Over the next 10 years, his firm gained 670%, when the leading mutual fund at the time gained 358%. A new industry was born.

There are good years and bad years in the world of hedge funds. Since 2008, many investors have been paying their high fees for a performance that would be called lackluster at best. There are always exceptions to the rule, of course, but many funds are struggling just to break even.

Which is why those that can do it will – if they don’t mind the fees. With a potential of $3 trillion or more in assets being managed, these funds help to build real wealth. As an industry, even in the down years, the management fees generate enough income to make sure that everyone is comfortable.