Luxottica is the leading optical retailer in the United States in the eyewear industry. The brand currently operates over 4,600 stores, generating about $2.5 billion in retail sales each year. They are the largest company in the world, responsible for top brands like Oakley, Ray-Ban, and Versace. Their global sales totaled $8.8 billion each year.

Although there is a push by the eyewear industry to start selling products online, the vast majority of sales for active firms still involves the old-fashioned process. Consumers must visit their eye doctor, receive a prescription, and then start the shopping process. Even with frames sold directly by their physician, it is taking much longer for this industry to transition online than most other kinds of products.

Prescriptions are a meaningful obstacle for this industry. Even if information about eyesight could be obtained through other means, a measurement called the “pupillary distance” is necessary for the proper grinding of eyewear lenses. Without this information, it would be almost impossible to create a functional pair of glasses.

Despite these challenges, the eyewear industry continues to grow in several segments.

#1. The total vision care market in the United States is currently valued at $34.45 billion. The value of the global market for eyewear in 2017 was almost $115 billion. (Statista)

#2. 5.7 million units of Plano sunglasses were sold online in the United States, generating more than $218 million in sales for the year. (Statista) 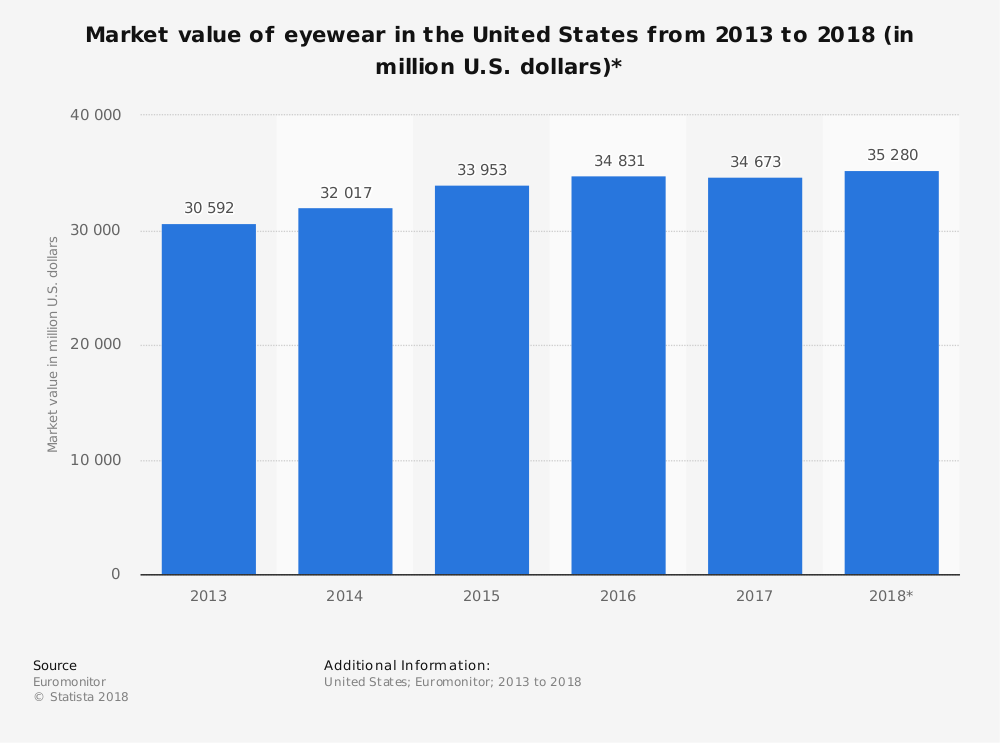 #3. The retail sales market for lenses within the eyewear industry totals $10.4 billion each year, while contact lenses generated another $4.02 billion in sales for the industry. (Statista)

#4. Consumers will spend an average of $125 for their eyeglass frames if they are shopping in the United States for their eyewear. (Statista)

#5. About 17% of the contact lenses which are sold each year come from an online purchase. (Statista)

#6. About 217 million people have a vision impairment that qualifies them for some type of corrective lenses of moderate to severe correction around the world. One of the most significant causes of the increase in vision problems is due to computer vision syndrome, which changes the focal point for a person’s eyes. (Mordor Intelligence)

#7. The average cost of frames which are manufactured by Luxottica is $25 from a production standpoint, but top brands can charge upwards of $500 at the retail level for the final product. (Forbes)

#8. The retail sales of eyewear frames in the United States totaled $9.7 billion in 2016, in addition to the $10 billion generated by the lenses which are inserted into those frames. (Statista)

#9. Sunglasses make up about 10% of the revenues that vision care retailers generate each year. The average person will spend less than $20 on a pair of sunglasses, more than $100 less than they pay for a pair of prescription glasses. (San Francisco Chronicle)

#10. Luxottica earns 64 cents of gross profit for every dollar that it spends on the manufacturing of its frames, with a net profit of 52 cents for each dollar. (Wall Street Journal) 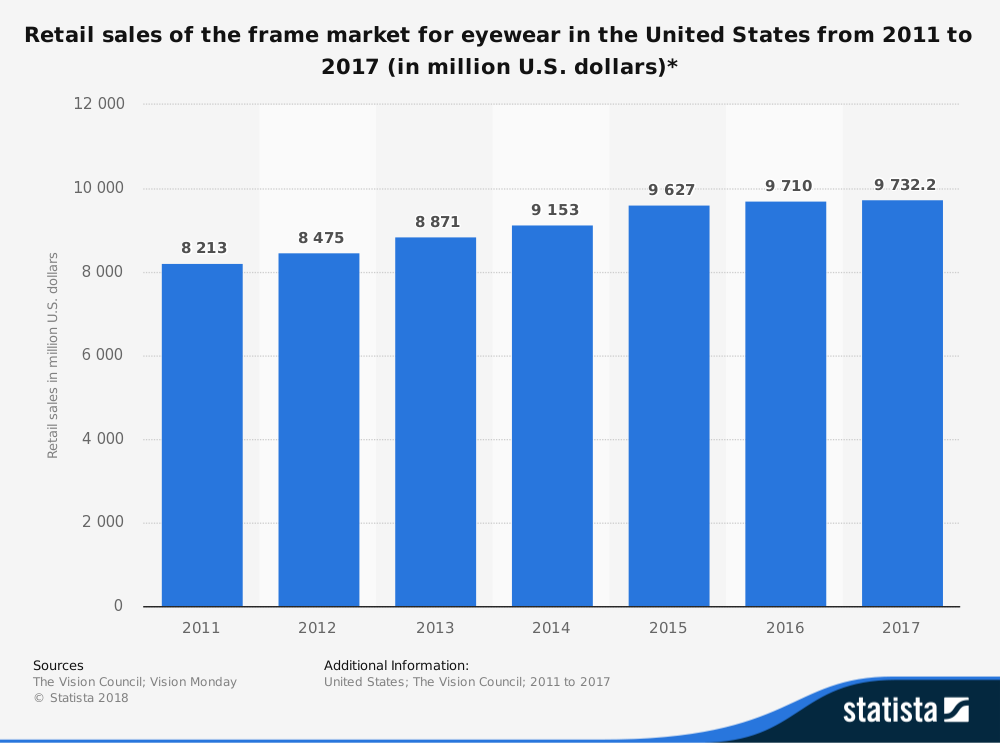 #11. There are wholesale distribution opportunities from Luxottica for eyewear products in over 150 different countries, averaging just 1 distributor or subsidiary per nation for their network. (Cornell University)

#12. Luxottica currently operates 700 franchises that are not counted in their retail location numbers, but do have their revenue figures contributing to their announced financials. (Cornell University)

#13. There were 8 million pairs of prescription eyeglasses sold online in 2017, representing about 4% of the total market for this segment. (Forbes)

#14. Almost 50% of the online eyeglass market is dominated by a little-known company called Zenni Optical, creating $176 million in revenues as a privately-held company which has never raised any outside capital to support their business functions. They’ve sold over 20 million pairs of eyeglasses since their inception. (Forbes)

#15. About 10% of the prescription eyewear work performed by the industry involves a change to a prescription or an adjustment to the frames after the customer has already used the product for some time. (Forbes)

#16. Costco, Walmart, and the Refac Optical Group currently control almost 45% of the optical goods stores found in the United States. 39% of these locations are owned by Luxottica, while National Vision operates 8.2% of active sites. (Cornell University)

#17. Fashion labels represent 35% of the retail sales generated by the eyewear industry each year. That places the premium fashion segment of this industry at a value which falls just under $13 billion each year. (Business of Fashion)

#18. Safilo holds licenses for some of today’s top fashion brands, employing over 150 designers to bring over 3,000 different eyewear options that are new to the market each year. They work through a network of over 90,000 different wholesale providers. (Business of Fashion)

#20. About 188 million people in the United States currently wear eyewear products on a regular basis. 91% of adults above the age of 55 are using glasses of some type to correct their vision. (The Vision Council) 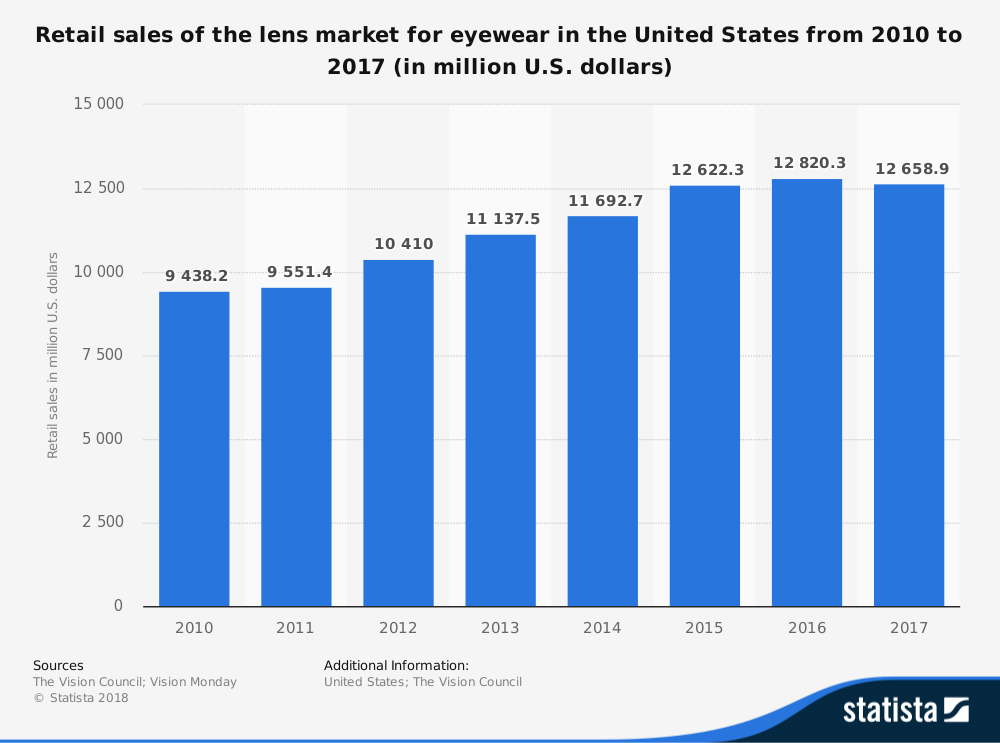 #21. 67% of women and 61% of men in the United States are currently wearing eyeglasses of some type. People living in homes with an HHI above $60 are three percentage points more likely to wear them than those living in a more impoverished household. (The Vision Council)

#22. 46% of the U.S. adult population received an eye exam in the past year, representing almost 114 million appointments that generated about $6 billion in revenues. (The Vision Council)

#24. 32% of the revenues earned by small businesses in this industry come from the sales of frames. Another 29% comes from either prescription lenses or lens treatments. Eye examinations represent about 17% of SMB industry revenues. (IBIS World)

#25. About 90% of all workers who use computers, laptops, tablets, or smartphones on a regular basis for their duties will require services from the eyewear industry because of their condition. That’s equal to the percentage of adults above the age of 55 who need corrective lenses too. (IBIS World)

#26. Around 80,000 employees currently hold a full-time position (or equivalent) in the U.S. eyewear industry today. Employment growth over the next five years is expected to be about 2%. (IBIS World)

#27. 41% of the retail sales which occur in the eyewear industry come from consumers above the age of 55. Another 28% of sales come from customers between the ages of 15-34. Kids 14 years or younger represent just 5% of the earnings opportunities for the industry. (IBIS World)

#28. Customers in the 35-54 age demographic represent 26% of the retail sales generated by the eyewear industry in the United States. (IBIS World)

#29. New York State offers the most retail establishments for the eyewear industry, representing over 10% of the total locations. California comes in second with 8.8% of the industry, followed by Florida with 8.7% of the sites. (IBIS World)

#30. About 50% of the firms which are active in the eyewear industry employ fewer than 20 people, with the typical SMB employing about five. (IBIS World)

#31. 39.5% of the costs handled by the eyewear industry involve purchases, which is almost 50% less than the average cost of all industries in all sectors. Wages, rent, and utilities are the primary expenses outside of purchasing for the average business.

The eyewear industry offers strength on three specific fronts: a high upcharge on strong brands, increased access to medical care, and improved shopping methods for consumers. Despite there being several obstacles in the way for a consumer to purchase eyewear, the industry continues to see a consistent pattern of growth that averages about 5% per year.

It is an exciting industry because it offers mature market stability with emerging market opportunities. Although Luxottica currently holds a dominant portion of the manufacturing business, there are numerous opportunities for a disrupter to get involved. The online sales segment is a perfect example of this, with Warby Parker being a known brand, but a majority of sales going to an unknown provider.

Improved information access will help consumers embrace more online purchases. As Millennials continue aging in the next decade, a surge in new business will start heading toward eye doctors, eyeglass manufacturers, and lens makers. Expect real strength to continue with this industry for the time being unless some type of innovation makes the products become obsolete.