Over the past two decades, the economic output in China has grown ten-fold. There are now more than 300 million Chinese who are classified as a middle-income household today compared to figures from 1990. Millions more are now classified as being wealthy. Although asset management rates have grown as market economy efforts have transformed the nation’s economy, the growth of the China mutual fund industry is lagging behind overall economic growth.

A majority of Chinese households are best described as savers instead of investors. Out of the RMB 145 trillion in financial assets that are available, only 3% are actually held in mutual funds.

By 2020, the assets under management are expected to reach RMB 24 trillion. As of today, however, that figure hovers around the RMB 4 trillion range. With foreign managers now able to take the majority ownership of a Chinese fund management entity, times are changing. Savings rates are above 50% for households in the country. The new priority is to create more investments.

#1. The assets under management of mutual funds in China grew 32.5% in 2018 to reach a total of $1.69 trillion. Money market funds grew by 56% during the same time, now accounting for 63% of the total assets held. (Fund Selector Asia)

#2. Tinahong Yuebao is the largest mutual fund in China, accounting for almost 15% of the nation’s assets in mutual funds in 2017. In 2016, this fund was responsible for 10% of the country’s assets. Its current value is listed at RMB 1.58 trillion. (Fund Selector Asia) 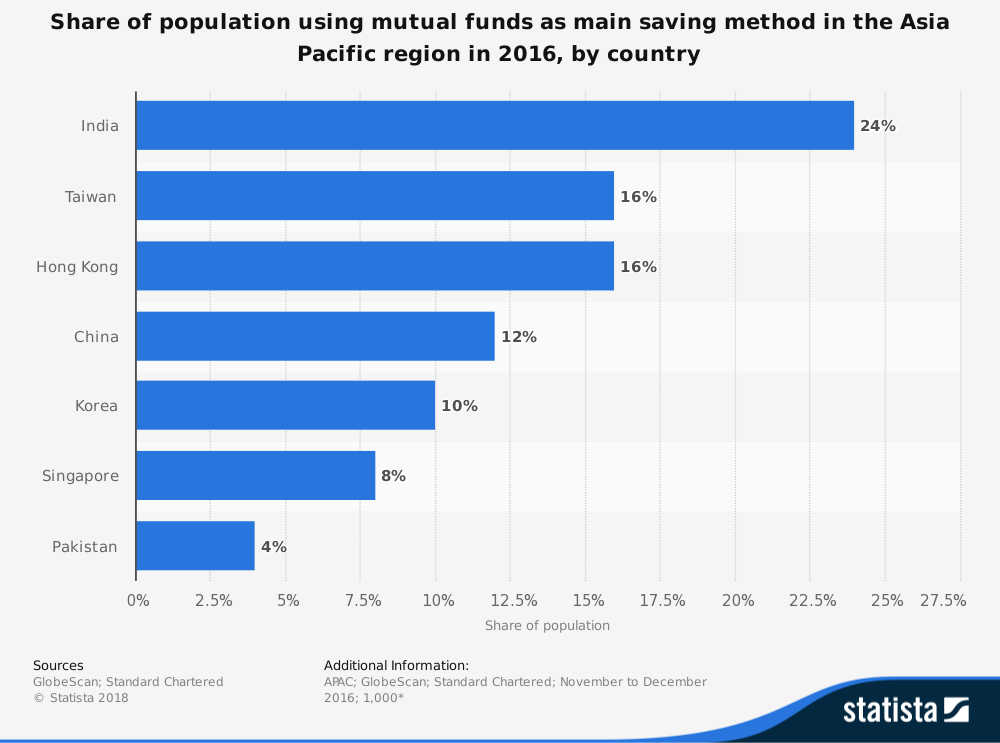 #4. Commodities and alternative mutual funds were the only other options which saw positive net cash flows in 2017. Allocation mutual funds saw the most significant negative cash flows at RMB 269.9 billion. (Fund Selector Asia)

#7. Since the introduction of the Qualified Domestic Institutional Investor Program in 2007, about 35% of the mutual funds have not returned to their value at the time they were issued. Over 50% are underperforming their pre-cost benchmarks. (Marsh and McLennan)

#8. 60% of the growth anticipated by the China mutual fund industry comes from retail investors, with the remainder coming from institutional investors. (Marsh and McLennan)

#10. New regulations allow pension funds in China to allocate up to 20% of their investments into securities. Most mutual funds hold less than 7%. For insurance firms, up to 15% of foreign investment is allowed in the portfolio, but currently allocations are as low as 1%. (Marsh and McLennan)

#11. Some of the profits available within the China mutual fund market are in the 30% to 40% range, making it a highly lucrative market for domestic and international investors. (IPE Magazine)

#12. There were 116 mutual-fund asset management firms that were registered with the AMAC (Asset Management Association of China) as of February 2018. Of those 71 of them were domestically owned, while the other 45 were listed as joint ventures. (IPE Magazine)

#14. 68% of the funds which are available for management in China are held in trusts. Although previous research suggests up to 28% may be held in mutual funds, current research indicates otherwise. (Citibank)

#15. Information technology has grown at the fastest pace of all sectors within the China mutual fund industry, approaching 20% growth in 2017. Leasing and commercial services came in second, at just 10%. Transportation and storage is the only sector to achieve more than 8% growth. (Emory University)

#16. If the mutual fund industry in China reaches a total value of $7.5 trillion, it could create fee pool for operating mutual funds that would be valued at more than $42 billion. That would create a lucrative new revenue stream for international managers who already have an established presence in the region. (Financial Times)

#17. China is currently ranked as the second-largest mutual fund market, behind only the United States. Since 2010, several new mutual funds have been introduced to the industry, which is a different approach compared to the U.S. market that is hesitant to introduce new funds. (Financial Times)

#18. Fewer than 5% of Chinese households are believed to have assets under management using mutual funds. (Financial Times)

#19. Foreign asset managers own a minority stake in 19 of the 30 largest mutual fund companies in China, with many of these relationships including a partnership with a domestic commercial bank. (Financial Times)

#20. More than $17 trillion in assets is currently held in unregulated wealth management products in China. Those funds are immediately eligible to be transferred to mutual fund opportunities for most households. (Financial Times)

#21. Chinese retail investors currently own about 54% of the shares which are freely traded on the local A-shares market. Equity ownership be institutional investors is expected to increase as more shares move toward international benchmarks and domestic pension funds. (Financial Times)

#22. About 30 fund management firms have filed applications to have a fund of funds market, joining six companies which have already been approved by the China Securities Regulatory Commission. Up to $121 billion (RMB 800 billion) could be funneled into these products. (South China Morning Post)

#23. There are currently 4,000 funds now managed by the mutual fund houses in China, with total assets at the end of 2018 anticipated to be RMB 10 trillion. (South China Morning Post)

#24. At the beginning of 2018, 40 of the guaranteed funds posted investment losses for the China mutual fund industry. (South China Morning Post)

#26. Fundraising for stock investments in China reached a total of RMB 22.3 billion in 2016, accounting for just 7.2% of the total fund value. Retail investors are hesitant to work with mutual fund managers with the recent reputation for losses within the industry. (South China Morning Post)

#27. About 80% of the APAC region’s total net assets in money market funds were held in funds that were located in China at the end of 2017. (ICI)

As wealth in China continues to accumulate, look for more domestic investors to explore the option of mutual funds. Until then, many households will look to offshore investment opportunities to shelter their wealth from the potential grip of government oversight.

Even if a six-fold increase in assets under management occurs over the next 5-year period, the use of mutual funds in China will continue to lag behind the growth experience by the overall economy.

To succeed, the fund management companies in China must do better. At the end of 2013, over one-third of the companies were loss-making, with most of them carrying products that are best described as sub-scale funds. Many were even struggling to stay above the statutory minimum to maintain their status. Those who have been successful are the managers who kept existing assets in established funds while acquiring new assets by using other funds.

With stability will come additional investments. If that stability doesn’t come, the China mutual fund industry is anticipated to struggle in meeting its overall goals.