Biofuels are a liquid fuel that can be derived from a biomass. Biofuels are intended to replace options like coal, propane, or natural gas. Soybeans, switchgrass are specifically grown to create biofuels in the United States. Ethanol can be created from corn and sugarcane.

If the world switched to biofuels, greenhouse gas emissions could be reduced by nearly 2 billion tons per year. That would eliminate about 80% of the emissions that are directly connected to our current transportation needs.

#1. Ethanol in the United State is derived from corn kernels that are processed and fermented. In 2011, about 96% of the ethanol produced in the U.S. came from this method. (University of Michigan)

#2. Brazil and the United States produced about 85% of the world’s ethanol in 2016. Unlike the U.S., Brazil produces most of its ethanol by using sugarcane. (University of Michigan) 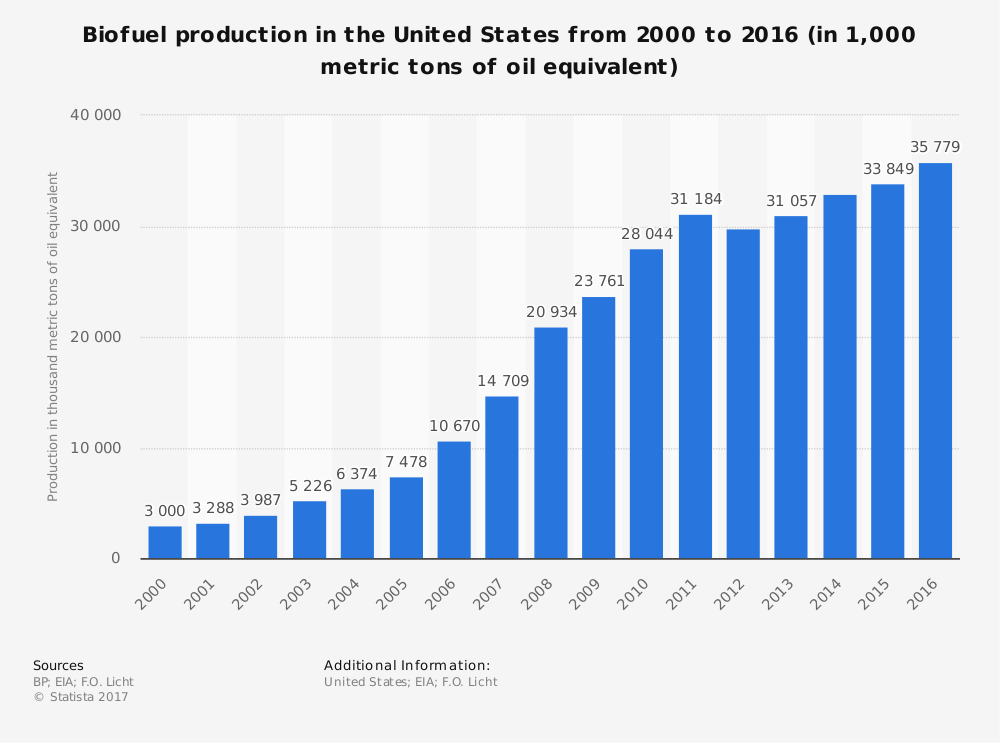 #3. Europe and China are the next leading producers of ethanol in the world from 2016 figures, accounting for 5% and 3% of total production respectively. (University of Michigan)

#4. 37% of the U.S. supply of corn, a total of 5.2 billion bushels, were directed toward ethanol feedstocks. (University of Michigan)

#5. Algae could produce up to 300 times more fuel per acre when compared to other crops when it is directed to biodiesel. (University of Michigan)

#6. American petroleum consumption averaged 20 million barrels per day, with 1 in 4 barrels imported. As of 2017, there were 200 ethanol refineries operating in the U.S., with 3 being constructed, along with 90 biodiesel production facilities. (University of Michigan)

#8. Biofuels are not as energy-efficient as petroleum fuels, which has caused them to be unpopular in certain regions – especially the United States. If a flex-fuel vehicle runs on E85 fuel, which is 85% ethanol, it sees up to a 30% reduction in its fuel economy. (University of Michigan)

#10. The biodiesel industry directly employs about 64,000 people in the United States. (National Biodiesel Board) 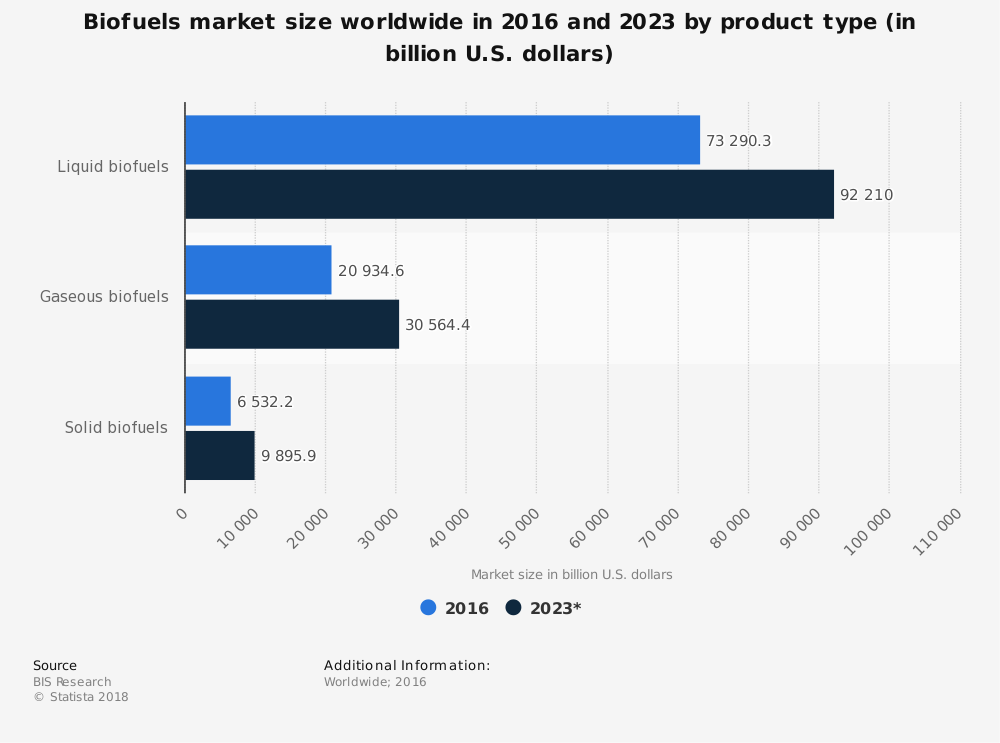 #11. When biodiesel is used to replace traditional diesel, greenhouse gas emissions can be reduced by up to 86%. (National Biodiesel Board)

#13. Because of falling production levels in Brazil, global ethanol production only increased by 0.7% in 2016. In comparison, biodiesel production rose by 6.5% because of increases from the Indonesia market. (British Petroleum)

#14. In 2016, biofuel production was the equivalent of about 82 billion metric tons of oil equivalency worldwide. (Statista)

#15. Since 2010, there have been more than 8 million vehicles on U.S. roadways which qualify as a flexible fuel vehicle. (U.S. Bureau of Labor Statistics)

#16. As of December 2012, just 11% of retail fuel stations in the United States offered an alternative fuel, such as E85. (U.S. Bureau of Labor Statistics)

#17. In 2012, a survey of U.S. fuel stations revealed that there were about 700 retail locations that offered a biodiesel product. (U.S. Bureau of Labor Statistics)

#18. About 12,000 people are directly employed by the biofuel industry in the U.S. in jobs that are directly related to green goods and services. (U.S. Bureau of Labor Statistics)

#19. Ethanol production in the United States supports more than 400,000 jobs. The production of 1 billion gallons of biodiesel is known to support another 40,000 jobs in the U.S. biofuels sector. (U.S. Bureau of Labor Statistics)

#20. Biochemists and biophysicists earn an average of $63,000 per year in the United States. Chemists earn an average salary of $75,550 annually. Chemical technicians earn the least, averaging just under $50k per year. (U.S. Bureau of Labor Statistics) 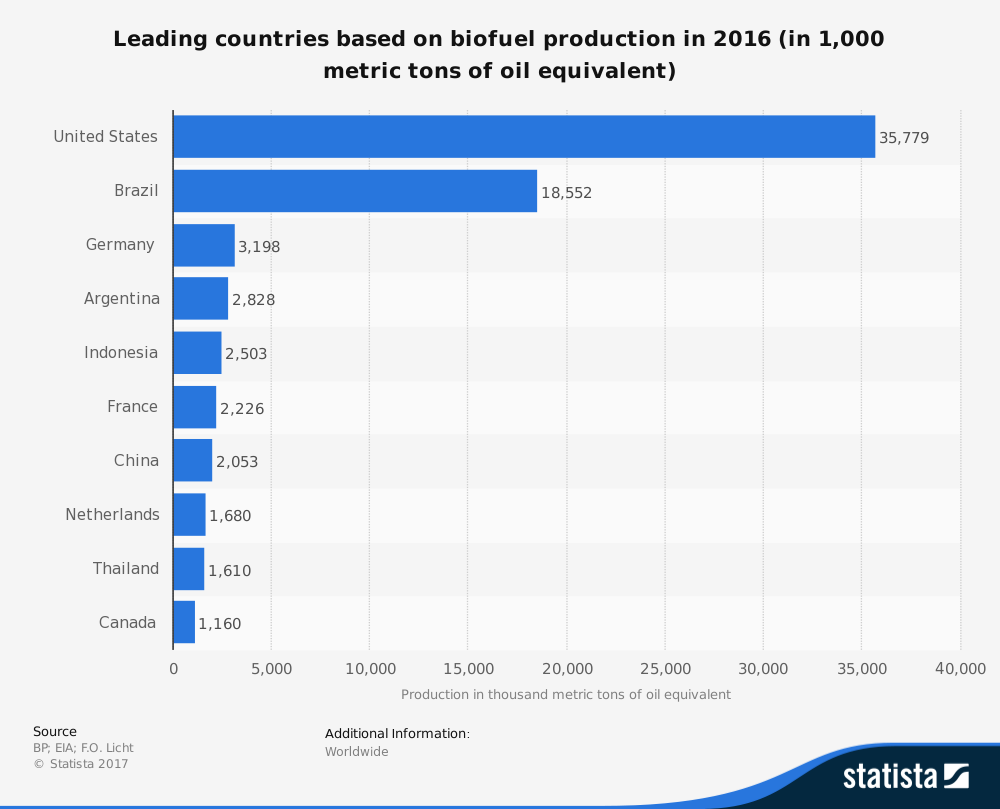 #21. About 14 billion gallons of biofuel are consumed in the United States each year. (Economic Research Service)

#23. Bioenergy supplies about 10% of the global energy supply today and is up to 18% of the total renewables that are available for energy. (World Energy Council)

#25. Several billion tons of straw are available to the biofuel industry, but less than 100 million tons is actually used to produce fuel. The majority of it is either burned to dispose of it or it is allowed to rot. (World Energy Council)

#26. Europe and the Americas contribute more than 70% of the consumption of biofuels that are used for electricity consumption. (World Energy Council)

Biofuels may not have grown as rapidly in 2015-2016 compared to previous years, but the next decade offers a lot of promise. Outside of the United States, there has been a big push to transition toward renewable fuels that do not contribute high levels of emissions. That has created a bigger market for the U.S. and Brazilian ethanol markets, which offers employment opportunities for each market.

In the U.S., E15 fuels have been approved for use since 2001. Unless the vehicle is branded as a flex fuel option, however, there are concerns about how the fuel could affect engine performance. Vehicle manufacturers are even concerned about warranty issues. That has limited U.S. consumption to 10% or under.

As energy independence is sought, biofuels offer a lot of potential. Emerging fuel options, such as those from algae, could potentially eliminate the need for fossil fuels one day. That is why the various industry segments in biofuels routinely see consistently high investments. It is a proven fuel option with a lot of future potential.