#1. The average person in the United States will consume almost 3 gallons of wine each year. This figure has been trending upward since 2014. (The Wine Institute)

#2. High-income households and adults above the age of 65 are the most likely to prefer wine as their top beverage, with 37% and 42% respectively choosing wine. (Harris Poll) 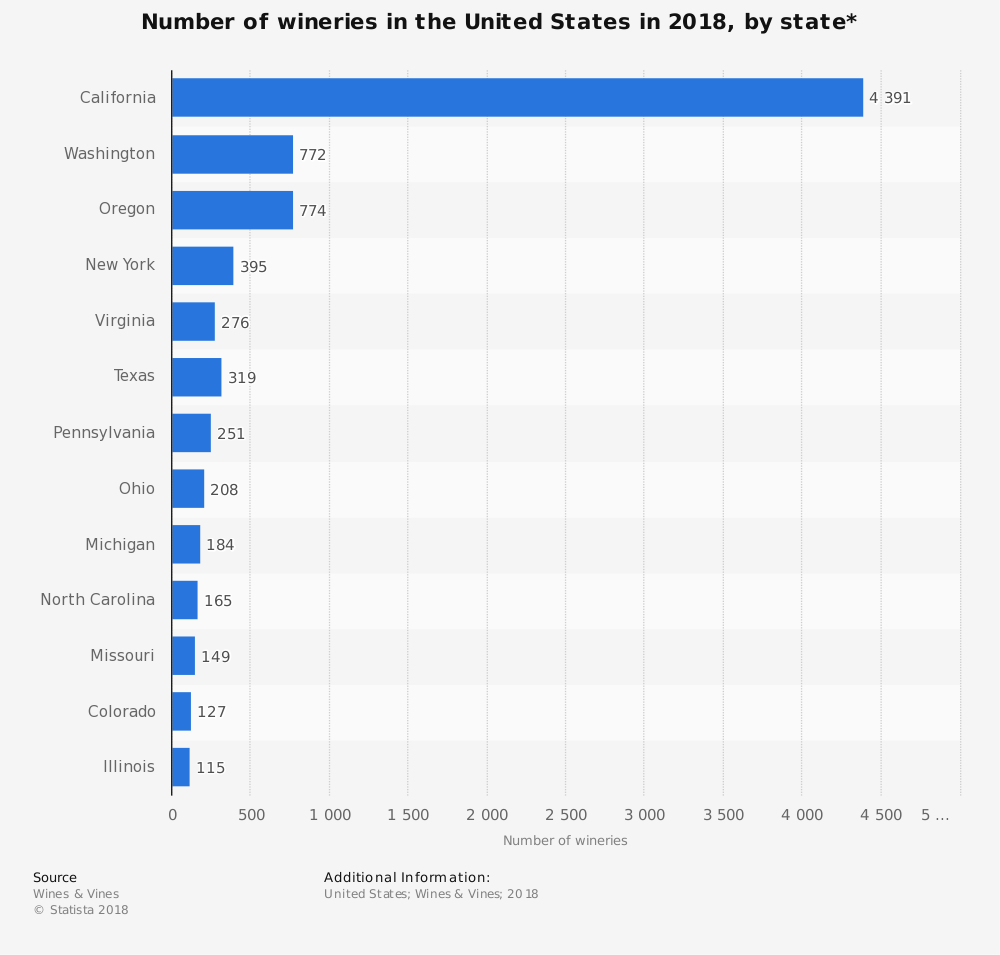 #4. 71% of wine that is consumed in the United States is produced domestically, even though wine is most often consumed at Italian eateries. (Wine Enthusiast)

#5. More than 1 million wine labels are part of the global winemaking industry. About 150,000 winemakers create these labels, producing a total of 36 billion bottles of wine each year. (Dee-Wine)

#7. 84% of the most famous wine labels in the world today come from French winemakers. (Mordor)

#8. If California were its own country, it would be the fourth-largest winemaker in the world today. 85% of wines that are created in the United States come from the state. (Wine Institute of CA)

#10. 278 million 9-liter cases of wine were sold by California winemakers in 2017, including international exports. 90% of the wine exports sold by the United States originate from California. (The Wine Institute) 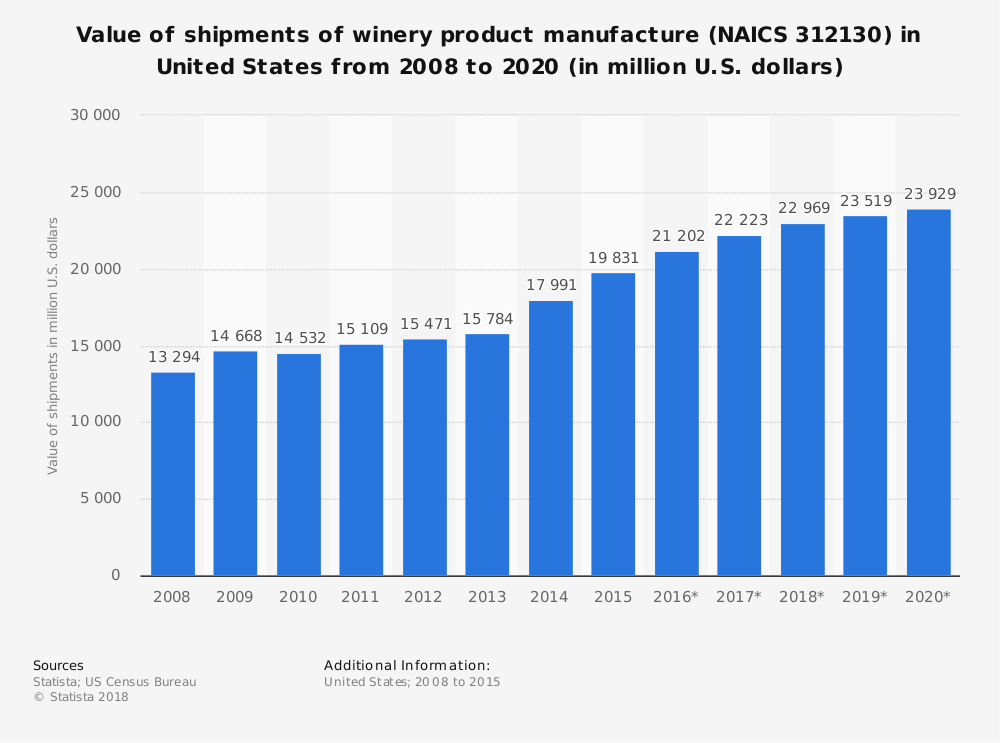 #11. Direct-to-consumer sales is a growing trend for the winemaking industry, accounting for $2.7 billion in retail value in 2017. (The Wine Institute)

#12. In the United States, there are 20% more locations selling wine compared to 2007. (The Wine Institute)

#14. Europe purchases over $550 million worth of wine exports from the United States annually. Canada comes in second, purchasing over $440 million in exports. Hong Kong, Japan, and China all purchase at least $75 million in wine exports annually as well. (The Wine Institute)

#15. In 2016, there were 602,000 acres of vineyard planted in California to support the winemaking industry. About 23,000 of those acres were reported as being non-bearing. (The Wine Institute)

#16. Italy continues to lead the world in terms of total winemaking for the global industry. About 4.95 billion liters were produced in 2015, contributing 17.4% to the total amount of wine produced. France, Spain, and the United States all produce more than 10% of the global total as well. (Trade Data and Analysis)

#17. Global wine production dropped by 8% in 2017, with a total of 247 million hectoliters produced. This represents the lowest production levels seen by the winemaking industry since 1961. (The Guardian)

#18. Wine production in 2018 was off by 40% in vineyards based in the Bordeaux region in France. Some chateaus in the region lost up to 90% of their expected harvest. (The Guardian)

#19. There are currently about 10,000 wineries located in the United States. About 4,400 of these wineries are located in California. (Statista)

#20. Worldwide, there are 7.6 million hectares of planted vineyard surfaces which help to form the foundation of the winemaking industry. (Statista) 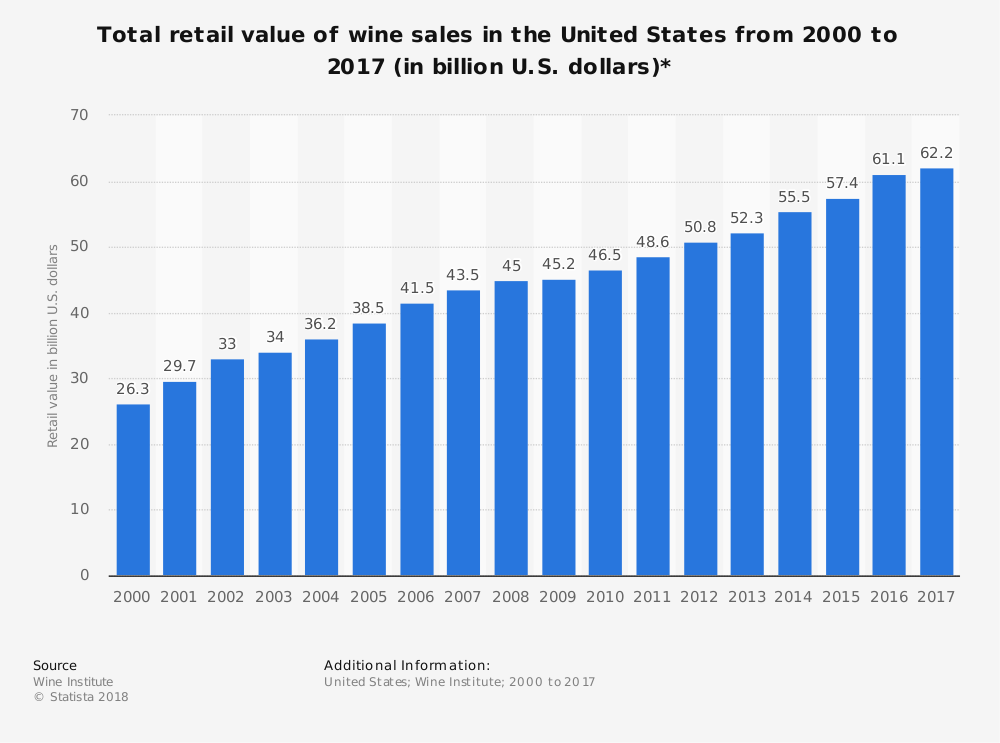 #21. The gross margin on the winemaking industry in the United States is 56.7%. The leading brand of table wine in the U.S., based on sales, is Barefoot. (Statista)

#22. Spain is the world’s leading exporter of wine, with over 950,000 hectares of vineyards planted to support the industry. (Statista)

#23. There are over 900 wineries located in Washington State and over 350 wine grape growers. With nearly 70 different varieties produced, the state ranks as the second-largest premium wine producer in the U.S. as of 2017. (Washington State Wine)

#25. Two-thirds of the winemaking industry in Washington produces red wines. The focus on the premium market occurs because Washington receives an additional hour of sunlight in the prime growing months compared to California. (Washington State Wine)

Wine is a preferred beverage for households, even when economic times are somewhat difficult. In the value category, a bottle priced at $10 or less is used as a celebration, paired with a meal, or consumed for personal preferences. It is not completely recession-proof, though the expectation is that the winemaking industry will continue to flourish.

Changing weather conditions around the planet do sometimes affect the amount of wine being produced. In 2017, for example, wine prices spiked because the industry experienced the worst global harvest in over 50 years. Some labels saw wine prices increase by more than 30%.

Even with a shortage of 3 billion bottles on the global market, the winemaking industry experiences high demand levels. That means the industry will continue to see chances for additional profitability, even as new markets begin to emerge to provide competition.

Wine has been long part of the human experience. Nothing is going to change that in the coming months and years.