The first libraries began appearing in human societies around the 4th century BC. With the idea that books should be collected, booksellers began to appear in earnest. By the time of the Roman Empire began to fade in its influence, bookstores were a flourishing industry that continued on until the invention of the printing press.

This influence would continue on until the internet made it possible to gain more independence in the bookselling process. Authors could self-publish with greater ease. Affiliate programs allow anyone to generate income by promoting books online. For some time, the e-book industry looked like it might bankrupt the entire bookstore industry entirely.

People never fell out of love with books. More people prefer a book, in fact, than they prefer an e-book.

#1. In 2015, the global book industry was valued at $113 billion. More than 2.7 billion books are sold in the United States each year, making it the largest retail market in the world. (Statista)

#2. The bookstore industry helps to support over 780,000 new self-published books each year. Amazon CreateSpace is the largest self-publishing company within the industry to-date. (Statista) 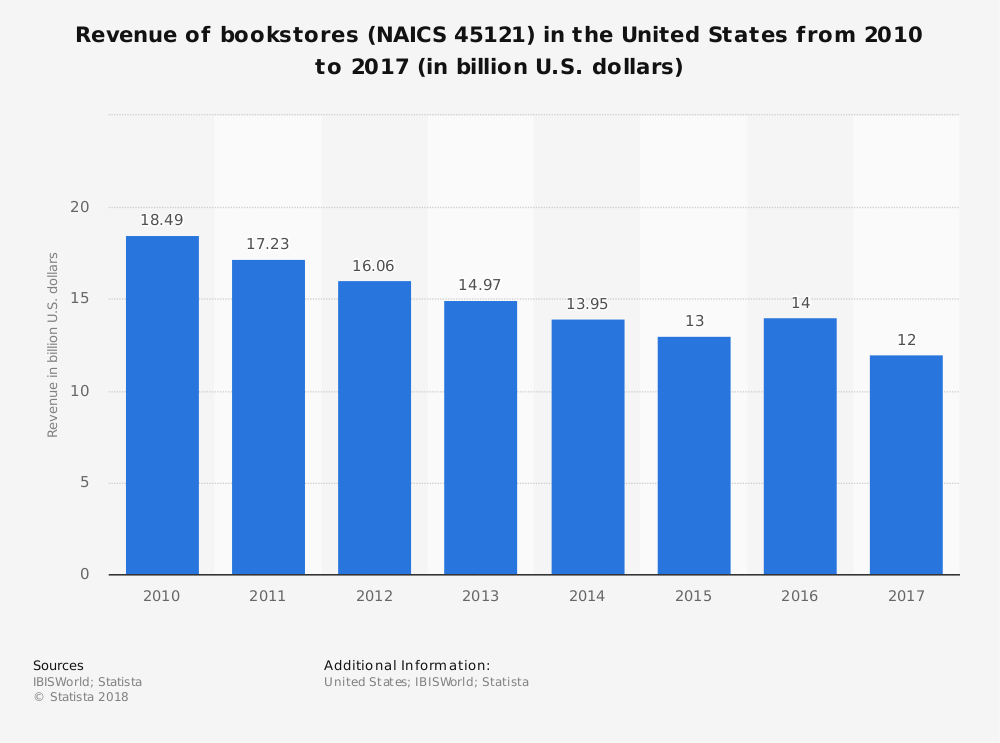 #3. The estimated annual expenses of book publishers in the United States is over $17.2 billion. (Statista)

#4. There are more than 2,300 independent bookstores currently operating in the United States. The combined industry generates about $750 million in retail sales each month. (Statista)

#5. In the last 3 months, about 141 million people have shopped for books at a bookstore at least once. (Statista)

#6. Religious books generate about $416 million in retail sales each year. In comparison, Barnes and Noble generates about $3.7 billion in revenues annually. (Statista)

#7. There are currently more than 45,000 writers and authors represented by the bookstore industry at any given time. About 84% of people in the 18-29 age demographic have read at least one book in the past year. (Statista) 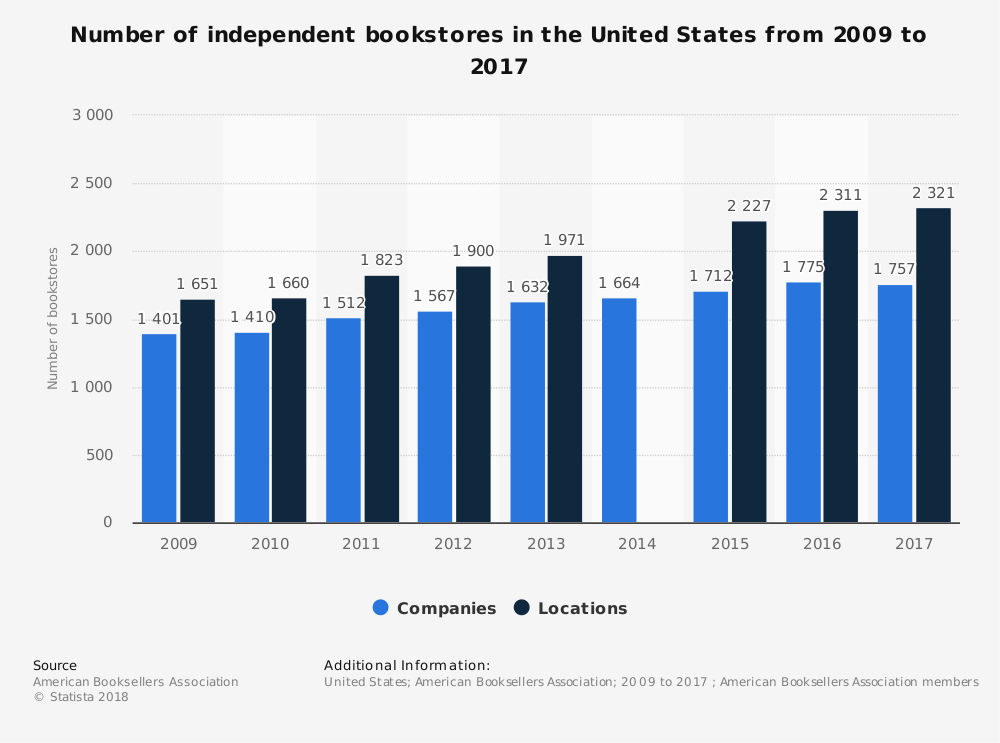 #11. There are about 11,000 bookstores in total in the United States. Although this is a 12% drop from the number of stores present in 1997, it shows that there is stability within the industry. (Open Education Database)

#12. There are many more bookstores available now in the U.S. compared to generations past. In 1931, there were an estimated 500 bookstores in operation, though about 4,000 stores sold books of some type to generate revenues. (Open Education Database)

#13. Amazon has a 23% market share of the book market. Barnes and Noble has a 17% share of the market for book retailers, making it the largest true bookstore industry member. (Open Education Database)

#14. Middle-aged consumers spend the most on books, up to 33% more of their income compared to other age demographics. People living in the U.S. West spend over 40% more on books each year compared to the national average. (Open Education Database)

#15. Barnes and Noble saw a 6.4% decline in book sales for the 9-week period that ended on December 31, 2017. That figure was equal to the decline in sales for the overall bookstore industry over the same period. (Forbes)

#16. Bookstore sales for some brands were down by 60% in mall-based locations. (The New York Times)

#17. In 2017, Hastings Entertainment, which operated 123 stores as a books, music, and video games retailer, declared bankruptcy and then ceased operations. Family Christian Stores closed as well, with 240 locations affected. Book World, a 45-store chain based in the U.S. Midwest, shut down as well. That leaves Amazon, with 15 physical bookstore locations, as the fourth-largest chain in the United States. (The New York Times)

#20. Since 2013, traditional book publishing has seen a 3% increase in print book sales. Amazon’s print sales increased by 15% in 2016, driven by internal discounts. At the same time, Barnes and Noble experienced a 6% decline in sales. (Jane Friedman)

#21. Fiction sales for booksellers are about 50% digital for traditional publishers, even though e-books are about 25% of all book sales. (Jane Friedman)

#22. 8 of the top 20 sellers for the Kindle platform came from Amazon’s own publishing imprints. Amazon currently owns 13 active imprints and publishes more than 2,000 titles each year. (Jane Friedman)

#24. To counter higher wages and rising costs, bookstores have turned to selling gifts as a way to diversify their revenue streams. One bookseller in San Francisco moved their inventory from being 2% gifts to 15% gifts as a way to boost sales. (Jane Friedman)

Books are not going away. Some bookstores, however, are finding it difficult to survive in a changing retail environment. Even rural consumers are beginning to perform e-commerce platforms for purchasing books instead of a trip to the local bookstore. That means fewer stores in coming years, fewer employment opportunities, and fewer gathering points for authors and writers.

The preference for books temporarily shifted to e-books. Now consumers are preferring to order actual books from online retailers.

If the bookstore industry is going to be saved, it will be because Amazon decided to save it. Their entry into the industry extends their online brand and allows consumers to potentially access their other Amazon-based services from a physical location.

Otherwise, the industry looks to be poised on the verge of collapse from a large-chain perspective. Independent booksellers continue to do well. That may very well be the future of the industry. You might see a Barnes and Noble, an Amazon, and an independent retailer competing for your business.