Alberta is one of Canada’s three so-called “Prairie Provinces.” Workers within the provinces have the highest weakly earnings of any other province, with total wages about 20% above the national average. It is a province that is rural, fueled by revenues generated by the local energy industry, but filled with opportunity.

There have been some unique global firsts experienced in Alberta. The tradition of saying “trick or treat” during Halloween is believed to have originated in the province. Beavers have built a world-record dam in Wood Buffalo National Park that is nearly a half-mile long. For added fun, 54 children in the province were named after Mortal Kombat characters in 2012.

It is a province that is unique and fiercely independent. That same personality can be seen throughout the local energy industry as well.

#1. In 2016, the province of Alberta was able to produce 3.1 million barrels per day of crude oil. That makes the industry the largest crude oil producer in Canada, accounting for 80% of the country’s total production. (National Energy Board of Canada)

#2. Almost 70% of the crude oil production the Alberta energy industry is able to achieve comes from the oil sands region in the north of the province. (National Energy Board of Canada) 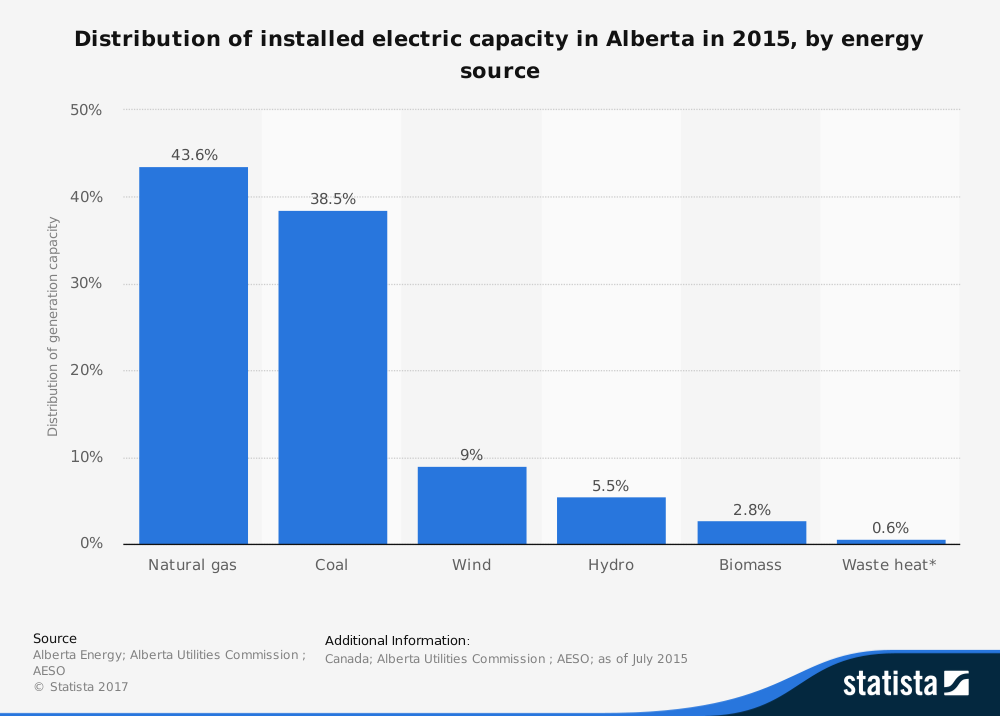 #3. There are 4 active refineries in Alberta, with a total capacity of 474,000 barrels per day, making the province the largest refining area in the country. (National Energy Board of Canada)

#5. The total reserves for natural gas within Alberta are estimated to be about 403 trillion cubic feet. (National Energy Board of Canada)

#6. Field production of natural gas liquids from the Alberta energy industry represent almost 80% of Canada’s total production in this area. (National Energy Board of Canada)

#7. More than 80 terawatt hours of electricity was generated by the industry in 2016, accounting for just over 10% of Canada’s total production. The total installed capacity of electricity generation in the province is 16,602 megawatts. (National Energy Board of Canada)

#8. Almost 90% of the electricity that is generated in Alberta is done through the consumption of fossil fuels About 47% of the power comes from coal, while another 40% is generated through natural gas. Coal-fired power plants are scheduled to be slowly eliminated from Alberta through the year 2030. (National Energy Board of Canada)

#9. The Alberta energy industry has the largest coal fleet in the country, with a total capacity with this energy resource of over 6,200 megawatts. (National Energy Board of Canada)

#10. More than 415,000 kilometers of oil and natural gas lines have been installed and are maintained by the Alberta energy industry. (Alberta Government) 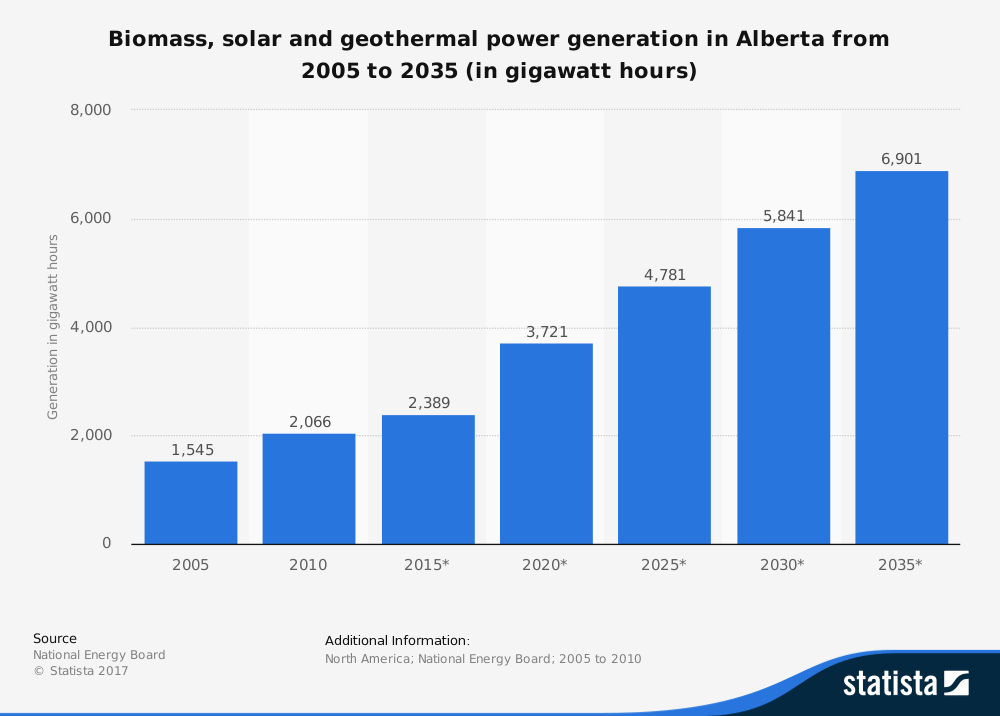 #11. In 2014, there were more than 6,300 oil and gas wells that were completed by the industry. This was fueled by investments in 2013 that totaled more than $85 billion. (Alberta Government)

#13. The total value of the industry contribution to the local economy is more than $68 billion. About 30% of this contribution is reflected in worker wages. Another $20 billion was added through construction activities by the industry. (Alberta Government)

#14. Alberta, along with Ontario and Quebec, consumed 74% of the total energy that was demanded across the country. Consumption increased in all provinces except Quebec, Manitoba, and Newfoundland and Labrador. (Statistics Canada)

#15. 81% of the provincial energy resources available in Alberta are privately owned. Revenues for oil and gas technologies or services reached a total of $33 billion in 2013. From 2003-2013, total revenues nearly tripled in size. (Alberta Government)

#16. Energy exports from Alberta totaled $3 billion in 2013, representing an increase of nearly 7% from the year before. (Alberta Government)

#17. About 78% of the crude oil that is produced within Alberta is raw bitumen from oil sands. Much of this crude oil is upgraded to a lighter version, which is then sent to domestic or international refineries for additional processing. (Alberta Government)

#18. The reserve of coal that is available to the Alberta energy industry is more than 35 billion tons. (Statistics Canada)

#19. Employment within the energy sector has declined by as much as 6% because of lower oil and energy prices within the industry. (Statistics Canada)

#20. 99% of the crude oil exports that originate from Alberta are destined to reach the United States. More than 43% of total crude oil imports and 20% of U.S. refinery crude oil come from Canada. (Statistics Canada) 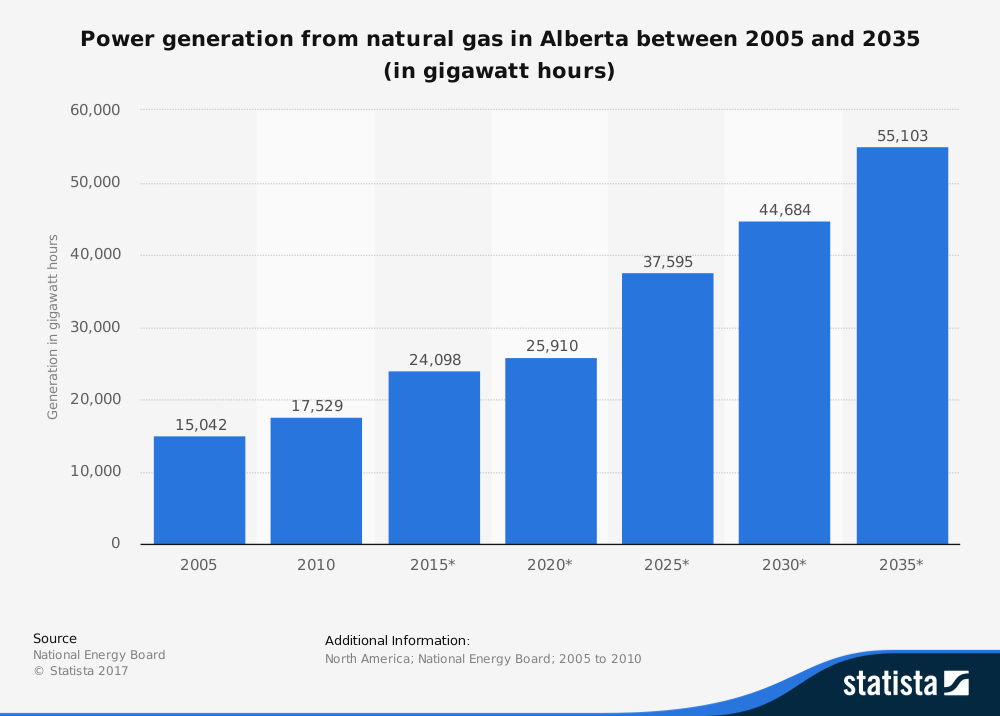 #21. 97% of the proven crude oil reserves that exist in Canada come from oil sands. More than $270 billion in capital investments have been received nationwide for development of this resource, with an average of 80% of the investments directed toward Alberta. (Statistics Canada)

#22. For in situ methods of extraction, they represent 54% of current production within the industry and account for 81% of current resources. The method is intended for use in formations that are deeper than 75 meters. (Statistics Canada)

#23. It requires about 4 barrels of new water to produce a single barrel of bitumen. Oil sands producers are able to recycle up to 80% of the water they use. (Statistics Canada)

#24. The oil industry is responsible for about 10% of Canada’s total greenhouse gas emissions. In 2014, emission levels per barrel were 31% below where they were in 1990. (Statistics Canada)

The Alberta energy industry is currently being fueled by oil sands and natural gas. Electricity is still being generated by coal. They are the largest share of resources of their type in the nation. As the efforts grow to phase out these energy resources by 2030, the transitionary period toward more renewable energies will either drive the industry to new heights or cause it to hit record lows.

Being a prairie province, there are some unique, rural challenges that must be met by the industry. Distribution networks, worker access, and affordable housing are all immediate issues which must be addressed. In Fort McMurray, where development of the oil sands has been a significant role in energy development for the industry, the rent of a 2-bedroom apartment is about $2,000 more per month than other parts of the province.