There are currently 4 supermarket chains in the UK which dominate the industry: Asda, Morrisons, Tesco, and Sansbury’s.

One of the fastest growing segments of the UK supermarket industry is, in fact, discount supermarkets. All 4 leading chains have lost market shares to discount stores since 2016.

To counter this issue, the four chains have lowered prices on some popular products. The discount supermarkets did the same, creating a price war between the two segments. This has resulted in the UK supermarket industry to have the largest volume of food sales on promotion in Europe.

#1. The total grocery retail market value in the United Kingdom is more than GBP 179 billion annually. The value of retail sales in stores that sell predominantly food total GBP 160.5 billion each year. (Statista) 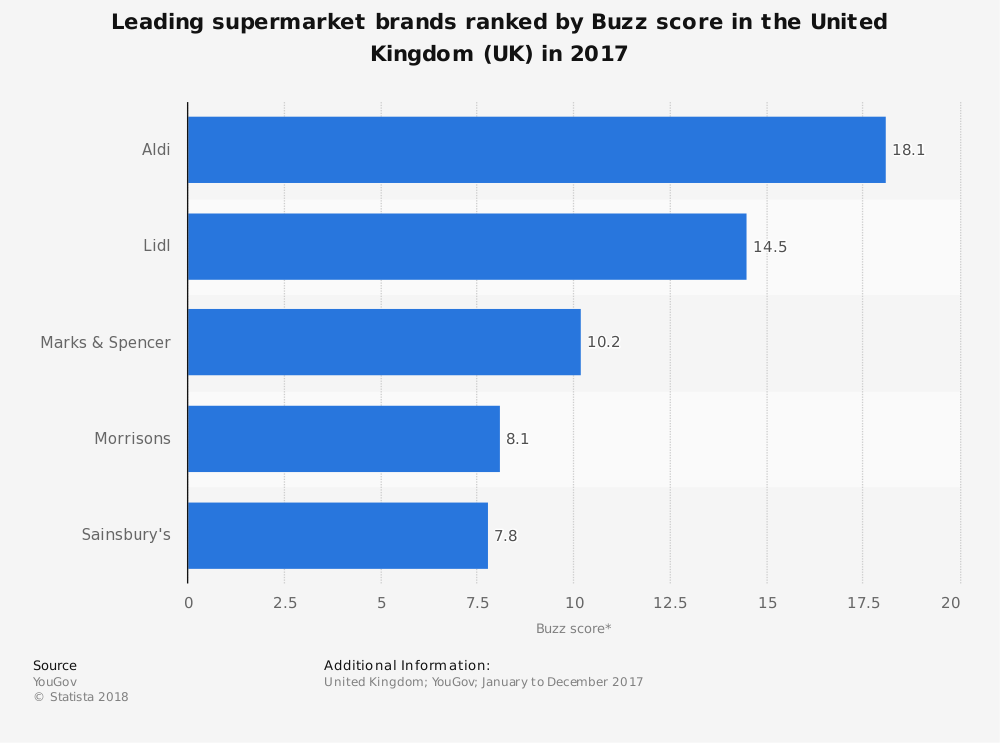 #3. 22% of shoppers in the UK say that they visit their local convenience store at least once per day. Most leading supermarket chains operate their own local stores. (Statista)

#4. The volume of sales in predominantly food stores within the UK supermarket industry has risen by 3.7%. During the same period, the percentage change in the value of sales has risen 1.7%. (Statista)

#6. Although the OFT prevented Tesco from purchasing Safeway in 2002, the brand was allowed to purchase 1,200 convenience stores. By 2015, Tesco had acquired around 2,000 convenience stores. It has also recently purchased Booker, a wholesale grocer, for GBP 3.7 billion. (Economics Online)

#7. Over the past decade, the number of independent retailers within the UK supermarket industry has fallen from 35,000 firms to 18,500 firms. (Economics Online)

#8. Over 60% of food and drink exports that originated from the UK supermarket industry were shipped to the European Union. The total value of the exports market in 2016 was GBP 304.4 billion. (IGD)

#9. The UK supermarket industry is the largest private-sector employer in the country. About 3.9 million people are directly employed in various sectors, from farming to retailing to catering. In total, 14% of all employment in the UK is created by this industry. (IGD)

#10. Food and drink manufacturing within the UK has a total value of GBP 96 billion. It accounts for 19% of the total manufacturing that occurs in the United Kingdom. (IGD) 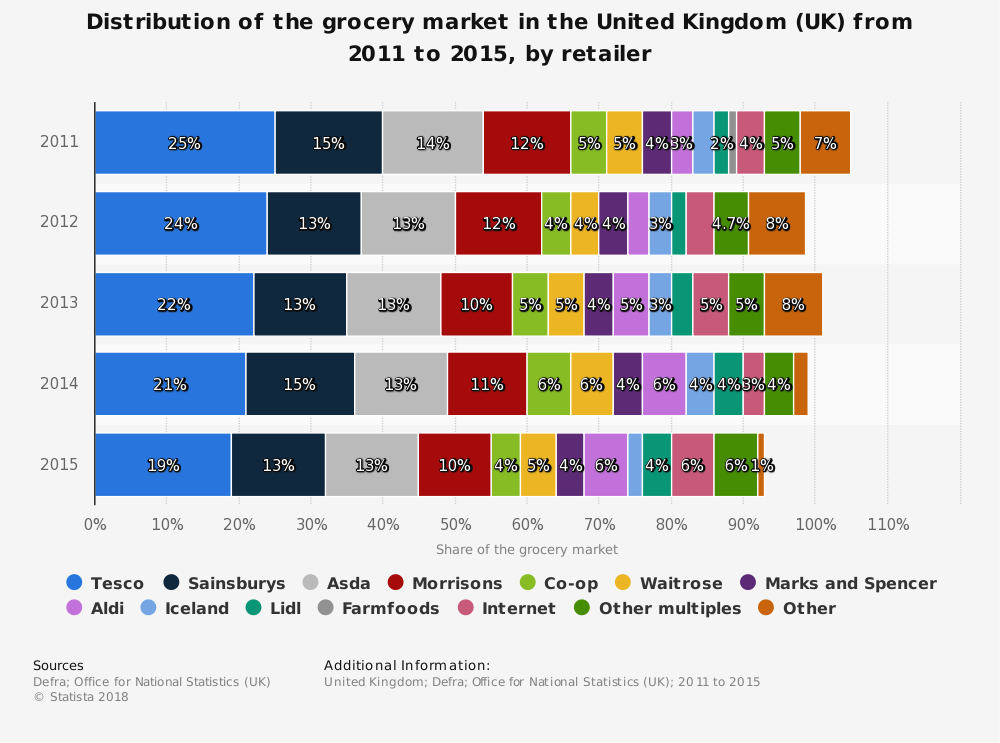 #11. The UK supermarket industry has even broken into the food-to-go market, which was worth GBP 16.1 billion in 2016. The supermarket share of this segment was GBP 1.2 billion. Convenience stores added another GBP 2.5 billion in revenues. (IGD)

#12. 17% of consumers in the UK are purchasing breakfast at least twice per week at on-the-go locations. (IGD)

#13. Nearly 70% of consumers say that they have purchased at least one drink on-the-go in the last week. (IGD)

#14. Half of all shoppers in the UK buy lunch on-the-go at least once per week. Another 25% will purchase snacks twice per week. (IGD)

#16. The UK agriculture industry provides more than 60% of the food which is consumed in the country each year. Fishing and agriculture, on their own, contribute more than GBP 10.7 billion each year. (IGD)

#17. Sales of Fairtrade products in the United Kingdom totaled GBP 1.6 billion in 2015. More than 400 companies are currently licensed to use the Fairtrade mark on their products. (IGD)

#18. Fairtrade banana sales in the UK increased by 5%, in volume, for 2015. That generated about GBP 8.2 million in premiums for workers and farmers from a total of GBP 29 million in sales from the UK supermarket industry. (IGD)

#19. In 2017, inflation rates added an estimated GBP 133 to the average household’s monthly grocery bill in the United Kingdom. (The Telegraph)

#20. In Q2 2017, grocery sales within the industry grew at a rate of 5%. That was the fastest rate of growth the industry had experienced since March 2012. (The Telegraph) 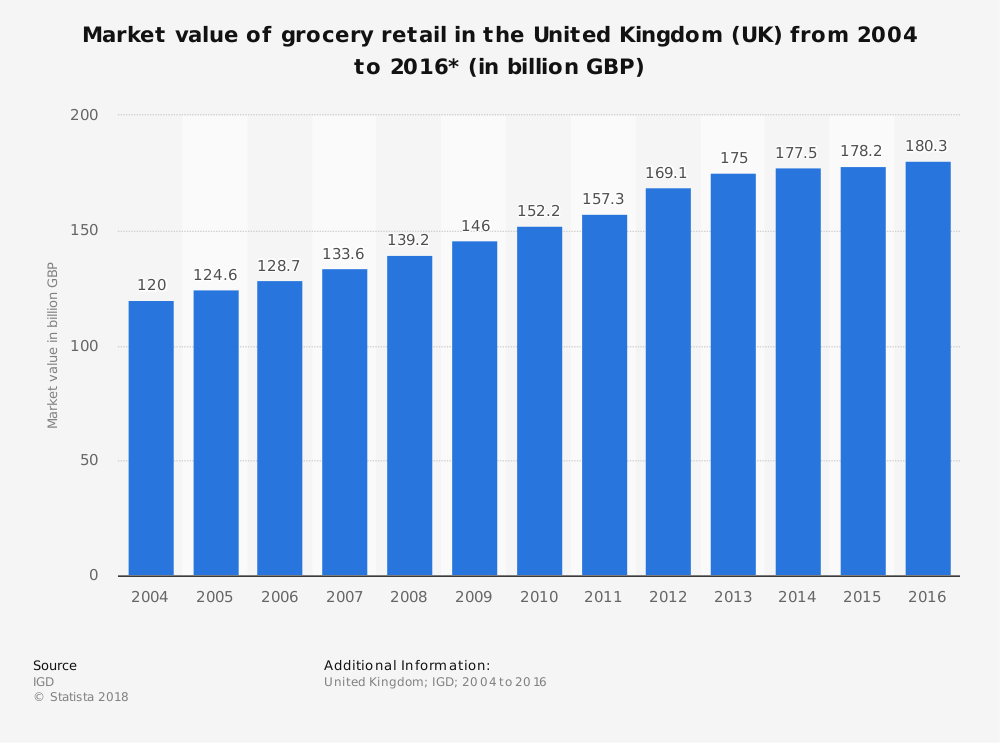 #21. Morrisons has recorded the strongest sales increases within the industry, with performance at 3.7% Tesco saw their sales grow by 3.5% in June 2017, which was their fastest rate in 5 years. Asda had the lowest sales increased of the Top 4, at just 2.2%. (The Telegraph)

#22. Inflation has affected some products much more intensely than others within the industry. Butter, for example, was about 20% higher in 2017 compared to the year before. Tinned fish and fresh fish prices were up 14%. Cider and ice cream prices were up 16% and 12% respectively as well. (The Telegraph)

The UK supermarket is attempting to consolidate as a way to protect itself from the influence of discount grocers. In the last year reported, Aldi is the most popular discount grocer, achieving GBP 1.8 billion in revenues. Although that is still about GBP 1 billion lower than the least popular “Top 4” chain, the gaps on the monopsony are beginning to close.

Since 2011, the concentration ratio of the 4 largest brands within the UK supermarket industry has fallen from 75% to 72.3%.

Because of that trend, watch for the major brands to take advantage of their local convenience stores. By stocking their c-stores with needed daily products, perhaps at a small discount compared to other locations, these brands will be able to continue encouraging traffic to come through their doors.