One of the most popular seafood options found in the United States is tilapia. The fish has become quite popular because it has a reasonably good flavor profile while being one of the most affordable fish protein options for consumers.

In 2014, the tilapia became the fourth-most consumed seafood product in the United States, according to reporting from Fox News. It came behind shrimp, salmon, and canned tuna. Because tilapia is such an easy fish to farm, it becomes very affordable within the overall seafood market. It is a hearty variety, adaptable to different types of feed, and that makes it very easy to find.

The culture of Nile tilapia can be traced back to Egyptian times, with more than 4,000 years of possible human consumption. It wouldn’t be until the 1950s, however, when global distribution of this fish began to grow. Farms were introduced in Thailand in 1965, which then spread to the rest of Southeast Asia, parts of Africa, and South America over the next 20 years.

#1. China is the global leader in tilapia production. From 1992-2003, they produced more than half of the tilapia that was consumed around the world. (FAO – United Nations)

#2. During the first 9 months of 2017, the global tilapia market contracted by about 6%. Total Chinese exports of frozen tilapia continued to grow, however, at a rate of 4.4%. (FAO – United Nations) 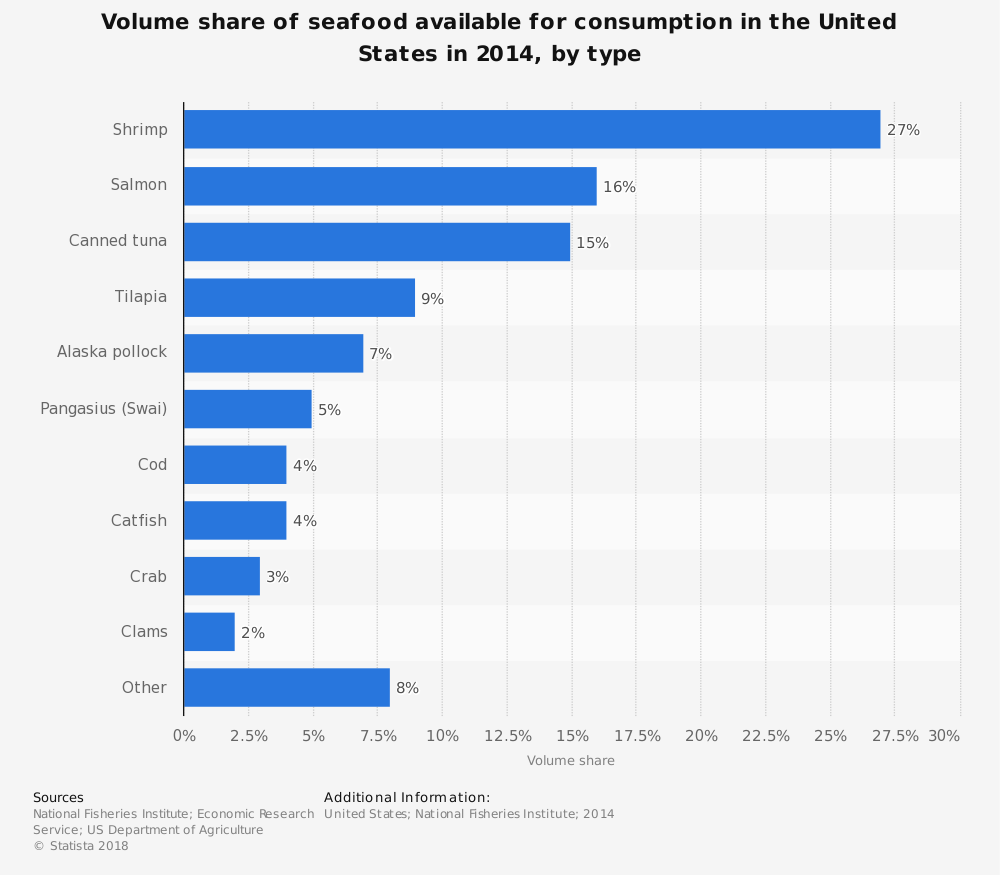 #3. Frozen breaded fillets have experienced the highest levels of growth in the past year, with demand rising at 19.3%. Whole frozen tilapia products have risen in demand globally by 3%. Frozen fillets, however, declined by 5.3%. (FAO – United Nations)

#4. Total imports of frozen tilapia fell by 13% during the first 9 months of 2017 in the United States. Imports dropped specifically in the frozen fillet and whole frozen segments. (FAO – United Nations)

#6. Honduras is the primary supplier of fresh or chilled tilapia fillets to the market in the United States. They hold one-third of the current market share, even though a 14.5% contraction in value and an 8.9% drop in value occurred in 2017. (FAO – United Nations)

#7. After the U.S., the Latin America market is the largest importer of tilapia in the world, with about 58,000 tons imported each year. Africa imports about 32,000 tons annually, a volume that has doubled since 2015. (FAO – United Nations)

#8. In the United States, less than 5% of the tilapia which is consumed is produced domestically. More than 75% of domestic production in the U.S. comes through recirculating systems. (Monterey Bay Aquarium)

#9. Only 8 drugs are fully approved for use in U.S.-based aquaculture and they are mostly used to prevent or treat diseases. Chemicals, such as methyltestosterone, which is used internationally for sex reversal, is only available with a special permit for closed-system hatcheries. (Monterey Bay Aquarium)

#10. There are just 28 hatcheries in the United States that focus on tilapia production and they supply the entire domestic stock of this fish. (Monterey Bay Aquarium) 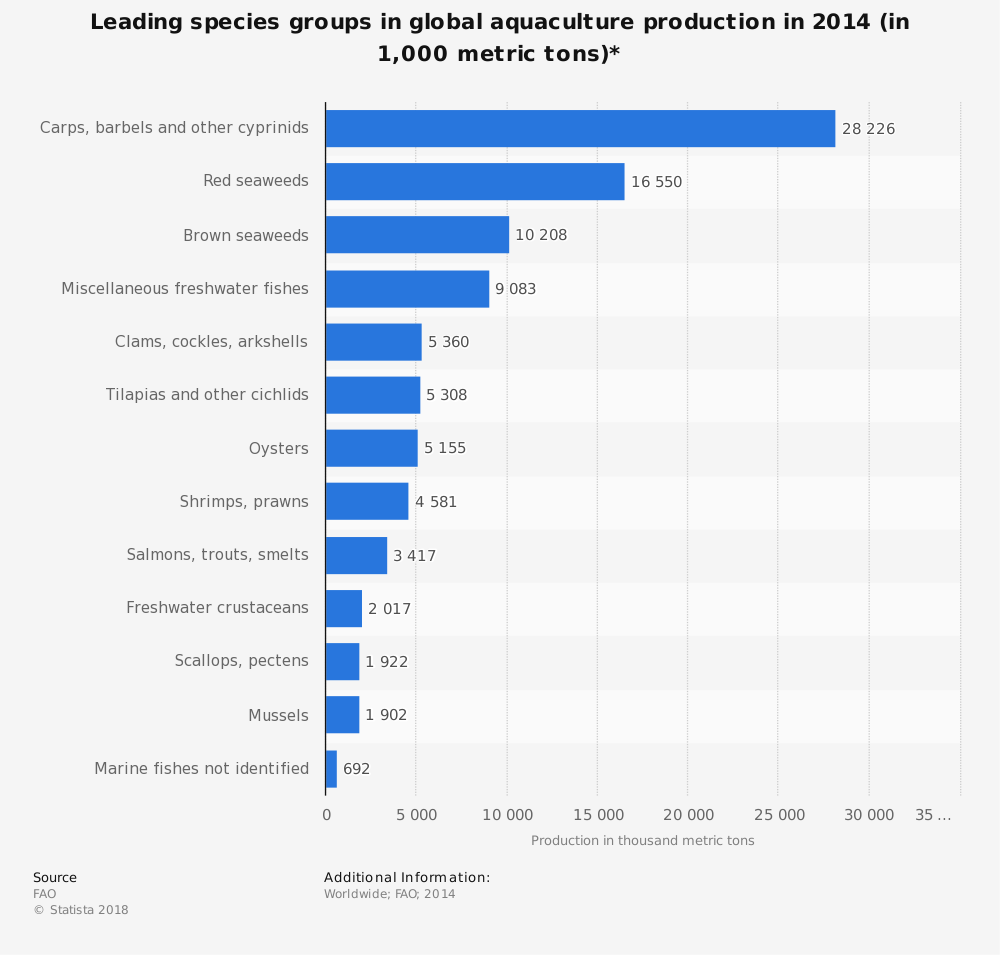 #11. More than 259,000 metric tons of tilapia was produced in the Philippines in 2016 through aquaculture efforts. Of that figure, just 900 metric tons of the tilapia were designated for the export market. These figures have been stable for the past 5 years. (Seafood Trade Intelligence Portal)

#12. About 54,000 metric tons of tilapia is landed from rivers and lakes throughout the Philippines as well. This is because the Bureau of Fishery and Aquaculture Resources in the Philippines has released fingerlings in local waterways for artisanal fishing for the past decade. (Seafood Trade Intelligence Portal)

#13. About 56% of the exports that come from the 1.8 million metric tons supply in China are destined for the United States. Mexico receives 10% of Chinese exports, while Russia and the European Union receive 6% each respectively. (Research Gate)

#14. In the U.S. market, tilapia sales account for about 25% of all fin fish dollar shares in each category. The average store that sells seafood in the United States averages $608 in weekly sales. (Research Gate)

#16. Tilapia imports to the United States in 2014 were valued at more than $1.11 billion. In comparison, tilapia farm-gate sales in the U.S. were about $90 million. (Research Gate)

#17. In Mexico, just over 50% of the aquaculture licenses that are granted license tilapia farms. In 2013, the tilapia industry in Mexico was able to generate about $103 million in total sales. (Research Gate)

#18. Since 1992, only the prices of fresh tilapia fillets have seen a dramatic increase in pricing per kilogram. Every other category has remained relatively consistent. In 1992, fresh fillets were valued at $5/kg. In 2014, they were valued at more than $7/kg. (Research Gate)

#19. The United States imports about 96% of the global supply to the international market, though Taiwan and the U.S. are the only nations that traditionally record tilapia as a separate trade statistic. (FAO – United Nations)

#20. Tilapia, as a species, accounts for 7.6% of freshwater production in aquaculture systems. (National Institutes of Health)

#21. All-male production for tilapia is preferred by the industry, as male fish grow 40% faster than female fish. That is why the international industry focuses on sex reversal processes, something which is not as prevalent in the United States aquaculture market. (National Institutes of Health)

#23. By 2020, the overall tilapia industry is expected to reach a market value of more than $10 billion. (Research Gate)

What has limited the tilapia industry from further explosive growth in the past 5 years are reports about the overall nutritional profile of the fish. Tilapia has been found to have high levels of arachidonic acid, which is an omega-6 fatty acid. It is a necessary component of the human diet, but when consumed in high levels, it has been linked to certain brain disorders, such as Alzheimer’s disease.

It also contains fewer omega-3s than other popular seafood options that are found in the America diet. The combination creates an inflammation profile that is worse than a cheeseburger with bacon for some consumer.

At the same time, however, tilapia does contain more omega-3 than lobster or certain types of tuna. It also contains very low levels of saturated fat and a 100g serving contains 29g of protein.