Their forecast called for publishers to shift toward more of a digital format for their textbooks. With open-license textbooks, digital competition, and other disruptors in the field, it seemed like the textbook industry was in a lot of trouble.

Although the industry has seen declines in its sales since 2007, the results have been far from dire.

#1. The average annual spending for students on textbooks for their classes decreased by 17% between 2007-2017, dropping from $701 per year to $579 per year. (National Association of College Stores)

#2. Students purchase an average of 10 textbooks over an academic year for their classes, with 74% of students saying that bought new books and 70% saying they purchased used textbooks. (National Association of College Stores) 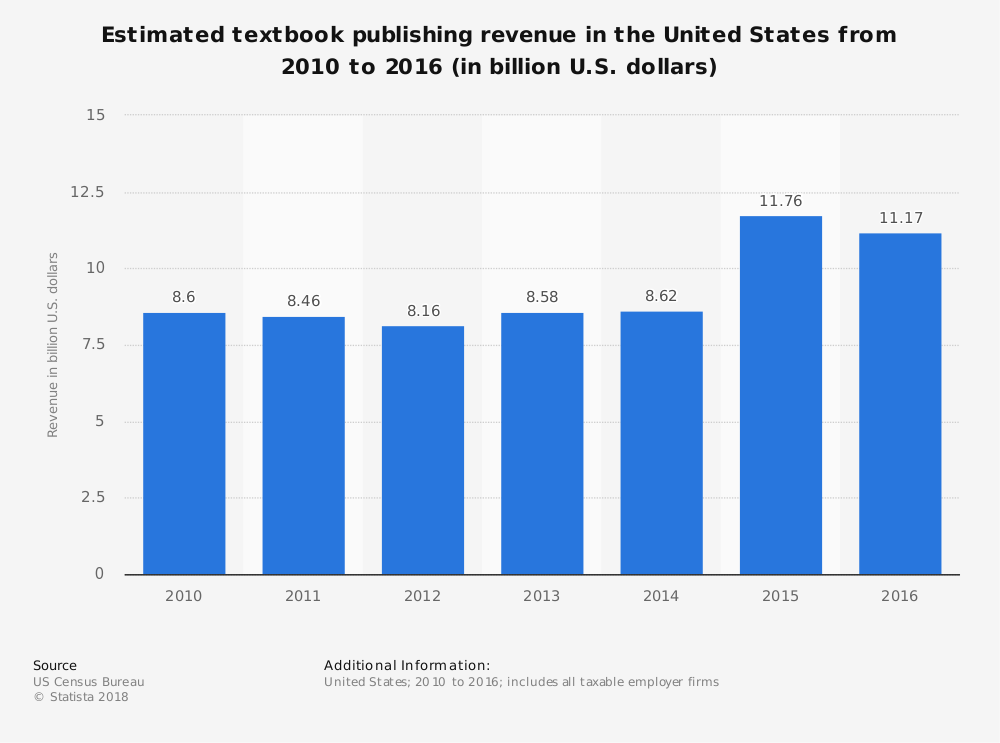 #3. 23% of students enrolled in classes within the U.S. and Canada say that they’ve purchased at least one digital textbook in the past academic year. (National Association of College Stores)

#6. Campus stores are still the most popular location for purchasing a textbook, with 82% of students saying that they bought at least one book there. 40% of students say that they purchased textbooks and course materials from Amazon. This is followed by purchasing a textbook from another student (8%), a publisher website (7%), or Chegg (7%). (National Association of College Stores)

#7. There are an estimated 5,000 stores which serve the collegiate retail market in the United States, generating an average annual sales figure of $2.3 million per store. (National Association of College Stores)

#8. Since the 2010-2011 academic year, the average number of enrollments in the United States has been steadily decreasing, from 21 million students to 20.2 million students. At the same time, the average store sales estimate has been above $10 billion. (National Association of College Stores) 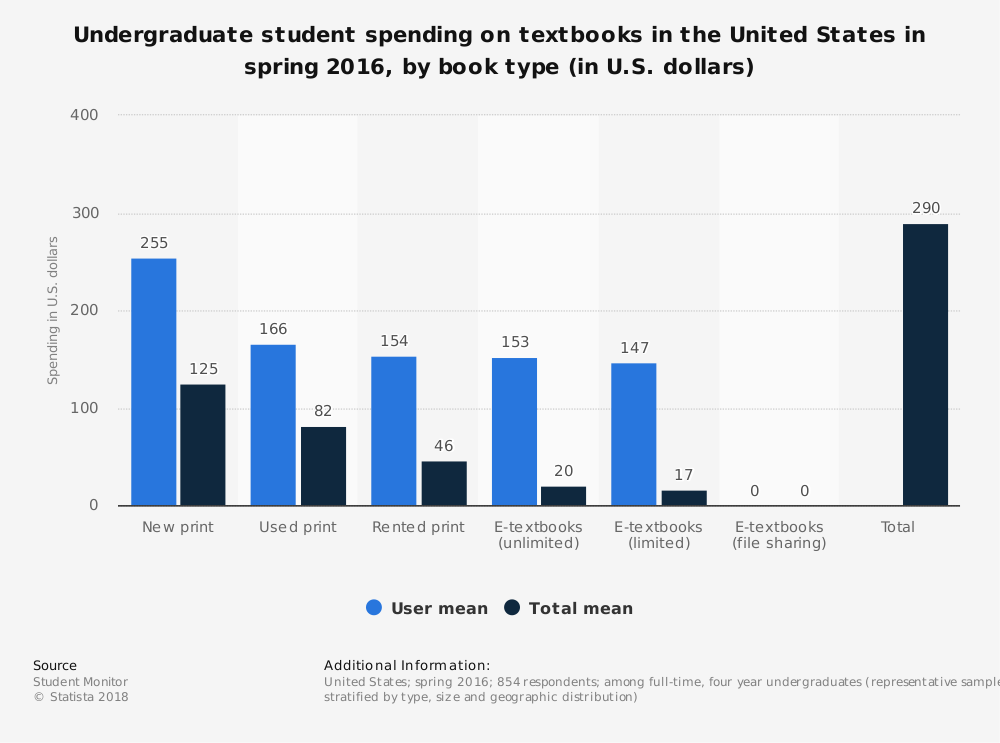 #14. Students have maintained a 5% preference for e-book versions of the textbooks which are required for their classes from 2012-2018. (McKinsey)

#15. Dropout rates in first-year engineering and mechanics courses at the University of New South Wales fell from 31% to 14% after adaptive digital tutorials were introduced as part of the curriculum. (McKinsey)

#16. 68% of faculty in schools require a textbook for their classes. 89% of current teachers have either changed their required textbooks, modified their learning requirements, or created a new course over the past 2 years. (Lead Winds)

#17. 16.5% of the faculty which teach large enrollment classes use OpenStax textbooks, which have an average cost of $31. (Lead Winds)

#18. 80% of the current textbook industry is controlled by just 5 publishers. In 2016, Pearson reported a loss of more than $3 billion within their textbook publishing section. (Lead Winds)

#19. 69% of spending on textbooks within the industry goes toward the cost of printed materials. (Lead Winds) 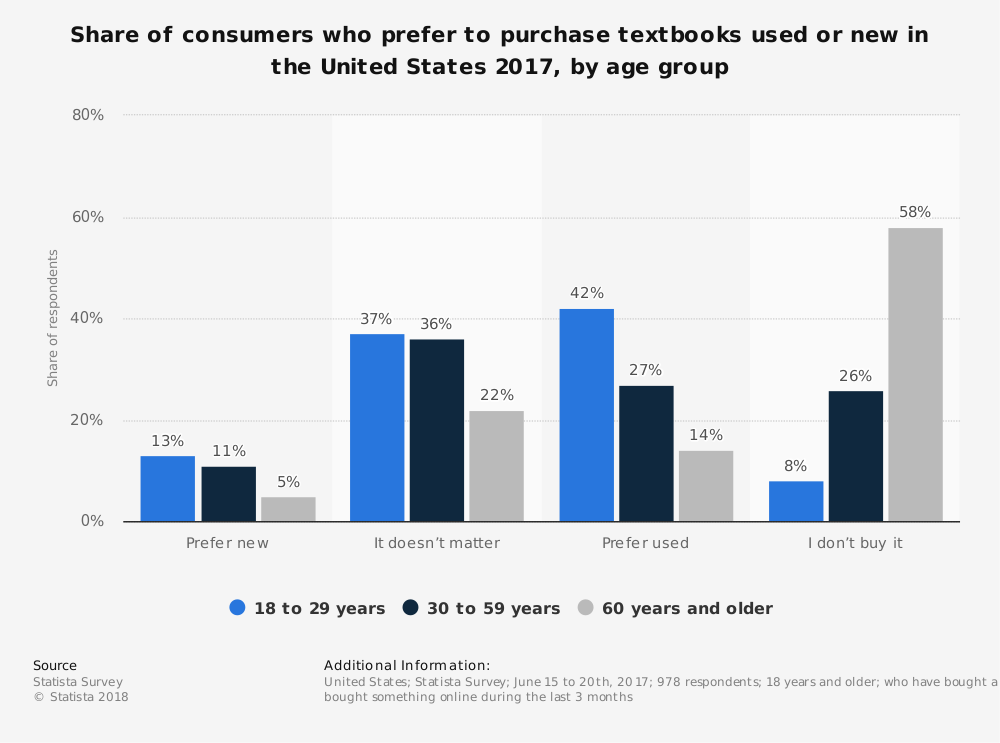 #21. New textbooks that are purchased by students today will depreciate by 40% after just one semester. After two semesters, the depreciation rate for the textbook rises to 60%. (Lead Winds)

#22. Inclusive Access is a program which allows for cheaper downloads of textbooks and opt-out options if a class is dropped. During its first year of operation, the program saved $1 million with just 3,000 students enrolled. Books that would retail for up to $400 were available for $1000 in the program. (Forbes)

#23. OpenStax books are currently available at 2,000 institutions of higher learning within the United States today. (Forbes)

There are certainly future challenges which must be faced by the textbook industry in the coming years. To offset revenue losses, there has been an increase in the price of each unit sold. That will not sustain the industry for long. Students will look more toward renting or borrowing options to avoid the higher costs.

What McKinsey suggested in 2014 holds more relevance today, arguably, then it did back then. If textbook publishers can shift more of their product to the e-book format and offer students access to cheaper downloads, the industry may be able to stay competitive with disruptors in this area which are already providing similar services.

Going to school requires access to learning materials on some level. Every grade level will benefit from the presence of textbooks. If the industry is able to evolve along with the educational opportunities that are being offered, the future could be surprisingly bright for textbook publishers in the future.