The U.S. might be the global leader in soybean production, providing more than 100 million tons of soya products to the market each year, but it is China which started the cultivation of this legume. Evidence shows that soybeans were first cultivated more than 6,000 years ago, which would make it one of the world’s first domesticated crops.

Soya is popular because of its nutritional content profile. It contains twice as much protein as pork, triple the protein of eggs, and 12 times the protein found in milk. When consumed dry, it contains about 18% unsaturated fat.

#1. In 2016, there were 83.7 million acres of planted acreage which involved soybean crops. This created a cash value for the crops of $38 billion in the U.S. market. (U.S. Department of Agriculture) 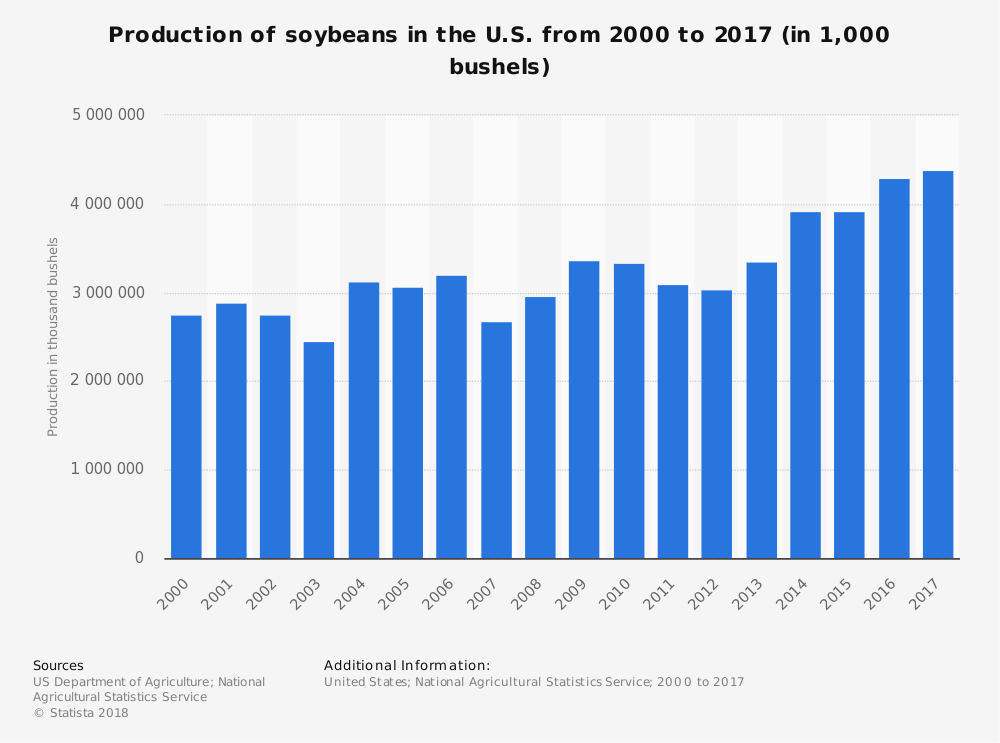 #4. In 2016, almost 2 billion bushels of soybeans were exported from the U.S.-based soya industry. That is more than 600 million bushels above the export figures achieved from the 2012 crop year. (U.S. Department of Agriculture)

#5. In total, about 47% of the soya products grown in the United States are destined for exports, just below the industry average in the last decade of 48%. (U.S. Department of Agriculture)

#6. China receives the greatest share of soybean products from the United States, averaging more than 1 billion bushels annually. The European Union and Mexico both receive more than 100 million bushels of soya each year as well. (U.S. Department of Agriculture)

#8. The United States is the largest producer of soya products in the world today. Brazil is the world’s second-leading producer, accounting for a total production volume that averages 96.5 million tons each year. (Statista)

#9. Alternative soy food products have become a growing segment of the soya industry since 2010. The number of consumers who say they consume soy-based products has risen by 13 percentage points since 2016. (Statista) 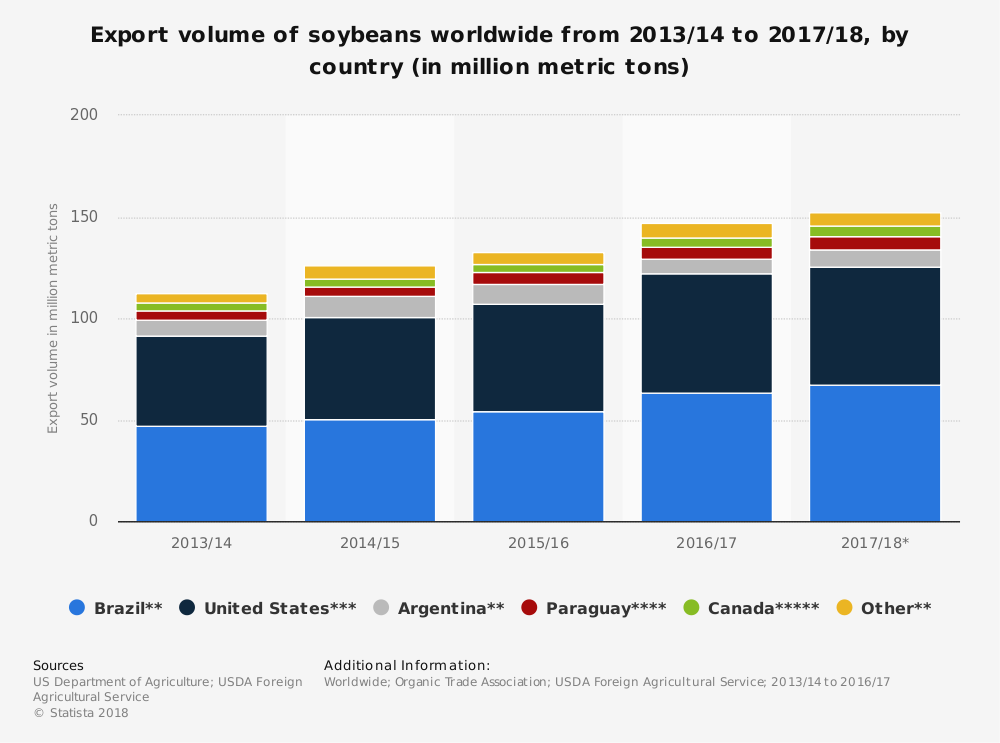 #11. About 14% of U.S. adults say that they are trying to consume more soya as a primary protein source in their diet. (Statista)

#12. Since 1961, global soybean production has expanded by nearly 10 times. Since the mid-1990s, the industry has already doubled in volume. (World Wildlife Foundation)

#13. When combined with Argentina and China, the U.S. and Brazil help to contribute about 85% of the world’s soya industry each year. (World Wildlife Foundation)

#14. About 85% of the soybeans that are produced each year by the industry are crushed to make soya meal products or soybean oil. (World Wildlife Foundation)

#15. About 75% of soya consumption comes through animal feed instead of products that enter directly into human food components. (World Wildlife Foundation)

#16. China is the largest importer of soybean products in the world today, dominating the export market with a 61% market share. (World Wildlife Foundation)

#18. The retail soy food industry in the United States achieved $4.5 billion in revenues in 2013. In the 1990s, the industry was averaging about $1 billion in sales annually. (Soyfoods Association of North America)

#19. The plant-based foods sector in the United States created $3.5 billion in sales alone, growing at a rate of 8.7% from 2011-2013. In comparison, the overall food and beverage industry grew at a 3.7% rate within the same time period. (Soyfoods Association of North America)

#20. Soya food bars lead the retail foods segment of the industry, accounting for $1.6 billion in total sales. This segment has experienced a 17% CAGR since 2011. (Soyfoods Association of North America) 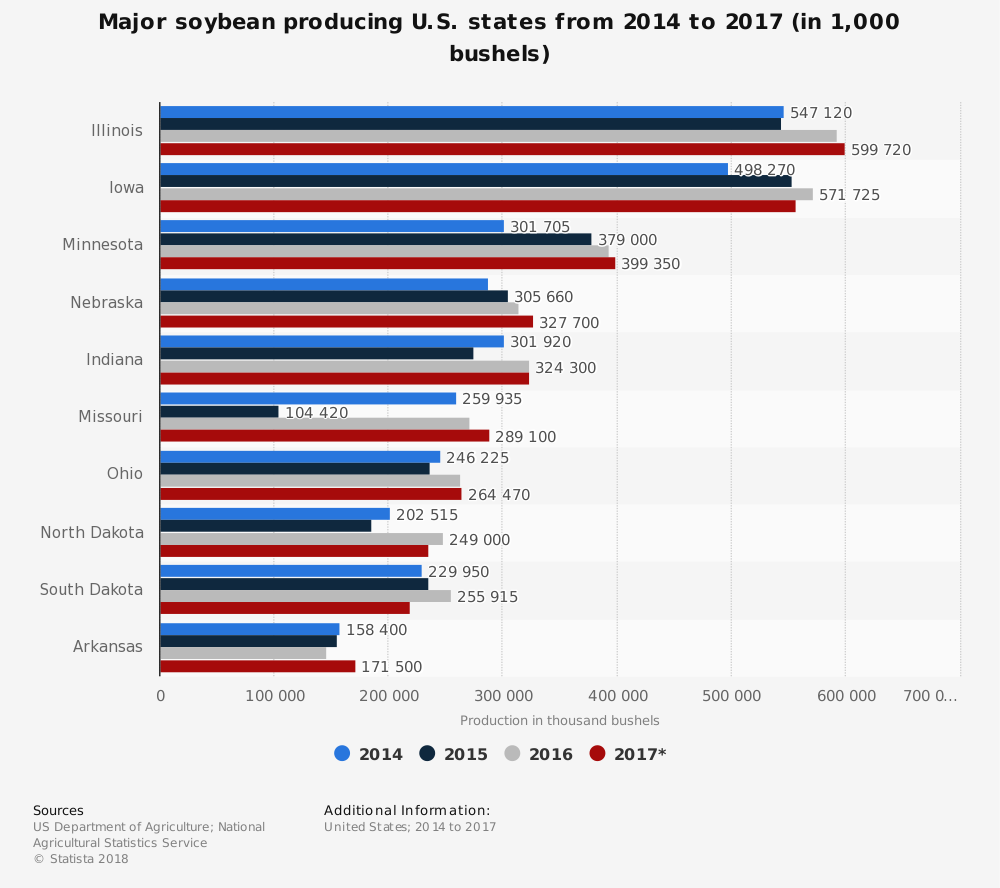 #21. Tofu sales in the United States totaled $274 million in 2013, with the strongest growth seen by the industry segment in Asian market sales. (Soyfoods Association of North America)

#22. Soy sauce continues to be a strong driver of sales for the condiment segment of the industry, accounting for $292 million in sales in 2012, the last year figures have been published. (Soyfoods Association of North America)

#23. 31% of Americans say that they consume soya products at least once per week. (Soyfoods Association of North America)

By 2050, the soybean industry is expected to achieve explosive growth. Global production levels are expected to reach 514 million tons. That would be nearly double what the industry was able to produce in 2012. As an increase in food production is expected, along with a higher demand for biofuels, the soya industry will continue to produce a viable and popular product.

What we will see in the upcoming years is an evolution of the trend to produce soybeans outside of the United States. New cropland development in Brazil, as well as most of South America, will help to meet the growing demand levels. In the next 10 years, Brazil may very well take over the top production spot for the global market.

Most of the growth the industry will be able to achieve is expected to come from Asia. Exports to the region are expected to triple by the end of the next 5-year period, achieving totals above 200 million metric tons for the first time.