Starting in 1991, the residential in-ground swimming pool market in the United States began a run of 14 consecutive years of growth. At the end of that push, the number of new pool installation rose from 97,000 per year to 176,000 per year. About 40% of the pools currently used in the U.S. were constructed during that period.

That good run of business stopped in 2006. By 2009, the industry experienced a 70% loss in total inventory, reaching just 54,000 pools installed. Those numbers are similar to the losses suffered in the housing industry (74%). Since 60% of new pools are tied to new construction opportunities, the two markets are deeply connected to one another.

Some consumers shifted to spas and hot tubs to avoid the cost of an in-ground pool. There are about 5.8 million hot tubs owned in the United States, representing about 5% of total households and 2% of individuals in the country. As with pools, the interest in hot tubs and spas declined after 2006, dipping below 50% levels from 2010 to 2017.

With the economy finally making a surge of recovery for the Middle Class in 2018, could the pool and spa industry be poised for a rebound?

#1. Since the end of the recession years in 2009, the growth of the in-ground pool industry has been 13%. Construction figures have still not returned to levels seen in 1991. The last time the industry was at the current level of construction (61,000 pools per year) was 1982. (Aqua Magazine) 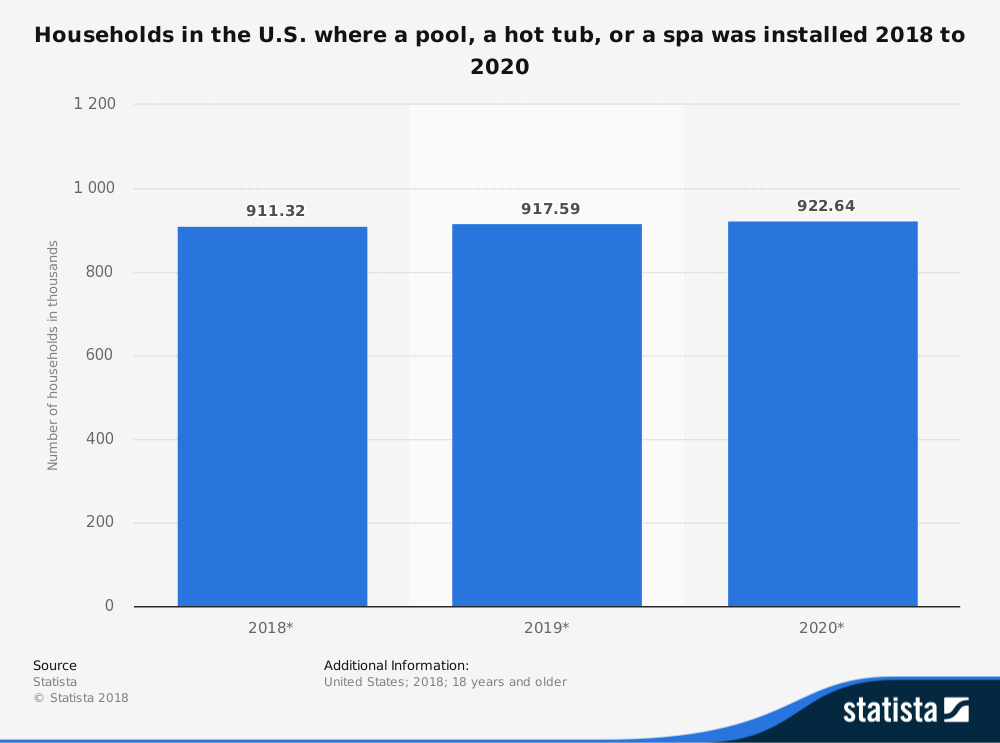 #3. 46% of customers shopping for pools or spas in the United States are concerned about the price the most. That’s followed by curb appeal (16), hydrotherapy options (7%), and LED lights (7%). (Aqua Magazine)

#4. 76% of pool and spa retailers sell portable spas, with two out of three saying that their sales increased in 2016. That was an 8% increase over figures reported from the year before. (Aqua Magazine)

#5. 20% of industry retailers said that their sales remained the same in the past year with portable spas because of big-box competition and Internet sales. (Aqua Magazine)

#6. For the 13% of retailers who said that their sales decreased over the past 12 months, staffing issues were blamed as the primary reason. (Aqua Magazine)

#8. There are about 10.4 million residential swimming pools currently used in the United States. Communities have invested in an additional 309,000 public swimming pools for use as well. California has the most pools, with an estimated 1.1 million currently used. (The Spruce)

#9. About 7.3 million hot tubs are currently operating in the United States right now. (The Spruce)

#10. There have been at least 80 recreational water-associated outbreaks of disease transmission in the United States, affecting over 1,300 people because of their use of pools or spas. (CDC) 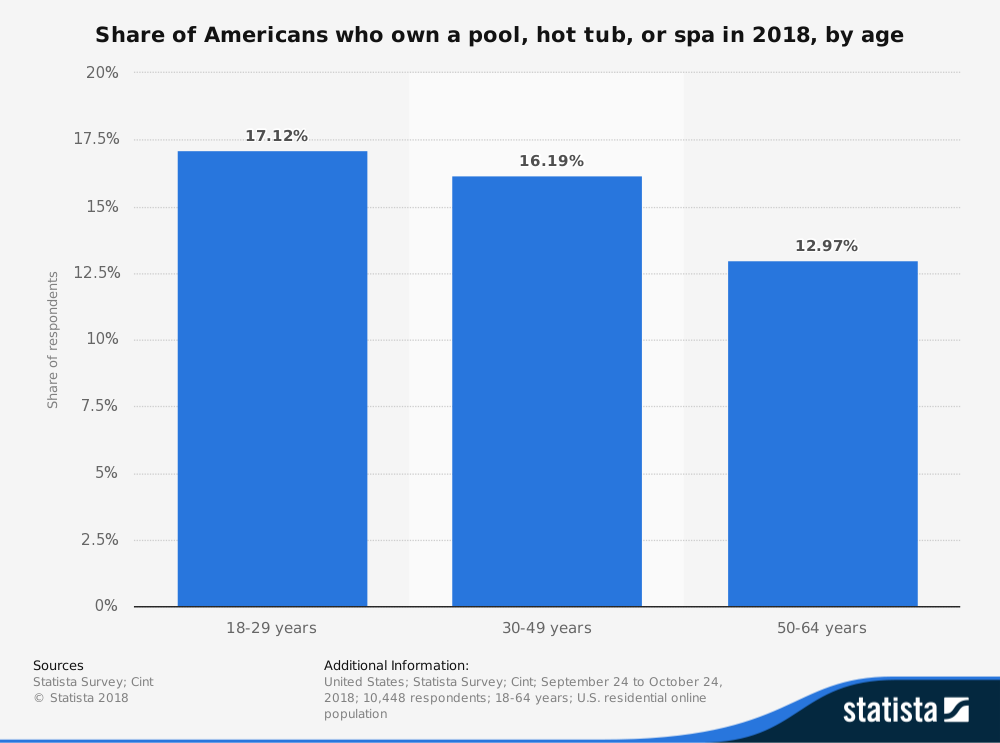 #11. About 4,600 people each year are admitted to hospital emergency rooms because of chemical-associated injuries from their use of a pool or spa. The most common injuries treated included poisoning, vapor exposure, and dermatitis. 50% of these injuries occur during residential use of an industry product. (The Spruce)

#12. 36% of kids between the ages of 7 to 17 report that they go swimming at least six times per year. 15% of adults fall into this category of frequency as well. (U.S. Census Bureau)

#13. Over 10% of the routine pool inspections which occur annually in the United States discover a disinfectant level violation. (CDC)

#14. 56% of the spas used in the United States are in violation of local environmental health regulations. After inspection, 11% of spas are closed immediately because of their potential for harm. (CDC)

#15. Drowning is the leading cause of unintentional death in the world today, with over 370,000 global incidents reported each year. About 3,500 people die from drowning in the U.S. each year. (CDC)

#16. For children between the ages of 1 to 4, drowning is the primary cause of unintentional death in the United States. About 390 children each year drown while using pools and spas. (CDC)

#17. 47% of the swimming pools currently used in the United States are above-ground pools. (Swim University)

#18. 85% of swimming pools in the United States use chlorine to sanitize the water. Another 12% are saltwater pools. (Swim University)

#19. 35% of people jump into a swimming pool without showering first, while another 17% of people (including adults) admitting that they urinate in the pool while they swim. (Swim University) 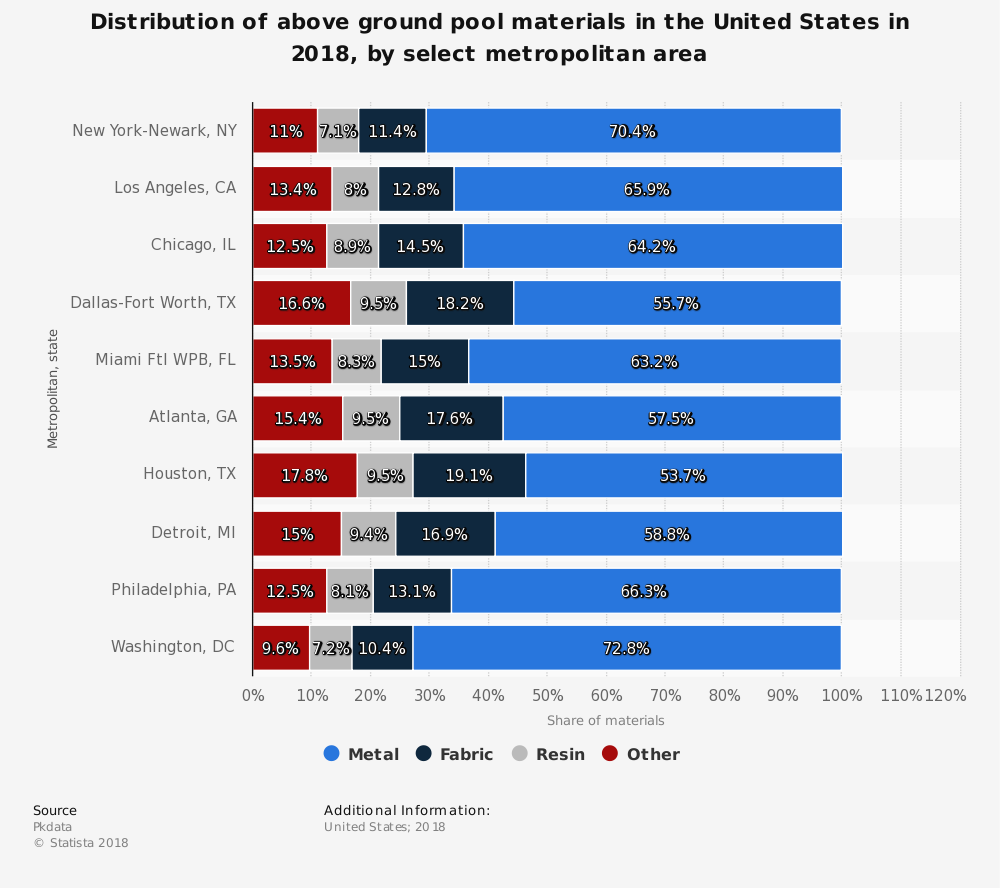 #21. The monthly cost for pool chemicals to maintain appropriate clean water levels for residential poos is $87.50. About $1 million per hour is spent on swimming pool construction, maintenance, or cleaning in the United States. (Swim University)

#22. 38% of the in-ground swimming pools in the U.S. have at least one diving board. (Swim University)

#23. Metal materials are used most often in the construction of above-ground pools in metropolitan areas. Over 64% of these pools in Chicago are constructed from metals. (Statista)

The pool and spa industry currently faces several challenges that must be met in the next five years for it to continue its recent growth trends. Only 8% of people in a recent H2Insider survey said they were “very interested” in owning a spa. Another 19% of respondents said that they were “somewhat interested” in the industry.

Those figures are a close match to the current ownership numbers of pools and spas in the United States right now. That indicates the unmet demand levels for the industry are very low.

To stimulate growth, the industry must find ways to supplement demand within its current ownership demographics while creating more interest in their future customer segments by offering innovative and affordable products.

The current average cost to install an in-ground swimming pool that is 32 feet by 16 feet in size is almost $22,000. Even a 19-foot diameter above-ground pool retails for more than $6,200.

With spas priced at the same point as the above-ground swimming pools, those who are most concerned with price will likely stay away from the industry. Only when the economy can maintain its levels of strength will more customers begin to approach the idea of pool or spa ownership once again.