#3. Thailand, Indonesia, India, Nigeria, and China all produce more than 1 million metric tons of pineapple for the industry every year. (Statista)

#4. Pineapples represent about 20% of the global production of tropical fruit in the world today. In the last 50 years, global pineapple production levels have risen by over 400%. (Novagrim)

#6. Since 1980, the total amount of land use in Hawaii for agricultural production, including pineapple, has been reduced by 68%. More than 100 positions within the Hawaii Agriculture Department remain vacant. (Washington Post)

#8. Once planted, it can take more than 2 years for a new pineapple plant to produce its first fruit. (Love Big Island)

#9. Pineapples are the 11th most common cultivated fruit in the world today. In 2013, about 24.8 million tons were produced globally. (FAO) 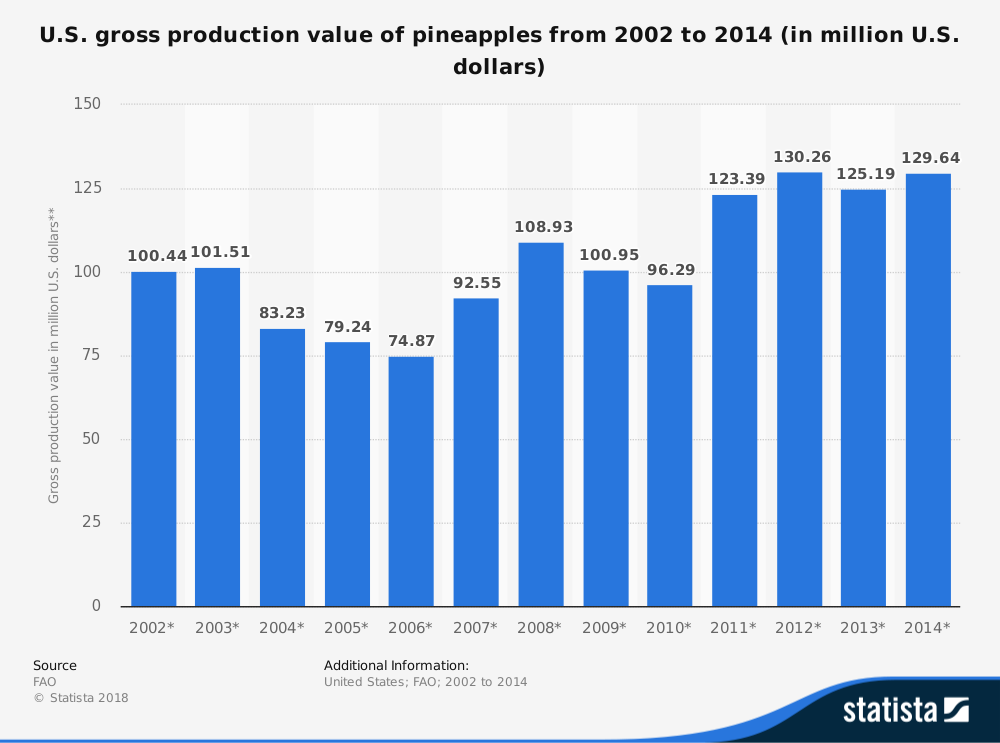 #11. Costa Rica is the top exporter of pineapples, with almost all of the harvest being sent to the export market each year. In the Philippines, just 20% of the production is dedicated to the fresh consumption market. The rest is used for processing purposes. (UNCTAD)

#13. About 13% of the total pineapple production levels that are achieved globally each year are dedicated to the export market. (UNCTAD)

#15. The United States and the European Union import as many pineapples in a month as Japan consumes over the course of an entire year, according to published monthly import figures from 2014. (UNCTAD)

#17. Americans, Canadians, and Europeans consume an average of 2 kilograms of pineapple products per year. (UNCTAD)

#18. The processed pineapple market is specifically concentrated on the United States and Europe. About 40% of all wholesale pineapple products that are available for import involve canned fruit. Just one-third of the wholesale pineapple importing opportunities for the U.S. and E.U. markets are for fresh fruit. (Alibaba)

#20. Top exporters of pineapples have recovered from the recession years of 2007-2009 to experience average annual growth rates that are as high as 11% in the Philippines. (Food and Fertilizer Technology Center) 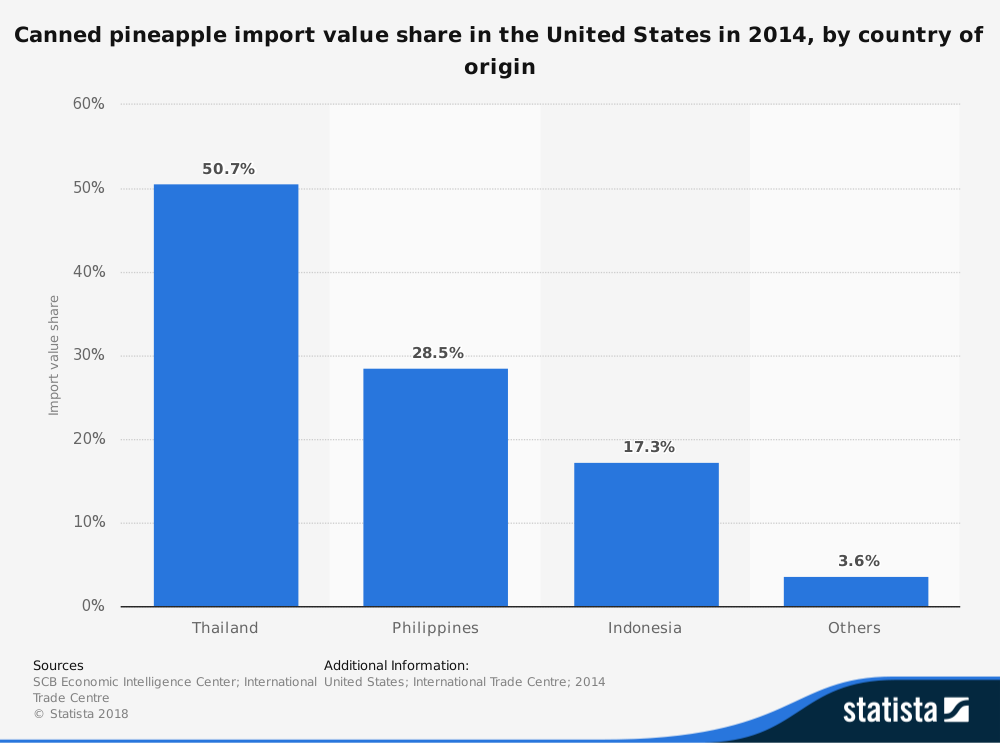 #21. Pineapple exports tend to focus on regional shipments to preserve the quality of the fruit. Japan, for example, accounts for almost 90% of the total export market for pineapples that originate in the Philippines. (Food and Fertilizer Technology Center)

#22. About 300 billion pineapples are farmed every year around the world. About 400 million of those pineapples still come from Hawaii, usually between the months of March and July. That means Hawaii accounts for 0.13% of the global pineapple industry. (Smithsonian Magazine)

#23. In 1901, Dole opened the Hawaii Pineapple Company. By 1923, they were the largest provider of pineapples to the world. Eight companies dominated the market through the 1940s, providing employment to over 3,000 people on the islands. (Smithsonian Magazine)

The pineapple is a unique product. It isn’t a single fruit, like some may believe, but a collective fruit because it is a group of berries that fuse together. Eating pineapple provides a good dose of Vitamin C. Pineapples also contain bromelain, which breaks down proteins quite effectively. The bromelain is so strong, in fact, that long-term pineapple harvesters may not have fingerprints because the proteins in their skin have broken down.

Under-developed markets could be reached within the next decade to help the industry continue its expansion efforts. Look for shipment efforts to increase to Russia, the Middle East, and Eastern Europe as logistics chains mature.

The pineapple industry has seen some changes over the past century. New sectors are springing up as once dominant regions, like Hawaii, move in a different direction. With a long tradition of growth and increasing sales, the pineapple industry looks to continue down a path toward consistent success.