With over 17,000 acres of vineyards planted, Ontario is Canada’s leading province for wine production. In 2013, over 77,000 metric tons of grapes were processed, of which 51,200 tons were Vinifera grapes. That placed the value of the annual wine crop at just over C$101 million.

Niagara is one of the most valuable regions for the wine industry in Canada. In 2013, the value of vineyard land in this region of Ontario was more than C$40,000 per acre.

Part of the reason for these increased values is the fact that winemaking is becoming more popular in the province. Since 2003, the number of active VQA wineries in the Ontario wine industry have more than doubled, going from 66 to 150 in 2014. These activities produce wholesale revenues of $40 million and generate more than 1.8 million visitors to a winery each year. 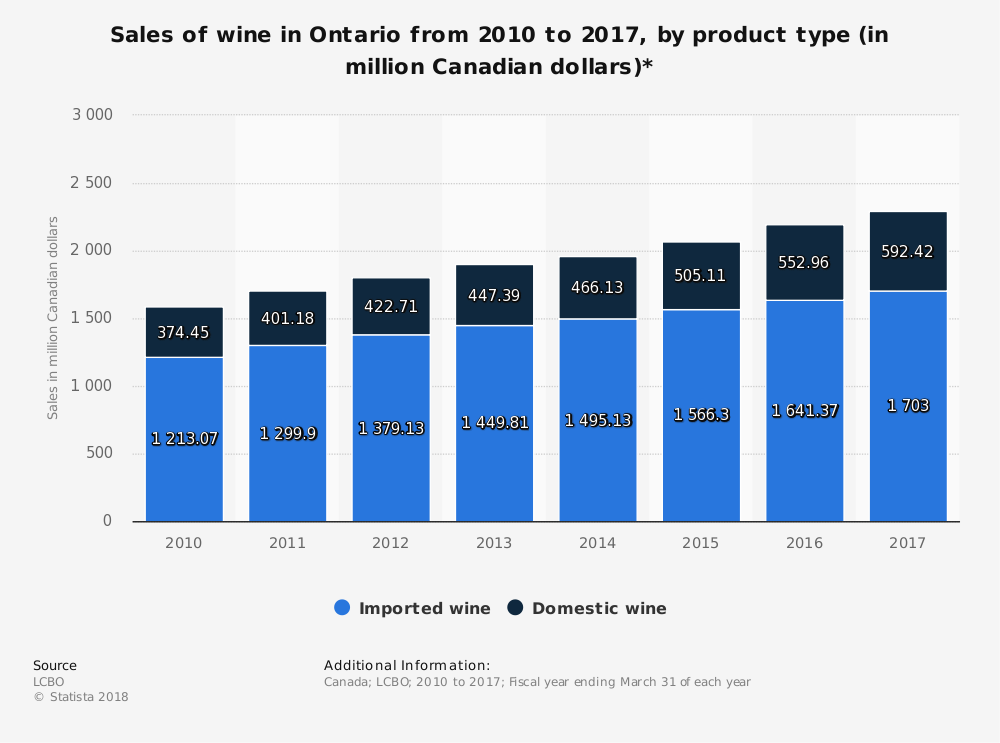 #3. Global wine export volumes are 12.1 billion liters, which Canada holds a 0.02% market share of, according to 2017 figures. That places Canada as the 35th largest producer of wine exports in terms of value. (Canadian Vintners Association)

#4. Although Canada’s share of the global wine market is minimal, the country is the largest producer of Icewine, which represents 62% of Canada’s total export value. (Canadian Vintners Association)

#5. Ontario is the largest exporter of Icewine in Canada, with an annual value of more than C$21.3 million. British Columbia comes in second, with just C$3.2 million in exports. (Canadian Vintners Association)

#6. The sales of VQA wine in Ontario contributed C$395 million to the economy for the retail year that ended in March 2014. That figure was generated on a volume of 17.5 million liters. (Wine Country Ontario)

#7. Every bottle of VQA wine sold in Ontario generates C$12.29 in added value to the economy. That creates a total added value for the province of more than C$200 million each year. (Wine Country Ontario)

#9. 23.4 million liters of VQA wines are produced in Ontario each year. There are 800,000 liters of Icewine and 150,000 liters of late harvest wine added to the figures as well. (Wine Country Ontario)

#10. 90% of the Icewine that is produced in Canada each year comes from Ontario. (Wine Country Ontario) 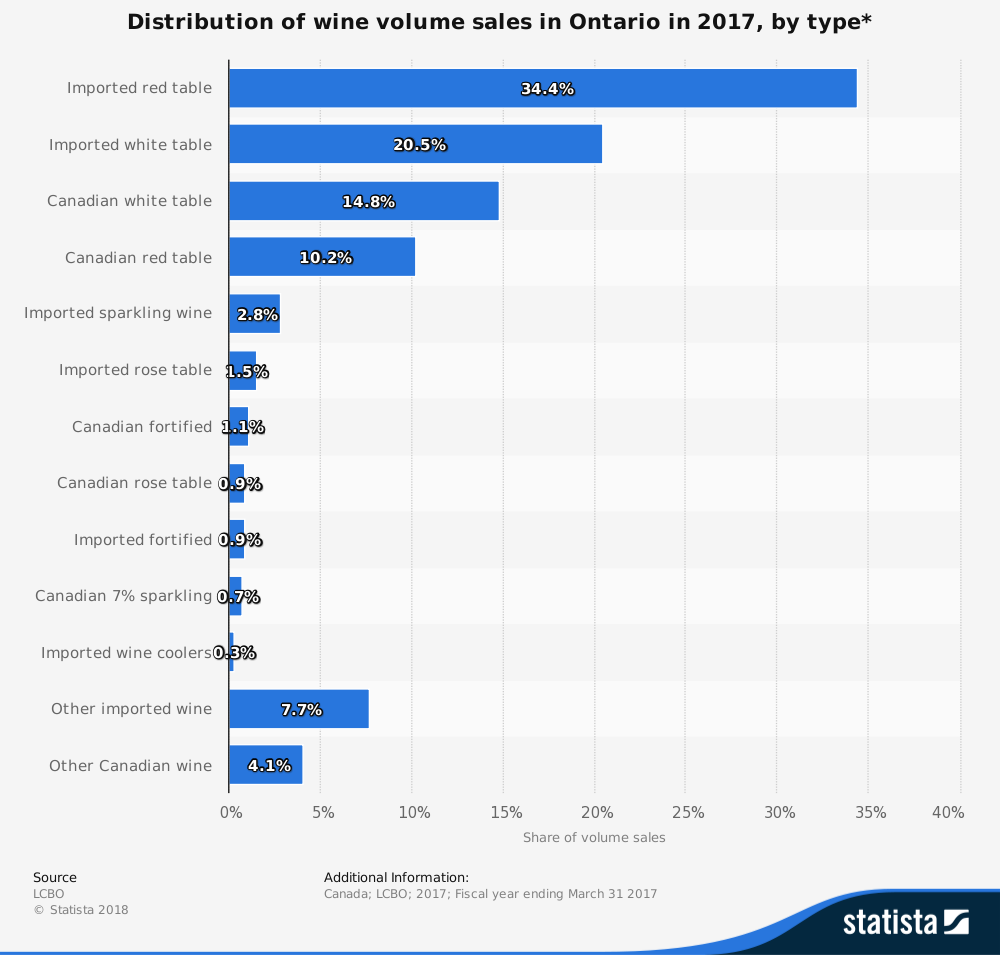 #11. Most of the wineries in Ontario see total sales of C$2 million or less. 78 active wineries in the region fit into this category. In comparison, just 14 wineries say they create $5 million or more in revenues. (Deloitte)

#12. 73% of wine sales that occur in Ontario are through VQA wine sales through wineries that earn C$500,000 or less per year in total sales. (Deloitte)

#13. Sales and marketing costs account for 11% of the sales which occurred in the C$500k to C$2 million segment. (Deloitte)

#14. There are about 1,300 grape growers in Canada which help to supply products to the wineries. About 1 in every 2 grape growers does not make their own mine products. (Wines of Canada)

#15. About C$2.2 billion in wine sales occurs in Ontario each year, while the rest of Canada generates C$4.2 billion in sales. (Statistics Canada)

#16. Ontario’s beverage alcohol market is believed to be worth about C$10 billion. The LCBO transferred a C$1.9 billion dividend to the provincial government in the 2015/16 sales year on net sales of C$5.6 billion. (WGAO)

#17. 7.8 million shoppers come through the LCBO each year, shopping for products offered by the Ontario wine industry. With 3,200 total suppliers, the LCBO offers direct employment opportunities to 9,300 people. (WGAO)

#18. Over 137 million transactions are conducted each year through the LCBO. (WGAO)

#20. LCBO wines hold a 27% market share of retail sales in Ontario, with vintages making up another 10% of the sales volume. (WGAO) 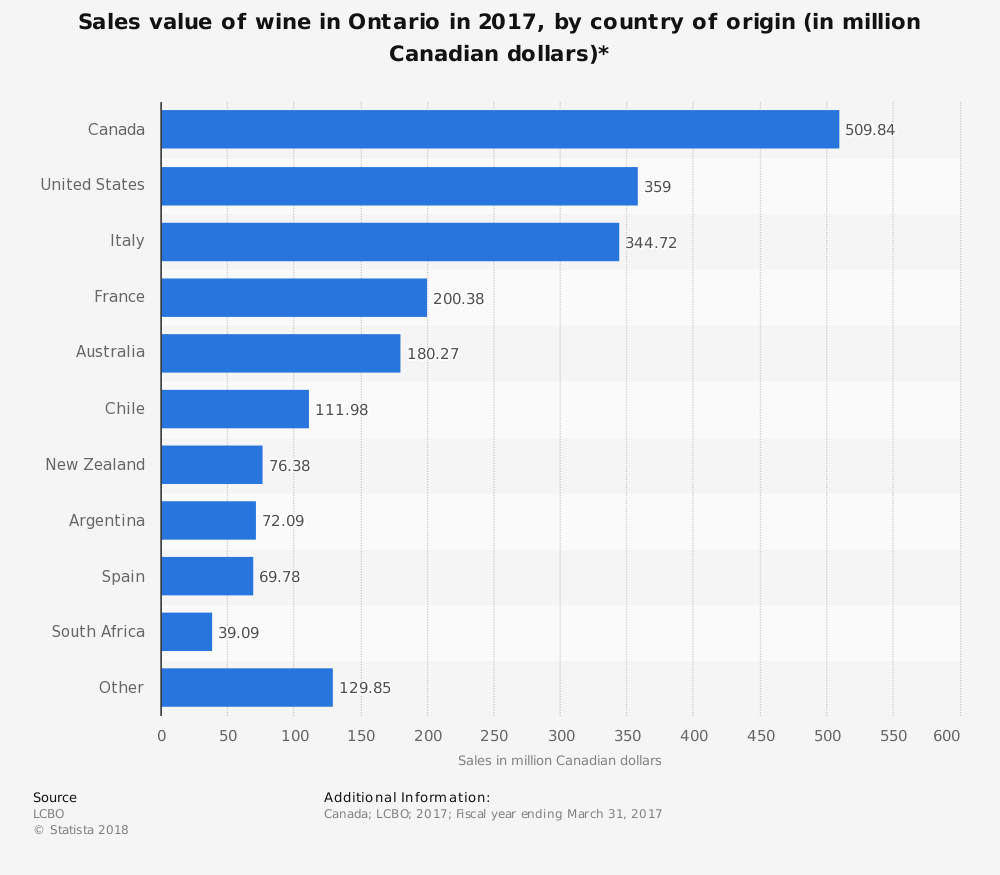 #22. Ontario wines contribute C$480 million to LCBO sales, which is an increase of 7.5%. ICB sales make up a majority of this figure, at C$291 million in revenues. (WGAO)

Wineries in Ontario tend to focus on Pinot Noir, Riesling, Chardonnay, and Cabernet Franc. There is also growth found in the production of sparkling wine. Although it is one of the leading regions for wine production in Canada, there are more wineries located in British Columbia. At the time of writing, there were 150 wineries working with the Ontario wine industry within 3 designated viticulture areas.

The cost of complying with government regulations, along with the gross margin on their sales through the LCBO, are considered the biggest challenges facing the industry. Total visitor numbers are increasing. Over 60% of wineries that earn C$500,000 or more in sales each year are profitable.

That means a shift in focus is upcoming for this industry. Instead of trying to grow a market share, look for the larger producers to begin improving their efficiencies instead. They will become the price leaders in the market, directing the disruptors to create consistent pricing with their bottles of wine.

Canada will also continue its role as a world leader in the production of Icewine. Expect the industry to see growth at a 1.5% to 3% rate over the coming decade.