LED lighting is an industry that comes with numerous advantages compared to other lighting products, such as incandescent bulbs. LEDs are extremely energy efficient, for example, using up to 90% less power compared to incandescent lights. That allows homeowners to reduce their energy consumption costs, since each LED light uses a fraction of the power.

Even entry-level LED lights, when compared to high-efficiency incandescent, halogen, or fluorescent lights, can save up to 50% on energy costs.

They work in the cold. They are highly-resistant to breakage. They turn on with full brightness almost immediately. There are no UV or IR emissions. That is why the LED lighting industry is evolving how we all think about energy consumption.

#1. By the year 2020, LED lights are expected to achieve a 61% penetration rate in the global lighting market. This can be achieved if global sapphire production increases, which would drop the pricing point for LED lamps. (Statista)

#2. The global LED lighting market outlook by 2020 is expected to reach as high as $78.8 billion. North America is expected to have about 25% of the total market share in terms of revenue. (Statista) 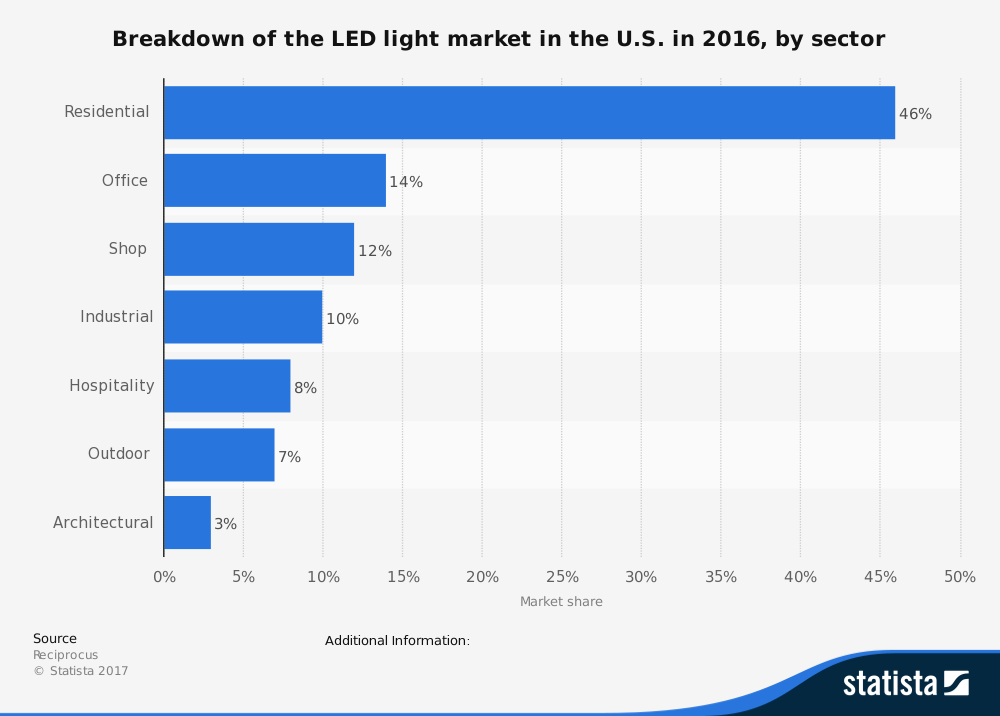 #3. China is one of the world’s leading producers of sapphire for LED lighting manufacturing. They currently hold one-third of the current global production capabilities. (Statista)

#4. Automotive lighting in the global LED lighting market accounts for 13% of the total sales the industry is able to achieve each year. (Statista)

#5. For A-type lamps in the United States, incandescent lights still hold a 26% market share of the lighting industry. This creates a large market segment that offers a place for LED lighting to expand into in future years. (Statista)

#6. By the year 2030, the U.S. Department of Energy estimates that LED lighting has the potential to save 190 terawatt hours of electricity each year, which equates to $15 billion in energy costs. (General Electric)

#7. In the United States, 58% of Americans say that they prefer using LED bulbs over other types of lighting. For total lamp inventory in the U.S., the residential share of the market is 71%. (Statista)

#8. General Electric is the leading light bulb brand in the United States. They generate over $540 million in revenues each year from this market. (Statista)

#9. 11.5% of the total sales that Osra Sylvania generates in the average year comes from the sale of light bulbs. (Statista) 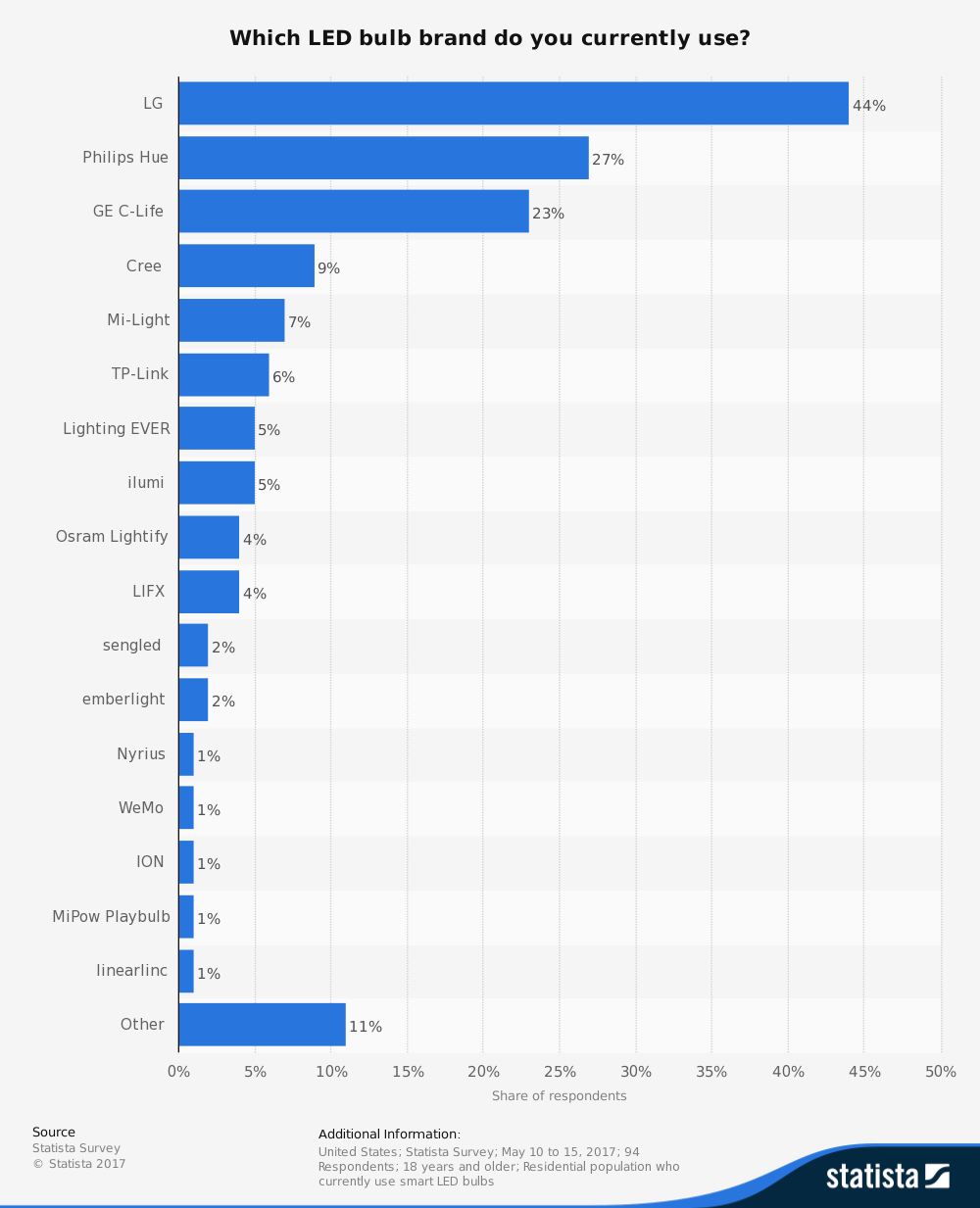 #12. The residential application segment dominated the LED lighting market in 2016, accounting for over 40% of the total market share. This includes lighting products for indoor and outdoor applications, from exterior lighting to bathroom lighting. (Zion Market Research)

#13. Europe is expected to continue leading the LED lighting industry in total market share, accounting for 31% of total sales in 2016. (Zion Market Research)

#14. By 2027, the use of LED lighting could save up to 348 terawatts of energy compared to no LED use. That is the annual electrical output of 44 large electric power plants in the United States. If achievable, that would be an energy cost savings of more than $30 billion at current pricing levels. (U.S. Department of Energy)

#16. There are currently an estimated 500 million recessed downlights installed in U.S. homes right now. More than 20 million are sold annually. By transitioning to LED technologies for this lighting option, downlight wattage can be decreased by 75%, if not more. (U.S. Department of Energy)

#18. Over the course of 10 years, the transition to LED lighting from other lighting options could reduce carbon dioxide emissions in the United States by 100 million metric tons annually. (Think Progress) 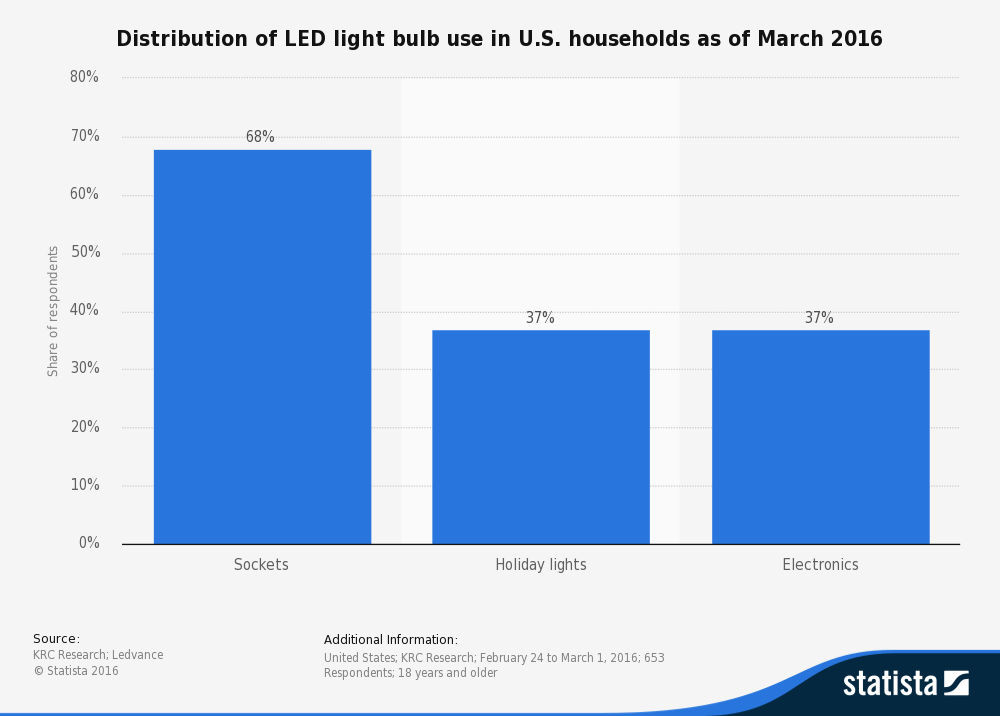 #22. By 2020, the LED lighting industry is expected to be responsible for more than 60% of the global base and account for at least 69% of light bulbs that are sold. (Think Progress)

#23. An LED light bulb can operate for 5 years nonstop. If used for just a few hours per day, the potential lifespan of the light bulb could be several decades. (Think Progress)

The LED lighting industry is just getting started. Pricing for LED light bulbs have been steadily decreasing, which is a trend that is expected to continue. When combined with the energy cost-savings that business owners and homeowners can achieve with this product, these light bulbs can pay for themselves over time.

At the same time, the global lighting market is expected to increase as well. Electricity distribution continues to increase, reaching areas of the developing world every day for the first time. As these areas mature and grow with improved infrastructure, the need for affordable lighting will be present. The LED lighting industry is poised to fulfill this need.

The only question of uncertainty which lingers is the competitiveness of the global sapphire market. If production levels decrease, then pricing declines will be slower than anticipated and that could reduce the expansion potential of the industry.