Ethanol is a liquid fuel that is colorless, flammable, and volatile. It is produced through the natural fermentation of sugars. It comes from plant-based material. In the United States, the world’s leading producer of ethanol, corn is the primary foundation of the fuel. In Brazil, sugarcane is the primary product used to create fuel.

Although ethanol can be used on its own, the most common usage of this fuel is to blend it with gasoline. This creates what is called an “e-ratio.” A fuel that is listed as being E10 would therefore contain 10% ethanol. In Brazil, E27 fuel is common. Some vehicles can handle fuels as high as E85.

In the United States, for a vehicle to use a blend that is higher than E10, modifications must be made to prevent damage from occurring.

#1. In the United States, ethanol production feedstocks are 90% corn and 10% wheat or sorghum. (University of Illinois)

#2. There are currently more than 180 ethanol plants currently operating in the United States right now. They produce about 9.2 billion gallons of ethanol fuel from an installed capacity of 10 billion gallons. (University of Illinois) 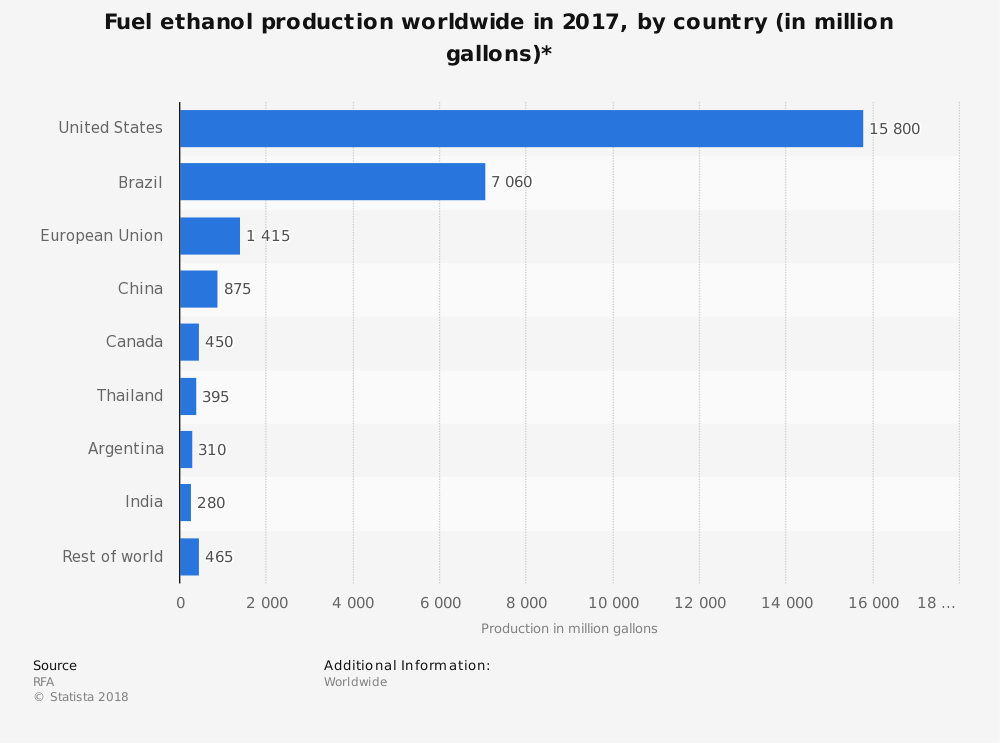 #3. About 23% of U.S. corn production is dedicated to the ethanol production industry. For every bushel of corn that is produced, which is the equivalent of 56 pounds, about 2.8 gallons of ethanol can be created. (University of Illinois)

#5. The ethanol industry in the United States is responsible for the direct employment of about 72,000 people in any given year. When indirect employment figures are included, the industry supports a total of about 285,000 jobs. (Statista)

#7. More than 97% of the gasoline which is sold in the United States contains ethanol. (U.S. Department of Energy)

#8. The current estimated value of U.S. exports for the ethanol industry is $2.1 billion. Another $1 billion in exports is possible through the grains and oils that are also exported by the industry. (Renewable Fuels Association)

#10. In 2016, 37% of the U.S. corn stock was dedicated to the ethanol industry. That meant about 5.2 billion bushels of corn was used to create fuel. (University of Michigan) 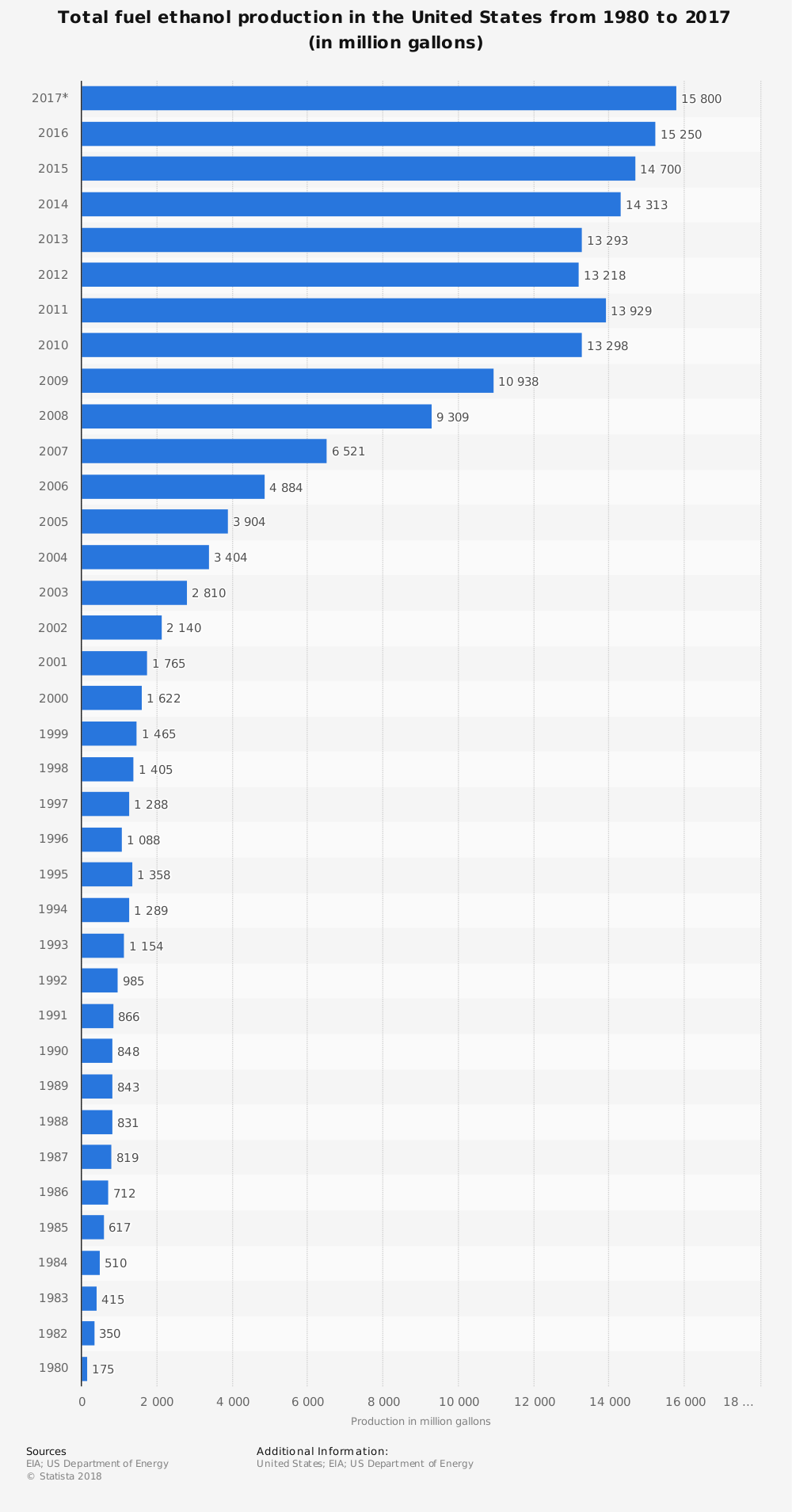 #12. The State of Minnesota is one of the top contributors to the U.S. ethanol industry. About 700,000 gallons of excess ethanol from the state enters the domestic and international supply every year. (Minnesota Biofuels Association)

#14. Only South Africa has been able to displace Brazil as the second-leading producer of ethanol in the world, which occurred in 2012. In that year, South Africa produced 223,000 gallons of ethanol. (Renewable Fuels Association)

#16. Iowa has the largest overall production capacity for ethanol in the United States. The state currently has an operating production of 4 billion gallons per year. If every state was evaluated independently as every country in the world, Iowa would be the world’s third-largest producer of ethanol. (Renewable Fuels Association)

#17. More than 40 installed ethanol biorefineries are operating in Iowa right now. Only Nebraska and Minnesota have more than 20 operating biorefineries. (Renewable Fuels Association)

#18. Every bushel of corn sent to the U.S. ethanol industry will also produce 16.5 pounds of distiller’s grains for animal feed, 17 pounds of biogenic carbon dioxide, and about a half-pound of corn distiller’s oil. Cattle, both dairy and beef, are the primary recipients of the feed products, accounting for 74% of this component of the ethanol industry. (Renewable Fuels Association)

#19. Although the ethanol industry added $42 billion to the GDP in 2016 for the United States, net farm incomes in the country fell to a 7-year low in the same year. (Renewable Fuels Association)

#20. In a recent survey of employees that have work through the ethanol industry, more than 90% of them said that they are satisfied with their jobs on some level. (Ethanol Producer Magazine) 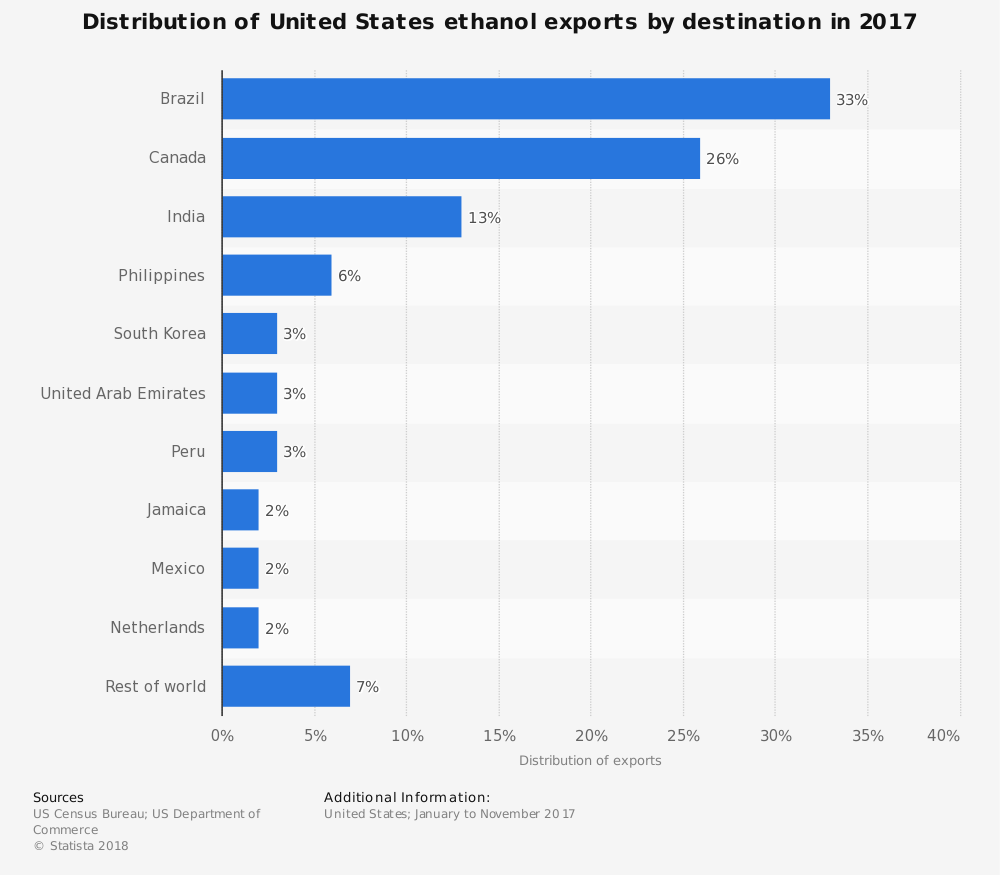 #21. Canada receives the largest supply of U.S. ethanol exports annually, accounting for 25% of total export revenues generated. Brazil receives 24% of the U.S. export market for ethanol, despite their status as the second-leading producer in the industry. China receives 19% of U.S. ethanol fuel exports. In total, the U.S. industry exports ethanol to almost 50 countries. (Renewable Fuels Association)

#22. Despite being a global leader in ethanol production, the U.S. also imports ethanol each year. Most years, fewer than 200 million gallons are imported, but in 2006-2008 and 2012-2013, more than 400 million gallons was imported by the industry. (Renewable Fuels Association)

Biofuels are seeing growth levels that average about 3% annually. For ethanol, one of the world’s most popular biofuels, consumption levels continue to be extremely high. Total production of ethanol in the United States has more the doubled since 2007.

At the same time, U.S. demand for ethanol has continued to rise as well. Although the U.S. is the world’s largest producer of ethanol by far, the total installed capacity barely meets domestic needs. That means export opportunities for this fuel are quite limited.

Brazil faces a similar struggle, especially since the average driver consumes twice as much ethanol for their transportation needs as American drivers consume.

The demand to create fuels that are environmentally-friendly, and even carbon-neutral, will keep ethanol demand levels quite high in the future. Until other countries begin to install new production facilities, expect the U.S. and Brazil to dominate the ethanol industry for the foreseeable future.