Edtech is short for “educational technology.” It is an industry that supports ethical studying practices while it facilitates the learning process and improves student performance and productivity. The industry is currently estimated to be worth $8 billion dollars. The student population is expected to increase to $2.7 billion by the year 2035.

The focus tends to be on advanced technologies, such as computers and mobile devices, within this industry. At the same time, everything from school desks to chalkboards to pencils are all part of this industry as well. Although the segments are quite varied, each has the same goal: to provide the best education format to each student, so their learning opportunities can be maximized.

#1. David Bainbridge forecasts that the edtech industry will reach a global value of $252 billion by the year 2020. (Forbes)

#2. Over 138 venture deals in total, U.S.-based edtech companies were able to raise a total of $1.03 billion. Startup companies that focused on the corporate or secondary learning market raised the most money, totaling $593 million in 2016. (Forbes) 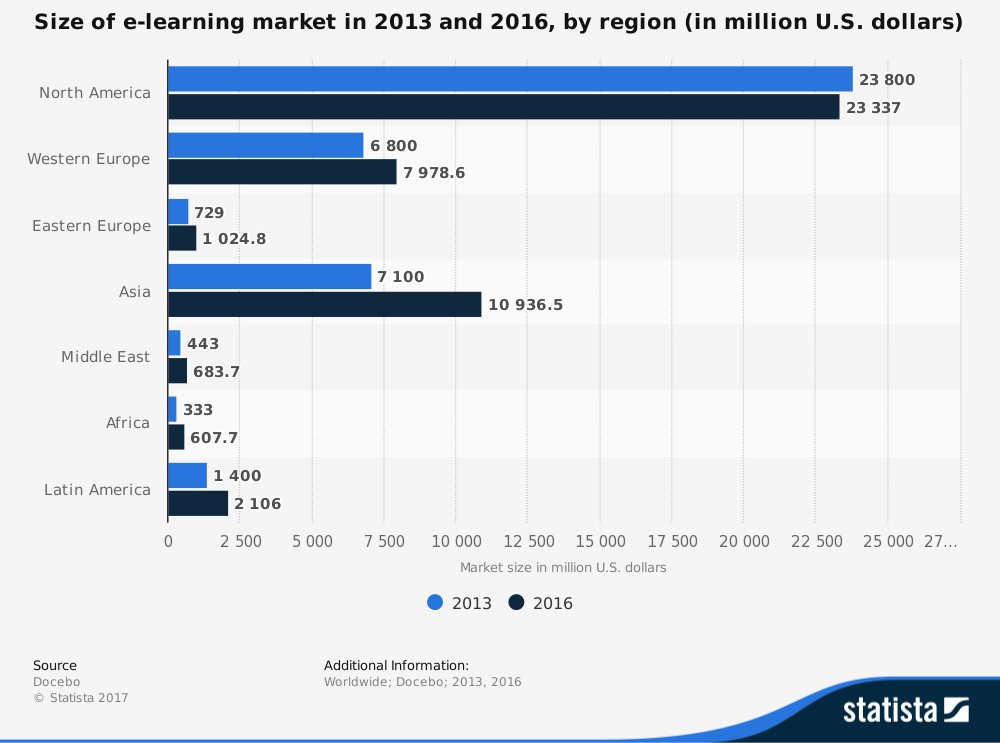 #3. The overall education market is one of the largest in the world today. More than $5 trillion is spent globally each year on students in primary, secondary, and corporate learning. (Tech Crunch)

#4. The edtech sector already contributes 1 billion pounds to the economy of the United Kingdom each year. More than 1,000 startups are currently operating in Britain right now, leading the world in total startup numbers. (Tech Crunch)

#5. In 2014, the valuations of the edtech industry in the United States was an estimated $8.38 billion. (Education World)

#7. From a global standpoint, edtech investments account for just 2% of the $58.8 billion invested by the VC industry in 2015. That’s an increase from the 0.9% of the market that educational programs received from the VC industry from 1995-2011. (EdSurge Research)

#9. The edtech market in North America is expected to continue growing rapidly, with a 9% CAGR forecast through 2019. (Technavio)

#10. Software and services are the largest segment of the edtech industry. In 2014, the market share for this segment was nearly 60% and it will continue to drive the industry forward toward record profits in coming years. (Technavio) 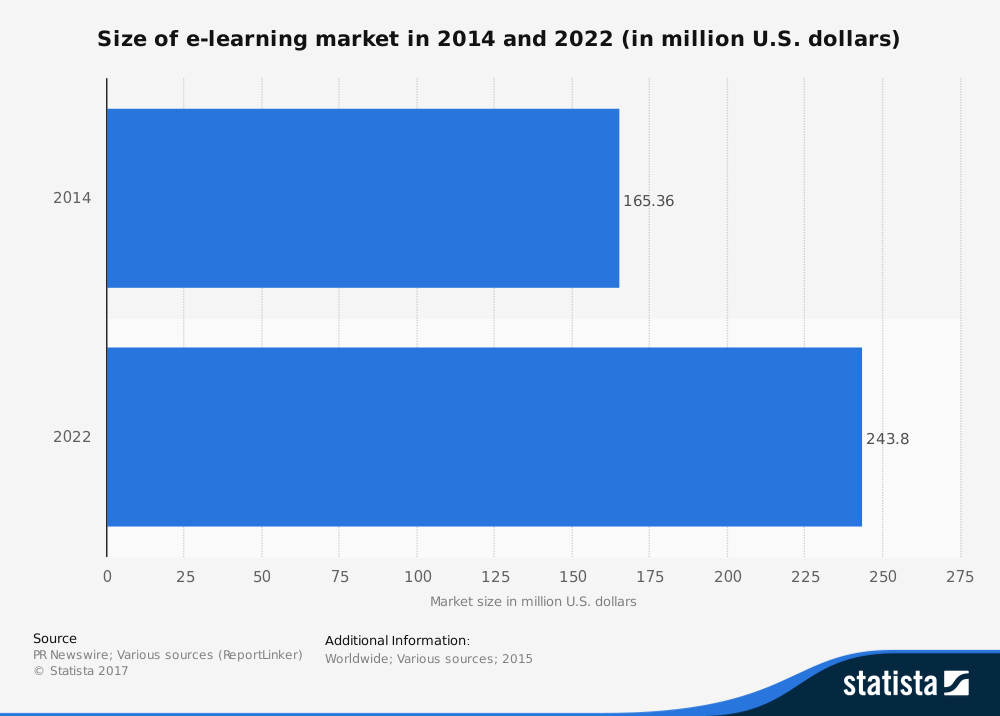 #11. The global edtech market globally reached nearly $18 billion in revenues by 2017. Forecasts through 2022 have the CAGR reaching 18.3% for the industry. (Business Wire)

#12. The edtech industry in China is forecast to grow at a rate of nearly 20% annually. To foster this growth, global investors put over $8 billion into the industry over the first 10 months of 2017. Investments into Chinese edtech companies reached $1 billion for the first time in 2017. (Tech Crunch)

#13. By 2020, the APAC region is expected to represent a 54% share of the global edtech market by 2020. More than 600 million students are already enrolled in primary schools within the region, 10 times more than the number of students enrolled in the United States. (Tech Crunch)

#14. After-school tutoring is expected to grow to a $90 billion segment of the industry by the year 2020 in China. (IBIS Capital)

#15. In Singapore, parents spend more than $70,000 per year on the education of their children. That is nearly twice the global average. (Tech Crunch)

#16. The educational apps market in the United States was valued at $2.5 billion in 2016. (Australian Trade and Investment Commission)

#17. There are more than 15,000 decision-makers currently involved with the edtech industry at the school district level. More than 1,500 community colleges and 3,500 universities are actively involved in the U.S. industry as well. (Australian Trade and Investment Commission)

#19. Until the 2016 election, the U.S. had an official policy in place to have 99% of students connected to the internet. (Australian Trade and Investment Commission)

#20. The U.S. has been the global leader in edtech fundraising until the middle of 2017, accounting for a total of 58% of global deals reached by the industry. (Australian Trade and Investment Commission)

#21. Eight of the 12 highest-valued edtech companies in the world, as of 2016, were based in the United States. Three companies, Age of Learning, PluralSight, and Udacity, have been valued at over $1 billion. (Australian Trade and Investment Commission)

#22. Nearly 500 deals that have involved the edtech industry from 2011-2016 were based in the San Francisco Bay Area. The region has more 250 school districts with over 80,000 students and over 90 colleges and universities. (Australian Trade and Investment Commission)

Our world is a changing place. The current generation of students has always been exposed to the computers, mobile devices, and other technologies that have made life easier and more productive for us. It is only natural that they would want to have these items included in the classroom.

Some early Millennials experienced the same type of childhood. With Apple making the MacIntosh an affordable personal computing platform, many of today’s parents grew up with a advanced technologies in the home as well. They have benefitted from this experience, so now they want to invest into this experience for the next generation as well.

Where the strength of the edtech market will be in the future is China and the Pacific region. 70% of the companies that are raising nine figures for their startups are based in the region. Nearly 1 billion students will be enrolled into educational programs in this region.

Growth within the edtech industry will be far from smooth or stable. As technologies evolve, new opportunities will eclipse the current options that are available. There will be growing pains, but it is difficult to see this industry going anywhere but upward for the foreseeable future.