#1. In the United States, there are about 20,000 firms which describe themselves as a coffeehouse right now. Their combined annual revenues are about $10 billion. (IBIS World)

#2. Major names like Starbucks, Dunkin’ Donuts, and Peet’s Coffee dominate the industry. The top 50 brands in total revenue generation create about 70% of the overall sales experienced by the industry every year. (IBIS World)

#3. The average American will consume about 10.2 pounds of coffee over the course of the year. (Statista)

#4. Total global coffee production in the past year was 158.9 million 60kg bags. As part of the overall food and drink industry, the coffeehouse industry is part of a $782 billion market. (Statista) 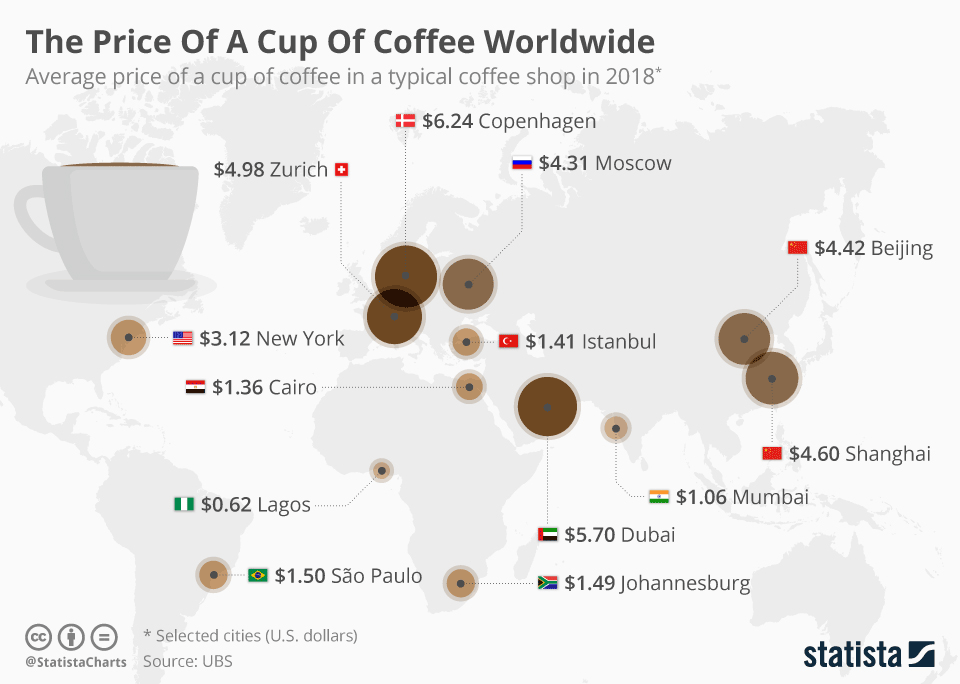 #6. In the past year, the sales of Keurig Green Mountain coffee topped $1.15 billion. In comparison, the sales generated by Starbucks totaled $612 million, with revenues of $21.1 billion. (Statista

#7. There are more than 27,000 Starbucks locations in the world today. The company owns a 40% share of the U.S.-based coffeehouse market. Dunkin’ Donuts owns a 21.9% share of the U.S. market right now. (Statista)

#8. 32% of Americans say that they spend $5 or less on coffee per week. 44% of Americans, however, report that they drink at least two cups of coffee every day. (Statista)

#9. 45% of Americans say that they have visited a Starbucks location at least once in the past year. (Statista)

#12. 54% of adults in the 25-39 age demographic report drinking coffee on a regular basis as well. The preference for coffee is stronger than a person’s monetary situation. 46% of coffee drinkers say that their financial situation is the same as it was in 2010. (SBDCNet) 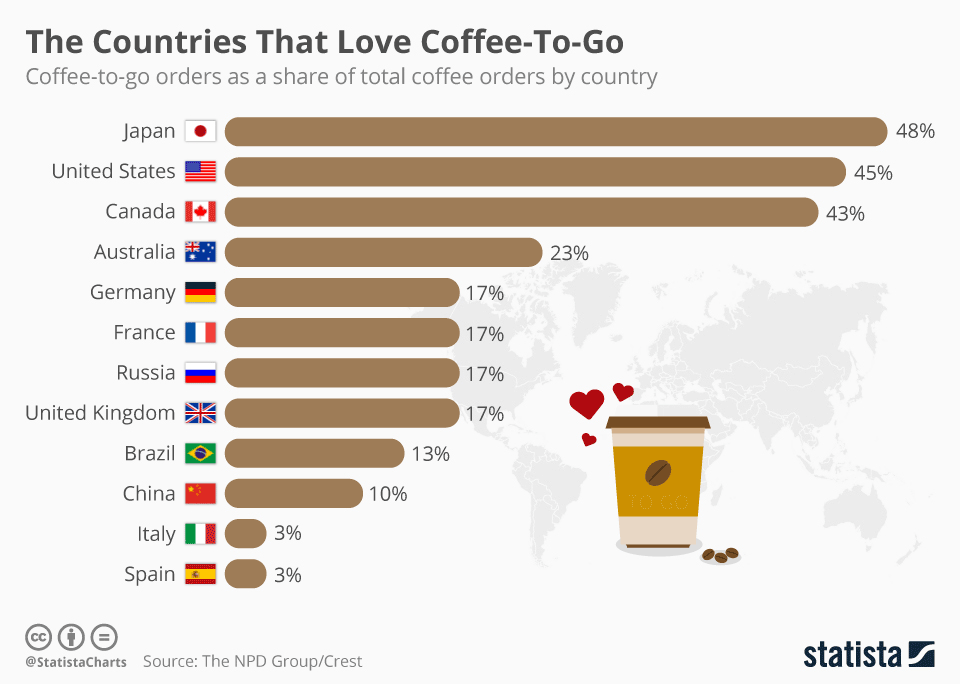 #13. About 75% of U.S. adults drink coffee on a regular basis. 58% drink coffee every day. That means there are an estimated 183 million people who consume coffee in the U.S. regularly. (SBDCNet)

#14. Coffee sales are 83% of the total hot beverage market in the United States. Consumption of coffee is expected to continue rising over the next 5-year period at a rate of 2.7%. (SBDCNet)

#16. 13% of coffee drinkers in the 21+ age demographic said they’d be interested in consuming an alcoholic cold brew coffee beverage. (Mintel)

#17. About 773,000 people are currently employed by the coffeehouse industry in some way in the United States right now. About 20% of these employees hold down a job at a local Starbucks location. In total, there are about 67,000 businesses currently operating in this industry right now. (IBIS World)

#18. Between 2013-2017, the annual average rate of growth for the coffeehouse industry was 5.9%. When snack shops are added into the industry profile, about $49 billion in revenue is generated annually. (IBIS World)

#19. Independent coffeehouses are able to generate about $12 billion in sales on their own. There are about 24,000 independent coffee shops currently operating in the United States, each serving about 250 cups of espresso and other coffee-based drinks each day. (Espresso Business Solutions)

#20. The average price for an espresso beverage in the United States is $3.45. Consumers can save a little by purchasing a brewed coffee, with an average price of $2.38. (Espresso Business Solutions)

#21. The average cup of coffee sold in the U.S. is 9 ounces. 65% of all coffee products are consumed during breakfast hours. Another 30% are served during snacks or between meals. (Espresso Business Solutions)

#22. 65% of consumers who drink coffee regularly prefer to add something to it, such as cream or sugar. (Espresso Business Solutions)

#23. Workers in the coffeehouse industry average about $50,000 in annual sales per worker. About 75% of the caffeine that is consumed in the United States is done so through coffee. When these two facts are combined, coffeehouses represent the fastest growing segment of the food and beverage industry. (San Francisco Chronicle)

The coffeehouse industry is continuing to thrive, bringing in billions in revenue each year as everyone seeks to have their morning fix of this beverage. It is an industry that is dominated by the big chains. Starbucks currently owns more than 7,500 stores in the United States. On their own, they have 157,000 U.S.-based employees and over 300,000 employees worldwide.

There are even 14.9 million active members in the My Starbucks Rewards program.

It is a market, however, that is mature and only see bursts of growth when there are innovative products available to consumers. Coffee may be an essential part of the day to a consumer, but it must include more than just a fix of caffeine. Consumers are looking for environmentally friendly options. They want coffeehouses to be socially conscious of current issues and events.

For that reason, the coffeehouse industry is still somewhat chaotic. It may continue to be unpredictable for some time to come. At the same time, however, there is no reason to believe that revenues will decline for this industry any time soon.