Vietnam is considered the largest cashew nut exporter in the world. Vietnam exports cashews to more than 90 countries and territories. The United States is the largest importer, accounting for 35%. While there are 400 nut export enterprises, more than half of the market share is only concentrated in just 30 enterprises. Here is a look at some of the best cashew processing industry statistics that highlight this nuts versatility.

#1. In Africa and Asia, more than 80% of the overall cashew cultivation is performed by small farms and family workers. The largest farms in this category have a maximum of 5 hectares of agricultural space. (Mordor Intelligence)

#2. Up to 15% of the cashew harvest in any given year is performed by large-scale plantations in countries like Nigeria, India, Benin, and Vietnam. (Mordor Intelligence) 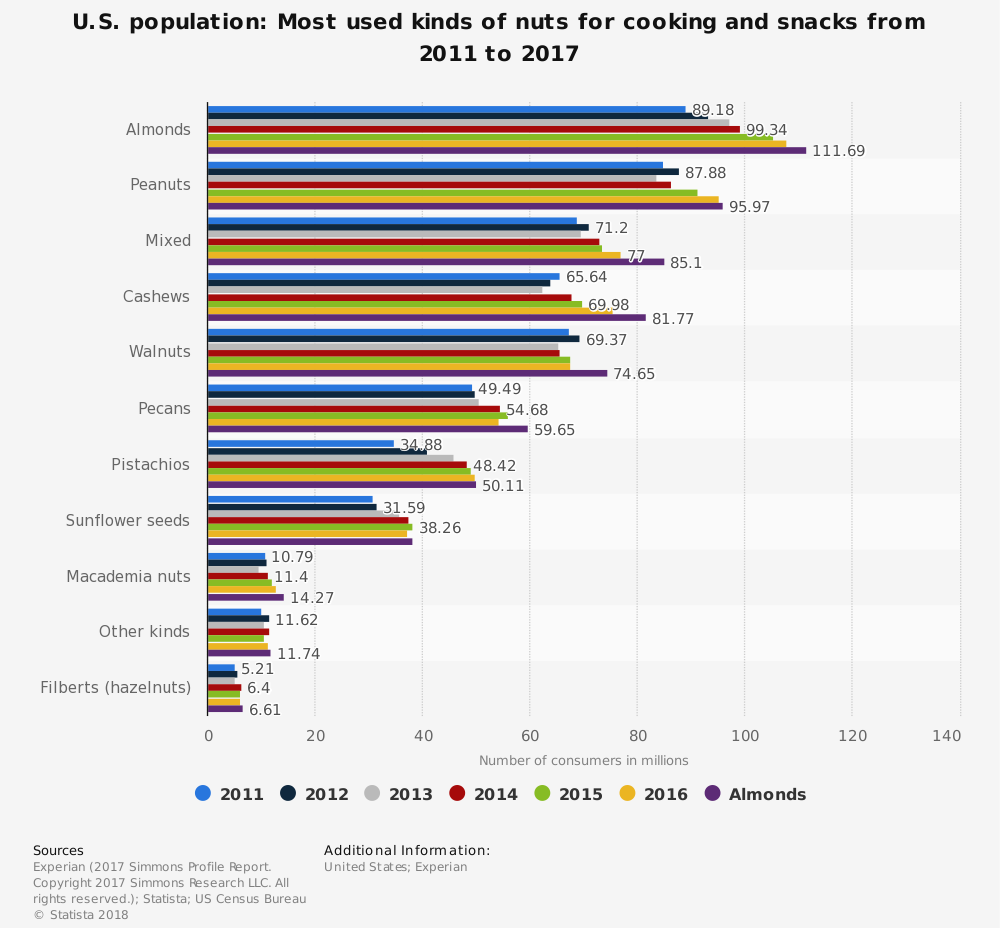 #3. India currently accounts for 40% of the total market share of the cashew processing industry. Vietnam accounts for one-third of the industry annually as well. (Mordor Intelligence)

#4. The largest importers of cashew products in the world today are India, Vietnam, and the United States. Together, these three nations account for 85% of total imports for the cashew processing industry. (Mordor Intelligence)

#5. Several different segments are available within the industry, including raw, roasted, broken, whole, kernels, and shell liquid. Each segment is affected by changing climate conditions that affected global harvests. In recent years, this has cause a 40% rise in pricing, allowing for the small farms to improve their returns. (Mordor Intelligence)

#6. Since 2006, Vietnam has been the largest exporter of cashew products. They account for 28% of the global industry’s processed raw nuts and 42% of the total export volume, despite being in second to India in terms of total market share. (Customs News)

#7. In 2016, Vietnam exported cashews to a total of 90 different countries and territories. The United States accounted for 35% of the total export volume, followed by the European Union (25%) and China (18%). (Customs News)

#8. There are currently around 400 cashew export enterprises located in Vietnam. About half of the entire segment in Vietnam is concentrated within about 30 different firms. (Customs News)

#9. Vietnam expects to export more than 360,000 tons of cashews in the coming year, which would have an anticipated value of more than $3 billion. (Customs News)

#10. West Africa is the second-largest region of the world in terms of global cashew production. The region produces about 475,000 metric tons of cashews each year, but processes less than 10% of its annual production. (United States Agency International Development) 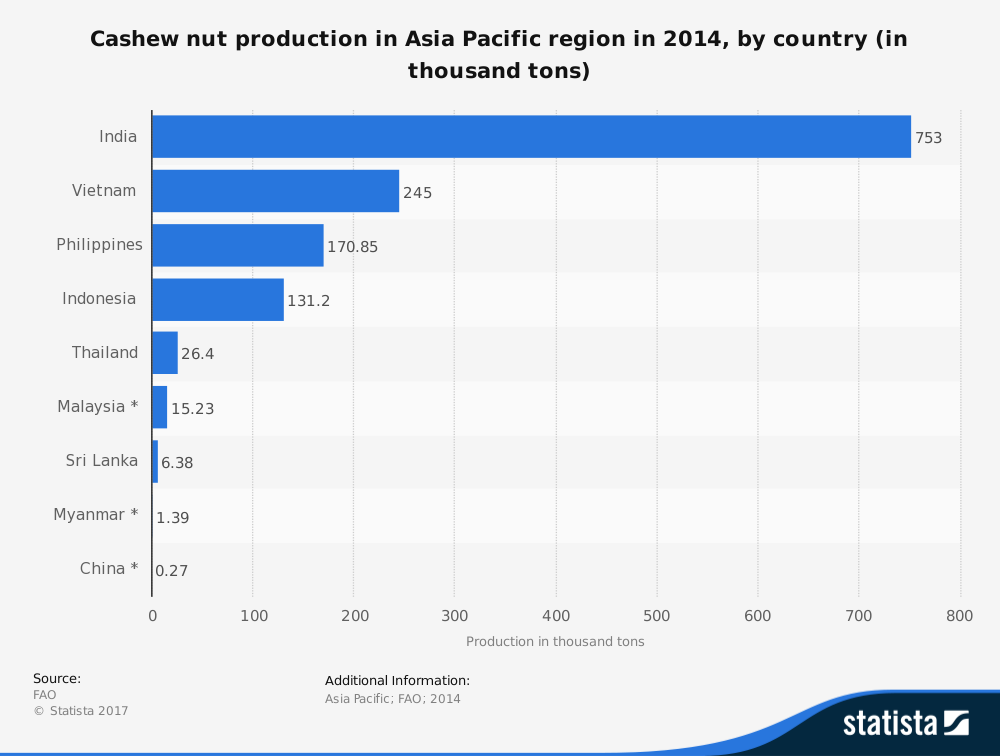 #12. Cashew kernels are sold in 26 different grades, which can make it difficult for small processors to sell globally. (United States Agency International Development)

#13. The U.S. has a priority for imported processed cashew kernels. In 2013, the United States accounted for 27% of global shelled cashew imports. (Mordor Intelligence)

#16. Cashew trees can live for up to 60 years, but most will only produce cashews for 20 years or less. Like any tree crop, cashew trees cycle about every 5 years, reaching one year of peak output. (Gambia Trade Info)

#17. Up to 180 trees can be planted in a single hectare or used with mixed cropping systems. (Gambia Trade Info)

#18. 80% of the world’s cashew suppliers are located north of the Equator, so peak harvesting times for this crop are usually between February and May. The other 20% of the crop is harvested between September and December. (Gambia Trade Info)

#19. The average worker can harvest about 50kg of cashew nuts per day. (Gambia Trade Info)

#20. Cashew apples can be picked and processed into juice or jam. The apples have a short shelf life, however, because they keep for only 24 hours after picking. (Gambia Trade Info) 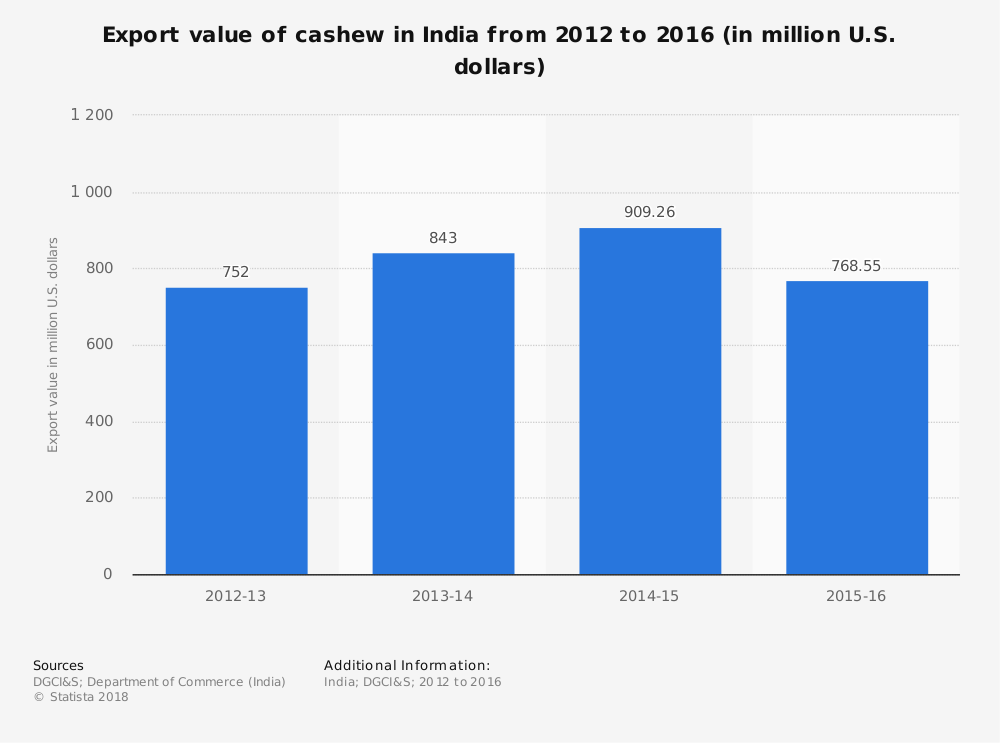 #21. Within the cashew processing industry, growers, processors, and exporters receive about 40% of the profits from the value chain. The other 60% of the value goes to foreign processors and market owners. The actual grower receives just 18% of the total price consumers pay for their product. (Customs News)

#22. In Vietnam, 95% of the processed cashew nuts are exported, leaving the remainder for the domestic market. (Customs News)

#23. The largest areas of growth seen in the past 12 months for the cashew processing industry has been Singapore, which has seen demand levels increase by over 20%. (Customs News)

There is a high level of global demand for cashews. Demand is so high, in fact, that pricing has recently hit unprecedented highs as shortages within the industry are discovered. India is one of the largest consumers of cashews, but meets up to 70% of its processing needs by using imports.

Changing weather conditions have stagnated some growing regions. India, for example, has been hovering between 600,000 and 700,000 metric tons of cashews for nearly a decade. At the same time, however, the processing capabilities of India have increased to over 2 million tons.

Crops in Cambodia and Vietnam have also fallen short in recent years by as much as 40%.

If growers can adapt to the changes seen in the climate or if new nations want to get involved with the cashew processing industry, then the current demand levels could be met within the next decade. If not, then expect shortages to continue and prices to continue rising as different markets compete for this amazing resource.