Humans have collected bees from honey since the beginning of known modern cultures. Artwork discovered in Spain, dated as being 8,000 years old, showed honey-collection activities were common. Early beekeeping may have involved pottery in North Africa more than 1,000 years before this. The first known domestication of bees, however, comes from Egypt around the 25th century BC.

There are more than 20,000 different species of wild bees, though most of the are solitary and do not readily make large hives that would be of suitable quality. For a colony to produce viable products, a population of up to 100,000 individuals may be necessary.

#1. Since February 2014, the price of honey in the United States has been above $6 per pound. (National Honey Board)

#2. Wholesale pricing for honey has been relatively stable as well, with prices above $5 per pound available since June 2016. (National Honey Board) 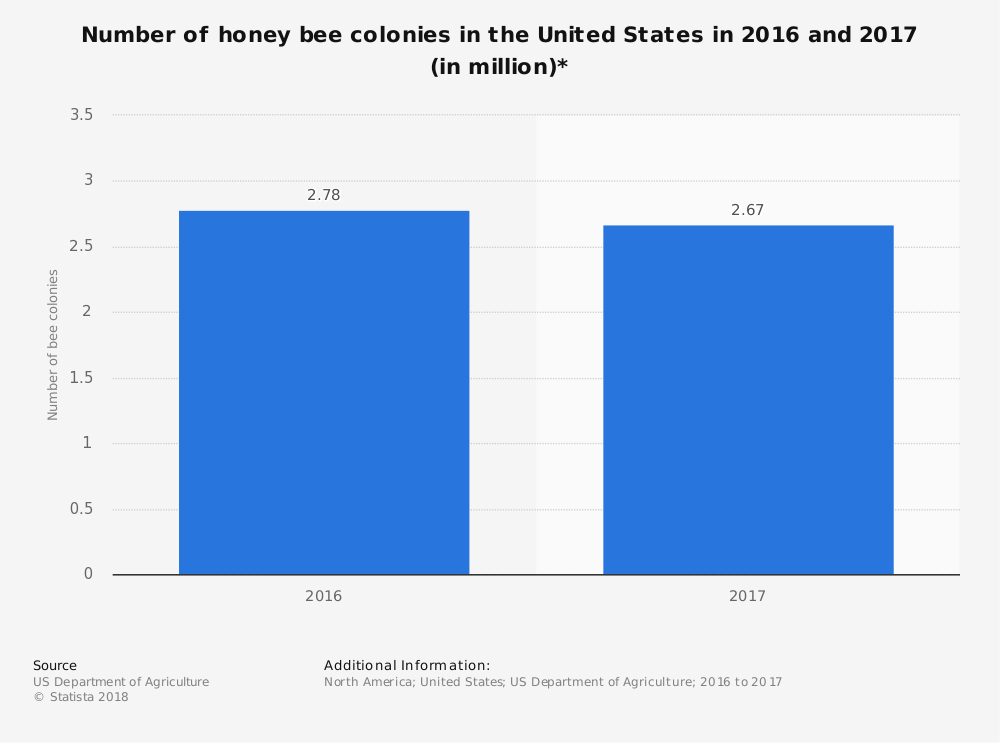 #3. International bulk prices for a pound of honey went from an average of $1.18 per pound in January 2017 to $1.72 per pound by December of that year. (National Honey Board)

#4. In the United States, the total value of the honey produced in 2016 was more than $335.9 million. There is a total of 2.77 million producing colonies that were registered in that year. (Bee Culture)

#5. The average yield for a colony producing honey in the United States is 58.3 pounds. The Hawaii-based bee industry sees the highest yields, averaging 113 pounds of honey per colony. They are followed by Louisiana at 86 pounds, Mississippi at 85 pounds, and Ohio, at 79 pounds. (Bee Culture)

#7. Beekeeping in the United States is primarily an individual-based business opportunity. There are more than 31,000 firms currently engaged with the industry, employing about 33,000 people. (IBIS World)

#8. For the 5-year period ending in 2017, the bee industry was able to achieve an average annualized growth in revenues of 2.1%. (IBIS World)

#9. In 2015, Canada reported the highest numbers of bee colonies in several decades, registering over 720,000. That was a 4% increase over the number of established colonies from the year before. (Canadian Honey Council)

#10. The value of the honey produced in Canada in the 2015 season was over $232 million, which was an 11% increase over the year before. (Canadian Honey Council)

#12. Including beekeepers who are not involved in honey-related activities, there may be as many as 125,000 individuals working with colonies in any given year. (Agricultural Marketing Resource Center)

#13. The average person in the United States will consume about 1.5 pounds of honey each year. (Agricultural Marketing Resource Center)

#14. The agricultural value of the bee industry within the United States is estimated to be over $20 billion. This is due to their pollination activities, which supports healthy crop growth. (Agricultural Marketing Resource Center)

#15. The bee industry separates production into three categories: hobbyist (25 colonies or fewer), part-time (up to 300 colonies), and commercial (300+ colonies). Commercial colonies represent 60% of the production for the industry. (Agricultural Marketing Resource Center)

#16. There are an estimated 1,600 commercial providers of bee-related products in the United States right now. (Agricultural Marketing Resource Center)

#18. For beekeeping operations in the hobbyist category, revenues generated by pollination in 2017 was $435 million. That was an increase of 29% over the year before. (U.S. Department of Agriculture)

#19. When wax, royal jelly, and other miscellaneous bee products are included, hobbyist beekeepers generated another $163 million for the industry, which reflects a 10% increase in miscellaneous revenues from the year before. (U.S. Department of Agriculture)

#20. Specialty honey in the United States has the highest average price, at $7.81 per pound in 2016. Extra-light amber honey, in comparison, averaged just $4.33 per pound at retail pricing. (U.S. Department of Agriculture)

#21. Honey bee operations in the United States spent more than $17.5 million on varroa control and treatment. Another $53.5 million was spent on colonies to provide feed assistance. (U.S. Department of Agriculture)

#22. Issues such as tracheal mites, cloudy wing, Kashmir, and Nosema resulted in another $5.9 million in costs for the industry. (U.S. Department of Agriculture)

#23. Beekeepers in the United States spend about $10 million each year on hives and wooden ware. (U.S. Department of Agriculture)

The bee industry has been steadily growing for more than a decade. Since 2010, the retail price for honey has risen by over 40%. Prices for other bee-related products have been higher as well. For the U.S.-based colonies, growth has been slow and steady. For international colonies, however, the growth rates have been 10% or higher in recent years.

With the growth of hobbyist colonies comes a data discrepancy. Providers with fewer than 5 colonies are not tracked by the U.S. Department of Agriculture. Although the production of honey was down more than 9% in 2017, the value of honey rose by more than 2% over the same period.

Although the opportunities within the bee industry are somewhat limited from a direct employment standpoint, the vital nature of this industry to the overall economy cannot be under-estimated. Numerous agriculture-based industries rely on bees to help with crop pollination. Because of this need, expect slow and steady growth to continue for the next 5-10 years.