A barber is an individual who generally cuts, dresses, styles, or grooms the hair of men or boys. Services at a barber shop may include a haircut, a shave, and similar services. In previous times, however, a barber was also responsible for performing dentistry and some types of surgery.

The services which a barber can provide depend upon the rules of their home community. In New Jersey, a cosmetologist and a barber are considered to be the same, which allows for the use of straight-razor shaving, hair coloring, and chemical-based work. In Maryland, a cosmetologist could do the chemical work, but not use a straight razor.

#1. Barber shops, when included with hair styling and haircut facilities in the United States, generate about $4 billion in total revenues. From 2012-2017, the industry grew at an annualized rate of 1.9%. (IBIS World) 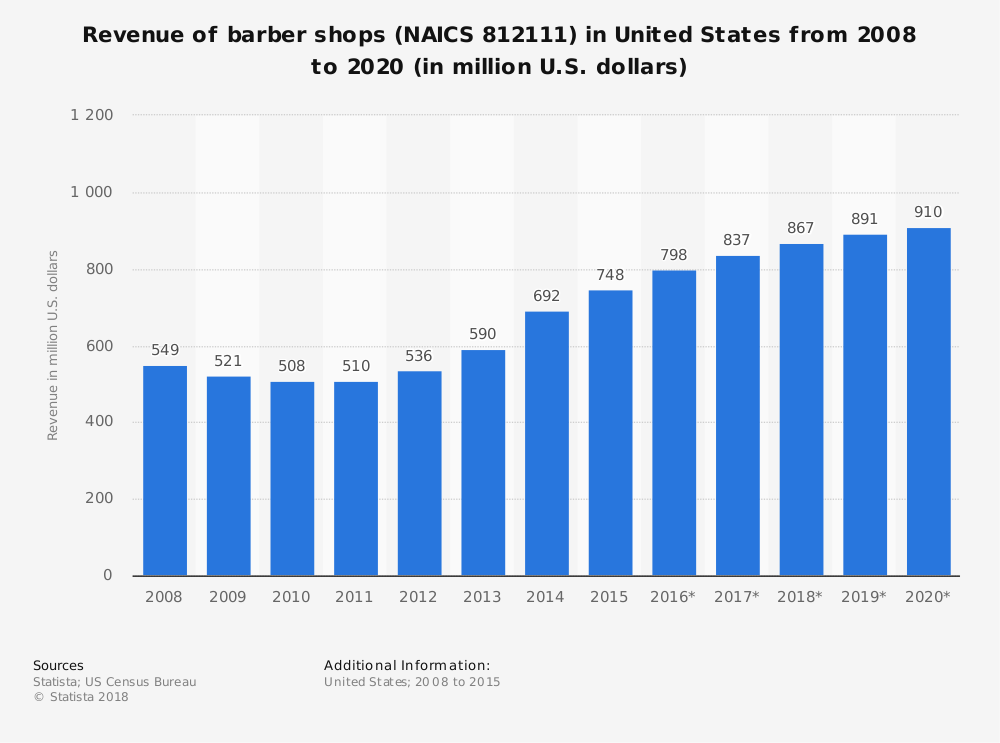 #5. 81% of men’s grooming product sales occur and brick-and-mortar locations within the barber shop industry. Only razors have been an e-commerce disruptor, with Dollar Shave Club recently selling to Unilever for $1 billion. (Forbes)

#13. Men say that they rely on the advice of their barber for their look about 46% of the time. Barbers say that their clients take their suggests about two-thirds of the time. (Modern Salon)

#14. 82% of men say it is their own opinion which matters the most when deciding which haircut they want or if it looks good. 63% of men also say that the opinion of their significant other matters to them. (Modern Salon)

#15. Only 1 out of 5 men who visit a barber shop ask for a coloring service for their hair. 88% of men say that they’ve never ordered a color blending service or had their hair colored to mask gray. (Modern Salon)

#16. Of the men who do receive hair coloring services, 43% of them say that they receive it with every appointment, or at least “most of the time.” (Modern Salon)

#18. 1 in 4 men say that they prefer having a male barber work on their hair. 43% of men say they don’t have a preference on who their barber happens to be, as long as they provide a good haircut. (Modern Salon)

#19. 56% of men say that the cost of their haircut is the most important factor when choosing a barbershop. This was followed by location convenience (44%), cleanliness (42%), value (39%), and professional expertise (33%). (Modern Salon)

#21. 71% of men stay loyal to their barber, with the average length of service with a single provider being longer than 7 years. (Modern Salon)

#22. 43% of barbers say that the best way to advertise their services is by using television ads. 19% prefer magazines, while 18% prefer newspapers or email respectively. (Modern Salon)

#23. 40% of men say that they are willing to experiment with their hair when visiting the barber, even if they have a standard haircut which they prefer. (Modern Salon)

Barber shops are currently bucking the trends of retail decline by offering new job opportunities in many communities. In 2016, the 1-year growth rate for employment within the industry was above 20%. Although the average salary of a barber is barely minimum wage in some areas of the United States, many shop owners sell retail products or provide supplemental services to add more money to their annual income.

Men are looking at barber shops in a different way. It is more than a place where you get a haircut and a shave. It’s a place to catch up on community news, to be seen, and to define what masculinity means on a personal level. Many barber shops have men who come in every 2-4 weeks with a standing appointment to receive services.

As the economy strengthens, the desire to feel good by looking good increases. That means there are new opportunities to explore in the barber shop industry. If another recession seems to be creeping up on the horizon, however, the declines within the industry could reach the same levels seen in the past couple of decades.