The surfing industry is some serious business. Although some surf-related brands have seen huge losses in their stock price over the last 10 years (Billabong has lost 97% of its value), more people than ever before say that they are part of the surfing industry. Women currently make up 36% of the surfing population. Surfing safaris to difficult beach locations have become a trendy vacation option.

What we can see is an industry that is not in trouble, but one that is evolving to change with the times. Instead of being centralized around a handful of specific brands, people are embracing a customized approach to the sport that they love.

#1. In the United States, about 1.73 million people go surfing at least once per year. They join a total population of surfers that is estimated to be about 23 million people. (Statistic Brain)

#2. The average annual revenue that is generated by the global surfing industry is about $7.3 billion each year. (Statistic Brain) 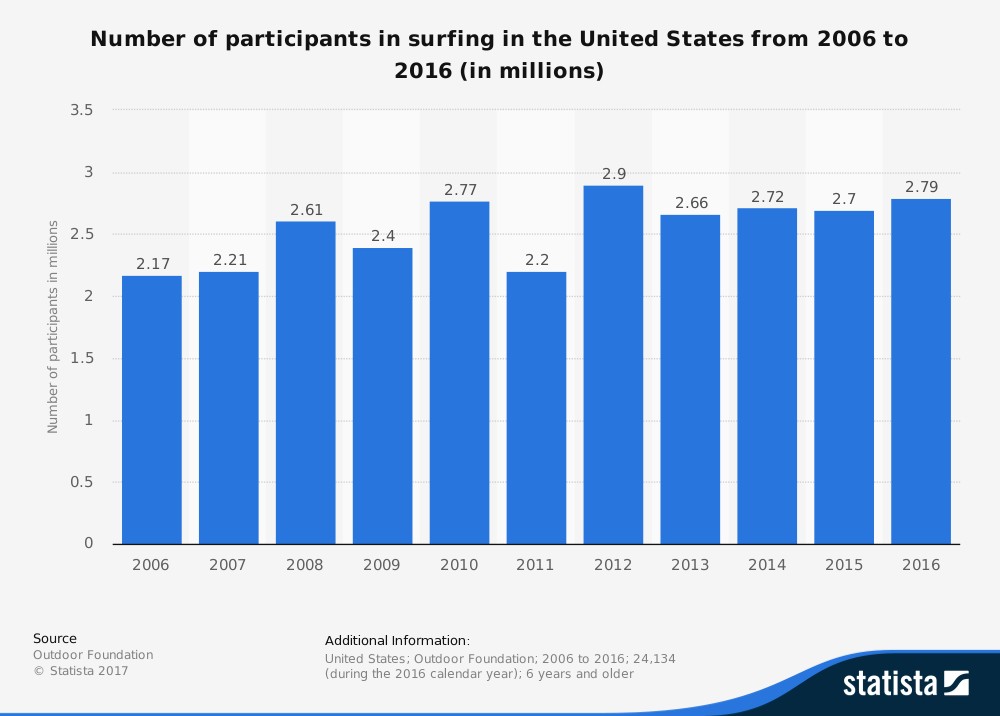 #3. The sale of hard goods is the largest segment of the surfing industry. Surfboards and accessories account for over $3.1 billion in annual sales. Footwear is the largest specific product segment in the industry, accounting for $1.6 billion in sales each year on its own. (Statistic Brain)

#4. One of the fastest growing segments in the surfing industry is for paddleboards. In the last year, it accounted for $18.5 million in sales, but has been steadily rising since 2005. (Statistic Brain)

#5. The global market for the surfing industry is projected to reach total sales of $9.5 billion by 2022. Australia is forecast to lead this increase with a projected CAGR of 5.5%. (Global Industry Analysis)

#6. The United States has the largest share of the surfing industry from a global perspective, accounting for 49% of total sales in the average year. (Global Industry Analysis)

#8. The overall popularity of surfing may be declining, even though the value of the industry is increasing. Google reports a 64% decrease in searches for surfing from 2004-2014. (Medium)

#10. The average surfer in the United States earns about $75,000 per year. With popularity rising in Korea, China, and Europe, the global forecasts for sales could reach as high as $13 billion. (Fortune) 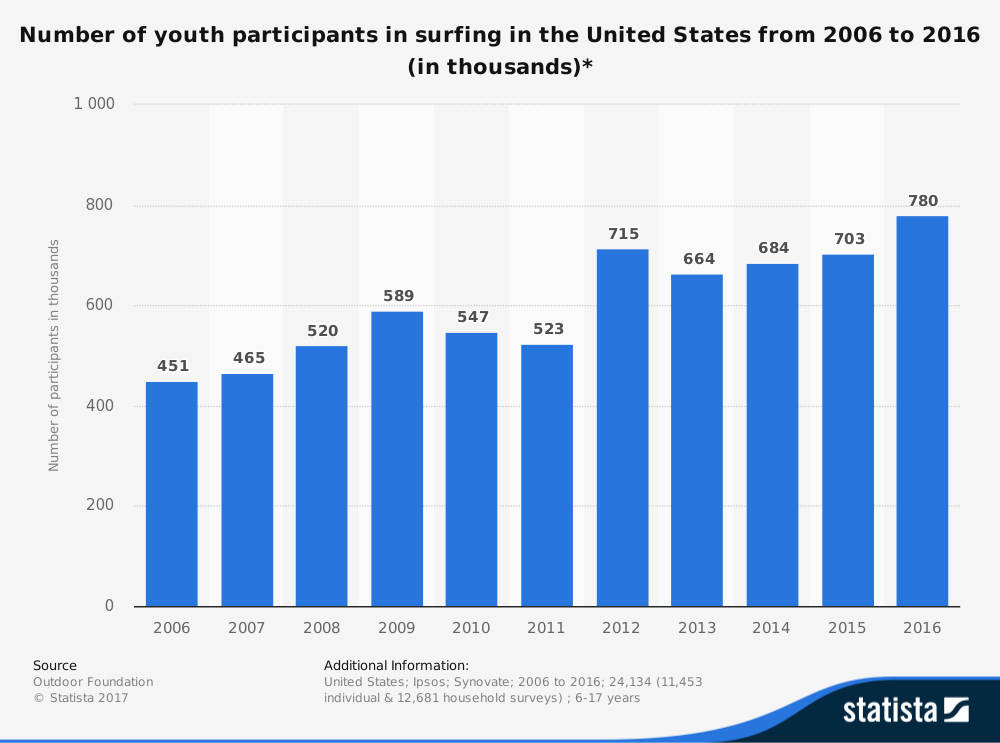 #11. Locations with consistently good waves bring in high levels of economic activity from surfers. In Half Moon Bay, CA, about 420,000 people visit to enjoy the waves and spend an average of over $55 per person during their stay. The Trestles in San Diego, CA have an economic valuation of $24 million. In Rincon, CA, the waves generate an estimated $52 million in economic activities.

#12. In a survey about surfing in the United Kingdom, surfers were disproportionally represented in managerial, professional, or business-owning employment classes. Nearly 80% of surfers fit into these employment categories, compared to just 54% of the general population. (Surfers Against Sewage)

#14. In the United States, the average surfer is 34 years old and will drive about 10 miles to go surfing. Every surfing session results in spending about $40. (Surf Park Central)

#16. The average surfer in the United States owns 4 different boards and will spend about 2.5 hours surfing during each local session. (Surf Park Central)

#17. The average surfer in the U.S. has 16 years of surfing experience and will generate a total of 108 surfing sessions per year. (Surf Park Central)

#18. Many surfers also participate in other outdoor activities during their surfing trip. These may include fishing, boating, or wildlife viewing. With the exception of 2012, more people than ever before say that they participate in this sport right now. (Statistia)

#19. The average price of a surfboard can be anywhere between $700 to $1,300 for a good board. Longboards tend to have the higher prices. Shortboards average a price of $400 to $800, depending upon the quality of the manufacturer. Paddleboards tend to be priced in the same range as shortboards. Skimboards are one of the cheapest options, with high-quality boards priced for $200 or less. (Surf Bait)

#20. The average price for manufacturing a surfboard is about 25% of what the final retail price happens to be. (Stab Magazine) 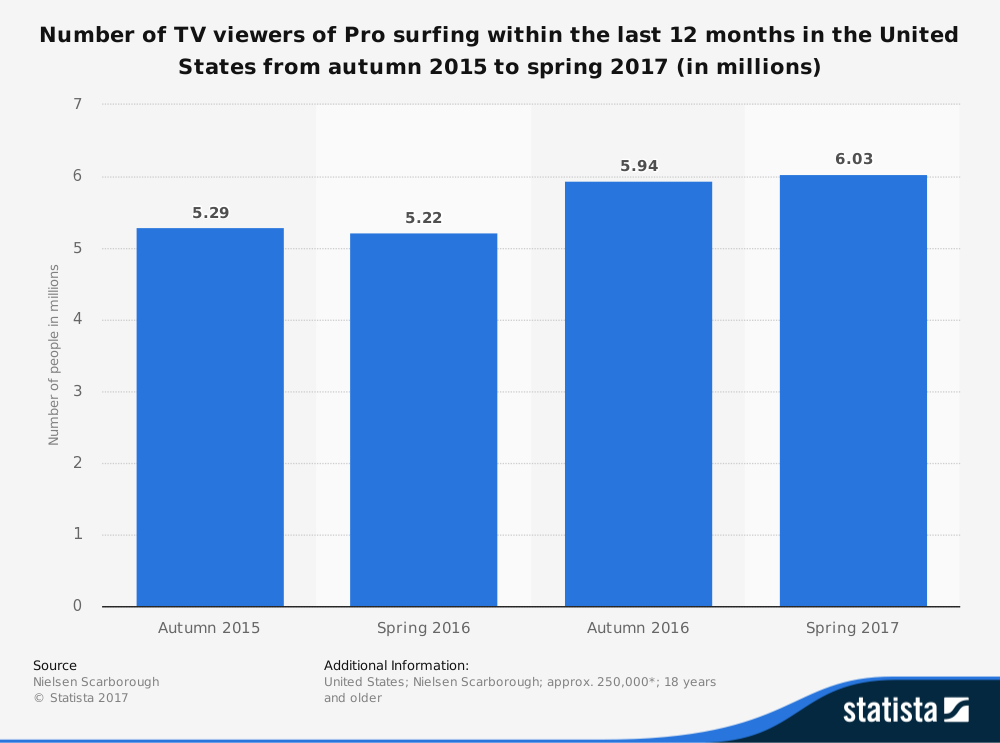 #21. In the United States, surfers in Hawaii tend to be the oldest, the most experienced, and the most avid. They surf an average of 144 days per year. (Surf Rider)

#22. Although surfing takes place in every coastal region in the U.S. where waves are available, the six most popular states for surfing are California, Hawaii, Florida, North Carolina, New Jersey, and Texas. Cold weather Pacific surfing, in states like Oregon and Washington, is less popular than cold weather Atlantic surfing in Maine. (Surf Rider)

The surfing industry will likely experience more growing pains over the coming years. Brands that are unable to adapt to the preferences of customization will continue to struggle generating revenues. Look for small, family-owned businesses to dominate on the local levels. Growth comes not from brand loyalty, but from an ability to provide the best possible surfing experience.

Continued innovations within the industry, from skimboards to paddleboards, will help to foster additional growth as well.

Although there are some challenges that must be addressed, the industry looks to remain healthy for years to come. As long as there are waves to be found, there will be surfers to ride them. That means there will be a need to have an industry support this sport as well.