When we think of the “Great Space Race,” images of the competition between the Soviet Union and the United States in the 1950s comes to mind. We think of names like Sputnik or Neil Armstrong. What does not usually come to mind is the Aggregat 4, which was produced by the German aerospace industry in the 1940s.

Now granted, the A4, which was given a name that translates into English as “Retribution Weapon 2,” was originally built by the Nazi government to attack Allied cities during World War II. It would also be the first long-range, guided ballistic missile which could reach outer space. Many of the rocket technologies that developed for the Great Space Race came from captured components or inherited facilities after the conclusion of the war.

Today, the German aerospace industry may not dominate in global manufacturing, but it does produce parts and components that are used all over the world. Part of the reason for this was the fact that Germany was forbidden to manufacture aircraft in the years after World War II.

#1. More than 1,700 passenger aircraft were manufactured globally in 2016. Companies from the German aerospace industry were involved in the manufacturing of every single aircraft produced. That means German technologies are found in all operational passenger aircraft built today. (German Trade and Invest)

#2. About 300 aircraft are finished by the German aerospace industry domestically each year. That equates to about 17% of the global production of new aircraft. (German Trade and Invest) 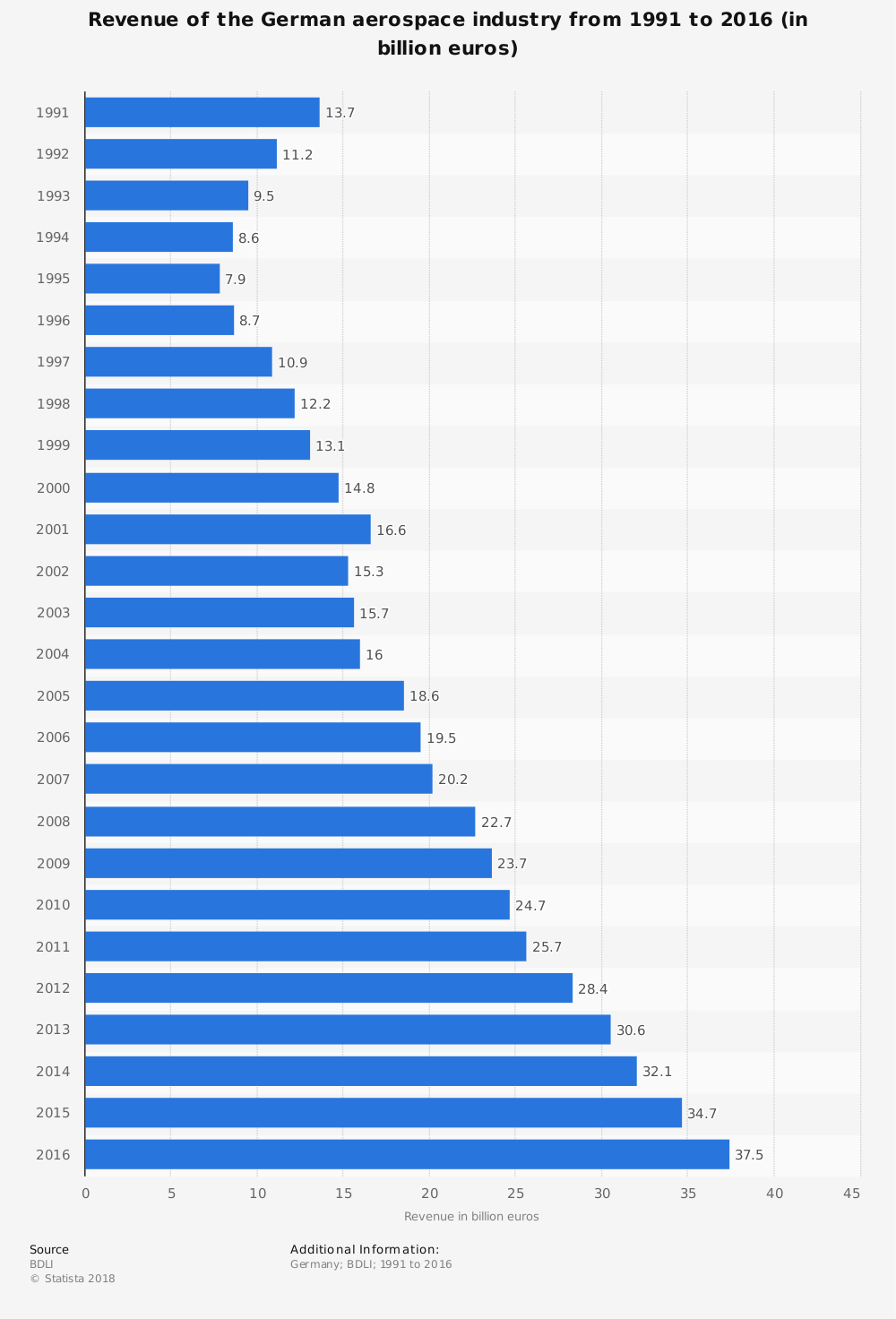 #3. Over the next 20 years, the demand of new passenger aircraft is expected to reach as high as 35,000 aircraft. That does not include any military aircraft production that may be required by the industry. (German Trade and Invest)

#4. More than 108,000 people have direct employment opportunities because of the German aerospace industry. Employment levels have risen consistently since 1995, when just 68,000 people were employed by the industry. (German Trade and Invest)

#5. Another 900,000 indirect employment opportunities are generated by the German aerospace industry each year. (International Trade Administration)

#6. More than 50% of the direct employment opportunities offered by the German aerospace industry are either engineers or high-skill positions. (German Trade and Invest)

#8. The total value of industry revenues generated by the industry in 2016 were EUR 37 billion. About 11% of the industry turnover, or EUR 4 billion, is spent on research and development. (German Trade and Invest)

#9. There are currently 137 German aviation companies that have been granted operating licenses as of 2015. (Statista)

#10. Civil aviation revenues account for 73% of the overall market for the German aerospace industry. (Statista) 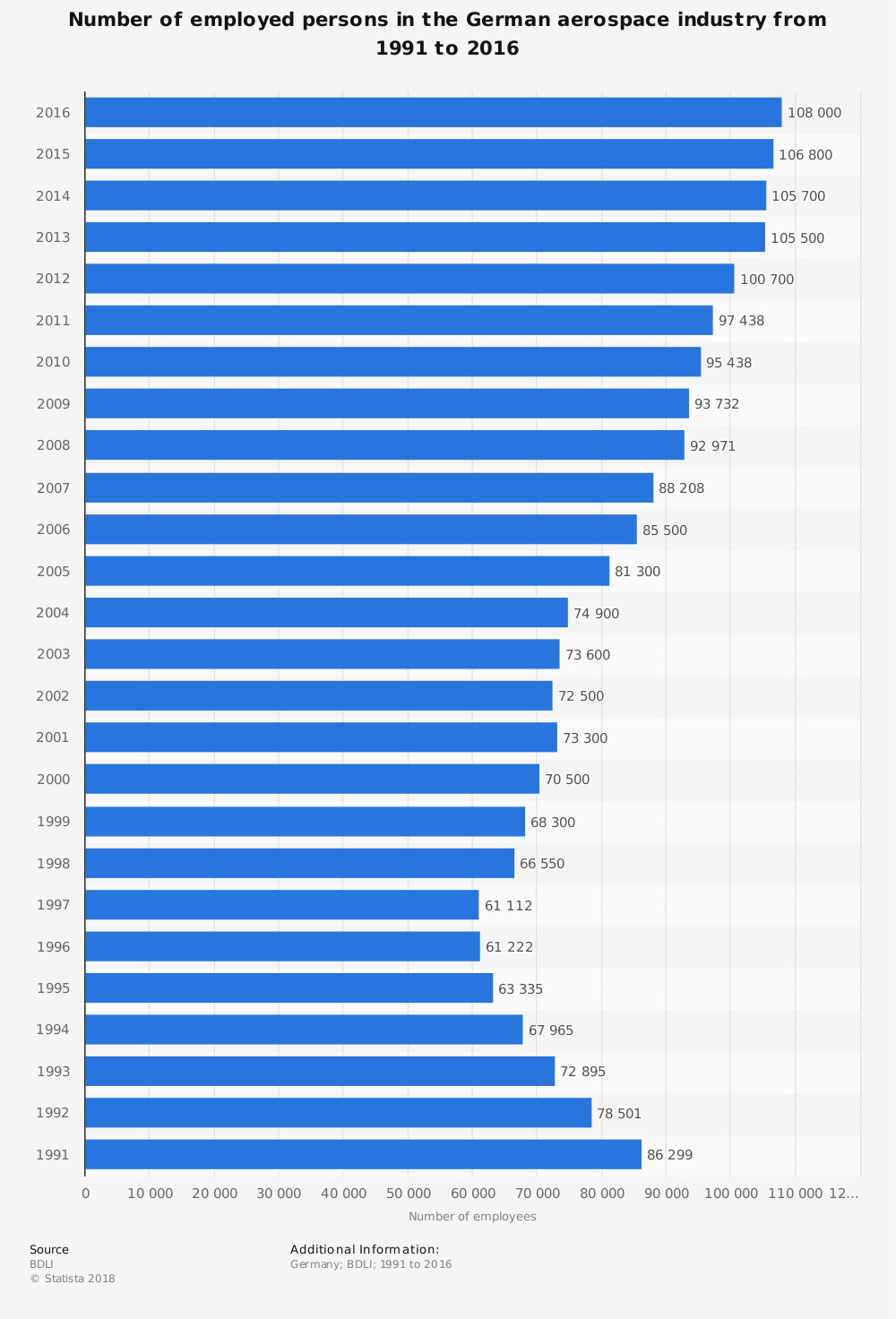 #11. Aerospace systems account for the largest share of the market in Germany, bringing in 60% of industry revenues annually. (International Trade Administration)

#12. Imports from the United States to the German industry reached a total of $3.18 billion in 2012, which was 40% higher than the year before. Germany is the largest importer of goods from the U.S.-based aerospace industry. (International Trade Administration)

#13. From a passenger traffic standpoint, there are 38 airports that service commercial flights in Germany. On average, they support about 15 million passengers per month. (International Trade Administration)

#14. Aircraft passenger traffic in Germany has been contracting at a rate of 3.6% annually, while in Europe, overall traffic has grown by 2.5% annually. (International Trade Administration)

#15. The majority of the German aerospace industry is based in Bayern, Niedersachsen, or NRW, accounting for 445, 338, and 276 firms respectively. (Federal Ministry for Economic Affairs and Energy)

#16. 76% of the firms that are operating within the German aerospace industry report annual revenues that are EUR 10 million or less annually. Over 90% of these firms employ fewer than 250 people. (Federal Ministry for Economic Affairs and Energy)

#17. Airbus is the primary customer for a majority of the firms operating within the German aerospace industry. More than EUR 140 million in revenues come directly from Airbus each year for the industry. (Federal Ministry for Economic Affairs and Energy)

#18. German exports from the aerospace industry are primarily focused on the United States. Industry firms are twice as likely to work with U.S. entities compared to their second-largest export market, which happens to be France. (Federal Ministry for Economic Affairs and Energy)

#19. The German aerospace industry is part of a $175 billion civil and $204 billion military industry from a global perspective. (World Economic Forum) 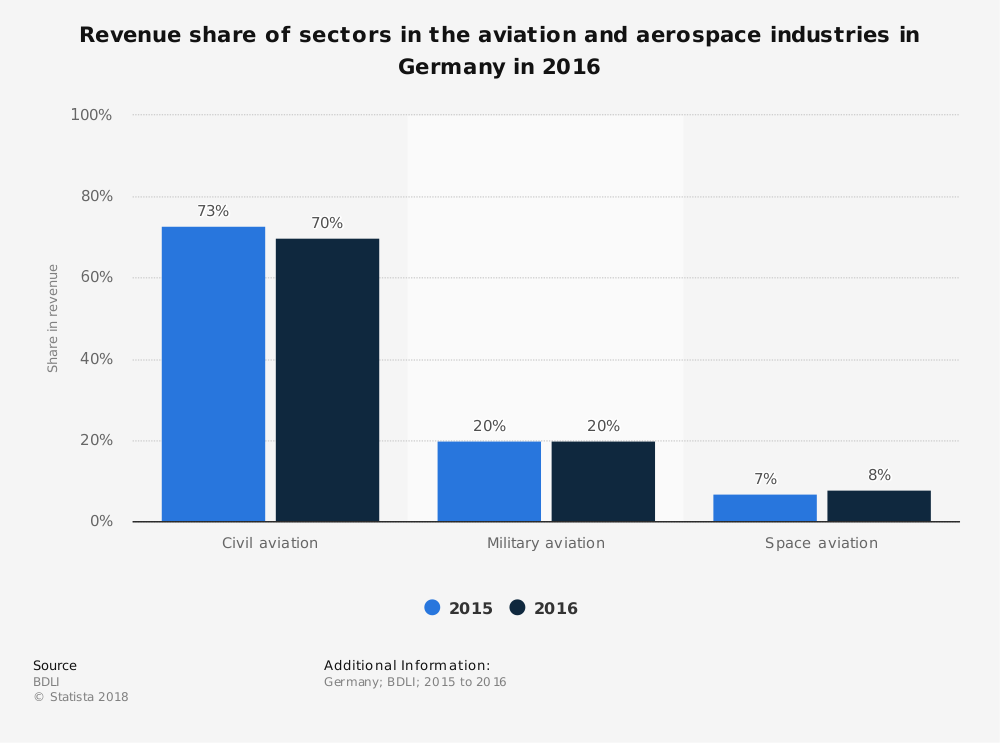 #22. Final assembly and OEM activities provide 40% of the output for Airbus fixed-wing aircraft and 42% of Eurocopter rotorcraft deliveries. In 2008, the industry delivered 245 helicopters and 187 A320 Airbus aircraft. (ECORYS)

For the past 20 years, the German aerospace industry has experienced levels of success at an unprecedented rate. Since the 1990s, industry revenues have risen by more than 4 times, making it one of Europe’s most innovative sectors. As advances in aerospace technology continue to encourage innovation within this industry, it is expected to continue being one of the best-performing industries in Germany and Europe for the next 20 years.

What drives the German aerospace industry forward is an emphasis on is research and development infrastructure. International investors pump money into this industry because it can directly transition from R&D to manufacturing because of the power of its base. That gives the industry more profit potential than competitive industries in the United States, France, and Canada.

The only thing that will hold back this industry from achieving phenomenal growth are internal issues. Global air traffic is expected to continue expanding by 5% each year. With the advantages of this industry in play, expected German innovation to be found in all corners of the globe in coming years.