The history of elevators is one that is surprisingly long. Basic elevators were known to be used by the Romans as far back as the 4th century BC. Early elevators were usually open cars or platforms, with manual hoists that would lift building materials, move water, or transport heavy items.

As for passenger elevators, the first examples were created in the 18th century. King Louis XV had an elevator installed that would carry him between his apartment and the apartment of his mistress. By the end of the 19th century, hydraulics and electricity were incorporated into modern elevator designs and the birth of the modern industry occurred.

Interestingly enough, two fellows with Otis in their names are responsible for the modern infrastructure of the elevator industry. Otis Tufts patented an elevator design which included automatic doors and a threaded screw system of elevation, eliminating the cables that Elisha Otis’ system incorporated.

#2. In the United States, there are just over 19,000 firms that are currently engaged in the elevator installation and service category. These firms are responsible for the direct employment of about 107,000 people each year. (IBIS World) 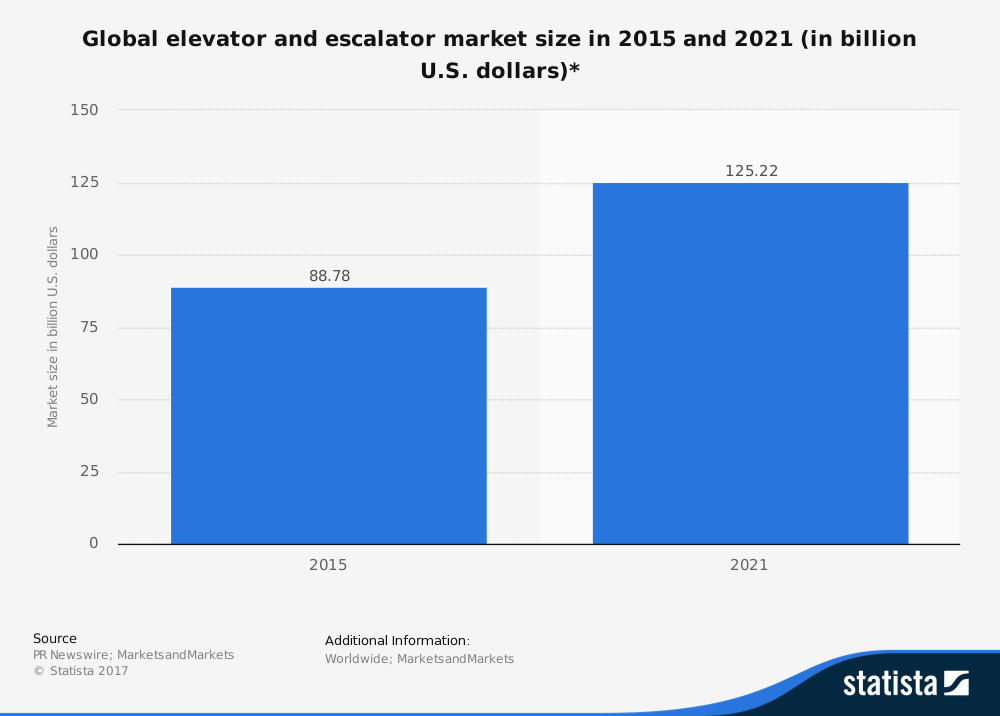 #3. For the 5-year period ending in 2017, the U.S.-based elevator industry achieved a 2.7% annual growth rate. Revenues generated by the industry came to about $22 billion, or 25% of the global elevator industry. (IBIS World)

#4. More than 1.1 million units are expected to be ordered for new installations through the year 2022 as the industry transforms to smart elevator designs. An increased number of tall buildings, when combined with domestic economic recoveries, are expected to fuel this increase as well. (Global Industry Analysts)

#5. China and India represent the two largest markets for the international elevator industry today. On its own, China accounts for more than half of the high-rise building projects that have the need for a new elevator installation. (Global Industry Analysts)

#6. The Middle East is another growing market for the industry. Just one tower, in Jeddah, is expected to incorporate 65 new units for the industry on its own. (Global Industry Analysts)

#7. In the United States, the average wage of elevator installers or repairers can range from just under $40,000, primarily in the Southern States, to upwards of $120,000 along the East and West Coasts. (Elevator World)

#8. The hourly rate of an elevator professional in San Francisco is $61.86. In Richmond, Virginia, a worker with the same skill levels will earn an average of $37.61 per hour. (Elevator World)

#9. The employment of elevator installers or maintenance personnel is expected to grow by 13% through 2024, which is father than the average for occupations in the United States. (Elevator World)

#10. Hydraulic elevators have an average cost of up to $30,000 for the elevator itself. The installation costs of an elevator are about equal to the manufacturing cost of the product. Pneumatic elevators are slightly easier to install, which can drop the average total price of a residential installation to about $35,000. (Fixr) 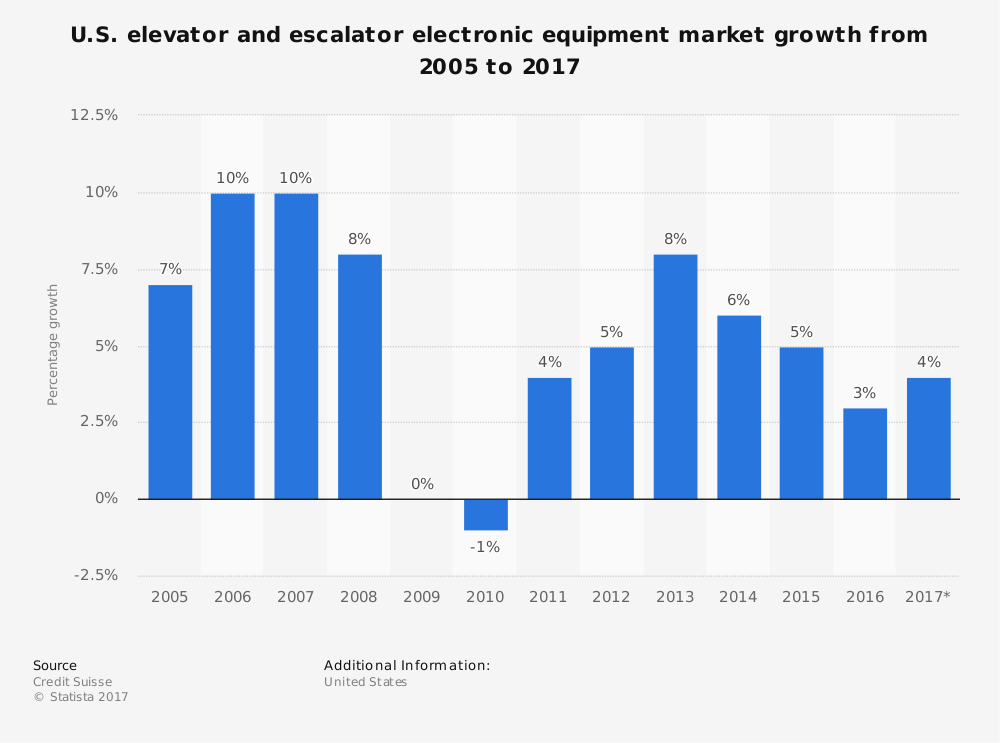 #11. With an estimated 1.1 million elevators in service in the United States right now, there is about 1 elevator for every 300 people in the country. (National Elevator Industry Inc.)

#12. The average elevator offers passenger services that offer 40 feet of upward or downward movement. In the average building, that translates to about 4 or 5 floors per person. (National Elevator Industry Inc.)

#13. The average elevator takes 5 people per trip when it is in use. Each person who uses an elevator will average 4 trips per day. (National Elevator Industry Inc.)

#14. Newly installed elevators are expected to carry about 20,000 people per year. In the United States, that means the elevator industry supports 18 billion passenger trips every year. (National Elevator Industry Inc.)

#15. There are another 44,000 escalators installed in North America that are serviced by the elevator industry. The average number of people supported by a moving stairway, once installed, is about 3,000 people per hour. (National Elevator Industry Inc.)

#16. The elevator industry in North America also supports about 3 million escalator trips that are taken by passengers, per unit, each year. That equates to over 100 billion passenger uses in a 12-month period. (National Elevator Industry Inc.)

#17. In the United States, the elevator industry experiences an average of 14 deaths per year related to work that occurs on or near the equipment. 49% of the reported on-the-job fatalities which occur in the industry are caused by a fall down an elevator shaft. (Electronic Library of Construction Occupational Safety and Health)

#18. From 1992-2003, there were 244 total deaths reported regarding work around escalators and elevators. 68 of the reports involve people who enter or ride in elevators while they are at work. (Electronic Library of Construction Occupational Safety and Health)

#19. The District of Columbia sees the most non-work-related fatality incidents involving elevators over the course of a decade. About 25% of the incidents that were reported, 56 in total, involved children 10 years of age or younger. (Electronic Library of Construction Occupational Safety and Health)

#20. In 1994, the Consumer Product Safety Commission estimated that there were 9,800 elevator injuries and 7,300 escalator injuries that required hospitalization. 3 out of 4 hospitalized injuries occurred because of a fall. (Electronic Library of Construction Occupational Safety and Health) 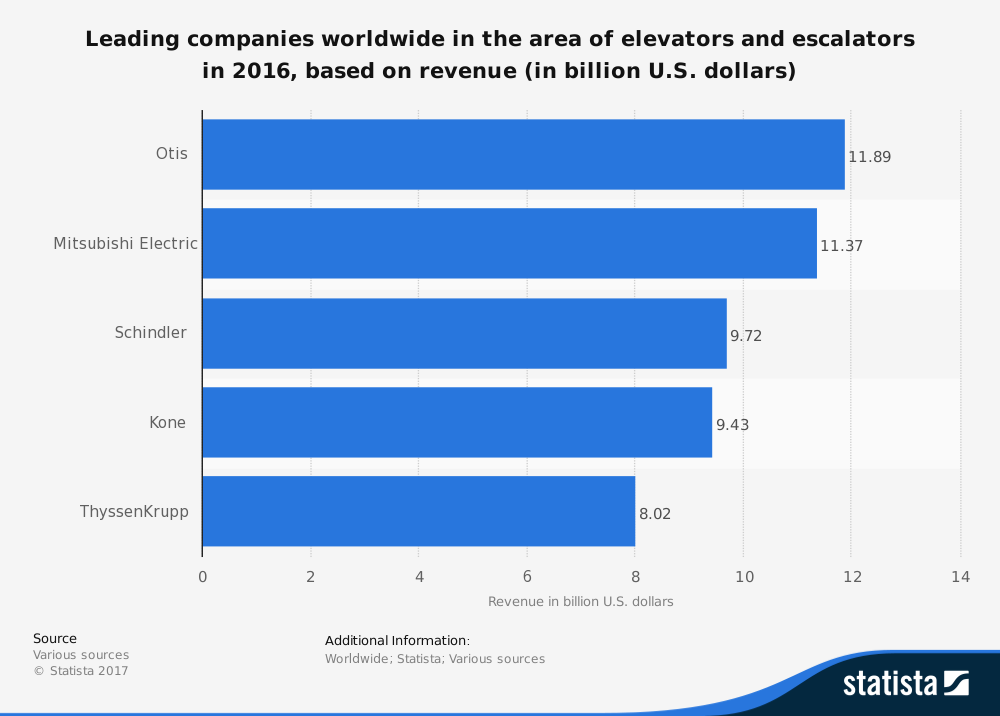 #21. About half of sidewall entrapment injuries that occur with industry products happen to children under the age of 5. The most common cause of injury occurred because of a trapped shoelace or the child’s hands. (Electronic Library of Construction Occupational Safety and Health)

#22. An estimated 6,000 hospital emergency room injuries are treated because of escalator interactions each year. (Electronic Library of Construction Occupational Safety and Health)

As long as there are tall buildings being constructed, there will be a need for new elevators to be installed. Residential expansion to support homeowners with disabilities will also be an important segment for the industry, especially if the mature markets in the United States and Europe continue to see growth.

Internationally, strong economies are fueling the desire to build tall, expansive buildings. Numerous projects include 10+ new units to be installed.

With moving staircases and walkways included within this industry, there is a strong potential for growth in the upcoming 5-year and 10-year forecast periods. Although some projects may see delays or cancellations due to unexpected changes to the economy, the consistency this industry is likely to see makes it an inviting haven for investors looking to diversify their portfolio.