Biodiesel is a substitute fuel for regular diesel fuel. It can be created using vegetable oils or animal fats that consist of long-chain alkyl esters. In the United States, the mixture of feedstocks for biodiesel usually includes recycled cooking oils as well.

Although some engines are designed to run completely on biodiesel, it is usually presented to the market as part of a blended fuel package. Most diesel fueling stations offer a mix that is at least 5% biodiesel. In some locations, the blend levels may be as high as 20%.

Modern biodiesel fuels meet strict standards for engine performance, safety, and fuel quality. Modern engines can use biodiesel without a modification or warranty voidance. With its many benefits, it is easy to see why the industry statistics, trends, and analysis are so important today.

#1. The United States produces about 148 million gallons of biodiesel per month. Most of the production occurs in the Midwestern states, where two-thirds of U.S. production take place. (U.S. Energy Information Administration)

#2. There are currently 200 biodiesel plants located in the United States. Total production from these plants is about $2.4 billion gallons of fuel annually. (U.S. Energy Information Administration / National Biodiesel Board) 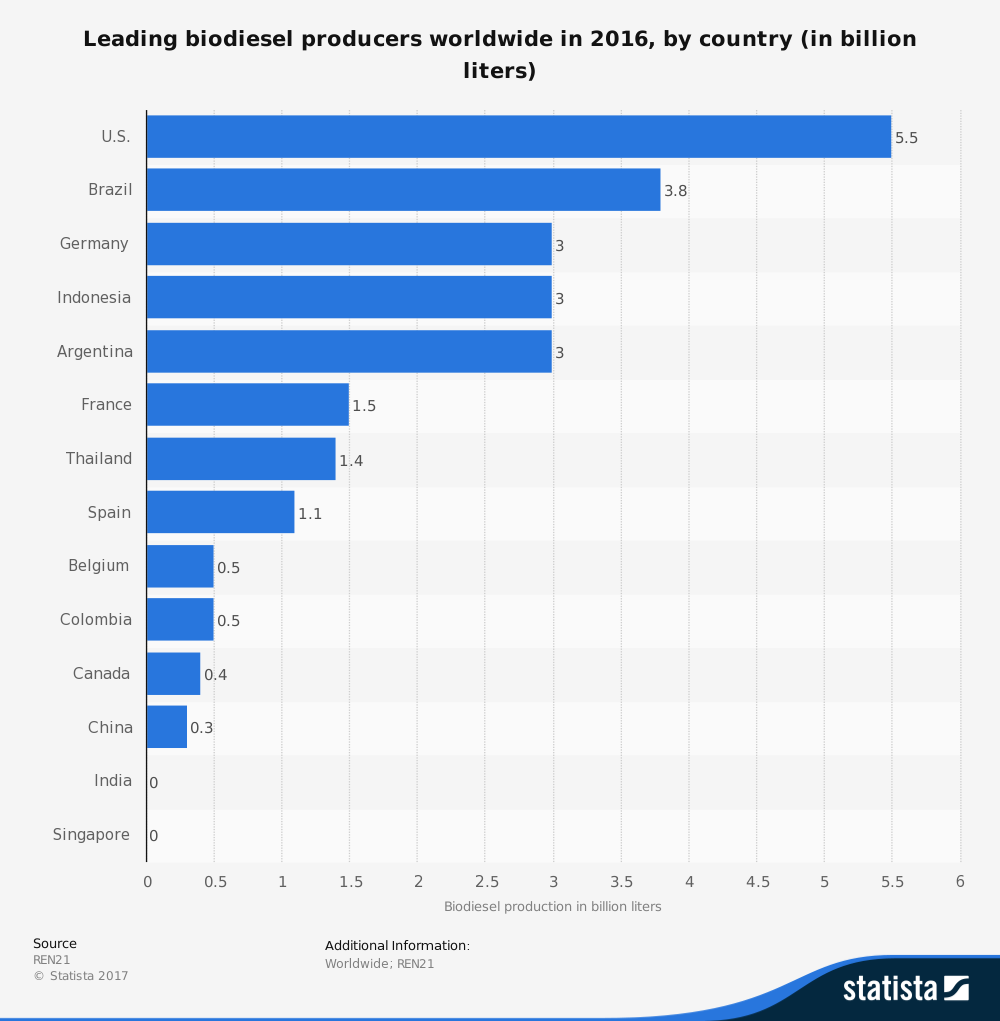 #3. To produce that much fuel, the U.S. biodiesel industry uses 1.14 billion pounds of feedstocks. Soybeans are the most common feedstocks used, accounting for 591 million pounds of the total biodiesel stock. (U.S. Energy Information Administration)

#4. Only four states have 9 or more producers of biodiesel in the U.S. They are Iowa, Missouri, Texas, and California. Illinois has 5-8 active producers at any given time. (U.S. Energy Information Administration)

#5. The current on-road diesel market in the United States may be as high as 40 billion gallons of fuel annually. (National Biodiesel Board)

#6. In the early 2000s, when biodiesel was first introduced, the industry could only produce about 25 million gallons of fuel annually, or about 1% of the total diesel demand. (National Biodiesel Board)

#7. There are an estimated 64,000 jobs that are created through the biodiesel industry in the United States. (National Biodiesel Board)

#8. Biodiesel use reduces the levels of greenhouse gas emissions from the U.S. transportation network by a minimum of 57%. When biodiesel is compared to petroleum diesel, the savings rises to 86%. (National Biodiesel Board)

#9. Global biofuels rose in production by 2.6% in 2016. That was faster than the growth seen in 2015 of just 0.4%, but below the decade-growth pattern of 14.1% annual growth. The United States is the world’s largest producer of biofuels. (BP Global) 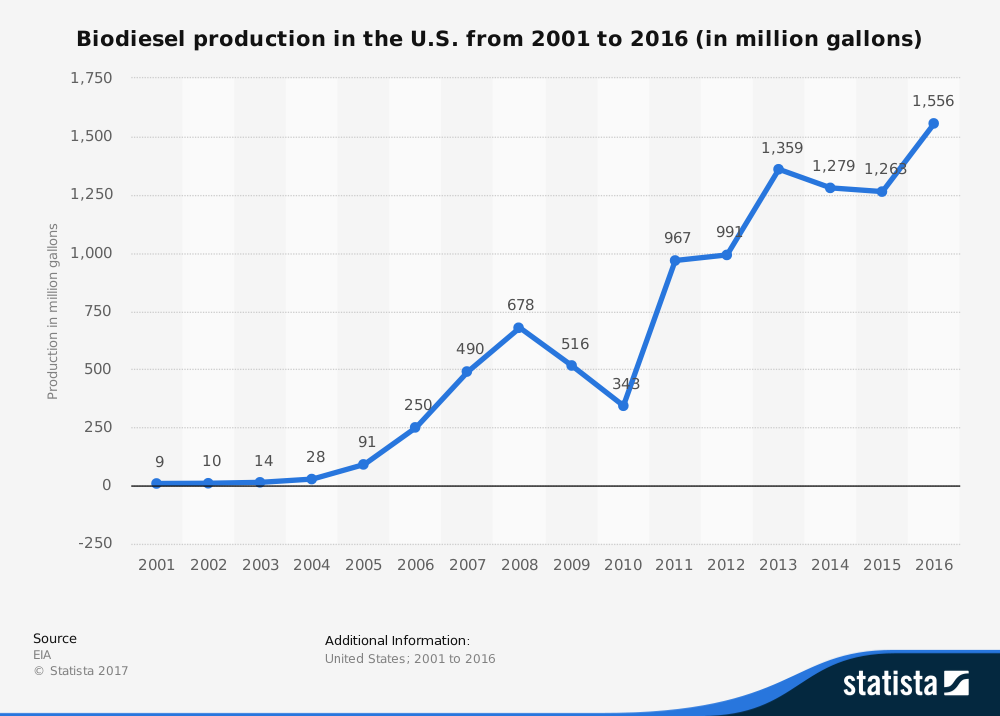 #11. The biodiesel industry in the United States used over 6 billion pounds of soybean oil in 2016, an increase of 24% from feedstock figures of the year before. (Agricultural Marketing Resource Center)

#12. In the United States, the biodiesel industry uses about 28% of the total number of soybeans that are produced annually on croplands. (Agricultural Marketing Resource Center)

#13. The biodiesel industry uses a higher percentage of corn products grown in the U.S. more than any other crop. Although the industry used just 1.6 billion tons, that accounted for 41% of the total corn growth market in 2016. (Agricultural Marketing Resource Center)

#14. Several different greases are used to make biodiesel as well. Yellow grease is the most popular, with 1.38 billion pounds being used in 2016. White grease use was 578 million pounds. Tallow and poultry fat were also used, at 332 million pounds and 220 million pounds respectively. (Agricultural Marketing Resource Center)

#15. Since 2015, the levels of white grease and tallow have decreased by 10%, while poultry fat and yellow grease have increased by about 10%. (Agricultural Marketing Resource Center)

#17. Germany, China, Argentina, and France all produce more than 50,000 barrels of biofuels annually, which puts them all in the top 10 of producers in the world today. (World Economic Forum)

#18. Biodiesel is one of the top alternative fuels in the world today. Germany is one of the world’s top consumers of this fuel. It has a 3% market share of the German diesel market. (Our Energy)

#19. Biodiesel is the only alternative fuel in the United States that has passed the testing requirements that are part of 1990’s Clean Air Act. (Our Energy)

#20. The energy content of biodiesel is about 90% of what petroleum diesel is able to produce. (Biofuel.org.uk)

#22. Biodiesel has 3.2 units of back energy, making it one of the highest energy balances for transportation fuels that is used in the world today. (Renewable Green Energy Power)

The biodiesel industry has struggled to see the impressive growth levels of the early 2010s, but the future of the industry is not in question. The world is moving toward fuels that offer a more sustainable approach. Because of the strict quality standards that the biodiesel industry demands, transitioning to this fuel is easier, safer, and cheaper than converting other biofuels for use.

Demands for biofuels may have peaked between 2015-2017, but transportation networks have become more active once again. The shipping industries are putting more miles onto roadways. It is only a matter of time before an even higher demand for biodiesel is expected.

What will help the industry, especially in the United States, is a renewal of the biodiesel blenders tax credit. Renewable volume obligations through the Renewable Fuel Standard must also be implemented. Even if they are not, however, the industry itself is expected to remain strong indefinitely.