Domestically-sold coal in Alberta is usually in its raw form and comes from the plains. Coal that is destined for international markets is usually processed first, turning it into a clean coal product. Thermal coal is used to create electricity, while coking coal is destined to help produce steal.

About half of the raw thermal coal and 65% of the coking coal is recovered for market use on the average year.

After 10 years of consistency, the coal industry worldwide has seen a downturn in popularity as countries look for cleaner, renewable energy options. That downturn has directly affected the Alberta coal industry and even halted the production of some mines.

#1. From 2004-2014, Canadian mines produced a consistent average of 69 million tons of coal per year. In no year during that period did the levels of production dip below 67 million tons. (CBC News)

#2. Coal production in Canada peaked in 1997. During that production year, Canadian mines were able to produce 78 million tons of coal. (CBC News) 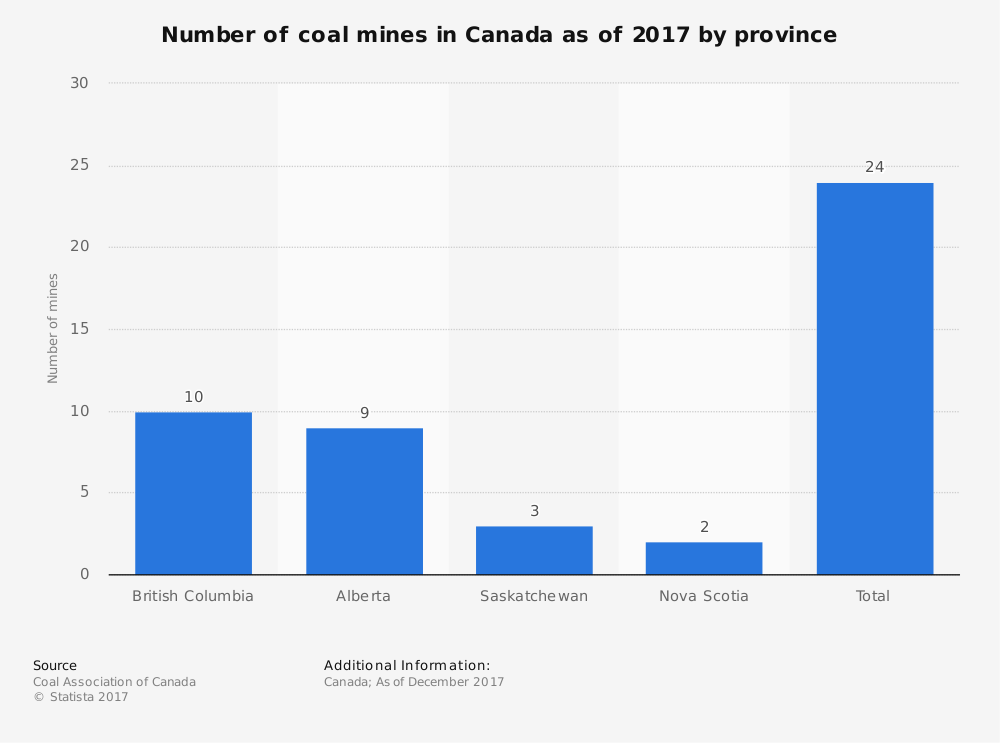 #5. The total levels off coal consumption in Canada have decreased by 42% since 2005. In that year, Canada used 60 million tons of coal, with 52 million used for power generation. (CBC News)

#6. 55% of the electricity that was used in Alberta in 2014 came from domestic coal. The province currently has 18 power plants using coal technologies that generate power for the province. (CBC News)

#7. In 2014, Alberta produced a total of 33.8 million tons of coal. That represented 49% of the total industry numbers for Canada in that year. (CBC News)

#8. In 2016, the global coal industry produced about 7.3 billion tons of coal. Canada ranked 12th on the list of world production, producing about 1% of the overall total. China and the United States are the global leaders, combining for 55% of the total coal production seen in 2016. (Natural Resources Canada)

#9. Canada was ranked as the 8th leading exporter of coal globally in 2016, providing a total of 2% of all global coal exports. Australia is the world’s leading coal exporter, accounting for 29% of the export market. (Natural Resources Canada)

#10. Estimates place the total Canadian production of coal in 2016 at 61 million tons. If those numbers are finalized, it would reflect a downturn of production within the industry of about 10%. 37 million tons was used for electricity generation that year, mostly in Saskatchewan and Alberta. (Natural Resources Canada) 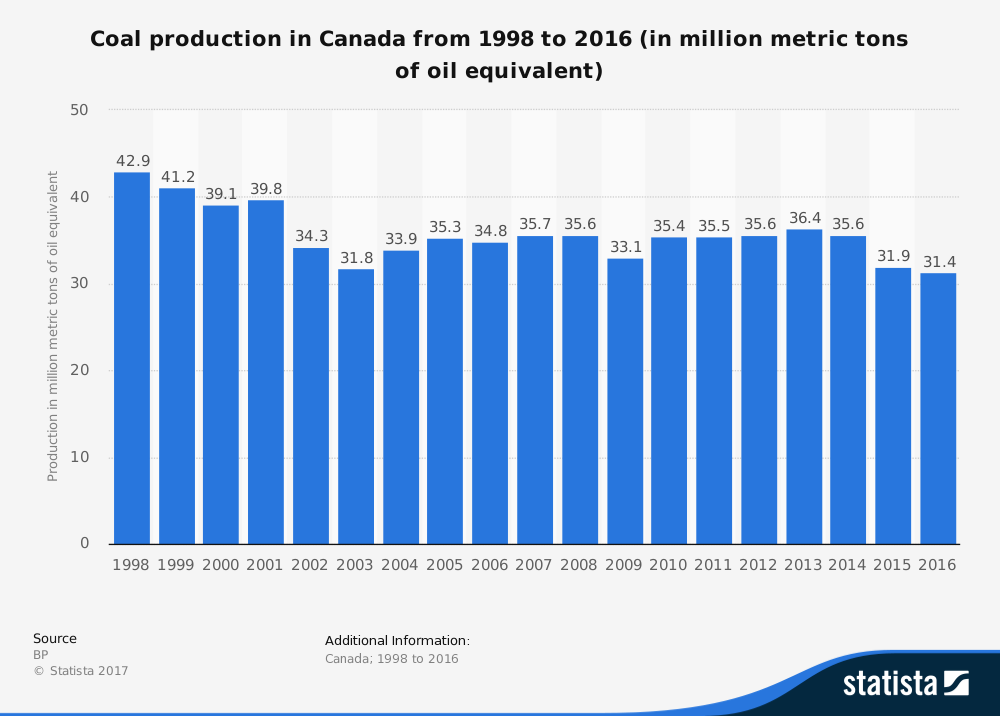 #11. In 2016, about 6 million tons of coal were imported into Canada. 76% of those imports originated from the United States. Imported coal is split 50/50 between thermal coal and coking coal. (Natural Resources Canada)

#12. About 10% of Canada’s electricity is generated by using coal. (Natural Resources Canada)

#13. Alberta has 9 mines that are actively producing coal right now. Seven of them are thermal mines, while the other two are coking coal mines. (Coal Association of Canada)

#14. Over 75% of the mined lands in Alberta that produced coal have already been reclaimed in some way. (Coal Association of Canada)

#15. About 7,000 people are employed through the Alberta coal industry, with most of them employed in the most rural areas of the province. (Coal Association of Canada)

#16. Between 2010-2014, the government of Alberta was able to receive over C$90 million in royalties from companies within the coal industry. This money was used to support services and programs established by the government to help the general population. (Coal Association of Canada)

#17. The demands for thermal coal are expected to double within the next 20 years. The demand for coking coal in Alberta is expected to rise by 50%. (Coal Association of Canada)

#18. New thermal coal export projects are expected to provide revenues of over C$200 million in the coming years for the provincial government and create at least 500 jobs in the first phase of the project. (Coal Association of Canada)

#19. Several companies within the Alberta coal industry are currently active along the Eastern Slopes of Alberta to find new mining opportunities. Over 15,000 workers could find employment because of these efforts, with total revenues reaching an estimated $13 billion. (Coal Association of Canada)

#20. The total coal industry in Canada is valued at C$5 billion annually. Alberta’s share of that production is consistently around 45% of the total industry. (Coal Association of Canada) 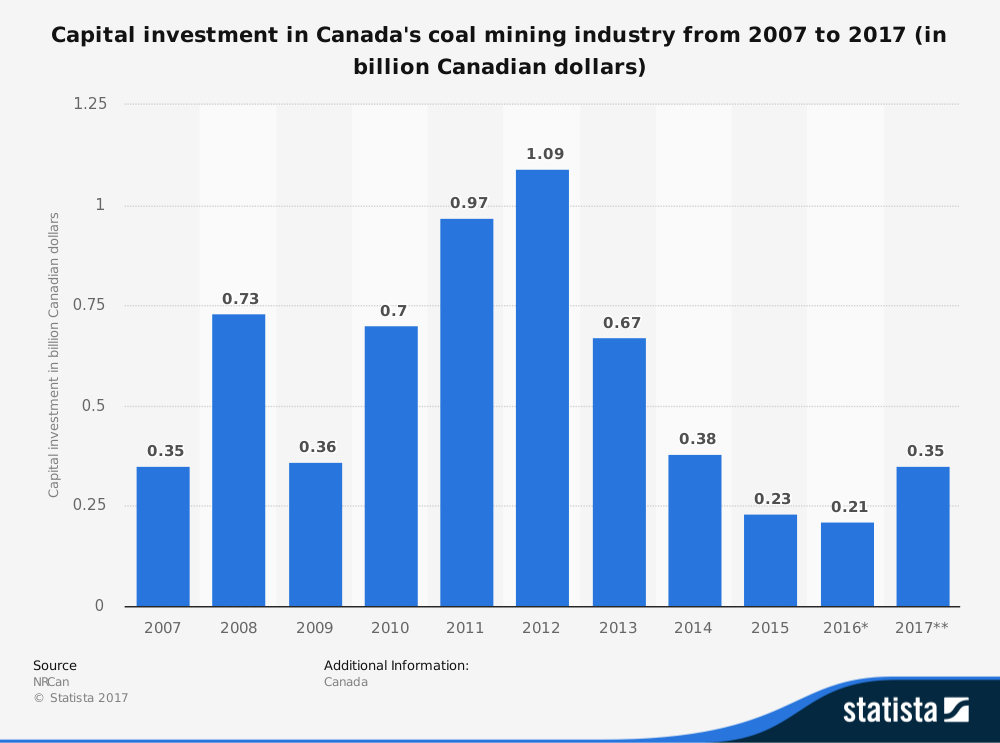 #21. Salaries from the coal industry average more than double what the average national wage happens to be in any given year. From 2001-2010, the value of the industry’s output also increased by 14.6% each year. This produced capital investment increases that averaged more than 19% annually. (Coal Association of Canada)

After the year 2025, forecasts for the Alberta coal industry drop sharply lower. More downsizing is expected because of the world’s commitment to the Paris Agreement, which calls for reductions of carbon emissions. Numerous nations that once imported coal from Canada have now restricted its use in some way.

At the same time, Alberta plans to phase out coal power by the year 2030.

Much of the downturn, however, is based on the activities of China. Their economy has been purposely slowed to stop it from overheating, which has affected industries like the Alberta coal industry. If China should reverse its position on the Paris agreement, then the industry may grow once again.

Otherwise, the expectation is that a majority of the industry is expected to be phased out in coming years.