The first air purifiers were developed in the 16th century. It began with technologies that were designed to purify the air a person breathed near their nose and mouth, much like an early form of a personal respirator.

From the 20th century on, new ways to filter air have been developed and each new method has transformed the industry. One of the most important developments was the creation of HEPA technologies in the 1940s. By reducing contaminants as small as 4 microns from the environment, pollens, dust, vapors, and other bothersome indoor elements could be removed.

That has helped to build an industry that is stable, successful, and profitable. Much of the air purifier industry is based in the United States.

#1. Air purifier manufacturing is an industry worth about $3 billion in the United States right now. From 2012-207, the industry contracted slightly, seeing an annualized average growth rate of -0.7%. (IBIS World)

#2. About 380 businesses are currently involved in the manufacturing of air purification equipment in the U.S. right now. They combined to provide about 17,000 direct employment opportunities. (IBIS World) 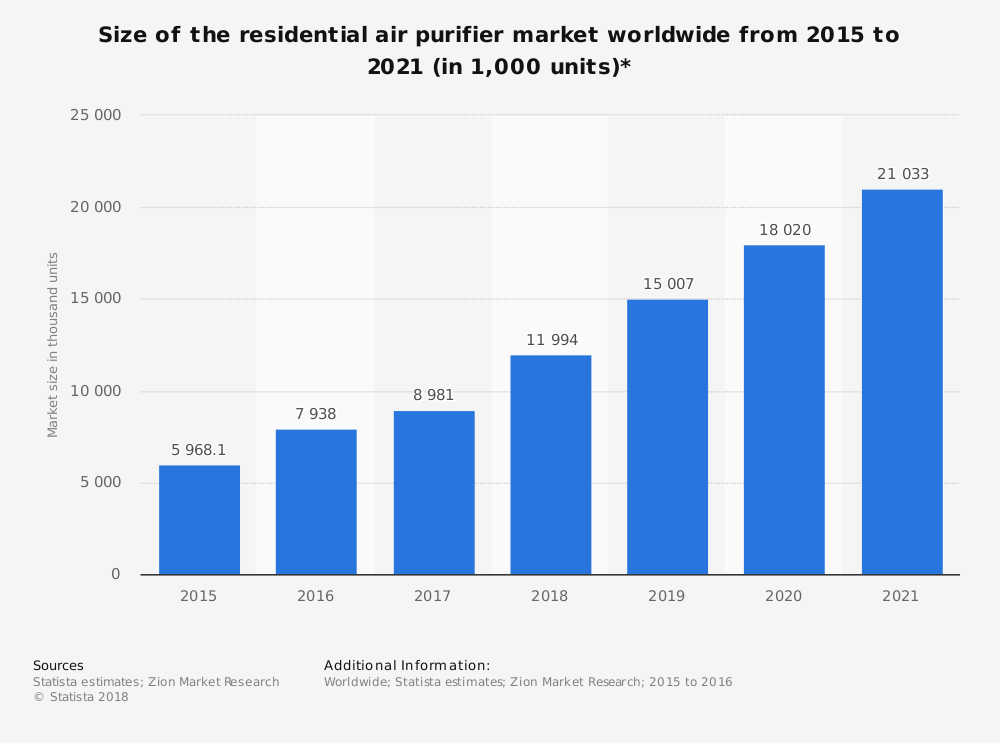 #4. In 2017, about $603.4 million in retail sales was generated by products classified as “air cleaners,” which is primarily represented by the air purifier industry. (Statista)

#5. In 2014, about 5.1 million air cleaners were sold through retail locations in the United States. About 80% of the global market for air purification products is based in the U.S. market. (Statista)

#6. In the United States, there are more than 186 million people living in areas where there is questionable air quality. 60% of people are exposed to ozone or other forms of pollution on a regular basis. (Rabbit Air)

#7. 75% of the residential housing units in the United States have ducted forced-air heat. 63% of them have ducted central air condition. These designs are directly tied to indoor air pollution exposure. (National Institutes of Health)

#8. Just 27% of families who are experiencing indoor breathing issues will attempt to improve them by introducing an air purifier. Eliminating smoking was the most common action (80%), followed by having no pets (54%), and washing bedding in hot water (43%). (National Institutes of Health)

#9. The average person will breathe about 3,400 gallons of air each day. (American Lung Association)

#10. Exposure to pollution in the air contributes to various infections, diseases, and asthma. It can even contribute to lung cancer development. Lung diseases claim the lives of 350,000 people in the U.S. each year. (American Lung Association)

#12. More than 200,000 hospital trips in the U.S. are directly attributed to the air quality found in that person’s home. About 15 million missed school days are attributed to the quality of air found in homes. (Environmental Protection Agency)

#13. About 1 in 6 people have allergy symptoms because of the indoor exposures they encounter from bacteria and fungi found in their home’s HVAC system. (Environmental Protection Agency)

#14. Children are more affected by indoor air pollution that adults because they breathe in about 50% more air per capita for their body weight. (Environmental Protection Agency)

#15. Controlling the exposure of allergens, tobacco smoke, and similar pollutants with the use of an air purifier could prevent up to 65% of the asthma cases that are experienced by school-age children in the U.S. each year. It would also reduce up to 60% of cases of breathing issues caused by biological contaminants. (American Journal of Respiratory and Critical Care Medicine)

#16. The average cost of a whole-house air purifier can be as high as $2,500. Smaller homes can install a whole-house product for about $600. The national average in the U.S. for a whole-home solution is about $1,000. (ImproveNet)

#17. 43% of air purifiers are purchased at discount stores. Another 23.5% of them are purchased directly from the manufacturer. Home improvement stores have the only other major share of sales in the industry, with 11.7% of retail revenues. (Kaz, Inc.)

#21. People spend 90% of their time indoors in the United States, with 70% of that time spent in their own home. That is why 3 out of 4 allergists recommend an air purifier as part of their patient’s overall treatment plan for bothersome symptoms. (Kaz, Inc.)

#22. In the United States, households in the South have a 40% market share of the air purifier industry. The West is the second largest geographic location, with a 25% market share. (Kaz, Inc.)

As the Chinese economy gains more stability, the largest areas of potential growth tend to come from the country’s urban centers. With poor air quality available in Chinese cities, predictions of growth for the air purifier industry reach 80% with some estimates. Higher rates of allergies and asthma may increase sales in localized markets for the industry as well.

There is a growing trend to reduce indoor allergens in the United States and other mature markets, which will help boost the industry as well.