Shrimp are classified as a crustacean. Very tasty crustaceans, if you ask the average person. They are such a popular seafood item that the shrimp industry is one of the strongest seafood segments in the world today. More than 1 billion pounds of shrimp are consumed in the United States each year, with another 4 billion pounds consumed by the rest of the world.

The average shrimp is about 6 inches in length, though they can grow to reach lengths of more than 1 foot. In the wild, they can love for as long as 6 years. The average age of a shrimp that is found at the grocery store is about 6 months.

What is most interesting about the shrimp as a species is that every individual is born as a male. Over time, some become females as they mature. There are 128 known species right now and the average number of legs is 10.

#1. Farmed shrimp account for 55% of the shrimp that are produced for the global seafood market. A majority of this shrimp comes from China, but Thailand, India, Vietnam, Bangladesh, and Brazil are also major contributors. (World Wildlife Foundation)

#2. The average person in the United States will consume about 4 pounds of shrimp every year. (World Wildlife Foundation) 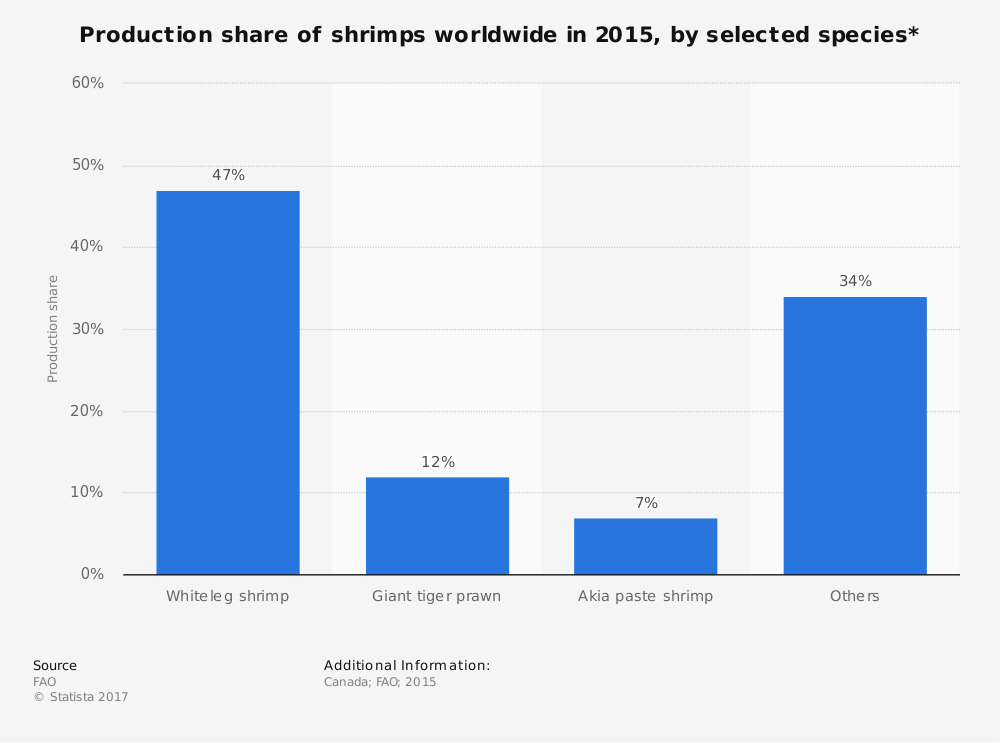 #3. The shrimp industry is the world’s most valuable marine product that is traded. In 2005, revenues from the farmed shrimp segment of the industry reached $10.6 billion. Production of aquaculture continues to grow at 10% each year, which is one of the highest growth rates in any seafood sector. (World Wildlife Foundation)

#4. In shrimp farming, it takes between 3-6 months to raise shrimp that are large enough to be sent to the market. Most farmers are able to grow at least two crops, if not three, each year. (World Wildlife Foundation)

#5. About 80% of the shrimp that are produced through aquaculture are of just two species: Giant Tiger Prawns an Pacific White Shrimp. Because these two species are very susceptible to disease, the shrimp industry walks a fine line between success and failure. (World Wildlife Foundation)

#6. For the countries that do farm shrimp, a majority of their product is exported. Thailand, for example, exports about 90% of its total production value every year. (Seafish Industry Authority)

#8. In 2004, the total production weight of shrimp for the industry exceeded 6 million tons. That corresponds to about 6% of the anticipated total yield that can be found in the world’s waters. The total value of production was $21 billion, with 54% of that value coming through commercial capture. (World Aquaculture Society)

#9. Of the 3.6 million tons of large shrimp that are captured each year, 22% of the supply are tropical shrimp. The other species that are captured typically come from temperate or subtropical waters. (World Aquaculture Society)

#10. For the commercial capture segment of the shrimp industry, about 60 species make it to the market each year. Aquaculture methods only track 20 shrimp species. In each segment, only a handful of shrimp species are actually important to the overall market. (World Aquaculture Society) 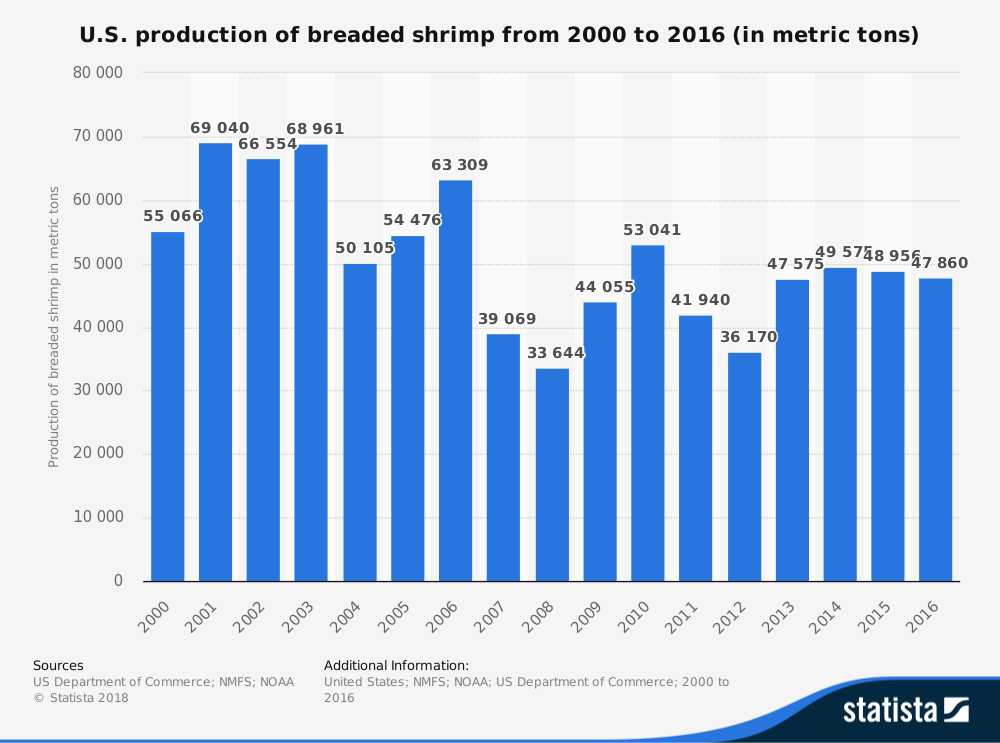 #13. The export value of shrimp creates a significant revenue resources for many countries around the world. More than 125 countries are part of the global shrimp industry as exporters. The total value of these exports was $12 billion in 2004. (World Aquaculture Society)

#15. Up to 60% of the shrimp that are farmed through aquaculture efforts are raised in areas that are converted mangroves. In the United States, up to 90% of the shrimp that is consumed each day is imported. That means farmed shrimp can have a carbon footprint that is 10 times greater than beef. (Oceana)

#17. Indoor aquaculture facilities are the future of the shrimp industry. Using controlled methods, up to 5 harvests per year are possible. At the same time, there is a much lower risk of disease with an indoor facility. (Facts and Details)

#18. Shrimp may be popular, but it is a food product that is very high in cholesterol. A single serving of 100 grams of shrimp may contain over 250mg of cholesterol. (Masters of Trivia)

#19. Less than 2% of the shrimp that is imported to the United States is ever inspected by a U.S.-based regulatory agency. (Rodale’s Organic Life)

#20. Despite the low inspection numbers, up to 35% of the seafood imports to the U.S. that are rejected involve shrimp because they are so filthy. (Rodale’s Organic Life) 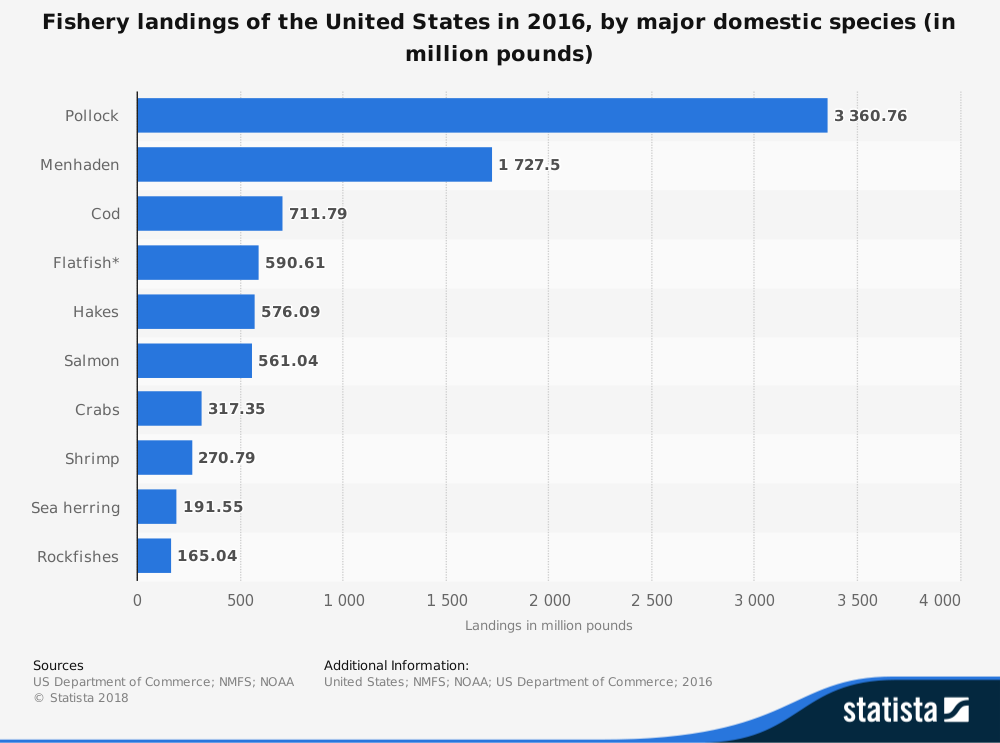 #21. The FDA in the United States have rejected nearly 1,4000 loads of seafood, mostly shrimp, because of salmonella or filth. (Rodale’s Organic Life)

There are some amazing benefits that the global shrimp industry is able to provide to the global economy. There are also some incredible lows. Certain segments of the industry, such as the Thai aquaculture segment, are known hotspots for human trafficking. Workers are exposed to 16-hours shifts, if not longer. Child labor may be encouraged in some regions.

Illness, physical abuse, and other labor violations have been found to be common as well. Some workers have been locked inside their employment facilities for months, if not years, at a time.

It is up to the consumer to ensure that the shrimp being consumed comes from a reputable source. Many shrimp products are directly or indirectly influenced by trafficked workers and purchasing those products only encourages the abusive behavior.

There are above-board, beneficial aquaculture efforts being practiced around the world. Commercial fishermen catch shrimp each year to support their families. Placing a focus on these segments will encourage the industry to continue its rate of expansion while reducing the abuses that have become all-too-common in certain parts of the world.