Dairy experts suggest that a single cow must consume at least three liters of water every day to produce at least one liter of milk. If a farm has cattle which are producing at a high capacity, that means up to 150 liters of water must be available.

When the farming activities occur in the U.S. Midwest or the rainy lands of Europe, that is a figure which doesn’t seem like a challenge to reach. When you’re talking about the Saudi Arabia dairy industry, however, where the average annual rainfall is just 2.3 inches per year, that seems like an unlikely premise.

The dairy farms here are following the model that California dairies established decades before. If you can import enough water and feed, then you can house a large herd on a small land footprint. Some dairies in Saudi Arabia manage 1,000 cattle on just 40 acres.

#1. Almarai is located at Al Kharj, which is about 50 miles south of the capital Riyadh. They manage a herd of 67,000 dairy cattle each year, producing approximately 2.5 million liters of milk per day. That’s double the average that European farmers are able to deliver. (CNN)

#2. The total dairy herd for Almarai totals 135,000 cattle over several different farms. Even though desert temperatures can often reach 50 degrees Celsius, the Holsteins kept on farms are kept indoors to maintain comfort levels at half of the outdoor temperature. (CNN) 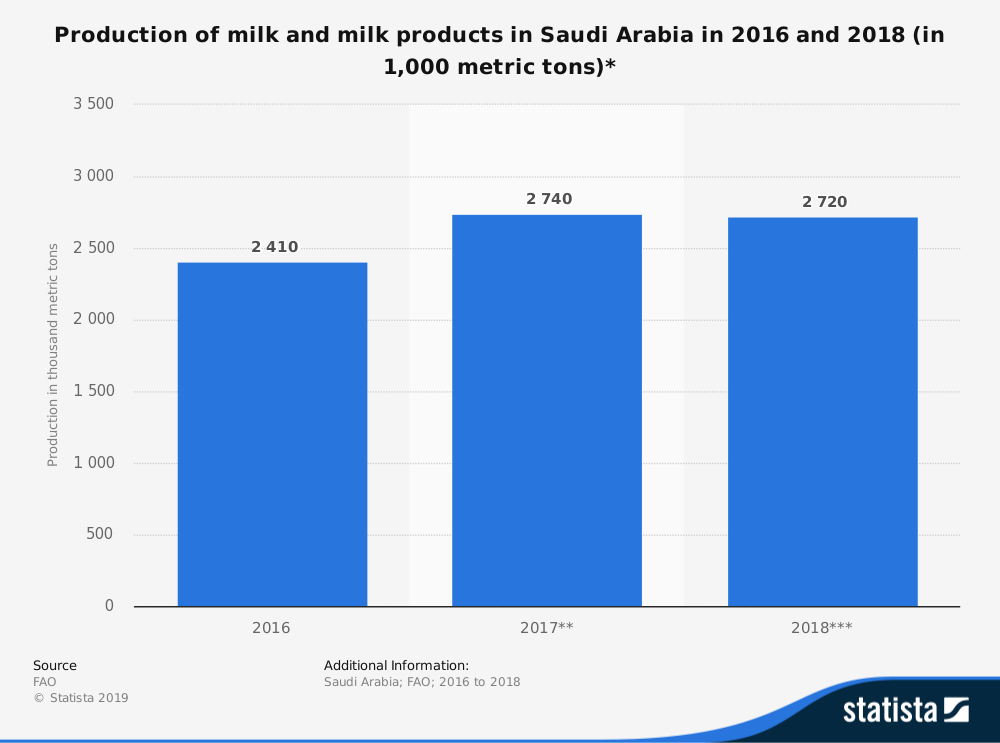 #3. Almarai has a fleet of 1,000 refrigerated tankers that deliver dairy products to over 55,000 stores across six of the Persian Gulf nations. (CNN)

#4. The cows in Saudi Arabia are milked four times per day, using a 75-unit parlor which allows for a complete rotation in as little as 5 minutes. (Agriland)

#5. The starting annual basic pay for workers that are employed in the dairy industry through a significant supplier like Almarai is $55,000 per year, paid in tax-free monthly installments. Severance pay increases each year as well, so after 8 years of employment, you can walk away with a full year of salary. (Agriland)

#6. The employment package for workers with Almarai includes 97 days and holidays, along with six return flights from your starting point or somewhere else if your home is outside of the country. (Agriland)

#7. About 2.74 million metric tons of milk are produced each year by the Saudi Arabia dairy industry. (Statista)

#8. The average cow in Saudi Arabia produces 10,133 liters of milk per year. The only other country where the average is about 10k is Israel, at 10,035 liters of fluid. The United States is fourth on this list, at 9,314 liters. (FAOstat)

#9. The Middle East and Saudi Arabia are grouped in with Asia for statistical purposes of milk production. They represent 21% of the available product. Europe produces 42% of the world’s milk, followed by the Americas at 29%. (FAOstat)

#10. Exports of milk products from the Saudi Arabia dairy industry dropped sharply in 2018, experiencing an 18.3% reduction in revenues. Only Brazil (42%) and Algeria (22%) saw steeper revenue contractions for the year. (Dairy Market Review) 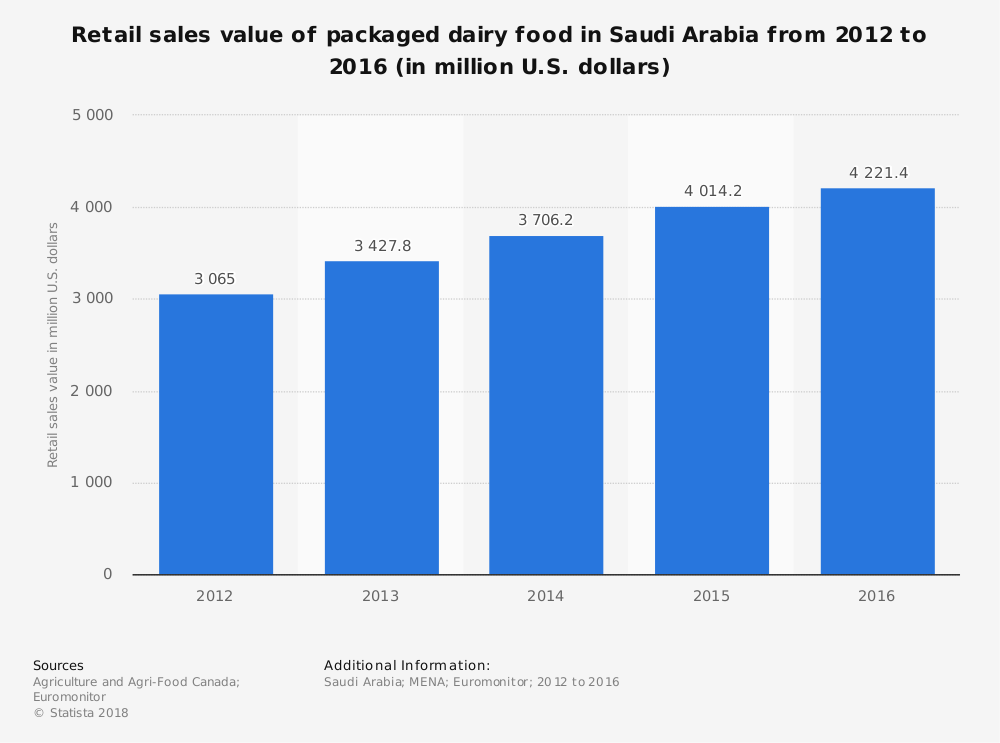 #11. The average price of dairy exports in 2017 was up 31% from the year before, with the international cost of butter per ton rising by 66%. (Dairy Market Review)

#12. Saudi Arabia imported over 3 million tons of milk in 2016, making it the world’s fourth-largest purchaser of products. They are expected to reduce import levels by more than 5% when the 2017 final figures are released. (Dairy Market Review)

#15. The Saudi Arabia dairy industry also imports over 158,000 tons of cheese each year for consumption, with their purchases rising 3.8% from the year before. ((Dairy Market Review)

#16. Saudi Arabia does make it into the Top 6 for cheese exports, selling about 129,000 tons in 2017. That was a 1.5% decrease from the year before. Only the United States saw a strong year in this dairy category, with their exports climbing by more than 18%. (Dairy Market Review)

#17. Saudi Arabia also imports over 100,000 tons of WMP each year, although this figure decreased by over 18% from the year before. (Dairy Market Review)

#18. The total number of dairy ingredients consumed in Saudi Arabia was 253,000 tons in 2015. About 90% of these items are imported, with most purchases coming from New Zealand, Germany, Australia, or The Netherlands. (Irish Food Board)

#19. There is a total of 700 employees from 14 different nationalities working for Almarai, all of them men, as cultural norms prohibit women from living or working at the facilities. (The Bull Vine)

#21. The top farm under the Almarai umbrella is currently producing 14,200 liters at current levels. (The Bull Vine)

Although the dairy industry in Saudi Arabia is automated, there are real concerns about water access which will develop within the next decade. The high yields produced by farms like Almarai do create the potential for high profits and food access, but critics suggest that a significant price must be paid eventually.

Irrigation pivots of Al Kharj create patches of green in the brown sands of the desert. Four decades ago, the underground stores of water were estimated to be over 500 cubic kilometers. That would be enough to fill Lake Erie if it were completely empty.

About 80% of the aquifers in the region are now depleted. With virtually zero rainfall available to help replenish them, governments are phasing out crop production to focus on dairy work as a way to try limiting water.

One way the Saudi Arabia dairy industry may be trying to counter this issue is to take water from other locations. Investors have acquired large tracks of land along the Nile River, and have started to relocate local populations. The theory is that the water could then be shipped to farmers who are focusing on milk production.