In recent years, the remote sensing industry has merged with the commercial satellite imagery industry, allowing all of us to have access to basic data about our planet. In the past, high-flying aircraft would provide these services. Today, much of the industry can be automated or operated remotely.

In 1999, about 1% of Earth’s landmass was being photographed at a level of 0.5 meters. It created so much data that humans couldn’t analyze the information being relayed to them. Back then, this data was stored on 500 GB drives. Now the information exceeds what can be stored on 2 TB drives on a daily basis.

The development of the remote sensing industry has been unprecedented from an observational standpoint. Only now are we beginning to learn the true value of what this industry can provide in multiple ways.

#2. In 2015, the space-based remote sensing industry segment had a value of $3.3 billion. Another $1 billion in revenues is expected to be generated by this industry by 2022. (Directions Magazine) 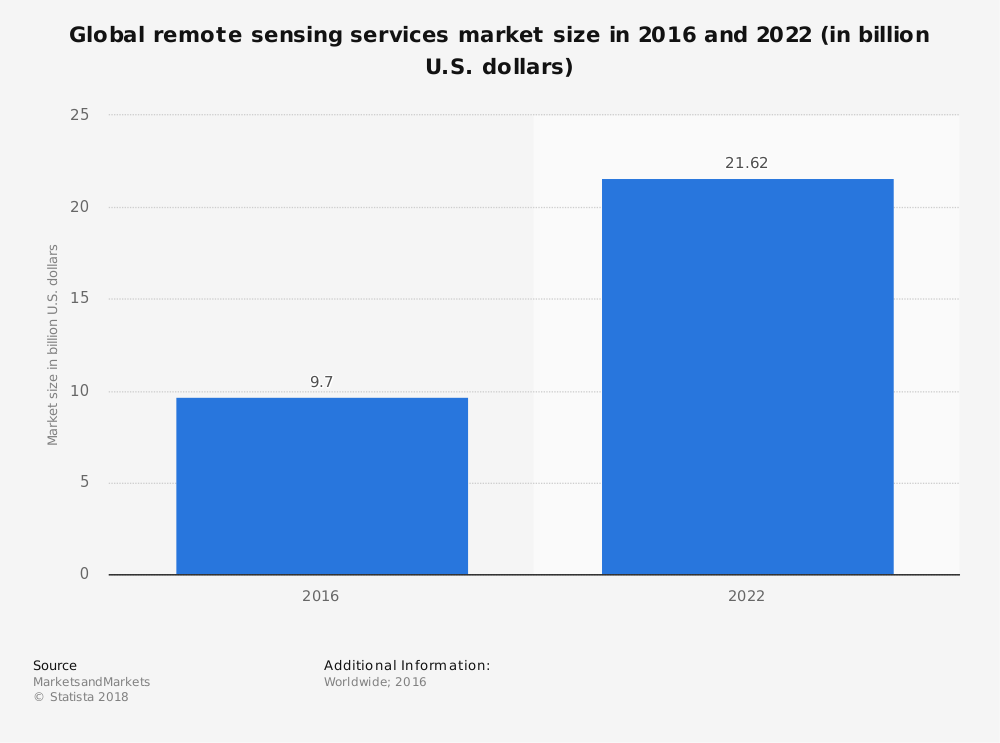 #6. In 2015, venture capitalists almost double the amount of cash that was invested in the industry compared to the past 15 years combined. SpaceX led the way with $1 billion in investments, followed by OneWeb with $500 million. (IEEE Geoscience and Remote Sensing Magazine)

#8. 37% of global space economy revenues are based on internet needs. 19% is used for ground equipment applications, while 17% is utilized by the government. (Geospatial World)

#9. 205 of the private space economy is dominated by satellite launches. 18% is generated by the manufacturing sector. The other top contributors are Earth observation (14%), satellite internet (13%), and asteroid mining (5%). (Geospatial World)

#10. 21% of the remote sensing satellites in orbit are directed toward environmental monitoring. (Geospatial World)

#11. 40% of the satellite imagery that is produced by the remote sensing industry is purchased in North America. Asia purchases 20% of the data that is available, followed by Europe (18%) and the Middle East (10%). (Geospatial World)

#13. The European Space Agency has archived more than 1.5 perabytes of Earth Observation data since it began collecting it. They expect to exceed more than 2 perabytes of data in the coming years. (Institute for Defense Analyses)

#14. The average amount of archive growth achieved by NASA’s Earth observation activities is 1.7 TB per day as of 2011. (Institute for Defense Analyses)

#15. Since 2007, remote sensing revenues have been rising steadily, reaching more than $1.4 billion for the first time in 2013. In 2007, industry revenues were just $400 million. (Institute for Defense Analyses)

#16. Since 2008, the United States has been offering its Landsat data collecting from remote sensing activities for free. That has made it difficult for commercial entities to compete with similar products. (Institute for Defense Analyses)

#18. In 2014, there were 23 total worldwide commercial orbital launches. The United States was responsible for 48% of the launches, followed by Europe with 26% of total launches. Russia had 4 commercial launches, while India performed just 1. (Institute for Defense Analyses)

#19. 412 total payloads were launched by the United States, with 34% of them involving military customers. 47% involved institutional customers. (Institute for Defense Analyses)

#20. 31% of the launches performed by Russia are funded by private customers. 42% of their payloads are domestic, compared to 92% of U.S. payloads. (Institute for Defense Analyses)

#21. In 2014, there were 90 medium or large satellites that were launched into orbit. 20 of those satellites were competitively awarded through the international market. 9 of those 20 satellites were won by SpaceX. (Institute for Defense Analyses)

The remote sensing industry has seen incredible growth over the past 20 years. Cost, which was the primary barrier to entry for the industry for so long, has been reduced by over 90% since the 1980s. That has made it reasonable for the private sector to get involved with this industry, which used to be a government-funded option only.

That is why venture capitalists have been flooding the remote sensing industry with lots of cash since 2015. The return that these investments will bring, however, is still up for debate.

Although the defense sector has moved away from being the primary provider of remote sensing services, they are still the primary customer of this industry. New applications for remote sensing products have been slow to develop. The need for high-resolution images is a niche that the average household has a limited need for personal use.