The African Elephant is one of the world’s most majestic land creatures. These animals have been shown to have incredible intelligence, great social capacities, and even long memories. Their behavior could be described as “human” in many aspects, including their ability to apparently feel grief.

In 2012, it was estimated that there were about 434,000 African elephants still living successfully in the wild.

1. A vast majority of the elephants that were found in the last survey were living in Southern Africa.
2. Only 7,000 elephants were counted in all of western Africa.
3. Although the illegal killing of elephants for meat and ivory are the most commonly publicized threats to these large animals, human conflict, habitat loss, and land use pressures are equally detrimental.

Takeaway: As humanity continues to spread its influence, there is simply less land that is available to these elephants. Conflicts that humans have with elephants are posing a serious challenge to the animals that are allowed to free range as these creatures can be extremely protective of their home territories. Poaching levels also increased in all areas and the proportion of illegal killed elephants out of that number topped 50%. Ivory levels have reached their highest trading values in 16 years, which will almost certainly encourage poachers to continue their efforts.

How Are The African Elephants Faring?

1. For most elephant mothers, a single calf is born every 2.5 to 9 years, coming at the start of the rainy season, after a gestation period of nearly 2 years.
2. Young elephants may need to ween for up to 18 months and some continue to nurse for up to 6 years.
3. The average lifespan of an elephant in the wild, when left alone by humans is estimated to be about 70 years.
4. A male elephant must reach the age of 20 in order to be able to successfully compete for mating.
5. It is believed that up to 5 million African elephants were in the wild as soon as the 1940’s.
6. In Kenya, the wild African elephant population plummeted by over 80% between 1973 and 1989.
7. In the 1980’s, it was estimated that a minimum of 100,000 African elephants were being killed per year across the face of the continent.
8. In a single decade between 1979 and 1989, half of all Africa’s elephants were lost to the ivory trade.
9. Elephants are a keystone species and crucial to Africa’s forests and savannas.

Takeaway: The problem that the elephants are facing isn’t a lack of resources, but a lack of respect. They are large animals that offer a lot of meat, most certainly, but often poachers just take the tusks and the ears of these large creatures and then leave them to die. With so many herds being lost and with birth rates naturally low for this species, the wild African elephant is definitely an endangered species. Despite this, illegal killings continue to increase in both subspecies of this massive animal. The issue is one of value. Until more value is seen in keeping these animals around with us and finding a way to co-exist, more value will be seen in the ivory, meat, and other products that humans can harvest from this giant creatures.

What Are The Threats to African Elephants?

1. Most of the ivory leaving African was taken illegally and it is estimated that 80% of the ivory market today comes from poached elephants.
2. A convention in 1989 banned the international trade of ivory to stop poaching and some African nations saw steep declines in killings, but poaching continues because of black market trading.
3. Because there is an unequal distribution of elephants covering the African continent, conservation tactics must be different in these regions.
4. Most elephants range outside of protected areas and into agricultural lands that were once considered unsuitable for farming, which puts these animals at risk.
5. The risks are high in elephant-human conflicts as a farmer can lose their entire livelihood in just one elephant raid. An entire elephant herd, on the other hand, can also be lost with a well-armed farmer.
6. It is estimated that over 100 elephants are killed every year in retaliation because of their “problematic” behavior.
7. The greatest threat to the African elephant population, however, would be a continued inability to build capacity within the current protected areas that exist for the herds.

Takeaway: Many people in the Western world picture an elephant who has been working in a circus or is in a pen at the zoo. There is a big difference between a wild elephant and a domesticated one, but human-elephant relationship is dangerous either way. Until higher capacities can be built into the protected areas so that there are enough replenishable resources for multiple herds to be able to co-exist, there will still be conflicts and retaliation happening – on both sides. Reducing the black market trade of ivory and other elephant parts will help to limit illegal activities and promoting awareness and modern management methods will help to stop fatalities from occurring. That way the elephant population can continue to increase without putting humans at risk.

1. 35 villages in 4 countries have implemented practical elephant repellent measures to protect crops, including the installation of new watering holes.
2. Park guards and other professionals have received new training to protect herds in 17 range states.
3. Tourism wildlife companies have helped to bring in revenues to replace ivory trading revenues.
4. Anti-poaching staff have started patrols in 5 protected areas.

Takeaway: Although changes are happening, the African elephant population is still dropping. Will these measures work? Only time will tell. Until then, the conflicts between humans and elephants in Africa will continue to wage on. 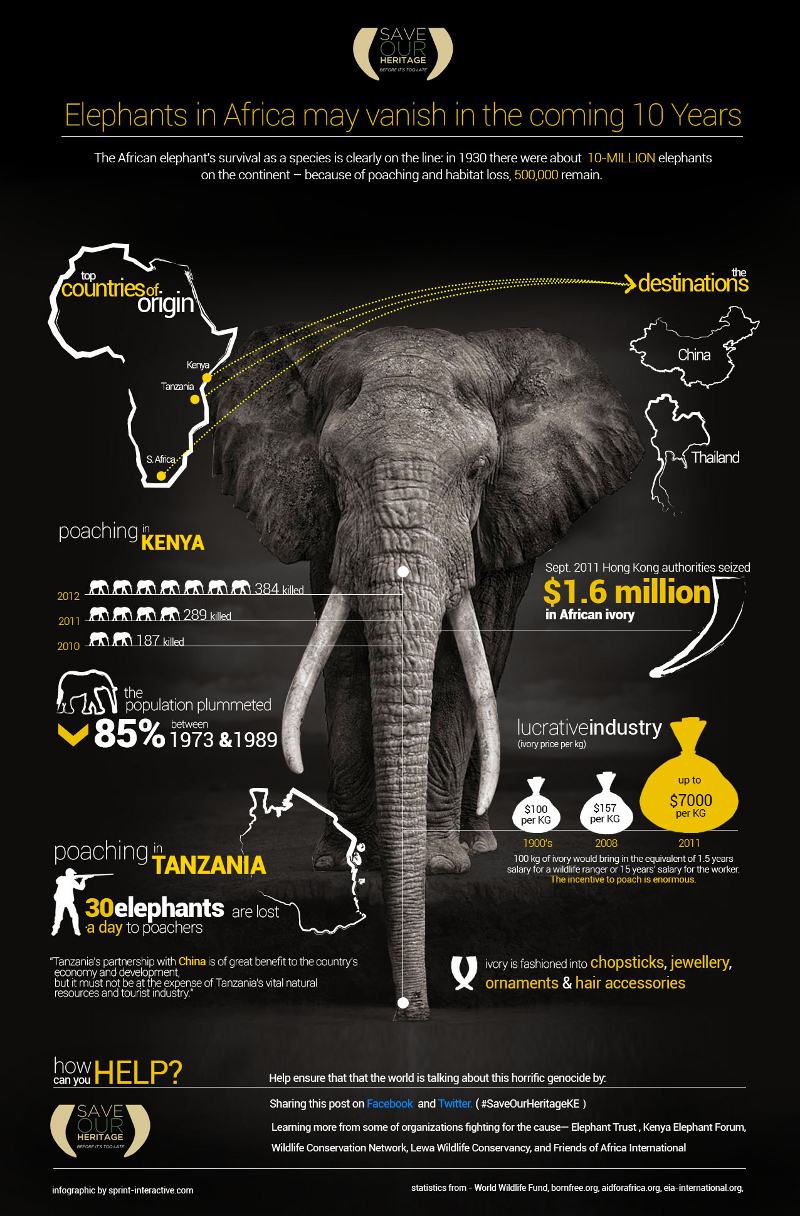