The cotton industry in India was first established during the Mughal Empire. Ruling from the 16th century to the 18th century, the empire helped the industry flourish through a series of agricultural reforms, including the introduction of a currency system that favored cash crops like cotton.

Cotton was already being grown in India before this time, however, with evidence of dual-roller gins producing cotton products for the industry as early as the 12th century.

Although it competed on a global level early on, the rest of the world mechanized in the 19th century and the Indian cotton industry did not. Americans began to dominate the global cotton industry. India moved from being an exporter to an importer. It wouldn’t be until Mohandas Gandhi tied self-determination to cotton production with the Khadi Movement that the industry would experience a resurgence.

#1. In the 2013-2014 growing season, India exported $9.92 billion worth of cotton, making it the second-largest textile importer in the world. (Ministry of Commerce and Industry)

#2. The Indian cotton industry was the third-largest supplier of clothing and textiles to the United States in 2013. About 6% of the total imports in this category to the U.S. originated from India. (Ministry of Commerce and Industry) 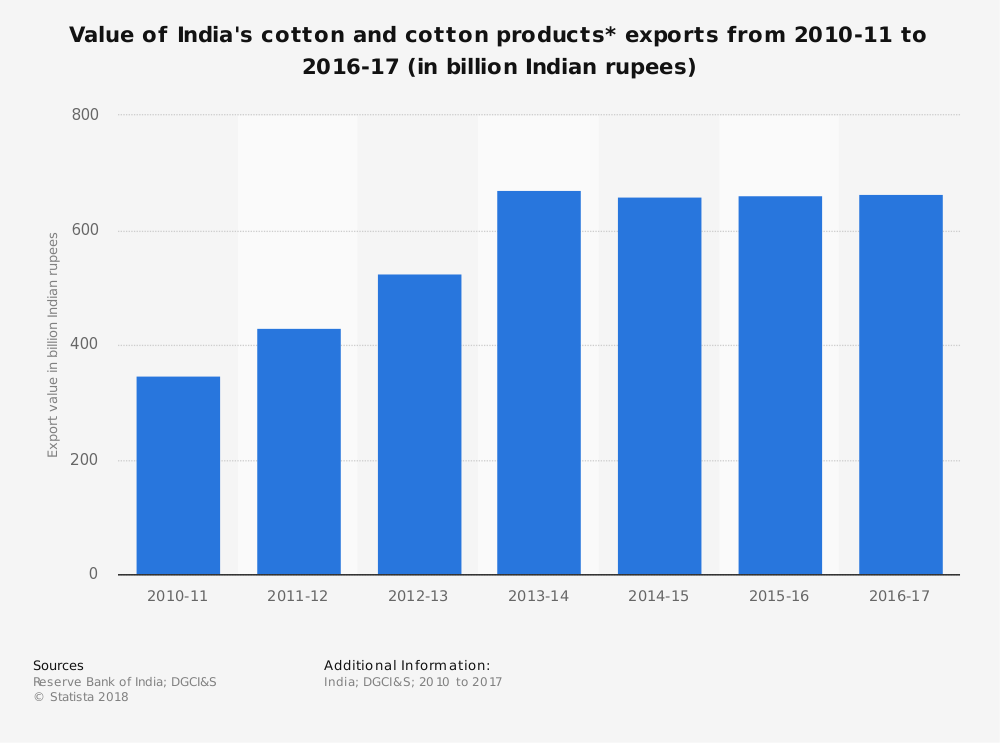 #3. China is the largest importer of cotton products from India, followed by Bangladesh, Egypt, and Taiwan. (Ministry of Commerce and Industry)

#4. During the 2013-2014 season, cotton yarn production by the Indian cotton industry grew by 2%. At the same time, cloth production from mills and power looms increased by 5% and 6% respectively. (Ministry of Commerce and Industry)

#5. The Indian textile industry contributes 11% of the annual industrial output that is available nationwide. It contributes 4% to the GDP and 12% to the total export earnings available to India each year. (Ministry of Commerce and Industry)

#6. The total cultivation of cotton in the 2013-2014 growing season was 37 million bales, each weighing 170kg. (Ministry of Commerce and Industry)

#7. The textiles industries of India employ about 45 million people directly. Another 20 million employment positions are indirectly supported by the industry. The total value of the industry is about $40 billion annually. (India Brand Equity Foundation)

#9. Cotton production is expected to rise by 9.3% by the end of 2018 from the previous year, with a total area of cultivation expected to increase by 7% by this time. In total, about 11.3 million hectares of cotton are expected to be planted. (India Brand Equity Foundation)

#10. In total, there were 103.17 million bales of cotton produced around the world in 2016. That means the Indian cotton industry is responsible for about 30% of the new cotton that became available in the past year. (Statista) 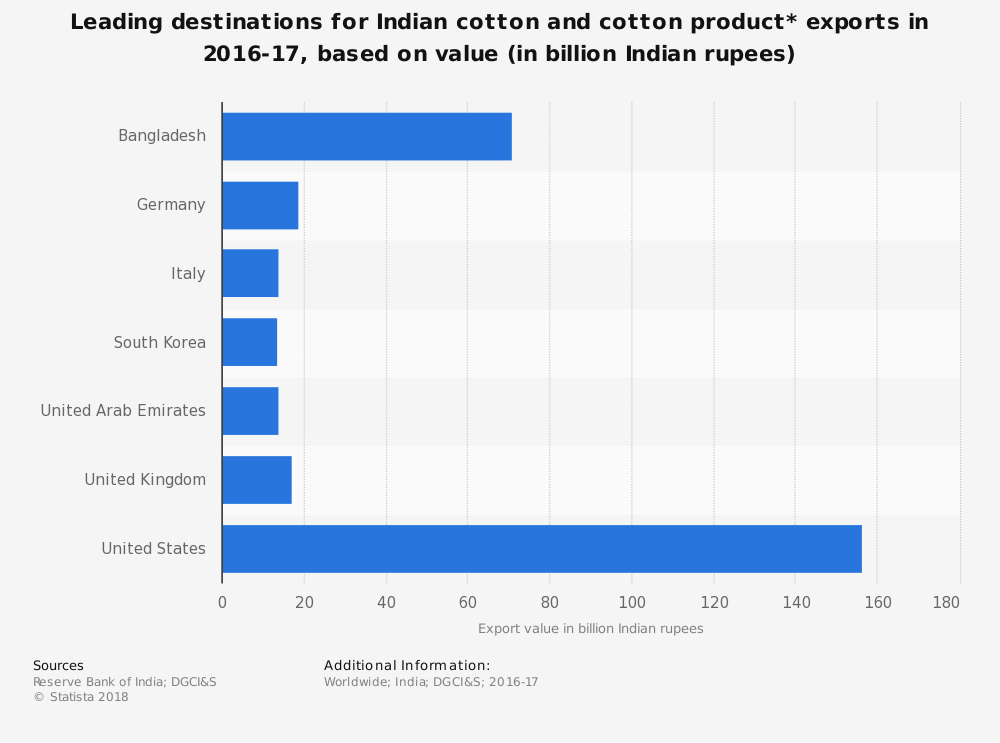 #12. Gossypium hirsutum represents about 90% of the hybrid cotton production that currently occurs within the industry. In total, there are about 75 strains that are grown by the industry. 98% of total production, however, comes from just 25 varieties. (Indian Mirror)

#13. About 10% of the employment industries that are available through the Indian cotton industry are farming positions. (Indian Mirror)

#14. In 2016, the total value of cotton yard that was produced by the Indian cotton industry was $3.6 billion. Exports of cotton products, including raw cotton, fabrics and madeups, totaled $1.9 billion, $2.1 billion, and $5.2 billion respectively. (India Brand Equity Foundation)

#15. About 23% of the cotton grown for exports goes to the United States each year. China is the second-largest importer of cotton, with a 14% share of available product. Bangladesh holds a 9% share of Indian cotton exports. (India Brand Equity Foundation)

#16. 39% of the cotton crop each year goes toward ready-made garments. Another 34% are dedicated toward textiles. (Cotton Association of India)

#17. The Indian cotton industry is responsible for about 10% of the world’s capacity of shuttleless looms, with about 100,000 used in production capabilities. 46% of the world’s power looms are also used by the industry. (Cotton Association of India)

#18. In 2013, India processed a total of 8 million tons of textile fibers. That accounts for about 9% of the total global fiber consumption for the year. Out of this figure, 5.1 million tons were from cotton, which was a 22% global consumption share. (Cotton Association of India)

#19. India produces about 63 billion square meters of fabric each year within the textile industry. 54% of this fabric is composed of 100% cotton products grown domestically. Another 14% is of a cotton-blended fabric. (Cotton Association of India)

#20. In the past 20 years, the government of India has invested more than $55 billion into the textile sector, which is responsible for 40% of the current spinning capabilities present within the cotton industry. (Cotton Association of India)

As traditionally dominant regions have experienced declines in their cotton industry, the economic factors of India have created new opportunities. With lower labor costs, high-quality cotton to process, and mechanization to support the industry, the Indian cotton industry has seized their moment in the past 20 years.

Another opportunity is on the horizon. Egypt has seen a decline in their cotton industry because of over-branding on inferior products. With cotton exports down from Egypt, the Indian industry has an opportunity to continue building toward being the global leader in this commodity.

There are still many challenges which must be faced for the industry to find success. It must continue to focus on modernization and production, as once again, the rest of the world is beginning to leave the industry behind. Efforts to improve the availability of power looms, while reducing the transportation costs of getting domestic cotton bales to processing centers, will help to support the industry’s future.